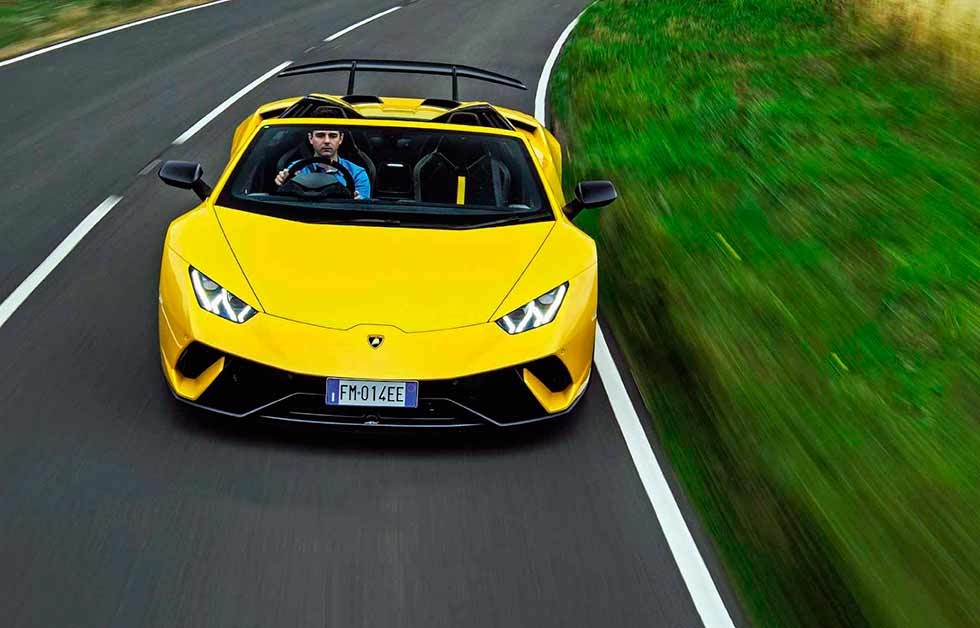 Somehow the Italians have mastered the art of successfully hacking the roofs off hardcore, track- honed supercars. Whereas the thought of a convertible Porsche 911 GT3 991.2 has you thinking ‘Nein danke.’ the mere mention of the drop-top Ferrari 458 Speclale Aperta has you yelling ‘Si, molto buona!’ at the wind-in-the-hair thrill of it all. So it came as no surprise when Lamborghini revealed it had lifted the lid on its Huracan Performante. I mean, who wouldn’t want to get closer to that magnificent V10?

Compared to the palaver that is going topless in an Aventador Roadster, lowering the hood on the Huracan is child’s play, with nothing more taxing than the prod of a button required to stow the roof. The electrically powered set-up can be opened or closed in less than 20 seconds, even when travelling at speeds of up to 30mph – there are no 15-minute stops by the side of the road while you grapple with uncooperative panels and a head-scratching storage system. The addition of a folding roof has resulted in a 125kg weight increase over the coupe (although at 1507kg dry it is 35kg lighter than the standard Spyder), with most of the increase In mass coming from the extra chassis strengthening needed to offset the rigidity reduction caused by the roof removal.

The rest of the car is largely unchanged, save for some subtle heft-compensating tweaks to the springs and adaptive dampers (the latter a £5148 option, which is a bit of a cheek on a £238k car). This means you get the same 631bhp 5.2-litre V10 driving all four wheels through a seven-speed twin-clutch transmission, plus the same three driver modes (Strada, Sport and Corsa; there’s no Ego mix ‘n’ match option here). Also present and correct is the ALA (Aerodinamica Lamborghini Attiva) active aero, which uses moveable flaps in the nose and engine cover to balance drag and downforce. Less subtle but equally effective is the huge rear wing that’s made from the same strange marble-effect compressed carbonfibre strands that are used throughout the Performante. Finally, there’s the Direct Steering variable-ratio rack that increases alertness as you ramp up the driver settings.

Unless it’s raining then it’s top down all the way with the Performante Spyder, an approach that makes sense the moment you flick open the jet fighter-style trigger protector and prod the start button beneath. There’s a short whir as the starter spins, then over your shoulder the VI0 catches and crackles into boisterous life. Even with the windows dropped you never feel this close to the action in the coupe.

For the first few hundred yards Strada mode is the order of the day, but just so you can check it works. Surprisingly supple ride? Check. Engine note that’s pure supercar but muted enough for daily duties? Check. Twin-clutch gearbox that shuffles ratios with the speed and smoothness of a Las Vegas croupier handling a deck of cards? Check. Given its hardcore tendencies this car really is as easy to live with as an Audi R8, unyielding and thinly padded fixed-rake seats aside.

‘It feels explosively rapid at any speed and in any gear’

But of course the mode you really want to use. all the time, is Sport. A flick of the steering wheel-mounted control releases the Performante’s potential. Instantly the exhaust note changes as valves open, uncorking the sublime 5.2-litre V10. My, this is a fabulous engine. Low down there’s a booming, bassy rumble that resonates through the whole car and into your very core. Push on and the timbre changes to that of an angry metallic howl that’s got more than a hint of mid-’90s F1 car as it homes in on the 8500rpm red line, the TFT rev counter dementedly flashing yellow to red.

Lamborghini reckons the Spyder is a couple of tenths slower to 62mph than the coupe, but a 3.1sec time is hardly shabby, and with naturally aspirated torque everywhere and throttle response so sharp it threatens to cut your right foot to ribbons, the Huracan feels explosively rapid at any speed and in any gear. Speaking of which, that seven-speed ‘box flicks between ratios so quickly and cleanly that you barely feel the shifts on the way up, while downchanges are met with a beautifully timed blip of the throttle and a salvo of window-rattling pops and crackles on the overrun.

So intoxicatingly brilliant is the engine that it’d be easy to overlook the Lambo’s other dynamic highlights. The extra weight might have blunted the Performante’s ultimate performance – you’d have to be at a track and on the very ragged edge to notice – but it has helped keep the body incredibly stiff. Over really gnarled roads in the ultra-firm Corsa mode there’s just the merest hint of flex, but the rest of the time it’s rock-steady. As a result you have the confidence to push the car hard and revel in its exhilarating balance and agility. The steering, oddly slow when ambling, becomes hyperactively quick, while the grip and traction are simply sensational. Equally impressive is the body control. The low-roll handling is a given, less expected is the spooky deftness with which the dampers effortlessly deal with ruts, crests and potholes, allowing you to pick apart a twisting section of road at an astounding rate and with delicate precision, only really nasty cambers causing the steering to buck and writhe in your hands.

It’s a reminder that the Huracan has a playful side, too. Yes. the steering lacks a little feel, but there’s genuine adjustability and interaction here, the rear of the car gently moving about under heavy braking (the carbon-ceramics are tireless and blessed with a perfectly progressive pedal), eager to help get the nose pointing in sooner for a straighter exit. Get greedy with the throttle too early and the nose will push wide, but have a lift or be patient and you can have the car exiting a bend with just a whiff of oversteer, the trick four-wheel-drive system cleverly balancing grip and slip.

It’s a thrilling and totally addictive experience. And it’s made only more so by the car’s decapitation, because losing the roof adds an extra layer of involvement. It’s not just the noise of that wonderful engine, it’s the gentle squealing of the brakes as you slow for a corner, the constant fizz and buzz of the tyres over different surfaces, and the fissssss of air being sucked into the V10 every time you squeeze the throttle. Then there are the smells and the panoramic views, too…

No, the Performante Spyder isn’t ultimately quite as focused as the coupe, but we’re talking gnat’s whiskers here and it adds even more drama to an already adrenaline-fuelled package. If the fixed-head car is a widescreen, surround-sound machine, the Spyder delivers the full IMAX experience.

+  That engine, the handling; easy to live with, too

–  Unyielding seats, not for the shy and retiring

Above: no roof, but the Spyder maintains all the visual attitude of Its hard-top sibling. Far left: thinly padded seats take the edge off otherwise impressive usability. Left: driver modes are accessed by a switch on the steering wheel. Above: with the top down the glorious 5.2-litre V10 feels even closer than in the coupe. Right: active aero supplemented by fixed rear wing.

“It’s thrilling and addictive, and losing the roofadds an extra layer of involvement”