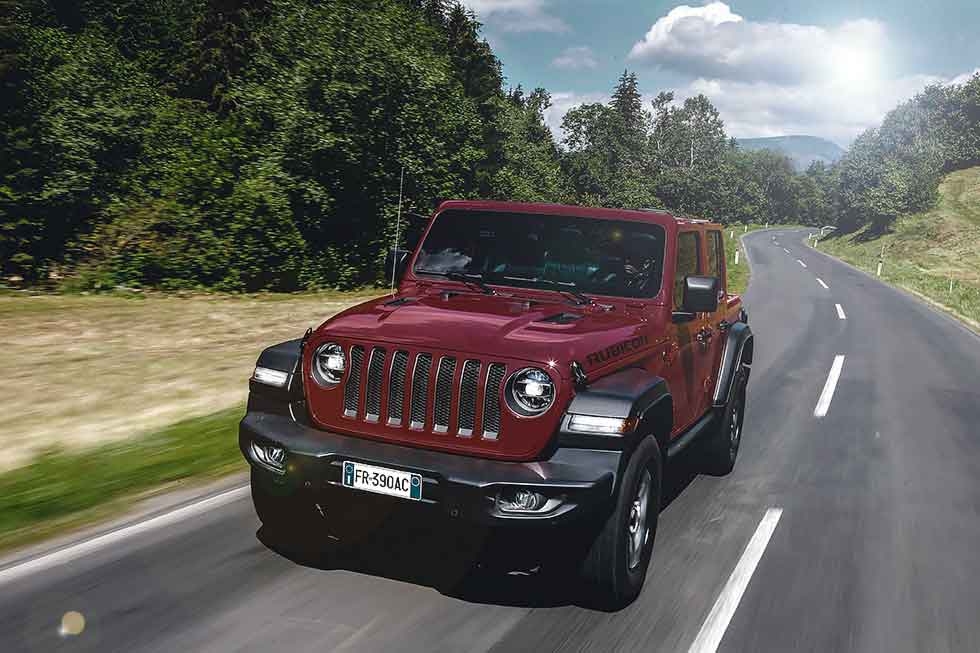 Jeep and no longer nasty The latest visual descendant of the wartime original proves to be surprisingly civilized. Words James Batchelor.

While journalists scurried under the awning to escape torrential rain, Jeff Hines walked onto the soaking stage with confidence. You could even call it a swagger. Jeep’s new European boss was here to launch the latest Wrangler, and wasn’t about to be stopped by Austrian mountain mizzle.

The Wrangler leads Jeep’s revival, along with a new Compass mid-sized SUV, revised Renegade and Grand Cherokee. With a signed cheque from outgoing Fiat Chrysler Automobiles CEO Sergio Marchionne to improve sales, its entire range is being renewed. By 2022 there will be a new baby Jeep below a second-gen Renegade, a refreshed Compass, new Cherokee and Grand Cherokee, a pick-up, and a new Range Rover rival that revives the Grand Wagoneer epithet. All diesels will be replaced by plug-in hybrids, and a range of electric cars will sweep in. No wonder Hines was swaggering. Out with the old, then. Yet the new JL Wrangler’s body looks uncannily similar to the outgoing one, though it’s longer and wider – rather like the new Mercedes-Benz G-class. A ladder-frame chassis and live axles remain, yet it’s 90kg lighter than of old.

Circular headlights and a seven-slot grille mean the new car still draws inspiration from the ’45 CJ, the windscreen can be folded flat, the doors are easily removed and there are three types of roof available – an electric fabric roll-back, a soft zipperless option, and ‘Freedom’ panels that unclip and put you straight into California surf mode.

The dashboard mimics the 1986 Wrangler YJ’s in design but not in quality, because the new JL is easily the best-built Wrangler yet. There are soft-touch plastics, which seem well screwed together, and a large touchscreen infotainment system. The range starts with a Sport and peaks, via a posh Sahara, with a ridiculously rugged (if slightly camp) Rubicon model.

The Yanks get the JL with a throaty 3.6-litre Pentastar V6. Over here we get either a 268bhp, 2.0-litre petrol turbo with four cylinders or one of FCA’s ubiquitous 197bhp 2.2-litre diesels (a PHEV is coming); an eight-speed auto is the only gearbox choice. Fire up the diesel, ease the lever into ‘D’ and the biggest improvement is how civilised it feels. Yes, the steering is still slow and vague and the bluff shape means it’s pretty rowdy, but the ride is a lot more supple than before. Indeed the whole car is far more comfortable, and it’s easier to drive, too.

The Rubicon undoes a lot of the new Wrangler’s on-road improvements. Its offroad tyres and paraphernalia (a 4.0:1 lowrange gear ratio, heavy-duty axles, front and rear differential locks and the ability to disconnect the front anti-roll bar) introduce a pattery ride, yet more road noise and vaguer steering – but it redeems itself in the rough stuff. For now, at least, the Wrangler Rubicon is the king of climbing.

Despite its easier-to-live-with character, the hardcore, old-fashioned Wrangler will confuse SUV buyers and delight Jeepsters in equal measure. Prices, yet to be confirmed, are expected to kick off at £44,000 and rise past £55,000. Hardcore is costly.