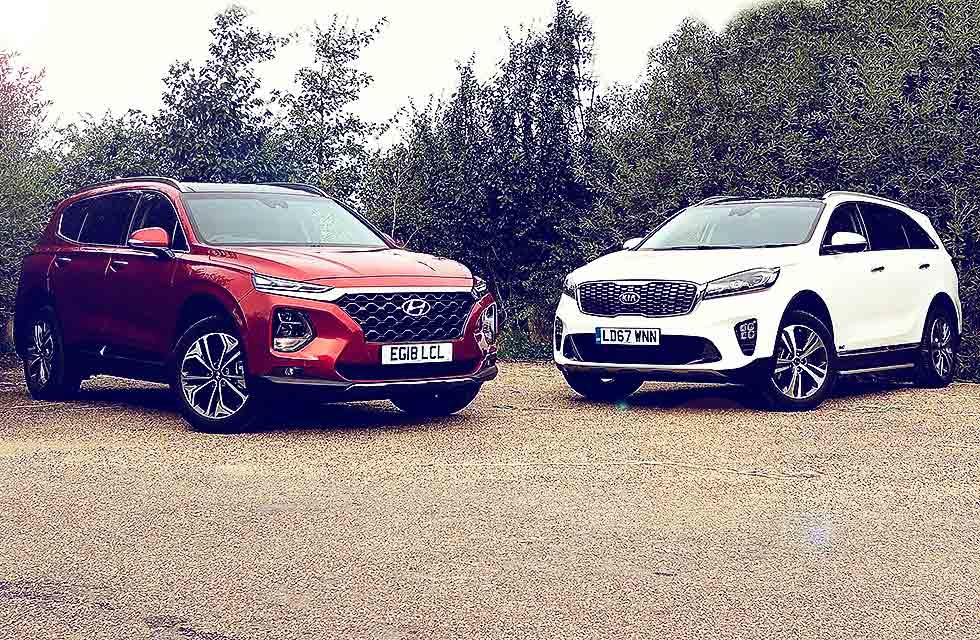 Santa Fe or Sorento? Which one wins our SUV showdown. Sister cars fight it out in this month’s SUV grudge match. Can the Hyundai Santa Fe beat the Kia Sorento?

FAMILY RIVALRY  Close cousins square up for a fight in this head-to-head between related, but rival SUVs. Both hail from South Korea, but which one woos British buyers more effectively? We check them out.

Here’s a real needle match. The opponents in this month’s twin test come from two sides of the same family. Hyundai and Kia are sibling Korean manufacturers with shared parentage, so they have much in common. Both the Hyundai Santa Fe and the Kia Sorento are built on home territory in South Korea, although in different factories. Both are five-door, seven-seaters, with the availability of four-wheel-drive. Both have the same base under-structure and identical 2.2- litre diesel engines, as well as the latest Hyundai-Kia-designed eight-speed automatic transmission. So, are there differences in the way that they perform, or is the choice between them mostly dictated by aesthetics? Let’s put them under close scrutiny and get driving to find out more.

The driving experience is very similar with both these two. The Santa Fe is very slightly the lighter of the pair, with an all-up weight that shaves 54kgs off the Sorento’s turn on the scales, but there’s very little to choose between them for calibre behind the wheel. It’s odd that with identical engines, both with 197bhp power output and 325lb ft of torque, the slightly lighter Hyundai has a fractionally slower 0-62mph acceleration time, although only by a third of a second. So realistically you wouldn’t notice much difference on a spurt away from the lights, and their top speeds are identical. The Hyundai has average fuel consumption 1.5mpg less economical than its Kia rival, and a CO2 output that is 3g/km higher. A more significant difference is that with a smaller fuel tank, holding seven litres less, the Hyundai has a driving range almost 100 miles less than its more tankedup rival, so that could be an important consideration for some.

With either car, the driving experience is slickly civilised, with few sporty pretensions, but with an assured solidity. Both cars are enjoyable to drive, perform strongly, zip to 62mph in under ten seconds, and ride comfortably with a decent blend of surface cushioning and cornering prowess. There is little to choose between them on driving calibre alone, the big Kia, like its Hyundai stablemate, feels engineered for family comfort and driver satisfaction, but neither has the sporty edge that elevates cars like these from the mainstream. You can drive long distances without feeling undue strain, but the experience is not memorable. The Sorento is the heavier of the two, though only modestly, and both cars have identical towing capability at two tonnes. Either would make a decent job of hauling a large caravan or trailer.

Here’s where you can notice a bit more difference between them. Hyundai’s interior designers seem to have tried just a bit harder to elevate the Santa Fe’s cabin to a higher calibre. From both a visual and tactile viewpoint, this one steps up a level from its relative and rival. The nicely shaped and generously supportive seats are elegantly clad in high quality quilted and perforated fabric. They are very comfortable, look good and have commendable lateral support. The decor is smart with a quality feel, and the light-coloured roof lining gives the cabin an airy ambience. A nice touch is lights for the vanity mirrors that are set into the roofline above the visors. Connectivity is easily accessed just ahead of the automatic gear selector.

Kia has done a decent job of kitting out the Sorento’s interior with the facelift earlier this year, although the perceived quality is not quite as high as the plusher-looking Sante Fe’s. If you had to choose between these two on interior appearance alone, you would probably swing in favour of the Hyundai. Kia’s dashboard controls have a similar user-friendly clarity, and the controls are well placed for easy reach. There is an exuberance of piano black surfaces in the Sorento’s cabin, which both perks it up and has the disadvantage of a glossy reflection in bright light. A particularly nice touch is the little pull-out extenders on the sun visors, which are especially helpful at this time of year when low sun can be a bit of a problem at certain times of day.

These two differ in their packaging. If you regularly want to carry adults or leggy teenagers in the second seat row, then the Santa Fe has an advantage. It is better for rear passenger legroom, and more stretch-out space behind the front seats than there is in the Hyundai Santa Fe Kia Sorento Sorento. The downside though comes in the Hyundai’s smaller standard boot space when the car is configured as a five seater. Its luggage capacity is 58 litres smaller than the Kia’s, and 37 litres difficient with rows two and three folded down, which is enough to make it just a bit less practical. With all seven seats in use, the small remaining amount of boot space is similar in both cars.

There seems to be slightly more headroom in the Sorento, at least in the front two rows that will inevitably be the most commonly occupied. There is less in the rearmost pair of seats, where a steepish downward slope of the roofline somewhat compromises head space. But as there is only room for children or very dinky adults in those back row seats, which have very minimal kneeroom for anyone larger, that may not matter too much. Anyway, it’s on a par with the equally squeezed third seat row in the Santa Fe. Both cars are practical five-seaters, and can realistically be used as seven-seaters over not too extended a distance, and by rearmost passengers who don’t suffer from claustrophobia.

Because both of these cars burst through the £40k barrier, vehicle excise duty is on the expensive side at £450 per year from years two to six and £140 thereafter. In year one, the first year’s tax is integrated into the list price, but works out at a hefty £830. Opting for a model lower down the range, and under the £40k threshold will see annual vehicle excise duty drop to £140, a worthwhile difference.

With just 3g/km of CO2 between this pairing, in favour of the Kia, business users will see that both the Santa Fe and Sorento sit in the same Benefit-in- Kind banding for company car tax at 37 per cent. That’s the highest category possible under the current scheme. The Hyundai manages 44.8mpg on the combined cycle, whereas the Sorento is a touch more frugal at 46.3mpg. In reality, drivers will see little difference between the two at the fuel pumps, though the larger fuel tank of the Kia will mean that you’ll have to fill up less often.

Insurance costs are marginally more manageable on the Kia, with the Sorento falling into group 25, compared to 27 for the Santa Fe. And when it comes to servicing, each car requires maintenance every 20,000 miles. Hyundai provides a generous five-year, unlimited mileage warranty as standard, while Kia’s is in force for two years more than that, but is limited to the first 100,000 miles.

“The Santa Fe has an edge on cabin quality.””

We tested each of these cars in their most expensive guises, with the Hyundai Santa Fe Premium SE 2.2 CRDi automatic priced at £43,595, compared to £42,925 for the Kia Sorento GT-Line S 2.2 CRDi automatic. So £670 separates this pairing, that unsurprisingly includes a similar level of equipment.

The Santa Fe features a head-up display, whereas the Sorento doesn’t, and it also benefits from cornering functionality on the front fog lights and rear occupancy alert to highlight if there’s an unwanted intruder in the car. Kia has equipped the Sorento with an automated parking system and front wiper de-icer, as well as stainless steel pedals and exterior side steps.

Our researchers found both cars available at a considerable discount off the new price, with the Santa Fe available at £34,977, an £8,618 saving off the new price, and representing a discount of almost 20 per cent at online car brokers UK Car Discount (www.uk-car-discount.co.uk). And the Sorento was found with a similar discount, and £8,386 off the list price. The deal at Broker4cars (www. Broker4cars.co.uk) brought the cost down to £34,539, and preserving the Sorento’s price lead.

It’s a neck-and-neck run to the finish line for these two, and for obvious reasons. They share the same chassis, engine and transmission, so the differences between them are more in the detail than any major divergence of structure or propulsion. The Santa Fe is dearer, but that’s a narrow margin between two cars priced at upwards of £40k each. Their equipment levels are largely parallel. There is nothing to choose between them on driving calibre, and just a slight advantage to the Hyundai on cabin quality. The Santa Fe has more middle row legroom, but the Sorento has more boot space. The Kia also has a miniscule performance edge, is just a touch more economical and slightly cheaper to insure, as well as having a longer-range fuel tank. So which one wins? This one goes right to the wire, and it could easily be either, but our vote goes to the Santa Fe by a whisker.

“The Sorento is both fractionally quicker off the mark and slightly more economical.”

It’s the only model that doesn’t have seven seats, but it does have the benefit of a plug-in hybrid and petrol drivetrain, and CO2 emissions of just 46g/km. And while the government grants may have gone, there’s still other tax advantages to benefit from.

One of the newest seven-seaters in the sector, the Skoda Kodiaq has jumped to the top of the class. A wide range of diesel engines and a choice of five- or seven-seat arrangements, as well as a wide array of models means there’s a Kodiaq suitable for all.

When the new Rexton made its debut earlier this year, it was immediately obvious that it’s a much more accomplished car than its predecessor and is no longer embarrassed by any of the opposition. It’s also pricier than before, with a longer list of standard kit.

Driver, passenger, side and head airbags with passenger side de-activation

What’s Not No two-wheel-drive option. Interior doesn’t feel quite as upmarket as the Santa Fe. The third row of seats are quite tight.

Driver, passenger, side and head airbags with passenger side de-activation

What’s Not Higher list price. More expensive to insure. Boot space not as roomy. Higher CO2 emissions and marginally worse fuel economy. Acceleration to 62mph takes 0.3 of a second longer than the Sorento. The Sorento has a longer warranty. Smaller fuel tank, so you’ll need to refuel more often than the Kia. The sixth and seventh seat is short on space.