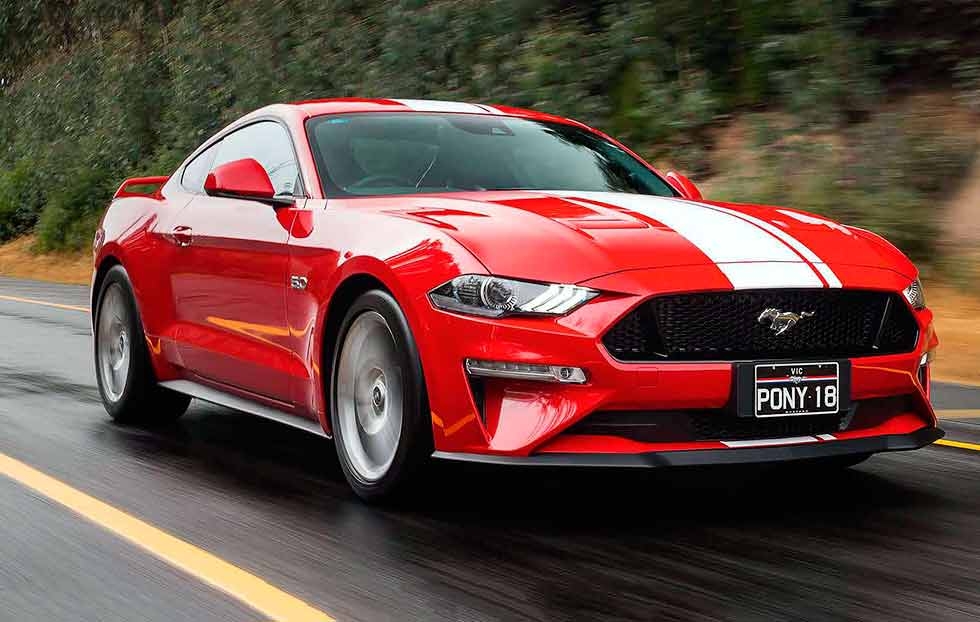 You know there’s something in the air when the Ford Mustang clocks nearly 10,000 sales in a full year, reinforcing what we’ve always known – Aussies love muscle cars. And if that’s the case with the existing car in 2017, then how is this fresher, classier, better-equipped and sharperdriving 2018 version going to fare?

Gone is the almost unbelievable entry price of the previous model. Today’s Mustang Ecoboost six-speed manual (due here in September) with a slightly torquier 224kW/441Nm 2.3-litre turbo-petrol four will set you back $49,990 before on-roads, while the meaty 339kW/556Nm V8-engined Mustang GT (on sale now) kicks off at $62,990. Both MY18 engines are available with a gee-whiz 10-speed automatic (jointly developed with GM, but with hardware and calibration unique to Ford) for $3000 extra.

For those slightly elevated stickers you get a truckload of new features, starting with the proper full-LED headlight arrangement of the US car (with tri-strip DRLs), styled to mimic the intricacy of an actual eagle’s eye, and a fully digital 12.4-inch instrument pack that turfs the daggy old analogue set-up into a dumpster somewhere in the back lots of Detroit.

Yet for all its newfangled glamour, there’s a dose of heritage in the three types of gauge styles offered in the digital screen (see p36) and you can change the ambient cabin lighting too, all via the Mustang symbol on the right-hand wheel spoke. It’s both deadsimple and totally on-trend, while leaving sat-nav mapping (if not directions) solely to SYNC3 in the centre-dash touchscreen.

Soft-feel plastics now garnish the door trims and stitched trim coats the entire centre console. In fact, everything you touch, either via fingers or elbows, has been given the ‘soft-touch’ treatment, including a cushy centre armrest, plusher door armrests with tactile stitched-leather trim, and more supple leather on Mustang’s carryover three-spoke steering wheel.

Apparently that’s what Europe and Australia demanded, so the best interior on offer in the US is what we get. The previous model shared its interior plastics supplier with the F-Series truck and, well, we know how that turned out.

Approaching the MY18 Mustang, it isn’t immediately obvious that much has changed. Yet there’s actually been quite a lot of visual surgery at the front end. Those headlights combine with horizontal fogs, a 65mm-wider grille and a 25mm-lower bonnet line to make it look sleeker (and marginally more aerodynamic), if slightly less intimidating. At the rear, new jagged-edge tailights, a new lower applique, and quad exhausts give this MY18 Pony Car a fresh look to match its superfruity new sound.

And what a sound. Ford’s obedient Yank engineers have more than made up for the lack of bent-eight burble in the old model by filtering down the Shelby GT350’s active-valve exhaust system (which opens the pipes at 1750rpm) for a comparatively earshattering experience.

On the upper two exhaust settings (Sport and Racetrack, not the demure Normal or insipid Quiet modes, also accessible via the Mustang symbol on the right-hand wheel spoke), the MY18 V8 is a barking riot. Indeed, ‘Racetrack’ can be too brutal for consistent 110km/h freeway running, though we really shouldn’t be complaining. This newfound thunder is just what petrolheads were begging for.

She’ll now rev to beyond 7000rpm (redline is seven-four; cut-out seven-five), though there’s still little point going right to the limiter. But the GT feels stronger, with a preliminary claim of 4.3sec to 100km/h for the new 10-speed auto with launch control. And what a great auto. Ticking along at just under 2000rpm at 120km/h in top, it’s arguably the only megaratio self-shifter able to deploy its entire ratio set in a country like ours. Besides the odd fluffed shift or dithered kickdown in moderate-pace driving, it’s just about flawless.

At South Australia’s new Tailem Bend racetrack, a simple nudge of the transmission lever into ‘S’ allowed the auto to choose its ratios with perfect accuracy, lap after lap. And if you start fiddling with the shift paddles when in Sport mode, it’ll even hold gears at redline without shifting up.

The six-speed manual has also been put through a workout program. A dual-mass flywheel with a twin-disc clutch makes for a lighter shift action, and every ratio is taller, with sixth being the closest to the old car’s gearing. The MY18 manual is near foolproof in its operation and now much less reliant on clutch technique for shift slickness.

It’s the MY18 Mustang’s vast dynamic improvement, however, that makes it feel half a generation newer than the previous beast when fitted with optional ‘MagneRide’ adaptive magnetic dampers ($2750). Even Normal mode feels firm, with some knobbliness and noticeable tyre noise, yet there’s been a huge improvement in body control.

And the new Michelin Pilot Sport 4 S tyres – 255/40ZR19 front and 275/40ZR19 rear – are excellent. They feel grippier than the former Pirelli P Zeros and are designed to be more effective across a broader temperature range.

Up front, beefier struts with forged-aluminium knuckles, plus bearings from the Shelby GT350, have significantly improved camber stiffness, making the Mustang feel much tauter, with far superior steering response. In conjunction with recalibrated electric steering, the vagueness and on-centre mush of the old car has given way to far more precise direction control. It’s as if Ford of Europe (or Australia) waved a magic wand over the beast and ‘hey presto’, Ford’s global dynamic DNA is suddenly front and centre. What feels firm in MagneRide’s Normal damping mode becomes very firm in Sports mode (with better front-to-rear balance and sharper turn-in) and billet firm in Racetrack.

That said, the MY18 can cop a reasonable pounding around a circuit, carry-over Brembo brakes included, so it’s entirely in keeping with what buyers want. And if it’s the auto-only convertible you’re after, then a slightly more forgiving ride is a fair trade-off for the bodystyle’s somewhat flexy, open-top experience. Additional recompense? The uprated V8’s newfound exhaust burble sounds addictively delicious.

About the only contentious change is the eradication of the previous Mustang’s bonnet bulge. That prominent visual signature was such a large part of the old car’s character that looking over the MY18’s rather flat bonnet (with twee bonnet vents) makes it feel like it has a lower cowl. Or that you’re sitting higher. Neither of those things are true.

The 2018 Mustang GT may not be quite as tough looking, yet it has been transformed in so many areas. It’s no longer an endearingly flawed beast that you need to make excuses for. Instead, it’s a focused, much more Euro-flavoured muscle car worthy of rear-drive, bent-eight adoration.

Base MY18 US Mustangs retain analogue instruments (with new graphics) but even our Ecoboost will get an all-digital instrument cluster with Normal, Sport, and Track designs. The ‘Sport’ version (left) features a tacho that curls up from the left and across the upper dial section like a ’60s strip speedo, whereas Normal displays two round gauges and Track reverts to a flat tacho band across the top and a large digital speedo on the right. ‘MyColour’ lets you experiment with different colour combos.

Even the Ecoboost (due here September) will get the active valve exhaust – introducing a ‘snarl’, according to Global Chief Program Engineer, Carl Widmann – so there won’t be a MY18 Mustang in the stable that doesn’t deliver a good dose of aural sex.

All launch GTs were fitted with lighter, stronger, yet rather plain-looking five-spoke forged 19-inch alloys that are a $2500 option. Standard fare for V8 models are the carry-over black mesh 19s with mixed width (255/40 front and 275/40 rear) tyres.

For the first time, Recaro leather front seats will be optional in Fastback versions for an extra $3000. They’re even more huggy than the stock seats but you only get electric cushion adjustment, while losing seat heating and cooling.

Given a fully optioned Mustang GT Fastback is close to $75K, HSV’s right-hook-converted Camaro doesn’t appear so exxy, though it’s not the 2019 updated version.

A rear-drive, two-door that’s almost as quick as a 10-speed Mustang GT auto, yet the lighter BMW has the edge in terms of ultimate agility, and fuel economy.