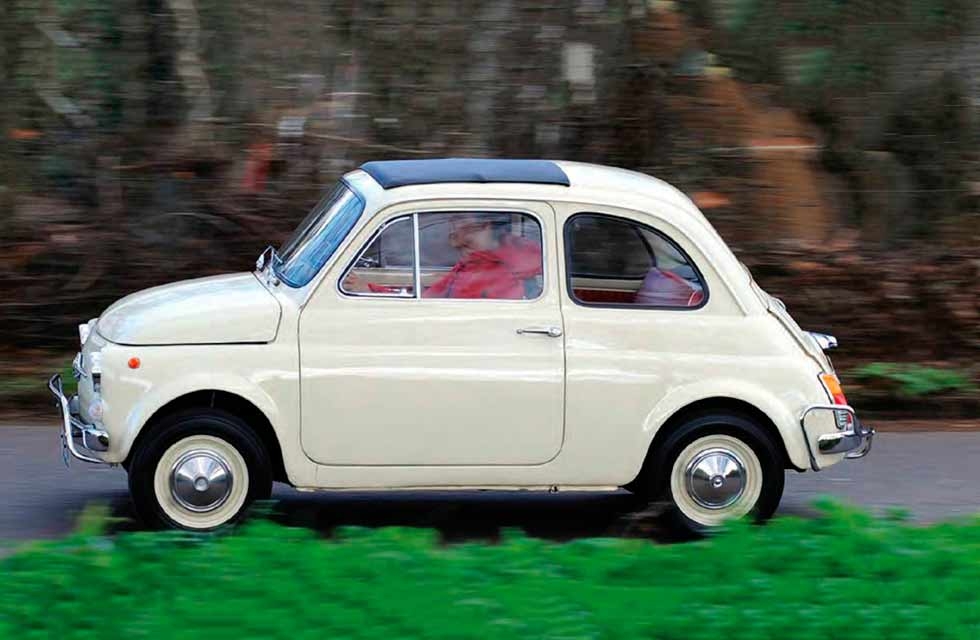 CinquElectro. Having driven this pure electric Fiat 500, we’re convinced this is the way all Fiat 500s should be. Story by Chris Rees. Photography by Michael Ward.

A classic converted to battery power

Chugga-chugga-chug-chug. The sound of a Fiat 500 starter motor turning over is one you never forget. Except this time, you can totally forget it. Turning the key in the slot of this 500 produces no sound whatsoever.

You see, I’m in a Fiat 500 converted to pure electric power, and the only noise it makes is the faintest hum. Welcome to the past, reimagined for the future. It’s a new venture developed jointly by Classic Chrome in London and Electric Classic Cars, which is based in mid-Wales and which has already converted many classics to battery power. The baby Fiat seems to me the perfect car to electrify: an urban classic, it drives far better than the original and now has zero tailpipe emissions.

Here’s another difference in the way it drives: delicately feathering the clutch pedal on take-offs is now history. Instead, you don’t even need to use your left foot when setting off. Just engage a gear – second will do – then press the accelerator and you’re away. It’s so easy that Alexander the meerkat should be alongside me screaking “Simples!”.

It’s not just easy to drive, but fast too. Some glaciers move more quickly than a wellworn 499cc Fiat, but the electrified version fairly zooms along. You get 100% torque, instantly, from rest. The power and torque figures for the standard version (three-batteries and 16kWh) are 47hp and 95Nm (70lb ft). While this may not sound like much, it’s roughly three times more than an original Fiat 500F. In a machine weighing less than 500kg, it’s plenty enough, believe me.

The motor is a three-phase AC unit from HPEVS (High Performance Electric Vehicle Systems). As for the batteries, these come from Tesla, no less. There are three in the standard 16kWh version. You can have more performance by opting for a more powerful 65hp motor and four batteries (total 22kWh). In my humble opinion, that may well be too much for the baby Fiat.

The 47hp model’s top speed is over 70mph; with the higher power motor fitted, it’s an ‘unmentionable’ figure. Depending on how you drive, the range is 50-75 miles between charges (or 100 miles with four batteries fitted). You can charge the car at home overnight with a 13-amp plug, or use a commercial charging point. Simply lift up the front badge and there’s the connector – beautiful! It takes about six hours to charge via a 2.5kW charger.

The original Fiat gearbox is retained, which means that, unlike almost every other EV (which typically have a single-speed gearbox), the 500 EV has four speeds. In our London road test, we found that you don’t really need to change gear much; you can waft about in second or third gear and simply let the torque do the work. To cope with the extra power, modifications are needed to the suspension and driveshafts, while uprated front disc brakes are also fitted.

Our test car is a 1970 example, but Classic Chrome has previously converted an early suicide-door 500, too. Step inside and the cabin looks almost entirely standard. The original choke and starting levers that normally nestle between the seats are replaced by new controls for the electric heater. On the dashboard sits an E-Xpert battery monitor to let you know how much juice you’ve got left. One other change: under the bonnet, the petrol tank has been removed, leaving useful storage space (the battery pack located here is tiny).

I love this electric Fiat. It feels just right, like it was always meant to be this way. Everyone in big cities should be driving cars like this. But here’s what may be the stumbling block for many people: the price. It costs around £25,000 to convert a Fiat 500 to electric power in base spec; £29,000 for the high-power model. The company will soon be offering DIY kits that will reduce that cost by quite a bit, though. Optional extras include an upgrade to Fiat 126 rack-and-pinion steering, LHD to RHD conversions, and various in-car entertainment and car security systems.

In cities that are increasingly imposing new restrictions on conventionally powered cars, electric classics are a brilliant solution, drawing inspiration from both the future and the past. This Fiat 500 could also be just about the cheapest car in the world to run, too: free road tax, free London congestion charge, about two quid to recharge and virtually no mechanical parts in the drivetrain to maintain. Sensible, planet-saving and heaps of fun – we want one, a lot.