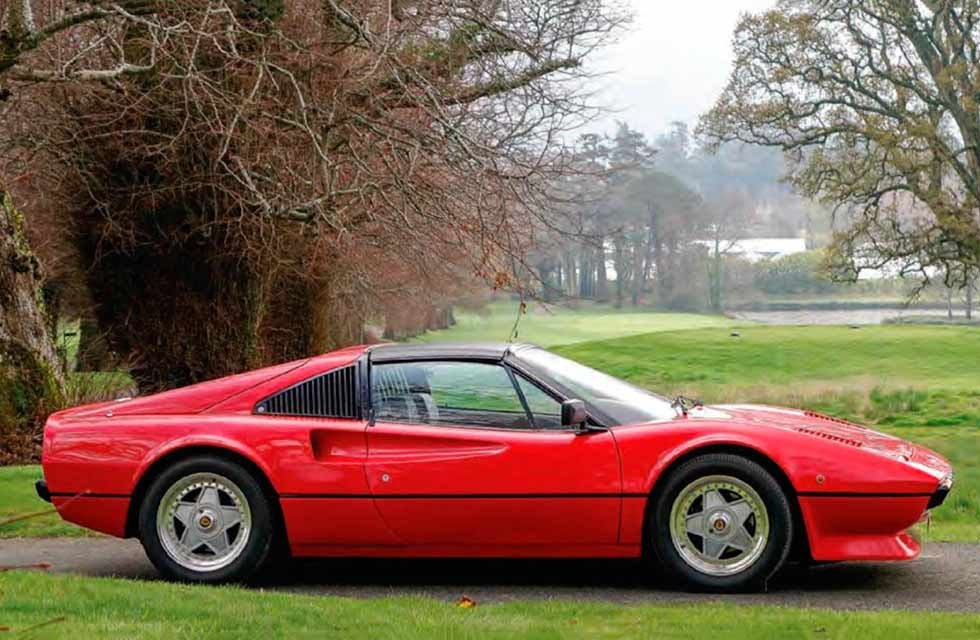 It’s not just Fiats being converted to battery power – this Ferrari 308 has 450hp of Tesla electrickery. Story & images by Shane O’ Donoghue.

The ‘E’ stands for Electric, courtesy of Tesla

Let’s leave the philosophical discussion about replacing the sonorous naturally aspirated V8 of a 1980s Ferrari with an electric motor to one side and instead focus on what electric power can do for a classic. The car you see before you started life as a 308 GTSi with a steel body and power by a fuel-injected 2.9-litre V8 with 214hp, weighing approximately 1200kg.

Its owner fancied a bit of a change, so got in touch with Electric Classic Cars in Wales to discuss a full conversion to electric power. The company has already produced dozens of electric classics, but this was its first Ferrari 308, and it took nigh-on nine months to produce. The owner wanted to preserve the character of the car while enhancing its performance, reliability and the ability to use it in the future no matter what legislation comes into place governing internal combustion engines.

Approach the converted Ferrari for the first time and you’ll possibly be too distracted by the seductive curves, penned by Pininfarina’s Leonardo Fioravanti, to notice that there are no exhaust pipes sticking out the back. The only other external clue that this is not a standard 308 is the cheeky replacement of the ‘GTSi’ badge at the back with ‘GTE’.

Sit inside and there are some clues, despite the interior being almost untouched. It smells and looks well-used and the odometer shows over 46,000 miles. In front of you is the expected spindly three-spoke steering wheel and Veglia Borletti instruments, along with the original flimsy air vents and column stalks. But while the centre console holds the traditional opengate manual gear shifter, to its left is the first indication as to what this car is all about. There’s a neatly integrated touchscreen that allows the owner to check on the electric powertrain.

In the back, in place of the V8, is an electric motor from Tesla. In this installation, it produces a maximum output of about 450hp, though with an upgraded inverter and other tweaks, it can be good for over 600hp. It drives the rear wheels through a single-speed reduction gearbox and, unlike Tesla’s cars, there’s a mechanical limited slip differential. That, explains Richard Morgan (Founder and CEO of Electric Classic Cars), helps get all the power down in a more useful fashion.

In our road test, it’s sharp off the line and easy to modulate the accelerator. The addition of electronic traction control and bigger tyres enables a 0-60mph time of 3.5 seconds (the original did it in 7.3 seconds). Oh, and this car will apparently do 165mph. Not that we’re going to have the opportunity to verify that claim today, but slot that tall lever into place (you’ve only got one forward and one reverse gear, despite the multi-position shifting gate) and the 308 certainly feels perky, especially as the considerable forward thrust is accompanied by nothing more than a whirr from the motor (and a few creaks and groans from the interior). The steering feels wonderfully alive (the owner declined to add power assistance) and while the brake pedal isn’t the most confidence-inspiring in feel, the stopping power is fine. Thanks to the regenerative braking effect of the motor, little other than better pads were deemed necessary.

Aftermarket adjustable coilover suspension has been fitted, and a considerable amount of work on the spring rates front and rear and the alignment of all four wheels has been carried out. That’s necessary because of a 30kg weight reduction overall and, more importantly, a significant altering of the weight balance. The original car had a 40/60 front/rear balance, but the electric one is 50/50, to the benefit of how the car changes direction and responds to inputs mid-corner. This may look like an old car and at first feel like one, but dig deeper and it drives like something far more modern. Maybe this electric car thing will catch on after all…