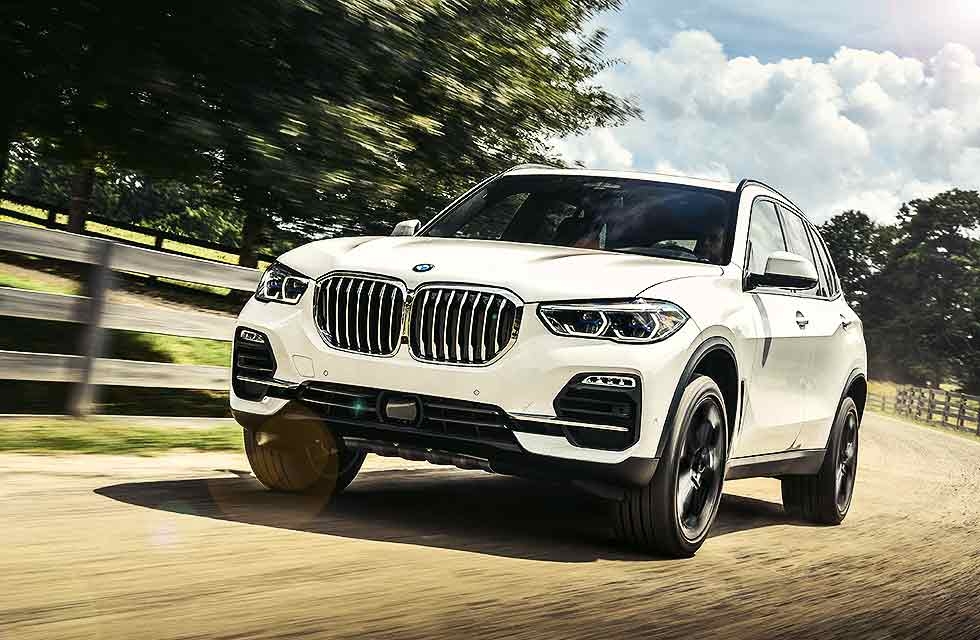 2019 BMW X5 Definitely bigger. Is it better? Reach for the pies The fourth-generation 2019 BMW X5 G05 is more innovative than it looks – but it’s also bigger and heavier. Words by Adam Towler.

Hip-hop legend DMX may not have written the lyrics ‘X gon’ give it to ya, X gon’ deliver to ya’ specifically about BMW’s burgeoning range of SUVs, but it does seem to have acted as a spur to BMW to keep adding more models to its X line-up, and to keep making those vehicles bigger and more complex, all in the cause of feeding the kayak and mountain bike fantasies of the world’s wealthier citizens.

When the first X5 arrived nearly 20 years ago it was an outlier, a Range Rover rival from a company more used to battling the E-Class. Now it sits temporarily at the top of a range that doesn’t miss a digit from 1 to 6, with the even larger X7 just months away. The fourth-generation X5 is all about more. More eye-catching tech, more power, more luxury and more space: although still not as big as its key rival, the Audi Q7, the new X5 is longer, wider and taller than its predecessor, as well as now coming with air suspension, all-wheel steering and a techier cabin

Trim choice is simple – if you can afford to step up from xLine then pick M Sport (as 80 per cent of drivers will do) and you get 20-inch alloys and an M Sport bodykit and badges. But xLine is well equipped as standard: eight-speed automatic gearbox, all-wheel drive, air suspension and BMW’s latest cockpit. This involves two 12.3-inch screens and is highly effective, if not quite as spaceage as the two-screen system you’ll find in a Mercedes-Benz.

The old climate control panel of many buttons has been stripped right back, offering a much more modern and decluttered centre console, plus knurled switches (like a Bentley!) and a crystalline gearshift (like a Volvo!).

Audi’s cohesive and simple Q7 interior is still the benchmark here, but it’s fair to assume the newer two-screen set-up from the Q8 will find its way into the Q7 soon, at which point the comparatively cleaner X5 will look all the more attractive.

There’s plenty of space in the second row for adults thanks to a low transmission tunnel, and the 650-litre boot is usefully square, with minimal intrusion. It expands to 1860 litres with the second row down; a third row is optional. You get a split tailgate as standard, which is handy for perching on while you lace up your walking boots, or as a picnic table. The possibilities are endless.

Cool tech includes a host of semiautonomous and connectivity gadgets – you can now programme the sat-nav from your smartphone and have it send you messages warning about traffic and other delays en route to your next appointment, even when you’re not actually in the car.

You can also use your phone as the car key, which BMW says is harder to hack than the standard key. Plus you can send access codes to up to four friends, and because their BMW profile can be stored in the cloud, your X5 will automatically set itself up for them when they drive it, terrible radio station choices and all.

But it’s the way it drives that separates the X5 from the bulk of its rivals. It’s unlikely you’d select any SUV as your first choice for tackling a challenging stretch of blacktop, but the heartening thing about the X5 is that it does all the muddy stuff you could ever need while still being highly entertaining on the road, even with the most modest of the three engines.

The 30d is ruthlessly effective: smooth and quiet until you stretch it, with a decent enough whoosh of torque so you shouldn’t need to experience its more vocal upper reaches. The petrol 40i is faster and much more hushed, yet spicier sounding when you wring it out. The trade-off for this in a two-tonne car is, of course, fuel economy, but given the 40i is barely a handful of tenths slower than the M50d and substantially cheaper to buy, it could make sense.

Standard air suspension works well to isolate potholes and on our route didn’t demonstrate any of the pitterpatter wobbliness often associated with such a set-up. We found it to be very comfortable indeed, but the roads we drove on were pretty smooth so it’ll be interesting to test it fully in the UK.

Active anti-roll bars help to keep the body movement neat and tidy and there’s very little sloshing weight transfer to worry about in a series of corners, allowing you to really lean on the all-wheel-drive system. This subtly shuffles power around in combination with rear-wheel steering to give the X5 a confidence-inspiring nature – it always feels like there’s a bit more grip and a bit more lock to use if you bowl into a corner with abandon.

It’s a relaxed, sophisticated car that can provide uncanny thrills as long as you don’t ask too much of it. And, unlike more focused performance cars, you can also pack it full of people and scuba tanks and neoprene and go and have a fabulous day out somewhere adventurous. Or at least give your neighbours the impression that you do.

Mercedes GLE Merc is dated and on the pricey side

New X5 is the biggest yet – and the even bigger X7 is on its way Mk4 gets new grille and kink. Bigger changes are inside.