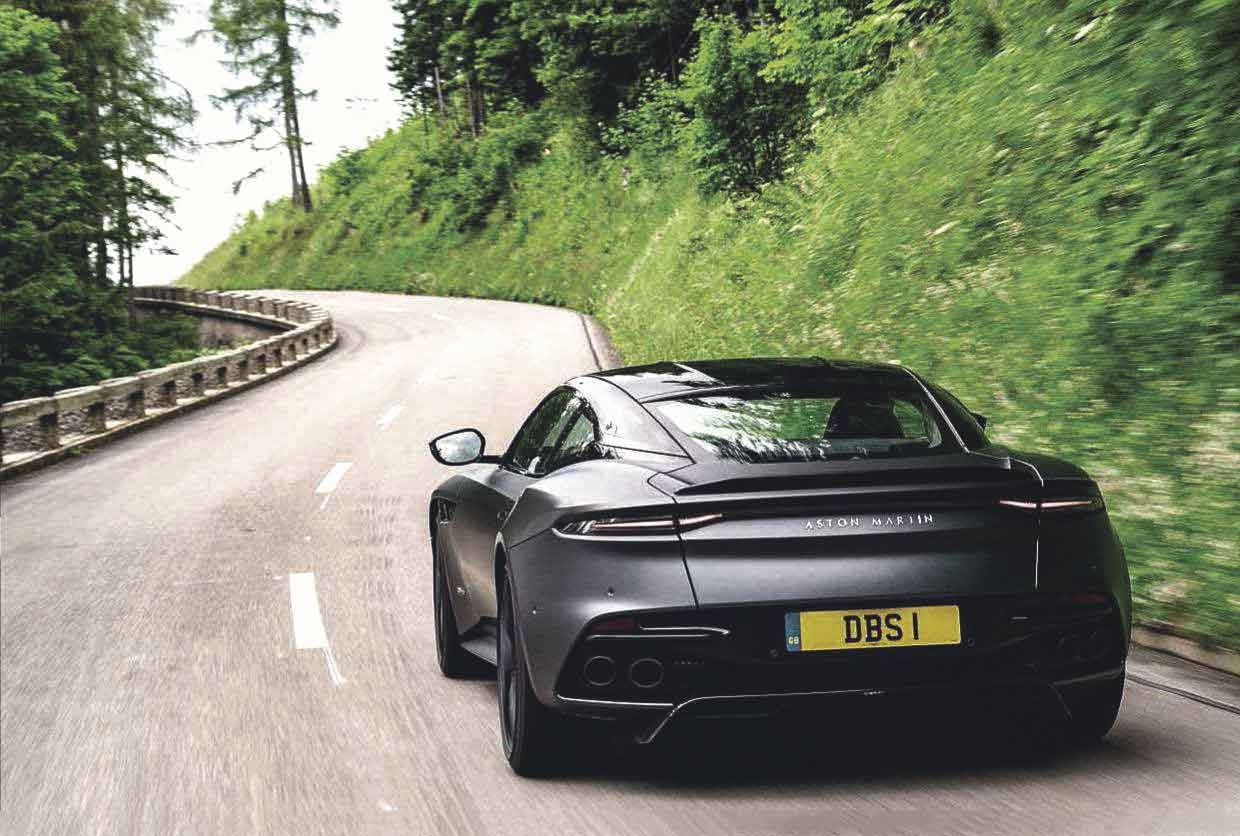 2019 Aston Martin DBS Superleggera. The £225,000 carbonfibre-bodied ‘Superlight’ replaces the Vanquish S. Is this the best new-era Aston yet?

Here’s another new car to emerge from Gaydon, and how’s this to grab your attention: it has 664lb ft of torque from just 1800rpm. I thought that’d do it.

The DBS is a DB11 V12 on full afterburner reheat, both visually and in performance, but given our rather indifferent opinion of the DB11 V12 – itself now replaced by the moderately improved DB11 AMR – it seems quite a stretch for an evolution of that car to challenge Ferrari’s extraordinarily angry 812 Superfast for front-engined supercar supremacy.

Nevertheless, one of this car’s key strengths was actually relatively easy to achieve: extracting 715bhp from Aston’s twin-turbocharged V12 may seem like a landmark achievement, but getting the extra 85bhp and 148lb ft over what the AMR offers simply required an ECU remap, taking the 5.2-litre lump to the extreme of what it can manage before hardware changes are required. It’s hooked up to a new gearbox – still an eight- speed ZF auto, but a larger, stronger unit to handle the massive torque now pulsating through it. There’s a mechanical limited-slip differential after that, with torque vectoring, and a shorter final drive for the benefit of acceleration. Dealing with those massive outputs at the ground are 21-inch wheels shod with bespoke Pirelli P Zero tyres, 265/35 at the front, 305/30 at the rear.

Aston has dusted off the old Superleggera badge because the DBS features carbonfibre body panels over the company’s latest aluminium chassis architecture, echoing in spirit the alloy panels and tubular-frame chassis of models such as the DB5. The carbon body contributes to a 25kg weight saving over the DB11 AMR, although the ‘Superlight’ description is a bit of a misnomer because at 1770kg this is emphatically not a light car.

With its gaping jaw ready to hoover up anything and everything in its path, and numerous aerodynamic enhancements, the DBS exudes a simmering menace and also produces a handy 180kg of downforce at its 211mph top speed. Most of all, it’s the sheer size of the car that makes a lasting impression: whichever angle you view it from it’s a Goliath, in particular the length of the bonnet, which Dick Dastardly would surely have approved of.

The downside to these proportions is a practical one: sitting low in the driver’s seat I can barely see the top of the bonnet, let alone where it might end. Yes, the hyper-GT proportions are part of the car’s charm, but it’s worth noting that the combination of poor visibility and the car’s substantial girth will make committing with conviction to country roads in the UK a challenge. Copious use of Alcantara and luxuriously soft leather lifts the rather dour cabin, but I miss the sheer theatre of the Bez-era Astons, even if everything actually works much better these days.

So, a 0-62mph time of 3.4 sec suggests the DBS is fast, but it has such a raging, relentless, yet eerily smooth tide of mid-range torque that it actually feels even quicker. Then again, its claimed 0-100mph time of 6.4sec is only one-tenth off a McLaren F1’s; essentially, it’s a real dragster in a straight line.

What’s quickly apparent is that the DBS is a very different car to the Superfast. This is a good thing, and a wise move. Where the Ferrari suggests it might be a trans-continental GT with a hypercar engine, but in reality is as hyperactive and demandingly edgy as any wild-looking mid-engined device, the Aston lays its talents out on more familiar ground: it’s still a big grand tourer, with a slush ’box and a ride quality that, on largely smooth Austrian roads at least, feels very composed. I get the feeling you could drive it all day, and long into the night, and not feel overly tired.

However, you can undoubtedly hustle it along, too. There are the usual three modes for the engine and gearbox, and a further three for the Skyhook adaptive suspension. With both set to their most relaxed settings the is suitably demure, and it’s only when the road turns more testing that you suddenly crave more body control, sensing the car’s substantial mass shifting laterally. Switching out of GT mode into Sport provides a keener throttle response, and a lot more noise, including the now seemingly de rigueur exhaust pops and bangs, which feel a bit forced to my ears.

Those modern Aston Martin genes are very much present, which is hardly surprising when the core components and layout are largely the same as on the DB11s and the Vantage, but here the tuning and individual parts – the bushes and the damper internals, for example – are pitched somewhere between the two in terms of spirit. I’m still unsure about the rate of the steering, which turns the nose very quickly once away from the straight ahead and requires restraint if you’re not to ‘over steer’ the car in a curve, but on the plus side it’s nicely weighted and not without feedback. Where the DBS struggles on occasion is when the rear suspension is heavily loaded, as we found with the new Vantage. There’s less vertical movement at the back here, but there’s still the distinct feeling of the rear subtly shuffling around in random directions, nibbling away at your confidence. Sure, there’s so much torque it was always going to be a trial for the rear axle, and the relative softness at the rear does assist outright traction, but it can be a little unnerving all the same.

As for the carbon-ceramic brakes, they provide faultless stopping power with good feel underfoot, while the gearbox essentially does its best to keep up. Like all torque converters used in high-power applications, it’s unbeatable at smoothing the changes out in normal driving, but less confident when tasked with a full-bore upshift near the red line.

Overall, the DBS feels the most coherent of the three new-era Astons. You’d hope so, given it costs from £225,000, but by combining readily exploitable talents, the firm may just have hit upon a particularly sweet recipe.

Above right: cabin is largely shared with DBS the DB11 and lacks a little of the old Aston-Martin flair.

Above: DBS feels big on a B-road. Right: Superleggera badge reflects extensive use of carbonfibre.