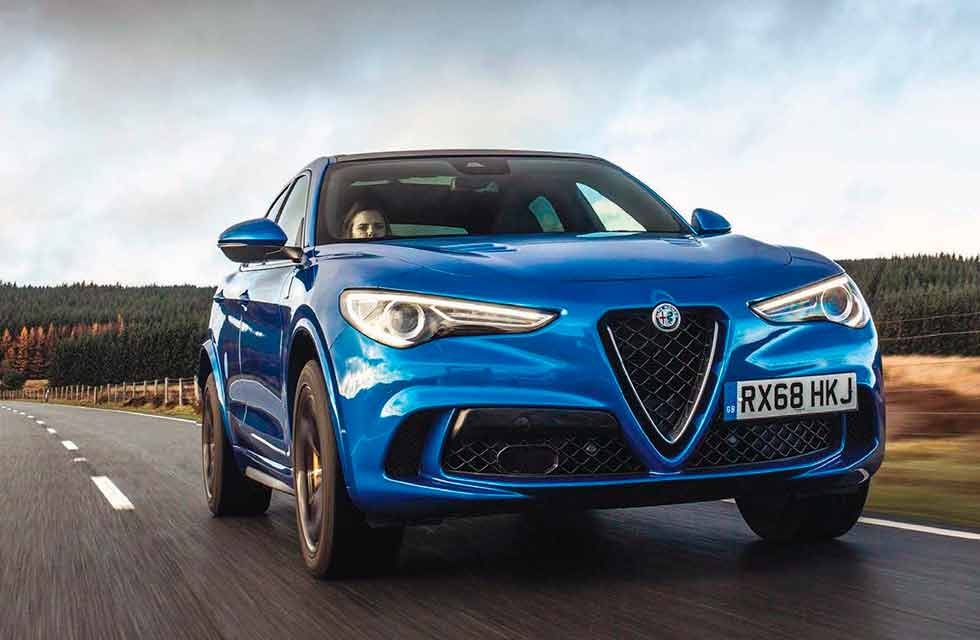 The Q Factor.The 510hp Stelvio Quadrifoglio has finally arrived in the UK. On some epic Scottish roads, we discover why the Stelvio might actually be better – and quicker – than the Giulia QV. Story by Chris Rees. Images by Simon Thompson.

Quadrifoglio: a four-syllable, four-leaf badge of honour that’s guaranteed to get your Alfa heart pulsing. It already has, in the form of the Giulia Quadrifoglio. And now it’s arrived on the Stelvio, and it’s arrived on UK roads. To say I’m aquiver with anticipation is an understatement.

After all, here is 510hp worth of Italian-built brawn with every calorie of full-fat allure turned up to 11: ‘Race’ mode, thwappy exhaust, carbon goodies – you know, the works. Yes, we’re talking about an SUV, and as we all know, SUVs are oversized, overweight and overabundant. But I prefer think of the Stelvio QV like this: since the Giulia’s four-door saloon format simply doesn’t suit some people, and since Alfa hasn’t built a Giulia Wagon, families on the lookout for a pulversingly high-performance machine now have an Alfabadged option.

“While the Giulia QV can be exceedingly snap-happy in corners, the Stelvio QV very definitely isn’t”

So let’s begin the test. I’m in Scotland, in the remote, little-visited, elevated terrain to the east of Loch Lomond, where mile after mile of fabulous driving roads snake their way across moors and mountains. In other words, perfect terrain for one of the fastest 4x4s on the planet.

Fastest? Certainly in terms of straight-line speed. With exactly the same Ferrari-engineered 510hp powerplant as the Giulia QV, but 4×4 to help it off the line, it’s actually quicker to 62mph than the Giulia – 3.8 seconds versus 3.9. That’s despite having a substantial weight disadvantage (some 225kg heavier than the Giulia). By the way, like the Giulia QV, it has a carbonfibre driveshaft, just one of a range of measures to keep weight down to 1830kg, giving it the best power-to-weight ratio in its class. It also has a best-in-class aerodynamic drag figure of less than Cd 0.30, so it punches through the air cleanly at speed, too. For the record, it can reach 176mph.

Blisteringly quick it certainly is, but it’s absolutely not intimidating to drive. A mighty slug of maximum torque (600Nm) is available from just 2500rpm, so it’s utterly effortless to cruise around in. The familiar ZF eight-speed automatic gearbox is uniquely configured for this car. In manual mode, using the beautifully crafted (and huge) aluminium paddle shifters, you benefit from both control and fun at your fingertips. In full auto mode, it’s smooth, intuitive and fast-acting, taking just 150 milliseconds to change cogs when you switch the DNA drive mode selector to ‘Race’.

In mild-mannered ‘A’ mode, it can run on three cylinders to save fuel. I was a bit shocked to hear from Alfa Romeo’s chief engineer that many people use their QV solely in ‘A’ mode. OK, it’s more relaxed driving it like that, but seriously, what are you doing buying a QV if you want to be relaxed? You want to feel alive. Stick it in Race mode, you wombles!

Speaking of Race mode, the QV sounds amazing when the dial is in ‘R’. Above 3000rpm, the exhaust valves open fully and there’s a full-on symphony of sound. It’s brazenly loud but not remotely artificial, with the exhaust crackling deliciously each time the gear changes up. Yes!

So here’s the big rub: how does the 4×4 system change the cornering experience? The first thing to say is that the centre of gravity is only 75mm higher than the Giulia’s. Roll angles are higher, yes, but not by much. That partially explains why the Stelvio just doesn’t suffer the same handling woes as most SUVs.

The standard active suspension adjusts the damping to suit, and also according to which driving mode you’re in. And very quickly, I find myself confidently switching straight to Race mode on roads where I’d be extremely hesitant to do so in a Giulia. Why? Because the Stelvio’s four-wheel drive system inspires total confidence, even when the wheels start to slide. In normal driving, 100 per cent of torque is directed to the rear wheels, but up to 50 per cent can be sent to the front end. So while the Giulia QV can be exceedingly snap-happy in corners, the Stelvio QV very definitely isn’t.

Don’t worry, you can still get the rear end to move about, it’s just that you’re drifting with a far smaller steering angle than in the Giulia. Not nearly as lairy, then. Speaking of steering, the 12.1:1 steering ratio is the fastest in the SUV class – almost to the point of feeling nervous at times, but you very soon adjust. Torque vectoring via the rear diff also gives the impression of four-wheel steering. Overall, it may not be as much fun as swinging the tail out in a Giulia QV, but ultimately the Stelvio is the quicker car in real world driving, because of the confidence you can place in its 4×4 cornering abilities.

Incidentally, you can change the damper settings manually, whatever driving mode you’re in. I found that, on these bumpy Scottish roads, it was best to use Race mode with the dampers in their softer ‘mid’ position – the perfect combination of handling sharpness and compliance. And the ride quality is excellent, whichever mode you’re in.

A word on brakes. They’re awesome. Even the standard discs bring the car to a halt in unbelievably short shrift. I’m surprised to discover that the pedal has no physical connection to the brakes, other than a piece of rubber which sends electrical messages that are then translated to brake force. You can opt for carbon ceramic brakes, which saves 17kg in weight but costs you in the wallet department (£5900). I must say, though, that I’d be tempted by the yellow callipers that my test car had – a bargain at £595.

On the subject of colour, eight paint options are available. The body-coloured wheelarches of the QV mean that darker shades tend to suit the car better. That said, it does look fantastic in Misano Blue or Competizione Red. If you want to spot a QV compared to a standard Stelvio, look for its vented bonnet, side intercooler vents, side skirts, quad exhaust tailpipes and green cloverleaf badges. Inside, you have genuine carbonfibre accents, unique seat stitching and a fabulous carbon-and-Alcantara steering wheel with a red starter button. If you want the delicious Sparco carbon front seat option, by the way, that’s £3250.

I do have a few small beefs. Alfa has made a deliberate decision to group together settings into different modes but I think the enthusiast should be able to exert more control to individual taste. For instance, you don’t get the best exhaust note unless the car is in Race mode. Most Alfa fans I know would like that sound but in other modes. The good news is that, according to a senior Alfa engineer I spoke with, there will be change coming on this front (although we don’t know when). Another minor gripe is the plasticky gear lever. More significant is the info screen system, which is slow, awkward to use and has a narrow letterbox format that makes it feel small.

One last question of a philosophical nature. Should it be called QF, QV or Q? Strictly speaking, it’s Q. After all, since there’s no ‘V’ in Quadrifoglio, how could it be ‘QV’? But everyone I’ve spoken to at Alfa Romeo calls it the QV, and the Italian launch numberplate is ‘AR510QV’. Who are we to argue? It’s certainly got the ‘Q’ factor!

The Stelvio Quadrifoglio is on sale now in the UK priced from £69,500, which makes it very good value for the performance and spec. If you’re into leasing or hire purchase, there are some very competitive deals out there because the QV is forecast to keep its value so well.

The Stelvio Quadrifoglio makes an exceedingly good case for itself. It’s a practical five-seat SUV with loads of space inside, and yet a supercar slayer and divine through corners when you press on, and all done in remarkable comfort and total safety.

You can go into Race mode without scaring the be-cheesers out of yourself. You can load up not just five people but a whole pile of luggage, too. With its 4×4 system, you can tackle winters with ease. And it even gets to 62mph faster than the Giulia QV.

Is it as exciting as the Giulia QV? No, it isn’t. Is it more exciting than any other SUV rival? Absolutely yes, it is. It also gets a special award from me: it’s the Best New Italian Car launched in 2018.

QV not special enough for you? Alfa has the answer: the NRING limited edition. Inspired by the Stelvio’s Nürburgring lap record (7min 51.7sec, since you ask), it’s mostly a dress-up edition, but hardcore fans will appreciate the standard carbon brakes and red-stitched Sparco carbon seats. Other features include exclusive Circuito Grey matt paint, ‘NRING’ badging, numbered carbonfibre dashboard plaque, MOPAR carbon gearknob, leather-and-Alcantara/carbon steering wheel, plus carbon mirror caps and side skirt inserts. Owners will also get a driving course at the Nürburgring.

Just 108 examples are available for Europe and the Middle East, priced at £89,500 apiece. Each will have ‘Authenticity Certification’ from FCA Heritage, giving it “instant classic status”, says Alfa Romeo – which also, incidentally, claims the NRING “will go up in value”.