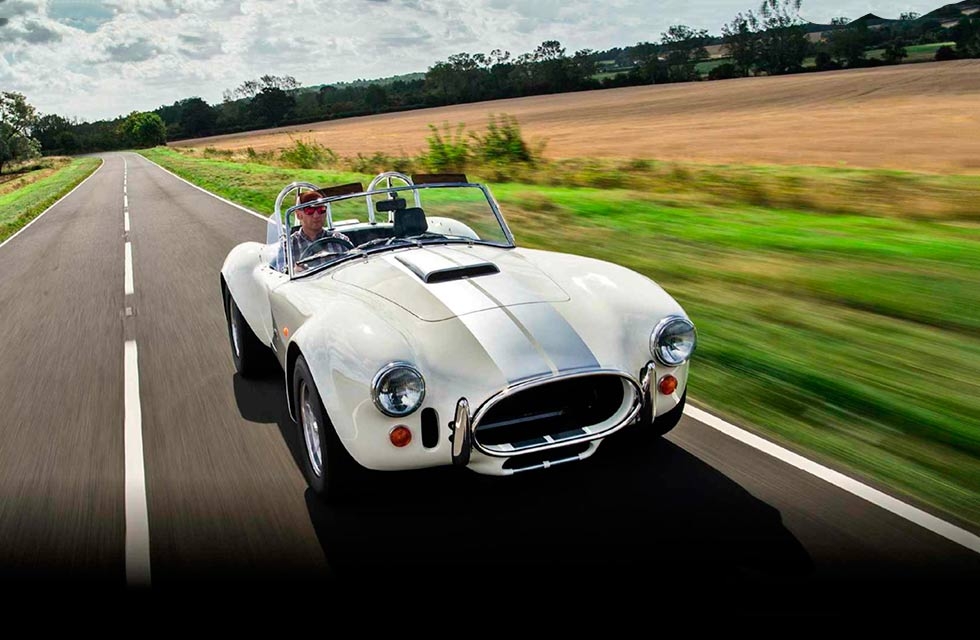 Cobra aficionados will no doubt be apoplectic about AC’s latest take on its own legendary sports car from the 1960s. Why? Because it is powered not by a Ford V8 but, shock-horror, by a 6.2-litre (or 378-cubic-inch) GM V8 that’s been lifted straight out of the engine bay of a Camaro. Once they’ve picked themselves up off the floor, however, even the Cobra diehards might eventually admit that AC’s all-new but still 100 per cent authentic-looking Cobra is, in fact, still a deeply appealing car. Especially if they open the bonnet and see just how nice a fit the GM-sourced engine is, and realise how neat and tidy and, well, modern everything looks. Although admittedly the big plastic engine cover does seem a touch corporate compared with a double-quartet of silver induction trumpets and some MSD ignition cables, and maybe some actual oil to wipe away in places.

If they were to then pull on one of the door handles – which come in the form of a cord on the inside of the door – they’d soon realise that there have been more improvements made inside the cabin, too. For starters, the build quality appears to be exceptionally high, even though the look and feel of the cabin is absolutely straight out of the ’60s. This includes a pair of leather chairs that look great but which provide almost no side support whatsoever. Instead you lean against the door or cling on like mad to the AC-embossed Moto-Lita steering wheel when cornering, just like they did in the good old days.

Secondly, there’s a fair bit more space on offer inside, with more room for flailing elbows to the sides, a slightly less cramped footwell in which your feet can now dance to their heart’s content on better-positioned pedals, plus a lot more rearward travel on the driver’s seat. Hood down, therefore, the all-new-but-still-old- looking AC Cobra can be driven by almost anyone, of any shape, size or height.

Ultimately, such increased driveability is fundamentally what this new Cobra is all about. ‘We didn’t really want to build the same old car, with the same old issues,’ says AC boss Alan Lubinsky, even though he admits that his team has done its utmost to ensure the car is all but identical visually to a MkIII Cobra from the ’60s, or the 427 as it was also known – that’s the one with the big rear wheelarches, rather than the 289, which was less musclebound generally.

As such, the clutch is way lighter than of old, the six-speed gearbox deliberately slick and easy in its operation (but still using that same distinctive long gearlever, which points straight at the windscreen), while the throttle is also light and simple to use, easy to modulate. They wanted to make a Cobra that just about anyone could fit into and then drive, explains Lubinsky. ‘And pretty much 365 days a year if the weather is right.’

And the price? Well there are two different versions available, both made in Port Elizabeth, South Africa, both featuring the exact same pre-preg composite MkIII bodyshell, which appears extremely well assembled and has laser-like panel gaps and a level of paint finish to make your heart flutter, assuming this test car is typical. Version one – which is what we’re driving here – has 440bhp and 445lb ft and costs £90,000. Version two has 550bhp and 550lb ft thanks to the addition of a supercharger, and costs £102,500.

So I guess the sixty-four thousand dollar question is: have they ruined the AC Cobra by making it more approachable and just easier to live with generally, or have they made it better than ever to drive?

I come away after a day at the wheel thinking many thoughts, just about all of which are positive. And I certainly don’t think they’ve ruined it, even if the sight that greets you when you lift that exquisitely finished bonnet is, to be honest, just a little bit unappetising, albeit only from a traditional viewpoint.

On the move, the new Cobra feels usable and, yes, much easier to drive than any other Cobra I’ve driven – original, kit or otherwise. But it still feels authentic, despite the light clutch, the slick gearchange, the extraordinarily smooth throttle and the extra sense of space when behind the wheel.

You still naturally rest your right elbow out on top of the driver’s door, just like you always have in a Cobra, but this time there’s less sense of being cramped, and the pedals are indeed all much better positioned, even if they are still offset towards the centre.

What’s not in any doubt, however, is the way the new AC Cobra sounds. Or goes. With 440bhp and a claimed kerb weight of just under 1100kg, the numbers still look pretty tasty on paper. AC claims 0-60mph in ‘around four seconds’ but I reckon it feels even quicker than that. The traction the car generates is phenomenal given how short the gearing is and how much torque there is. I guess this is down to a combination of those typically fat Mickey Thompson rear tyres, allied to a fairly soft set-up for the ladder-frame chassis and its multi-link rear suspension.

Either way, it goes like stink when you crack the throttle open in any of the first four gears, failing to break traction even on full beans in second gear – in the dry at least. And while the noise it makes might not quite burst your eardrums or make your heart explode, it still sounds right. It still sounds like an AC Cobra should, with a decent V8 rumble that rises to a proper roar over the last 2000rpm.

Plus, surprise, surprise, it rides not too badly, has power steering that is better than so-so (but still not what you’d call seminal; never was, never should be in a Cobra), while the handling and body control are both similarly well sorted, given the fundamental age of design of the underpinnings.

In short, the new AC Cobra is more than good enough dynamically, is unquestionably more usable and practical than ever before and it still looks a million dollars on the road. I’m not sure why, but it even feels like something of a bargain at ninety grand as well. Then again, logic has never been part of the argument when it comes to the AC Cobra. Long may that remain the case.

‘It still sounds like an AC Cobra should, with a decent V8 rumble that rises to a proper roar over the last 2000rpm’

Left: exterior styling has changed little, but the ergonomics inside the cabin (above) have been sympathetically improved. Top right: engine looks incongruous, but there are no quibbles with its performance or soundtrack.