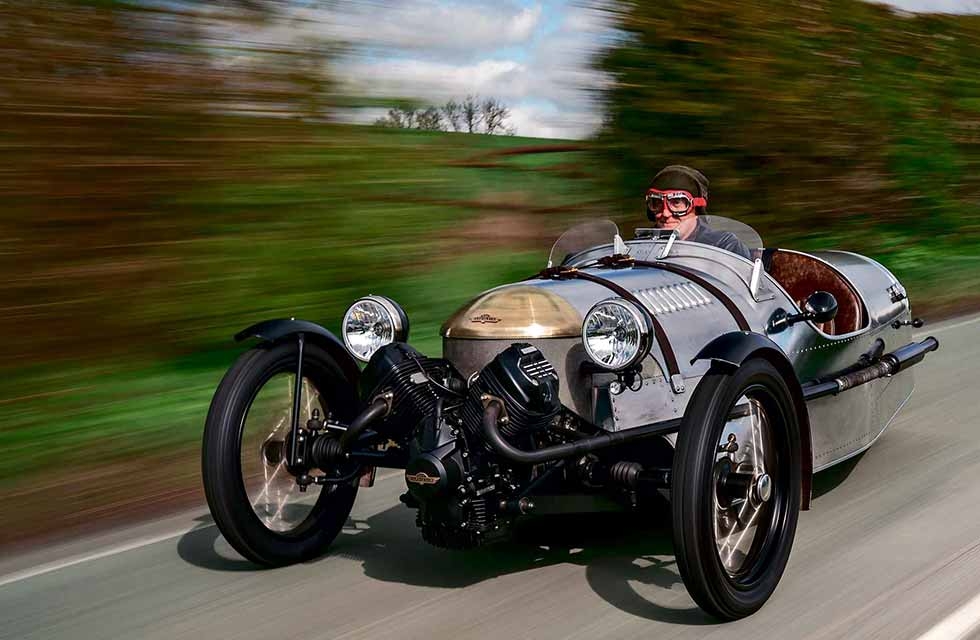 It comes from Malvern …but it’s not a Morgan, despite appearances. The Pembleton V-Sport has 2CV-based kit-car roots but comes fully built, with Moto Guzzi power. Words Andrew English. Photography Andrew Crowley.

A labour of love becomes a production reality

Turn the key and there’s an instant crackle, biff, batt-batt. The little car shakes gently as it warms. There’s vee-twin power at the front and, although Phil Gregory and his son Guy have signed an agreement not to reveal its source, it’s obvious that a Moto Guzzi unit is powering their £26,394 three-wheeler.

Ironic, this. While this air/oil-cooled vee-twin is most usually found sitting across the frame of Guzzi’s elegant motorcycles, the Giulio Cesare Carcano-designed unit first saw service in the ’60s powering a weird Italian Army tricycle, the Autoveicolo da Montagna. The engine was heavily revised by Lino Tonti for use in the first V7 Sport motorcycle, and in various forms it’s been in production ever since. Tough, reliable, free-revving and powerful, it makes a great legislation-compatible engine for kit-car builders.

‘THE COCKPIT IS SPARSE. THE SIDE-PANEL TRIMS ARE £245 EXTRA’

Not that the Pembleton is a kit car (well, not unless you live in America and you plead with the Gregorys), although it did start that way. When I tested every single three-wheeler on sale in the UK a few years ago, the Pembleton, created 20 years ago by Phil Gregory to circumvent the price structure of the Dún Laoghaire ferry, was one of the most charming. ‘My wife noticed that motorcycles and trikes went free, so she said I should build one. It was after a few ciders,’ he admits. ‘I ordered the steel, and we called it Pembleton after the name of the caravan we stripped for the aluminium.’

Gregory, one of those wonderfully instinctive engineers who often get left on the fringe of industry, had already built a Fordbased mid-engined coupé kit car with his brother, Roger. The first Pembleton, using chassis and drivetrain parts from a Citroen 2CV, also used that car’s flat-twin, air-cooled engine designed in the 1940s by Walter Becchia and Lucien Gerard, together with its four-speed gearbox driving the front wheels. It was known as the Pembleton Grasshopper Super Sport, and 450 examples were sold in three-wheel Grasshopper or four-wheel Brooklands kit form over two decades. Most were powered by Citroën engines, though owners also built them with Guzzi and BMW units.

‘It was only supposed to be for fun in the first place,’ Gregory says. ‘I wanted to make something a good hands-on guy could make a lovely car out of.’

Gregory was far from the first to discover a use for rusted-out 2CVs in kit cars. Chris Rees’ book, Three Wheelers A-Z, is full of them, though few sold as well as the Pembleton Grasshopper. And that’s where it could have remained, marooned up a charming motoring cul-de-sac, were it not for Gregory’s son, Guy, who between college and university decided to build his own version of his father’s car. That got him thinking harder about what it could be.

‘I always wanted to be making things; I was very hands on,’ Guy says. He thought the Pembleton could have a second life, still hand- assembled but sold as a fully finished car, built on a jig for accuracy, with laser-cut panels and a different engine.

‘I was very flattered,’ Gregory senior says. ‘I only started to worry when he said we needed a complete redesign. It’s been a massive amount of work.’ ‘the result of that work is that the new Pembleton V-Sport is a tangibly better-designed motor car than its predecessor and easier, cheaper and faster to build. The engine has the SVA test-friendly smoothed lines and flat mushroom fasteners, and the whole thing has the mien of something out of a proper factory rather than an admittedly well- equipped workshop attached to Phil’s home in Bayton, in the Malvern Hills.

‘Simplicate and add more lightness’ is a phrase attributed to Colin Chapman and also to Ford designer William Stout, but I’m told it originates with Stout’s colleague Gordon Hooton. I reckon all three would approve of the Pembleton, though. At 298kg dry, not much is lighter and more simplicated than this: a cockpit with basic comfort but no heater or cup holders, and certainly no traction control, ABS, autonomous braking systems or lane- keeping assist. You’re on your own out there.

There are several different versions of the Guzzi vee-twin; the Gregorys selected the fuel- injected, 744cc, 51bhp/44lb ft unit from the V7 III Stone model. You might wonder about the suitability of other power plants, but the most obvious alternative, Harley-Davidson’s 45-degree vee-twin, not only has a less refined potato-potato 315/405-degree firing duration than the 90° Guzzi’s 270/450 degrees, but it also sits in line with the frame and drives into a primary drive (chain or belt) rather than a conventional clutch. That can lead to severe driveline harshness.

In the Pembleton, the engine is mated to a reconditioned four-speed Citroen 2CV transaxle, which drives the front wheels. The suspension is all-new but follows the 2CV pattern with horizontal springs and dampers actuated via bell cranks and pull rods. It means die suspension is mounted low and loads are taken by the lower, stronger chassis members. All the brakes are discs, inboard at the front.

The cockpit is spacious but sparse; even the side-panel trims are £245 extra. There’s a great driving position and after some design experimentation the pedal layout now suits most sizes of feet. A decent-sized boot is secreted behind the rear seat and most of the engine is accessible under the bonnet. Even the front disc pads (a nightmare on a 2CV) look reasonably easy to change.

There are no doors, so you climb over the side and slide in, vintage-car style, from the passenger side and under the big wooden steering wheel. The gear lever sprouts out of the dashboard and the change is surprisingly accurate, having been redesigned widi rose joints. The clutch is sharp but light, and the wheels spin readily if you pull away too sharply because the Pirelli Scorpion tyres, although grippy, don’t have huge contact patches. Some rival designs use wider rear wheels to accommodate car tyres which are safer in the event of a blow-out, but Guy and Phil keep the large-diameter bike tyre at the back. It makes the Pembleton a purer-feeling thing, but you need to have a care.

The exhaust note is completely addictive and, with so little weight to pull, the little engine lights up in the mid-range with a satisfying machine-gun rattle. It’s good for 100mph and feels as though 0-60mph somewhere in the mid-sixes would be possible. And you can see everything, even the disconcertingly whirling driveshaft boots that indicate a slightly over-enthusiastic approach to CV-joint lubrication.

On the move that gearchange is quite lovely. The gate is inverted, with first towards you and opposite reverse, the action is fast and, with the lever just a finger’s stretch from the steering wheel, who needs a semi-automatic? The brakes are strong and progressive, though they will lock one of those skinny wheels quite quickly, and that Citroёn-based drivetrain means the turning circle is slightly wider than that of a manoeuvring supertanker. In extremis you can always get out, lift up the rear of the car and walk it round, as Guy demonstrates. The ride feels sensational, floating gently over bumps and undulations, but the rear will occasionally bunny-hop over sharper bumps, which is a feature of all three-wheelers with the single wheel at the back. As they say, if you don’t hit the pothole with a front wheel, you’ll get it with the rear.

And so to the handling, about which Tony Divey, the late Triking designer, once observed: ‘All three-wheelers are unstable. It’s how you use the instability that’s the important thing.’

Rear-drive three-wheelers such as Morgans and the Triking can be steered on the throttle by spinning-up the rear tyre, but the Pembleton’s front-drive layout rules out that possibility. This does make the behaviour more predictable for drivers raised on front-drive hatchbacks, though. Body roll is the main issue with three-wheelers, as the vehicle rolls onto a wheel and tyre that simply aren’t there. In the softly sprung Pembleton that tendency seems more pronounced if you go looking for it by waggling the steering wheel about, but if you don’t and simply get on with the business of driving, it’s not an issue.

That said, you need to understand what it can and can’t do. You can’t just barrel into a corner, hot-hatchback-style, and sort it out when you get there. You have to concentrate and drive properly with anticipation. I’ve raced and hillclimbed various three-wheelers over the years, and I never once felt anything less than full confidence in the Pembleton.

It’s been a couple of months since I drove this car and yet it hasn’t left my thoughts. I recall my ears glowing glacially, cold seeping like fog through my clothes, and road-repair debris flying up to cut my cheek. I remember gunning the engine for the sheer hell of it and wondering if I thought it possible to have more fun even in a car costing ten times more, with ten times the engine power and six times the weight. I decided I didn’t. I still don’t.

Initially I’d thought I’d want a hood (one is on its way), but a decent tonneau and waterproof jacket would be better. I’d certainly take the sports suspension of the show car I drove, and that vulnerable bare-aluminium floor should have the option of tailored rubber mats as well as the (£284) optional carpets. I also think that Guy and Phil are missing a trick in not offering decent-quality branded jackets, helmets and goggles. They might also consider selling ointment for the aching cheek muscles you get from grinning so much.

Left from top Not much roll stiffness with only one rear wheel; plenty of space under the bonnet, and rose-jointed gear linkage gives precise shift. Clockwise from above V-Sport is beautifully made with laser-cut panels; name came from a caravan; roomy cockpit is ultra-simple; Guy Gregory (on right) has re-imagined original design of father Phil (on left).