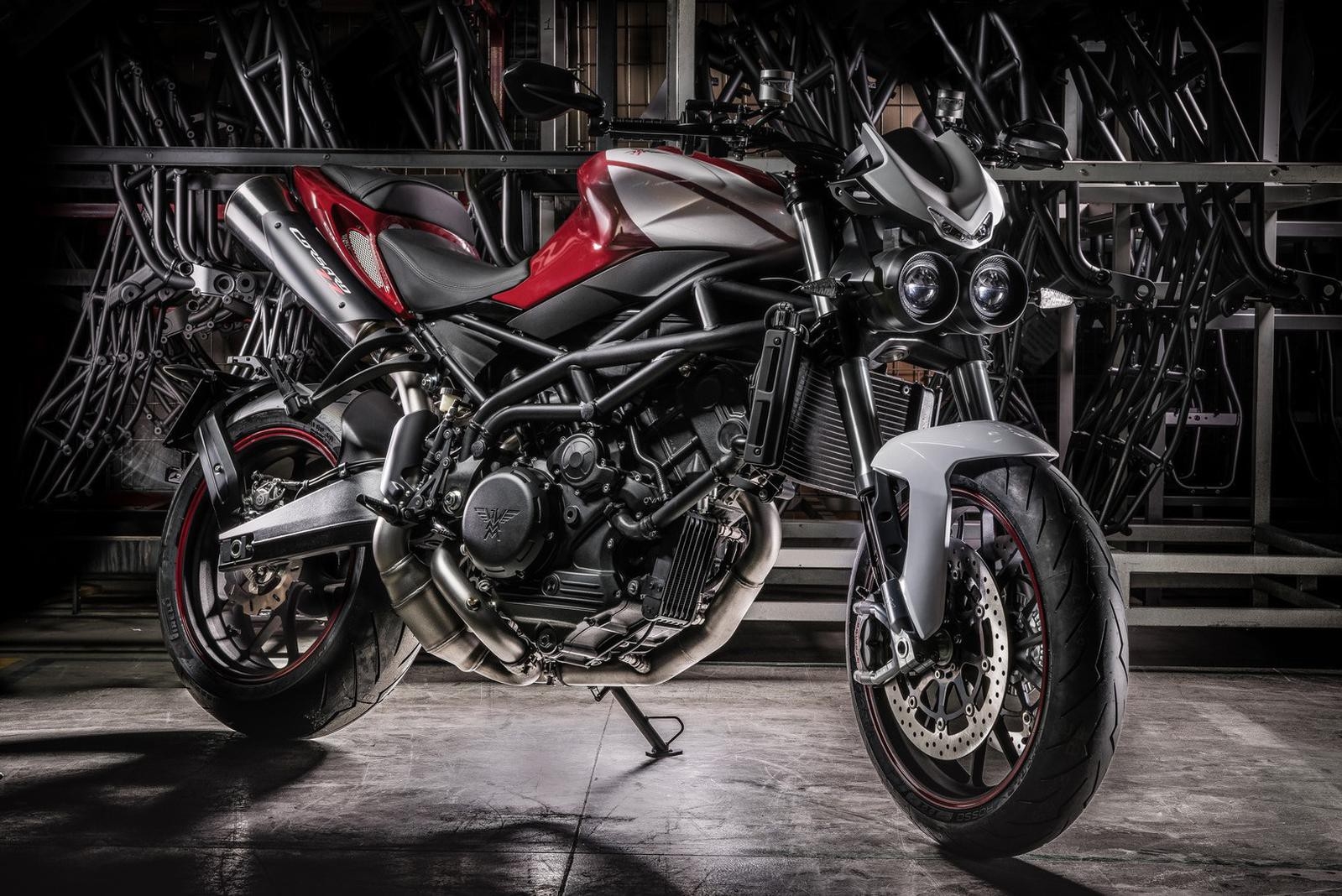 Morini’s grunt-laden Corsaro is back with some updates  to try to compete with 2018’s best nakeds: is it a welcome return or an ill-advised comeback?

SAMEAS IT EVER WAS 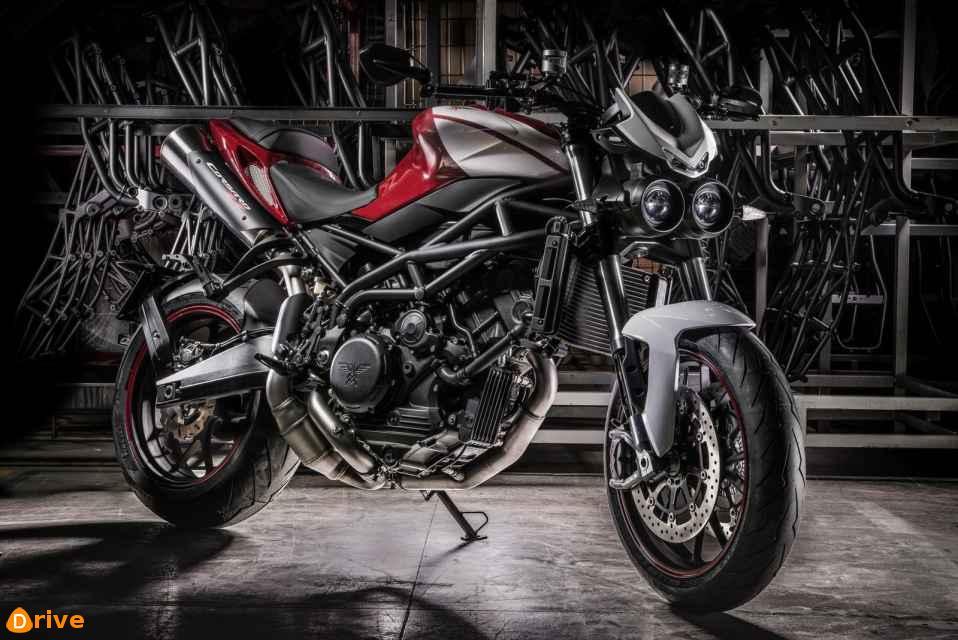 IF YOU WANT nothing more than exclusivity fromyour naked bike, the Corsaro’s the bike for you. Nobody knowswhat it is, who makes it, or even the country it’s from. Some going for a company in existence since 1937. They’re Italian, by theway… But in that time, they’ve not donemuch, so it’s little surprise they remain in a blind spot – a few air-cooled twins in the 1970s stand as their only memorable bikes.

Even thewebsite’s ‘company history’ section can only add a fewtiddler racebikes fromthe postwar era. But in2006, they built a 1200cc twin, andthe bike to go around it. Itwas a lovely thing. Considering the typical naked bike of the daywas a detuned sportsbike engine in a porky, low-spec chassis (with a few exceptions), the BialberoCorsaCorta lump’s grunt in a decent chassismade a nice change.But, the stereotypical Italian issues applied: poor dealer network and support, questionable quality (the last one PB tested spent thewhole test shedding components), and then inevitable company collapse in 2010.

They’re back again, with anupdated, Euro 4 compliant range, and a UK importer, Amore Moto, who also bring inwhatever Bimota get around to producing these days… If you’re one of the fewwho recalls the first generation Corsaro, the latest onewill be familiar: the frame, engine and geometry remain. The bodywork is almost unchanged, barring a numberplate and fender nowmounted on the swingarm, and some carbon bits.

There’s new suspension –Marzocchi checked out ofmotorcycle shocks a fewyears back, so it’s now running Italian firmMupo’s CNC-machined fork and shock parts. There’s a set of BremboM50 calipers, forged aluminiumwheels andaTFT dash to tempt you. Top-notch stuff. Before you get too interested, it costs ?17,900. ATuonoV4 Factory is the closestmoney-wise, but even that’s ‘only’ ?16k. 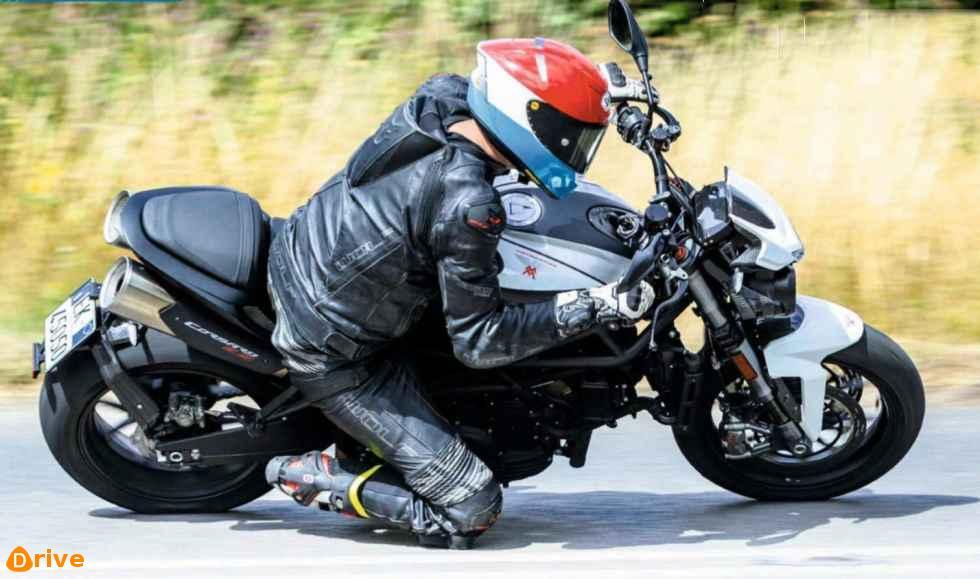 Bet that raised an eyebrow… Prepare to raise the other one: for that money, you get no riders aids, except a crude wheel speed-based ABS system. A quickshifter is listed on the spec sheet, but they’ve sincemade this a cost option, so this test bike didn’t have one.

Dialling it in This better be good.Or, at least, have some sort of whopping USP. The Corsaromade a bit of sense first time round, even if the sales networkdid it a disservice. Now, thewhole of Europemakes shit-hot naked bikes, and Japandoes a fewgood ones for notmuch cash, too. First impressions are poor: the forks are topping out sohard they clunk. The shock is super-saggy, and there’s no damping anywhere.

Rear sag needed a drastic reduction, andmore added to the front, and the damping ramped up all round to correct the attitude and control. With that resolved, it no longer feels like a bucking chopper, and it becomes a nice handling bike, albeit one that requires the hydraulic preload adjuster ratcheted up tomaximum, which is far fromideal.

TheM50s have the usual feel and power, and it laps up rural Rutland and Lincswith feel, agility and ground clearance in goodmeasure. There’s no steering damper, but it doesn’t need one. Themotor has a lovely clean response (the throttle is still a throttle – the plastic Domino