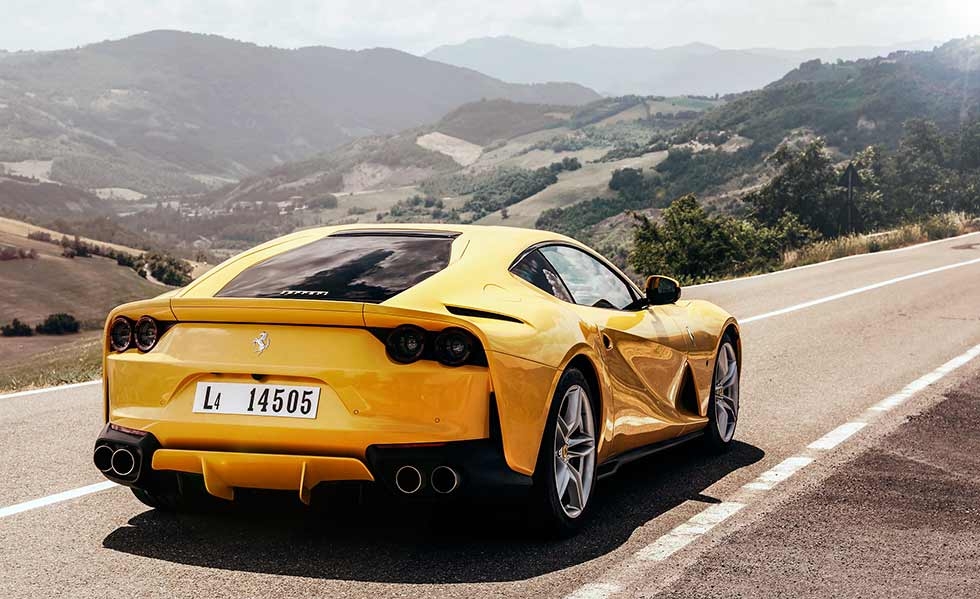 Superfast by name and nature Drive-My tests the only Ferrari that could outdo the old F12: the new 812 Superfast.

As a direct replacement for the mighty, arguably more beautiful F12, the Superfast has a very big mountain to climb. The F12, after all, was one of the great front-engined, rear-drive sports cars of all time, and when it appeared in 2012 it was hard to believe that Ferrari would ever go one better.

Yet here we are, just five years later, and the new $315,000, 211mph 2018 Ferrari 812 Superfast is upon us, boasting an incredible 789bhp from its ‘75% new’ 6.5-litre V12 engine and a raft of new electronic tricks up its sleeve – plus a controversial new look, clearly influenced by its plentiful aerodynamic upgrades.

The engine and gearbox still lie at the heart of the car, the V12 having swollen to 6.5 litres so that it produces more power and torque than any full production Ferrari in history. Its seven-speed dual-clutch gearbox has also been comprehensively uprated, with shorter overall gearing and faster-than-ever shift times.

The 812’s chassis has received the biggest makeover. It’s still a front/mid-engined, rear-drive car, just like the F12 was, but there’s a new electric rear-wheel steering system, torque-variable electric power-steering, a third-generation electronic diff, and a fifth-generation version of Ferrari’s side-slip control.

It weighs 60kg less than the F12 and there are new active and passive aerodynamic systems. These include a stalled underbody diffuser and scoops down its flanks that, combined with a new electronically controlled rear wing, help it generate ‘much more downforce but also significantly less drag’, claims Ferrari.

The 812 still wears relatively conventional non-Corsa Pirelli P-Zero rubber, with 245/20s at the front and 315/20s at the rear. It’s a small point in isolation, but it gives one of the clearest indications about Ferrari’s intention with the 812 – because from the Superfast’s tyre choice to its chassis set-up to its sportingly luxurious new cabin, it’s designed to be a road car first and foremost, not a track weapon.

On the road the Superfast feels intimidating, yes, mainly because of its size and expense. But after a while you begin to appreciate just how usable it feels, how soothing its suspension is (as long as you’re in one of the less aggressive manettino settings) and how manageable it is.

As in the F12 only more so, all hell still breaks lose if you prod the throttle with anything approaching enthusiasm. Indeed, the first time you rev the V12 right out to its 8900rpm limiter in a low-ish gear, the hairs on the back of your neck stand stiff, and the outer edges of your imagination become a little frayed. The 812 sounds that good under full beans, and goes so hard – Ferrari claims 0-62mph in 2.9sec but, more astonishingly, 0-124mph (200km/h) in only 7.9sec, with a top speed of 211mph.

Yet considering how potent it is, and how short the gearing has become, the Superfast has quite phenomenal traction. And that’s because Ferrari has avoided the kind of suspension settings that come with a track bias so, as claimed, it’s not as stiff as you might expect. That’s why it rides so well, and why it’s more comfortable than you’d imagine, considering how blisteringly quick it is on a track.

Even its steering has become a touch heavier, and a touch less frantic in its response in comparison to the F12’s. Again, this is to make it easier to drive on the road, although on the track its new 4WS system is still a touch too hyper in its responses for some tastes.

In the 812’s quickest configuration, Ferrari says it’s a staggering 1.5sec faster around Fiorano than a 488 GTB. In truth it’s actually more fun to drive (though slower) with all the systems switched off, when there are no electronics to get in the way and lots of ridiculously controllable power oversteer to relish. But that’s only because the chassis is fundamentally so well balanced.

And even with the various systems switched back in, the 812 feels incredibly safe to indulge in, especially on the road, but also refreshingly analogue in its behaviour. Probably Ferrari’s biggest achievement of all with the 812 Superfast is to have encompassed so much new technology in a car that still feels fundamentally like a good old-fashioned hot rod at heart. Whatever will they come up with next?