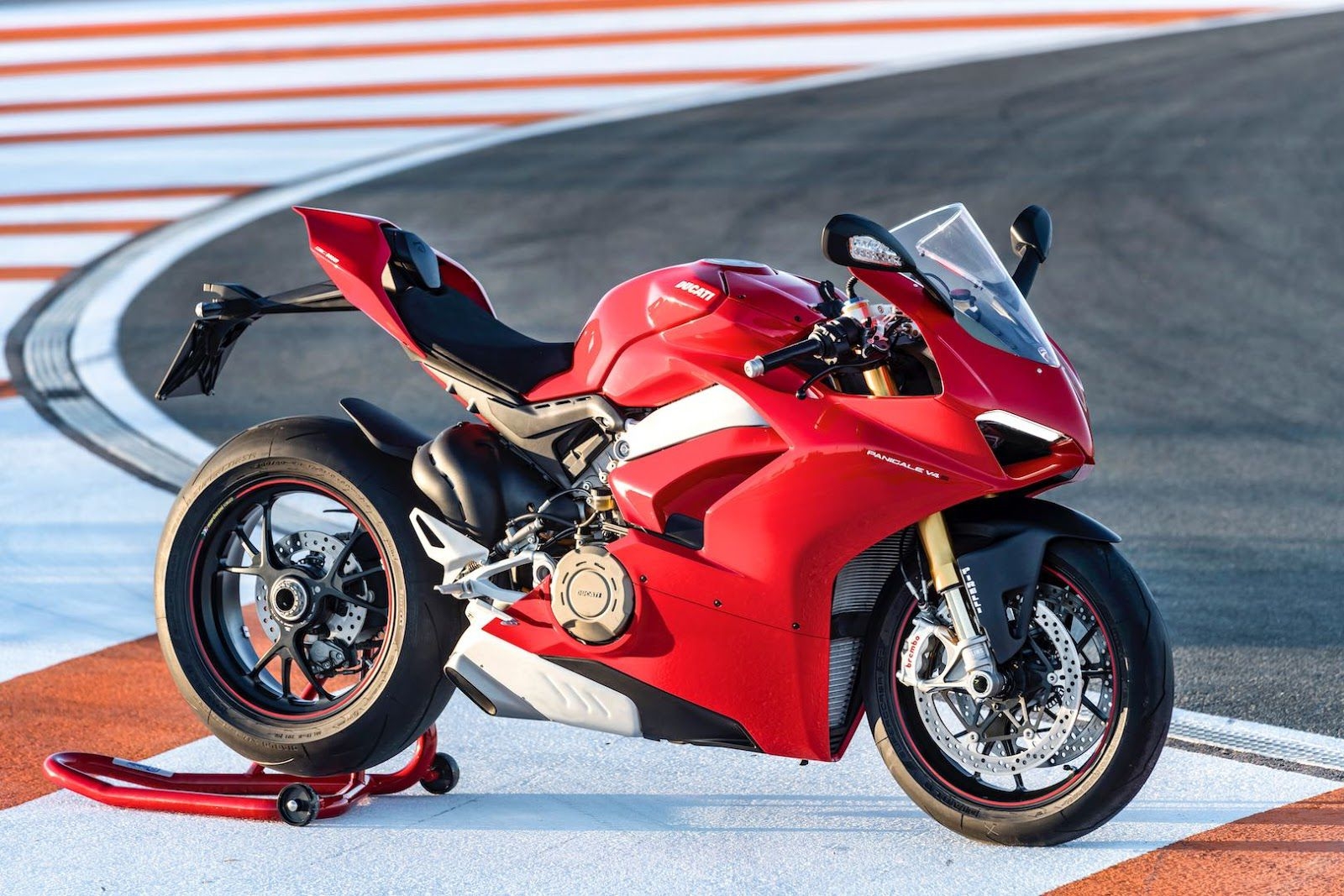 The Panigale V4 is fast, but at a price: the wild motor puts the potential to ride it hard beyond even Michael Rutter’s physical and mental capacity. Can it ever be tamed to reach its full potential without a MotoGP rider in the seat? We try one of the first fettled bikes in the world to find out 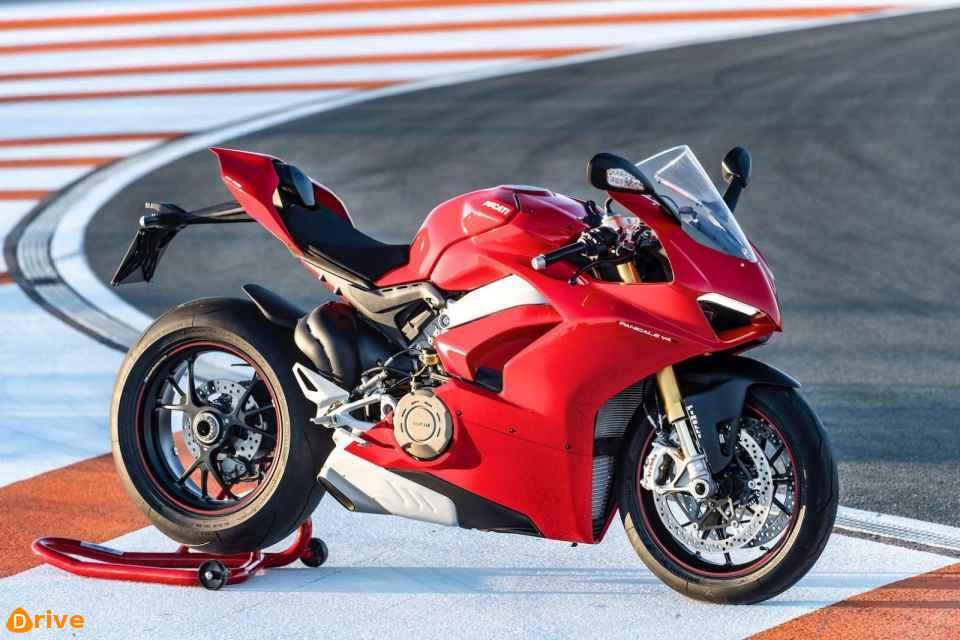 SPORTS BIKES HAVE been toomuch for about 30 years, apparently. But we seem to have stepped up to handling the responsibility. The 1992 FireBlade terrified the world with110bhp or so, yet we’re breezing aroundwith 190bhp and that’s OK. A 110bhpMT-09 is bought by novices these days… But there’s something about the Panigale V4 that feels different. Over 200bhp at the tyre, delivered in a torquey, super-fast-revving package, andwithout theweight of a ZZ-Ror Hayabusa to dampen its firepower.

Everybodywho’s ridden it, andwound it to the stop, has smashed into the rev limiter as it demands gears faster than you can think. It roasts tyres in a handful of laps and spins themon the rim. It physically andmentally drains you in away thatmakes an S1000RR feel like going for amassage.

Which is stunning, but sort of useless.Why pay a premiumfor something that belittles and humiliates you for not possessing the skill of the MotoGP test riders who helpeddevelop it?On the road, it’s possible to live inside the excess, but take it on track and it isn’t going to deliver satisfaction tomortals.

Motorrad Center Altendiez are a Ducati dealer, but also a race teamand supporter of German customers taking their bikes on track. When they got their first V4, they took it straight to a track to assess its ability. They were stunned, but also concerned with some of its traits, as their set-up guru Jorge Zebarra explains: “We have been racing BMWs for some time, but from 2019 we intend to race the 1000cc Panigale V4 R, so we wanted to see the potential by testing the 1100cc version. It is incredible, but very unstable and difficult to control on stock suspension, so we made some changes.”

MCA’s bike is a base-model V4, with a Showa shock and forks as standard. They wasted no time in ditching the shock entirely and fitting a fork cartridge kit to enhance the basic-spec model. They chose Mupo – not a name you’re likely familiar with, but think the Italian equivalent of Maxton/K-Tech, in that they’re well supported in central Europe and popular with racers up to national level, just not quite the international leviathan that Ohlins is. The shock body is 30mm longer, and spring rate is increased from 95Nm to 100Nm. 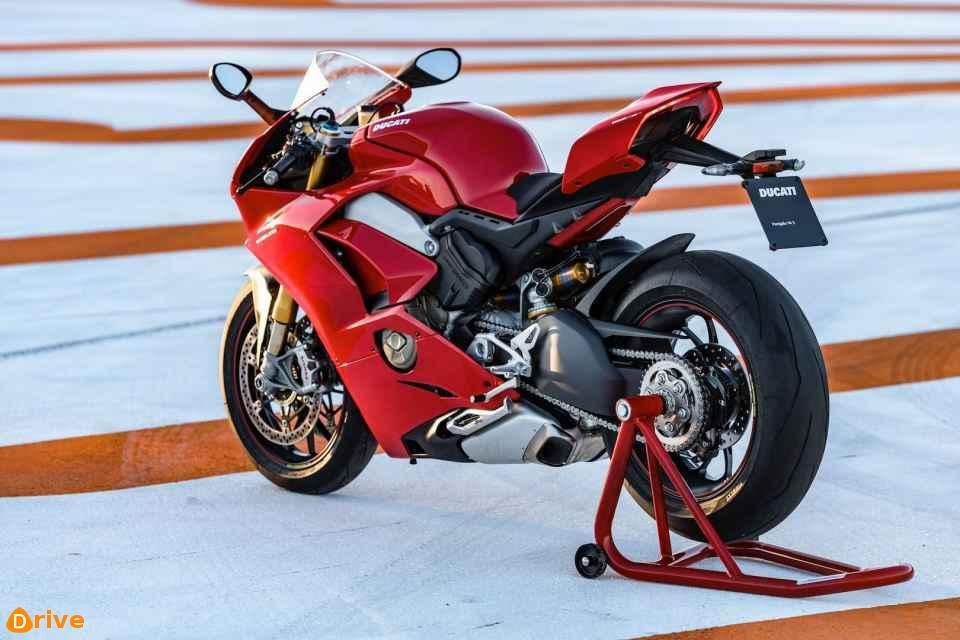 Up front, the 100Nm fork springs are replaced by a 100/105Nm combination to give the desired 102.5Nm average rate desired. Fork stroke is increased by 10mm, too, and air gap reduced by 10mm. The taller front and rear have increased the wheelbase by 5mm. It retains the original non-adjustable steering damper for now, as a replacement wasn’t available in time for the development work to commence. Bolt-on options elsewhere are limited: Ducati’s official rearsets went on, as well as the Akrapovic full system and corresponding ECU map.

So Jorge got creative to help improve the Ducati’s ease of use. “The locating pegs for the handlebars have been removed to allow the bars to be fitted at a shallower angle – only 2mm rotation from standard, but it helps. The Ducati Performance seat is 20mm higher than stock, so the riding position gives more control. The braking system uses a Magura HC3 master cylinder and direct brake lines to bypass the ABS.” The overall result is essentially taller, longer and firmer,withmore direct brake control, reduced weight and better fuelling. Oh, plus more power and torque…

Can you handle it?

MCA entered their work-in-progress in the PS Tuner GP: a shootout organised by PB’s German language counterpart for specials, race bikes and the like, and attended by yours truly this year, so I got a go. Technically, it’s one of the least special bikes in the competition. But it was also one of the fastest with German racer Lukas Tulovic on board. The competition is held at the Lausitzring – a largely unsatisfying circuit on a personal level, but with a good mix of slow/fast corners, bumps, smooth surfaces and big braking/ acceleration zones.

Plenty of opportunity for a wayward bike to expose itself. MCA’s Pani is as familiar in feel as you might expect – still a ferocious motor, still blessed with incredible feel and agility, but more together,more in control. Lots of little details, and a few medium-sized ones, accumulate into a significant improvement in getting a grip on the Bolognese beast. Weight transfer is reduced both on the power and on the brakes, allowing you to stop and go much faster,with greater stability and control.

Stability out of slow to mid-speed corners in particular is improved, though some of the circuit’s high-speed bumps, ripples and surface changes still get the better of the standard steering damper, though it never breaks into full lock-to-lock nastiness. The seating position is better, too – being higher with a better handhold on the bars reduces the effort needed to counter the bike’s constant efforts to eject you. 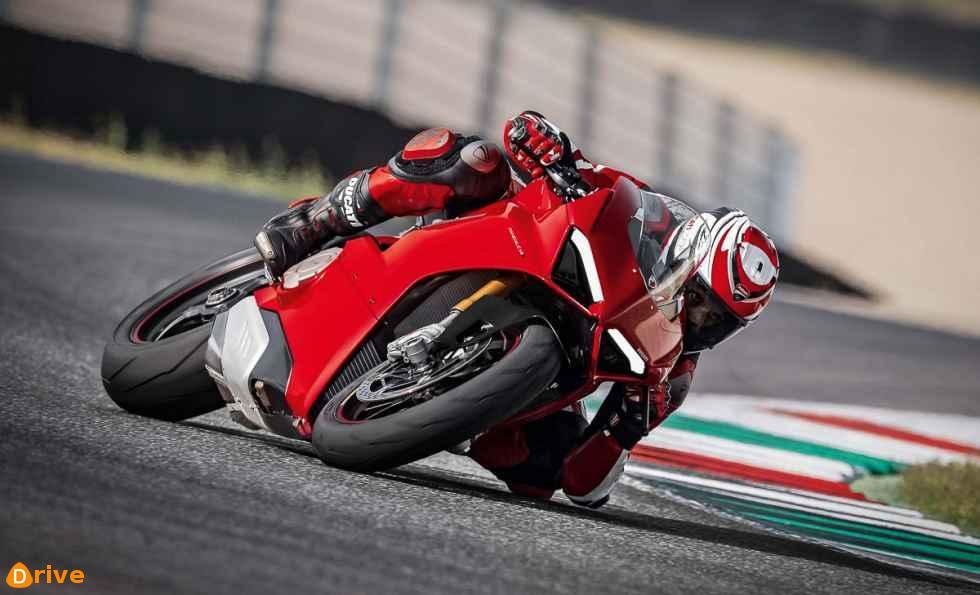 Taming’ is a relative expression when talking about the Panigale V

The switch to a Magura master cylinder has softened the initial take-up of the lever but kept the incredible outright stopping power of the Stylema calipers – another little detail easing the burden and helping you dig the front tyre in without getting the bike out of shape. There is a penalty: the stronger fork springs are less yielding overmidcorner ripples. They need more load to work fully, and the 20-minute session I got wasn’t enough to dial into the bike and really get up to speed, though this track is bumpier than most.

It’d be similar on some of the UK circuits suffering from rucked-up tarmac caused by car racing. Going faster might be the answer, but that’s easier said than done on a bike that already makes incredibly high demands that push you to the absolute limit of physical and mental reaction times… But it’s a big step in the right direction: from here, I’d maybe lengthen the gearing to tame the thrust and increase the wheelbase a little more for a two-pronged attack on wheelie/spin/slap tendencies.

Ducati’s quickshifter is also very abrupt and sensitive to lever contact – I managed to trigger the kill without shifting twice, as well as other times on V4s I’ve ridden. But it’s early days: as well as my subjective observations, I was able to stay out on track for the full session without feeling like I’d been thrown in a thresher, and the rear tyre (a Pirelli Superbike slick, admittedly) stood up to the abuse far better than we’ve seen before. That excess in performance may yet be reined in.