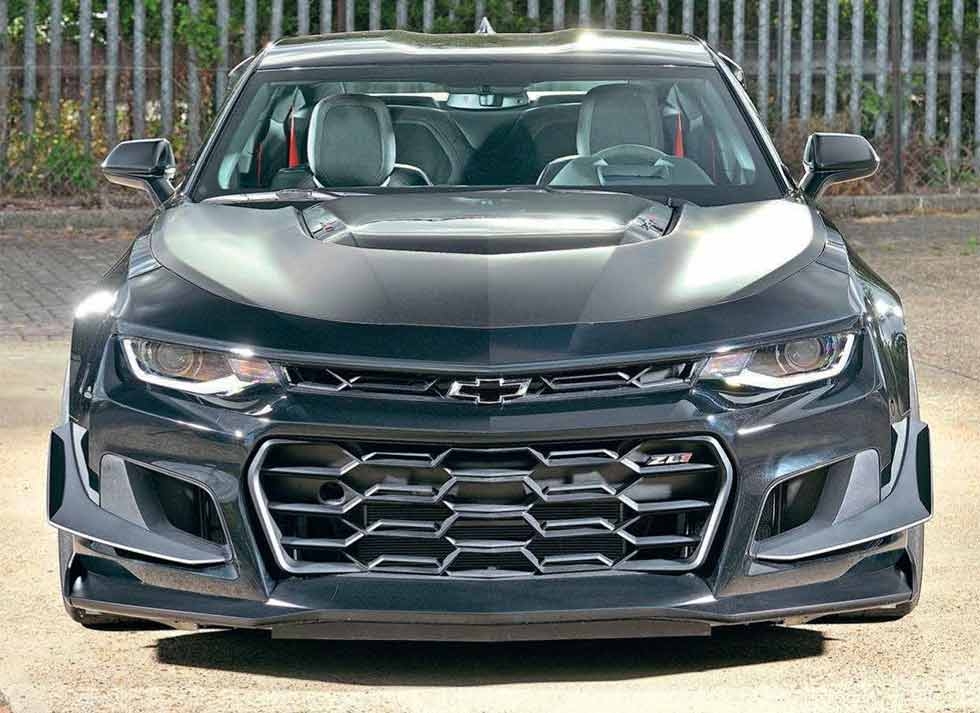 Modern American Chevrolet’s mighty 2018 Camaro ZL1 delivers performance and then some and you can find one just like this at David Boatwright Partnership, but hurry they’re getting snapped up fast! Words: Huw Evans Photography: Matt Richardson.

In Camaro folklore, ZL1 has special meaning. First conceived back in the 1969 model year, it signified Central Office Production Order (COPO) 9560 which allowed General Motors to stuff a monster, all-aluminum 427 cubic inch big-block V8 into its new pony car, creating an instant muscle era legend. Although rated at 430 horsepower, the actual output was around 500hp.

When you figure that the aluminum 427 lump weighed about the same as a small-block 327, the Camaro ZL1’s power-to-weight ratio was considerable. All of the 69 ZL1s built came with a standard cowl-induction hood, power front disc brakes, GM 12-bolt rear axle with 4.10 gears and posi-traction limited slip, plus either a heavy-duty four-speed manual gearbox or TH400 three-speed automatic. Intended strictly for drag racing, the ZL1 could run the quarter-mile in the low 13-second range in factory trim. Adding headers, slicks, traction bars and a good driver, netted 11 seconds. Yet all this performance came at a price, and in 1969, $7200 was a hefty sum (the aluminum engine cost $4160 alone).

Nevertheless, there wasn’t a faster muscle offered by Chevrolet during the golden era and the ZL1 moniker has since passed into legend, so much so in fact, that the Bowtie boys decided to bring it back for the 21st century.

It began in the 2012 model year where a super Camaro, powered by a 580 horsepower 6.2-litre supercharged V8 was introduced. This author got the chance to test this new version on both the street and drag-strip, where it repeatedly tore off 12-second quarter-mile passes at Indianapolis Raceway Park.

Yet, unlike its illustrious 1969 predecessor, this wasn’t a temperamental, drag-strip-focused quarter-mile thrasher. It was as docile as a base V6 Camaro, came as either a coupe or convertible and featured such niceties as power adjustable seats and climate control. It was, in every sense, a true high-performance all-rounder, showcasing the pace of progress since the glory days of Detroit factory hot rods.

The ZL1 proved to be the high-performance standard bearer of the fifth-generation Camaro line-up, so when the next-generation Chevy pony car debuted for 2016, it was pretty much a foregone conclusion that the ZL1 would return.

Debuting for the 2017 model year, the latest Camaro ZL1 sports a supercharged 6.2-litre small block − in this case the 650hp LT4, teamed with either a six-speed manual gearbox that’s rev-matched to the engine for maximum thrust, or 10-speed automatic with a manual shift mode incorporating steering wheel paddles.

All this hardcore performance results in a pony car that will accelerate from 0-60 mph in just 3.4 seconds and charge through the quarter-mile in 11.5 at 125mph (even faster than the mighty 707hp Dodge Challenger SRT Hellcat, although the latter boasts a slightly higher trap speed).

Yet the ZL1 is no mere straight-line screamer; the car’s stiff structure, advanced fully-independent Magnetic-Ride Control suspension, along with those monster brakes and tires, means it’s just as capable on the twisties. In fact, it boasts higher lateral g cornering (1.04 g) than almost any competitors, including the Hellcat, BMW M4 Competition Coupe and Shelby GT350.

Despite all this grandstanding performance, like its fifth-generation Camaro predecessor, this is one car you could still drive every day if you wanted to. It comes with all the mod-cons you could ask for, including a heated steering wheel, power adjustable heated and cooled front seats (with memory settings for the driver’s chair), power adjustable pedals and tilt/telescoping steering wheel, plus automatic dual-zone climate control.

However, all this hardware and grandstanding performance doesn’t come cheap. In the US the ZL1 starts at $63,795 (a base Camaro goes for less than half of that) though compared to some European high performance offerings, it still represents good value considering the performance on tap.

For an additional $7500, buyers can opt for the 1LE Track Pack option (coupe only) which adds aerodynamic aids in the shape of a carbon fiber rear wing, along with functional front fascia mounted dive planes and air deflectors to promote better downforce at speed, lighter wheels, thinner rear window glass and a fixed back seat, plus a whole host of suspension changes.

These improvements netted a lap time of the infamous Nurburgring Nordschleife of just seven minutes and 16.04 seconds. That’s supercar territory and 13.56 seconds quicker than a regular ZL1 with a 10-speed automatic!

Transmission options are either a six-speed manual or a 10-speed automatic gearbox.