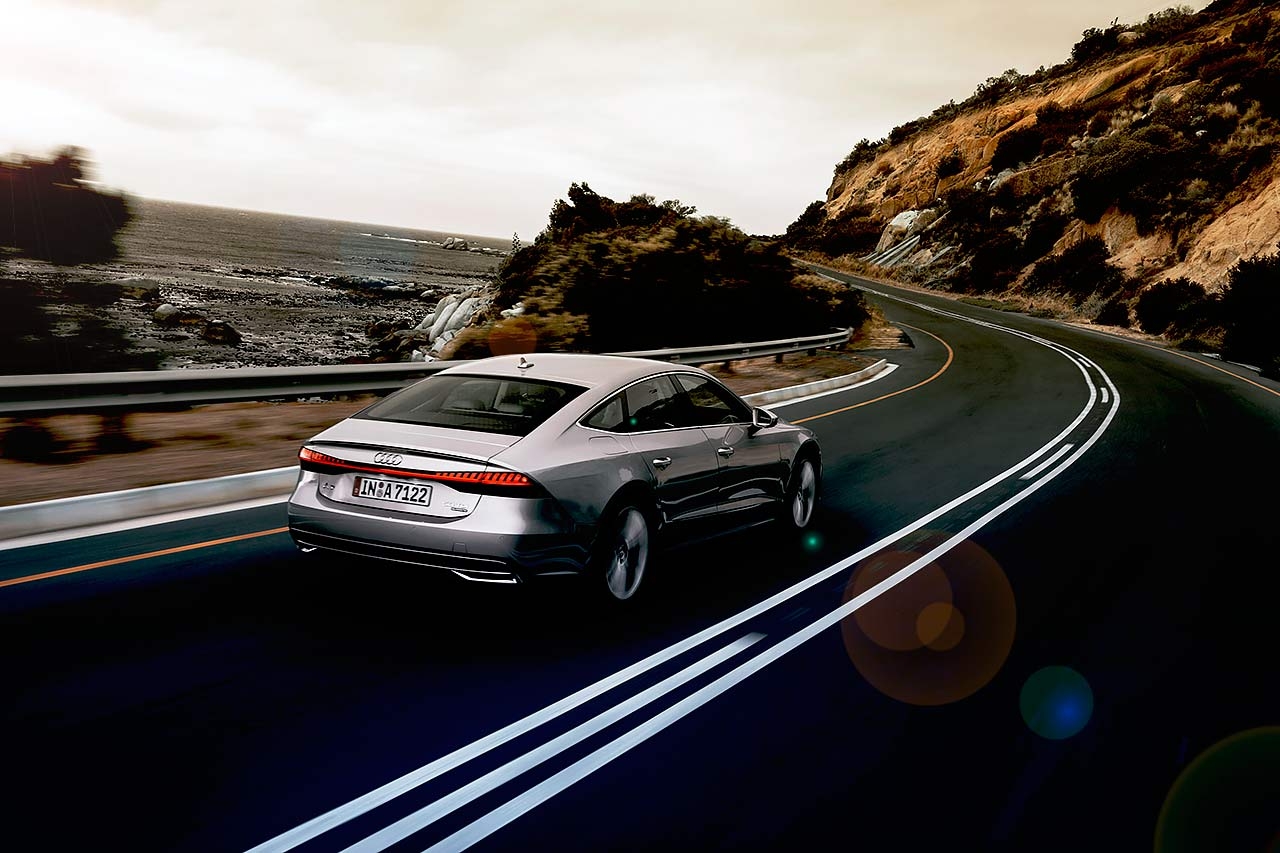 2018 Audi A7 Sportback C8 Type 4K. It may hit the style bullseye, but this new five-door coupe’s drive is wide of the mark…

Audi says its new A7 Sportback combines the elegance of a coupe, the functionality of an estate and the prestige of a luxury saloon. It’s difficult not to imagine that in trying to combine the qualities of three cars it will end up being slightly worse than each of them at those respective disciplines. So how does it fare?

The original A7 was one of the more successful proponents of the four/five-door coupe genre in terms of its styling, and the latest one is the same. It’s still handsome, the sweeping roofline coming to the same abrupt, Kamm-tail halt, and there’s now a little more definition to some of the lines along its flanks, while the nose and tail are pure modern Audi. Functionality? Well, it stands to reason that you’ll fit more in the rear of a square-backed A6 Avant than in a slash-roofed A7, and you’d have an easier job getting awkwardly shaped loads into the proper estate too.

Cabin-wise, though, the A7 is a step ahead, thanks to architecture, space and quality inspired by the larger A8. It feels expensively trimmed and immaculately built, and the driving position is beyond reproach. Acoustic glazing and the car’s slippery shape mean the cabin is little louder at speed than at a standstill. Interaction with most minor controls is now through a pair of touchscreens, each augmented by a convincing use of haptic feedback to deliver a button-style feel to every prod. Smartphone-style swipes and pinches work too, and the screens’ handwriting recognition is good enough that it’s not beyond being useful on the move, unlike some.

Despite all this, it’s still the final hurdle over which the A7 really stumbles. In designing a car aimed at luxury buyers, but feeling compelled to imbue it with some sportiness, the resulting compromise doesn’t quite hit the spot.

An uncomfortable ride is largely to blame. We tried two different adaptive, air-suspended cars and both struggled with bumps; the Sport-spec example on 20-inch wheels suffered less, but it still sent vibrations through the cabin, eradicating the A7’s refinement.

The trade-off is taut body control, but with direct yet reticent steering and a kerb weight of over 1800kg, neither car was involving, nor particularly agile to drive.

The 3-litre V6 engines, one petrol, one diesel (335bhp and 369lb ft for the 55 TFSI, 282bhp and 457lb ft for the 50 TDI) – are better efforts. Both are matched with quattro all-wheel drive but each uses a different gearbox – seven-speed dual-clutch on the petrol, eight-speed ZF auto for the diesel. Both engines are refined, tuneful and hushed at speed, their performance enhanced and economy improved with Audi’s 48V mild hybrid technology.

If the new A7 was a little more comfortable, the inert chassis wouldn’t be a particular issue, and were it more entertaining, we could live with the sudden ride. With a little more tweaking (we’d be keen to try examples without all-wheel steering and on regular adaptive dampers) Audi’s efforts to combine style, practicality and luxury could be much closer to the mark.