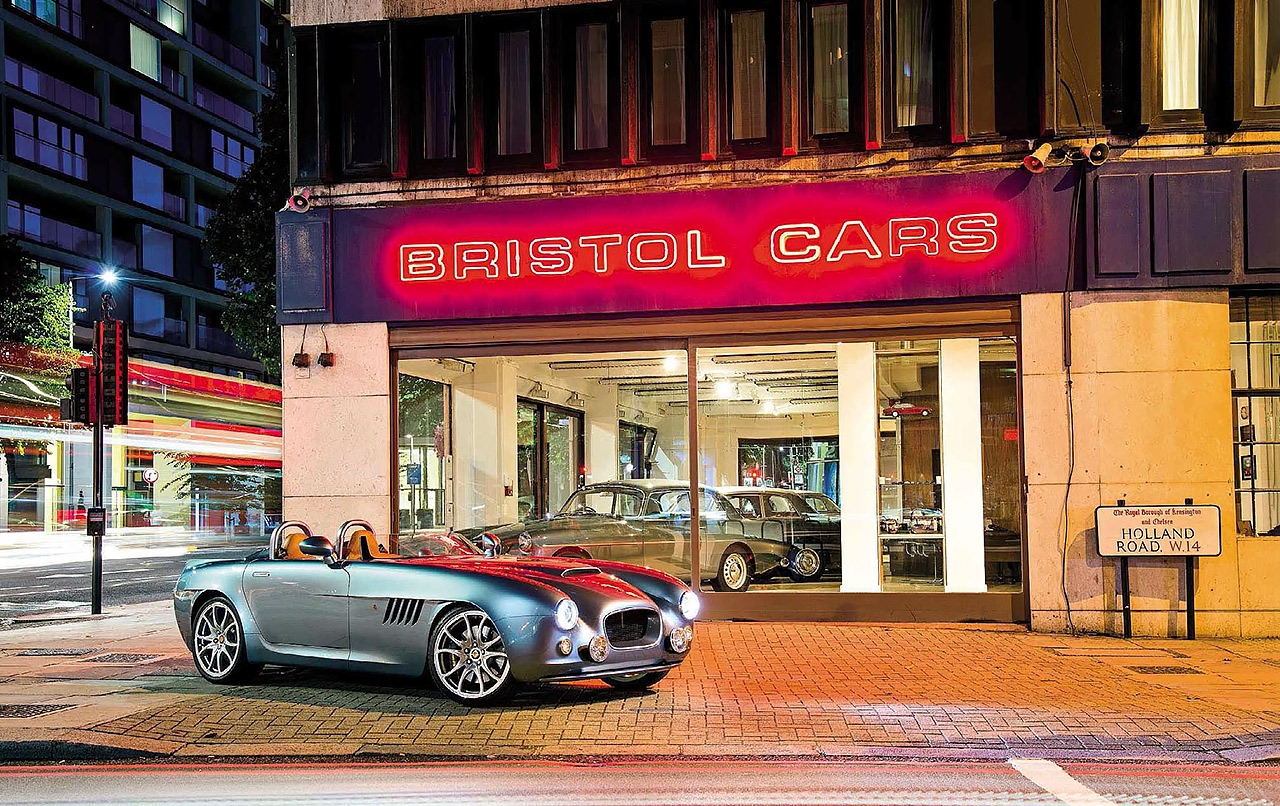 Bullet points. Bristol bullet. Love it or hate it, we have the exclusive! The first new Bristol in more than 10 years weighs 1135kg and has a 370bhp V8. Sounds promising? Words Mark Dixon. Photography Paul Harmer.

Pity the poor chaps at Bristol. There they were, gearing up for the launch of their exciting new speedster, when some rotter spotted the prototype in a layby in the middle of nowhere and took a few snaps. Despite their entreaties, the pictures ended up splashed all over the internet within hours. Those photos didn’t do the car justice. For one thing, it was riding on a set of slave wheels rather than the production-spec alloys that (as we now know) suit it much better. But the Bullet, as it has been dubbed, is one of those cars that you really have to see in the metal – or, in this case, the carbonfibre – to appreciate. The spyshots frankly left us underwhelmed. Having spent some time with the real thing, we’re rather taken with it.

Right from top. Side and rear three-quarters are arguably the Bullet’s best views; interior is superbly trimmed, with much use of machined alloy. 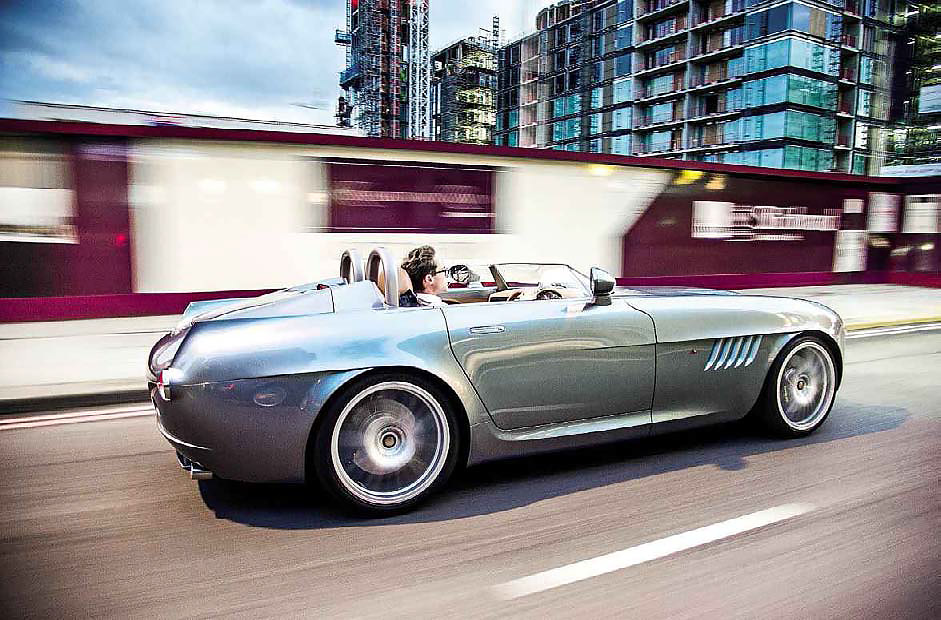 Sadly, because the one-and-only Bullet prototype was not quite ready to be discharged at high velocity when we photographed it, we can’t bring you full driving impressions just yet; they will have to wait until later this autumn. But low-speed outings around a country estate and – exclusively to Octane – on the streets of Kensington offered a tantalising glimpse of what could be on offer here. The Bullet has a 370bhp BMW V8 pushing along just 1135kg. As the saying goes, what’s not to like?

The obvious retort to that rhetorical question might be ‘the styling’. We’re not totally convinced by the LED headlights, with their miniature central cores that seem visually at odds with the big 19-inch alloys immediately aft. It’s one of the conflicts that arise when trying to incorporate some major retro styling cues – the 404-style ‘jet engine’ air intake and vented bonnet – in a contemporary vehicle. The narrow splitter and diffuser front and rear are fixed, by the way, but Bristol says that active aero could be a future development.

That small reservation about the lights aside (and, it has to be said, the LEDs are impressively bright), this Bullet makes quite an impact, and in a good way. The finish of the body is superb, with even shutlines and a flawless paint job. The side profile and rear three-quarter views are particularly striking and, while the combination of circular tail-lights and raked-forward rear fins references the Bristol 405 of the mid-50s, the Bullet presents them in a much sexier, more exotic kind of way – think Ghia SuperSonic meets Bertone BAT car. 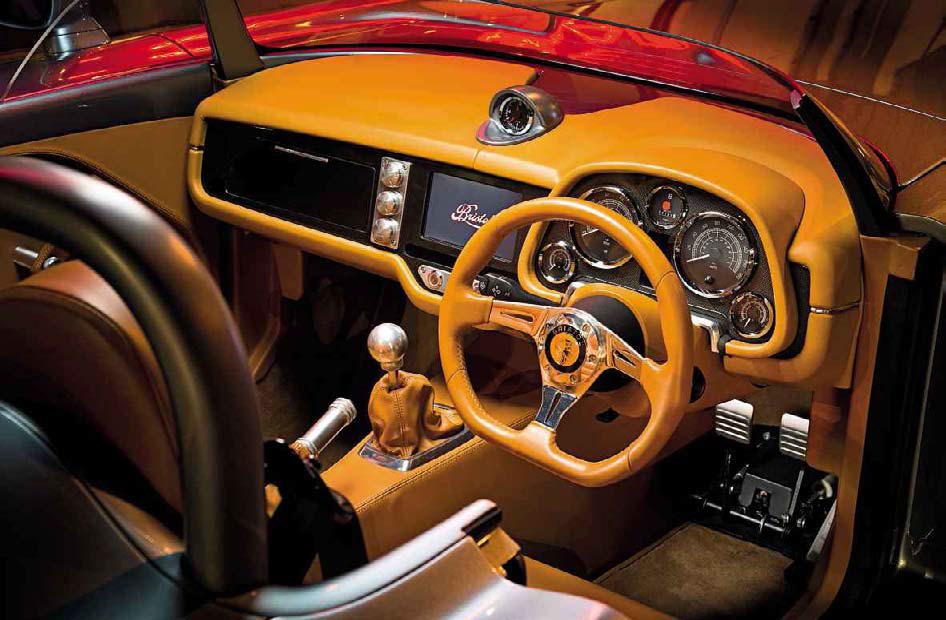 A mention of Italy is appropriate here because Bristol says that the Bullet was designed in-house, with advice from an unnamed Italian stylist at a carrozzeria ‘which isn’t Zagato’. It’s not Touring, either, even though you may discern hints of Touring’s current Alfa Romeo Disco Volante Spider in the Bullet, particularly the headrest fairings and the rear detailing. The colour is not dissimilar to the Disco Volante’s, either, although Bristol claims that its own particular shade of metallic blue was inspired by the original Bullet prototype from the 1960s.

The what? Yes, there was a previous Bullet; two incarnations, if you count the 1920 Bristol Bullet racing biplane that was built by the parent aviation company. The earlier roadgoing Bullet is something of a mystery. The current owners of Bristol found it languishing under a cover when they acquired the company in 2011. It wears a 1966 VIN plate, suggesting a 409/410 chassis, and it’s often claimed that it was a factory development vehicle used for testing engines. The truth seems to be that it dates from the Toby Silverton era of the early 2000s and was the prototype for two production versions, known as Blenheim Speedsters. One car went to the USA; the other – which has a full-height windscreen, conventional hood, and looks like a modernised 405 drophead – is in private hands in the UK. We featured that in Octane 131.

As the young people say, ‘Whatever’. The new Bullet clearly draws inspiration from its predecessor but it is a massively more sophisticated car. Leaving aside the fact that it’s better proportioned, with a short wheelbase that’s more reminiscent of the 404 coupé than the later saloons, it is totally different in construction. Rather than the aluminium traditionally used for Bristol coachwork, the new Bullet has a carbonfibre body tub. It’s no coincidence that Bristol’s current owners have a carbonfibre plant on the south coast of England, and being able to use this material-of-the-moment explains the Bullet’s remarkably low kerb-weight.

Following Bristol’s insolvency in 2011, it was rescued by Indian-born businessman Kamal Siddiqi, whose Kamkorp group of companies also includes Frazer-Nash Research Ltd. Mr Siddiqi is a self-confessed petrolhead and serial entrepreneur, who trained as an automotive engineer; his three sons are also young engineers. Mr Siddiqi’s main automotive passion is for electric and hybrid technology – future Bristols will undoubtedly be going down this road – and the Bullet has been the pet project of eldest son Noamaan.

Noamaan explains that carbonfibre allowed Bristol to do things that would have been much more difficult in aluminium, notably with the radii of body curves and creases. ‘The styling posed some real problems for homologation, in terms of safety requirements, and carbonfibre was more amenable than alloy for meeting those needs.’

Left and below. Bullet sits well next to classic examples in the company’s showroom; it’s a joy to drive around the city at night.

The chassis consists of bonded box-section aluminium, while the drivetrain is essentially BMW: a 4.8-litre V8 mated to six-speed manual or automatic gearbox. The V8 has been given a bespoke engine management system and it’s dressed up with Bristol cam covers and inlet shroud; Bristol has dubbed it the Hercules, in tribute to the aviation company’s famous 1300bhp, 14-cylinder radial engine. It sounds beautiful, the note from its twin exhausts striking just the right balance between muscle car and gentleman’s express, and while you can’t fail to be aware of it when on the move – the Bullet’s bathtub-like cockpit sees to that – it’s always addictive rather than annoying.

Getting into or out of that cockpit requires a certain dexterity, due to the bodyshell’s wide sills, but the doors open generously wide and you can at least plonk a hand on the rear deck to steady yourself without fear of leaving a dent, before dropping into the figure-hugging but not bum-pinchingly tight seats. The steering column is fixed on this prototype, so the small-diameter wheel cuts across your view of the instruments if you’re tall, but that will be addressed for production cars.

Inside, it’s appealingly simple, if a little unsubtle in the detailing, with much use of machined aluminium. There’s a pool ball-sized alloy gearknob, a knurled alloy handbrake grip that looks like a nerve gas canister from a James Bond film, shiny alloy steering wheel spokes – the list goes on.

In such traditional and manly company, the plastic multifunction turn signal switch looks distinctly out of place; paradoxically, it left us wanting more machined alloy. There’s also leather. Lots of leather. Every surface bar the dashboard – which can be finished in polished wood, herringbone-pattern carbonfibre or unidirectional carbonfibre – is swathed in the stuff. It’s good to see a nod to Bristols of old in the shape of the dash binnacle, although the glitzy, thick-rimmed bezels for the instruments might not have been to the taste of the longtime MD of Bristol Cars, the late Tony Crook, whose experience as a WW2 RAF pilot doubtless explains why he preferred functional, non-reflective black.

What Mr Crook would have made of the Bullet’s touchscreen display can only be imagined. A large ‘Bristol’ logo illuminates when you turn on the ignition, and the press pack talks of wireless streaming of audio, Bluetooth connectivity, digital radio and all the rest of today’s musthave gizmos. We could live without most of that, although – as anyone who has struggled with the built-in satnav systems of certain supercars will testify – the ability to ‘screen mirror’ your favourite satnav application from your smartphone could prove rather useful.

Still, these are toys for the modern generation, and the Bullet itself is undeniably a toy, much in the manner of Jaguar’s Project 7: something that’s best enjoyed for short blasts in temperate climes. The Bullet’s impressive power-to- weight ratio certainly promises plenty of amusement.

Indeed, while the chassis incorporates Electronic Stability Control, we suspect that it won’t be difficult to break traction in several gears. Perhaps the Bullet’s unsuitability for rainy weather (there’s no kind of soft-top whatsoever, although a rain hood is promised) will prove a blessing in disguise for some drivers.

At the time of our photoshoot, the Bullet prototype was still very much a work in progress. The unique alloy wheels, whose spoke pattern echoes the Bristol shield logo, are pre-production samples and reputedly ‘soft as butter’. No surprise, therefore, that Bristol is being ruthless in refusing to let anyone drive it. Even from the passenger seat, however, you can sense the Bullet’s rigidity, and it has impeccable credentials: design is by Multimatic, the Canadian outfit that does a lot of work for Aston Martin, among others. Multimatic produced the suspension and carbonfibre tub for the One-77. ’Nuff said.

Despite Bristol’s reputation for making true driver’s cars – albeit sometimes at the expense of aesthetics – in today’s world it’s tempting to conclude that the way the Bullet goes is almost secondary to the way it looks. During our evening shoot, the reactions of the blasé, seen-it-all-before West Kennites were instructive: in a part of London where supercars are just part of the street furniture, the Bullet stands out because it is, well, unique. 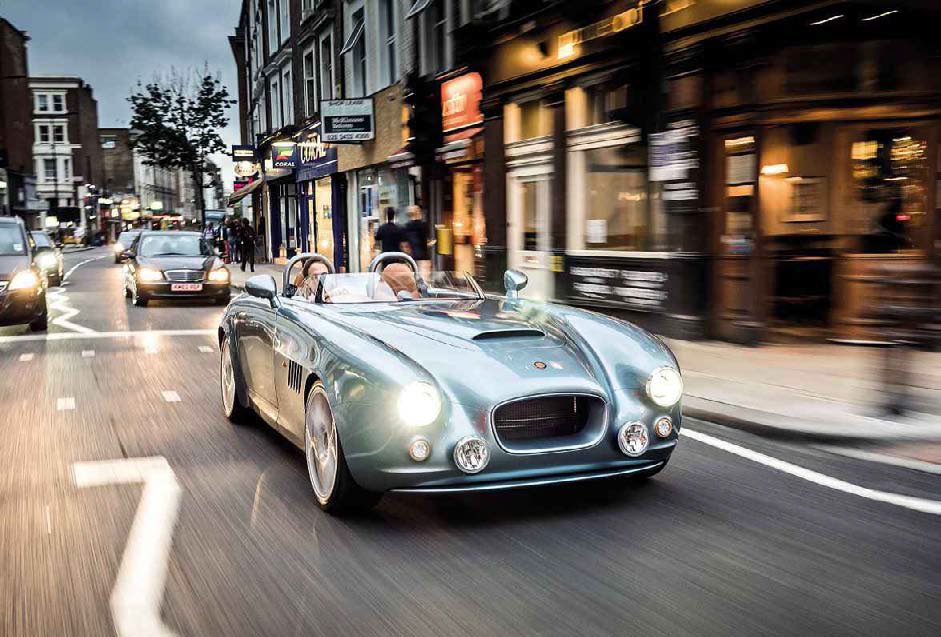 Above and below. Bullet looks like nothing else on the roads and will always be a rare sight, with only 70 cars planned for production.

It won’t remain unique for much longer, with deliveries slated to begin in early 2017. Just 70 examples are planned for production (neatly commemorating 70 years of Bristol Cars, since the 400 was launched in 1947), although it won’t officially be available in the USA for reasons of homologation. The price, while steep, isn’t ridiculous for this sector of the market: £200,000 plus taxes, which will bring it up to about £250,000 all-in. Sounds a lot? Maybe, but there’s a petrol station in Kensington that charges £1.79 a litre for unleaded. Everything’s relative.

We’ll be frank: when we were invited to the launch of the Bullet, we had mixed emotions. Small-volume supercars by the revivals of famous names don’t have a good track record. But we came away feeling cautiously optimistic. Of course, we’ll have to wait until we’ve actually driven the Bullet before we’re totally convinced. From what we’ve seen so far, however, if this Bullet has your name on it, you’re unlikely to be disappointed.

‘The Bullet references the 405 of the mid-50s but in a much sexier, more exotic way – think Ghia Supersonic meets Bertone BAT car’