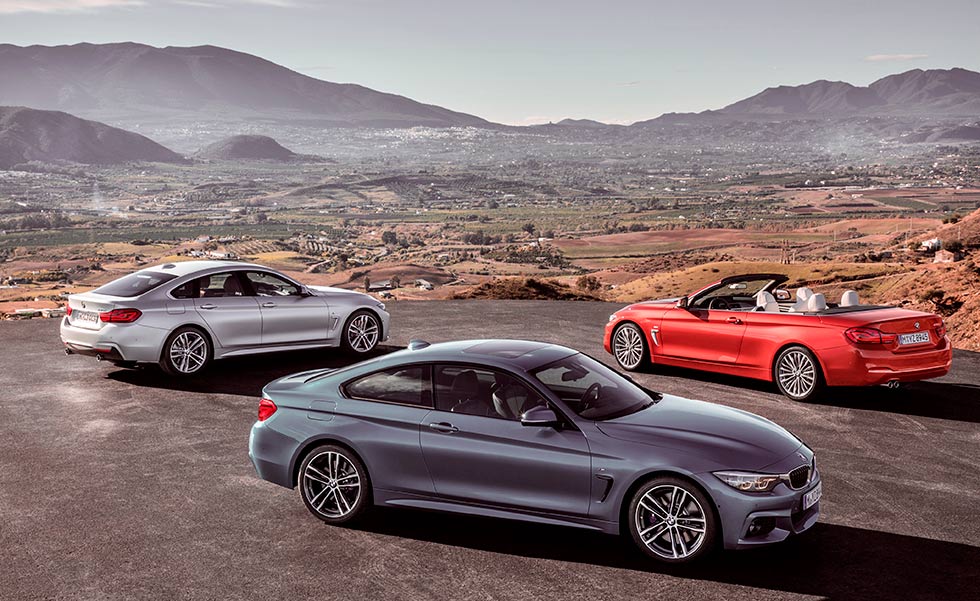 BMW 4-Series face-lift announced. Since its debut in June 2013 when the 4 Series took over the mantle from the 3 Series Coupé BMW has sold an impressive 400,000 examples of the Coupé, Convertible and Gran Coupé with the USA being the model’s largest market, accounting for almost a third of all sales. Surprisingly the UK is ahead of Germany in terms of sales figures and is the 4 Series’ second largest market and it’s also perhaps something of a surprise to note that worldwide the 4 Series Gran Coupé accounts for 50 percent of all sales with the Coupé and Convertible both garnering 25 percent.

Having now been on sale for three-and-a-half years it’s naturally time for the car’s ‘Life-cycle impulse’ or face-lift and in line with BMW’s current LCI policy the exterior changes to the cars are relatively minimal. After all, there’s no point alienating those owners who have recently joined the 4 Series club by launching an extensively facelifted machine. Thus there have been changes to the front lower bumper, the rear apron and to the front and rear lights, but other than that it’s been a case of tweaking the spec, adding some interior embellishments and introducing some new colours, too.

The Defining feature of the front end of the Four has always been the broad lower bumper air intake that stretches from one side of the car to the other becoming wider at the car’s extremities, and this is retained and accentuated on the face-lifted car. Having said that, it only really applies to SE and Sport spec cars as the M Sport cars have a more aggressive M aerokit as before.

All 4 Series models are now equipped with new twin LED headlights as standard. The headlights are composed of a familiar silhouette with flat-bottomed headlight tubes encircled by daytime running light rings, along with a dynamic cropped look, produced by the characteristic ‘eyebrow’ design. LED front fog lamps also now form part of the standard specification. As an option all Fours can now be spec’d with new Icon Adaptive LED headlights.

The rear of the BMW 4 Series has a low, sporty look that follows the lead of the front-end styling, with the bold horizontal lines, a redesigned rear apron and LED rear light clusters that ape the design of those fitted to the face-lifted 3 Series models. Inside there have been no major changes to the dash architecture – let’s face it none were needed as the 4 Series already has a superb cabin – but there has been a little bit of tweaking here and there. Surrounds for the air vents and door-mounted control panels now have electroplated inserts while the air con and audio controls are now bordered by chrome and the centre console has a high-gloss black cover panel. To top things off there’s new double stitching for the dashboard over the instrument panel and a new steering wheel rim that BMW says affords the driver an even better grip.

As well as the expected minor hardware updates BMW has added to the connectivity of the 4 Series and there have been changes to the navigation displays and controls and telephone connectivity. Professional navigation will be standard on all M Sport models and this now utilises the user interface as found in the 5 and 7 Series featuring six tile-style icons over two screen pages. Drivers can arrange the tiles as they please, allowing them to move the menus they use most to the main screen. These control pads provide direct access to the relevant functions, as well as a live display of the linked content. The pad for the entertainment function, for example, shows the song that’s currently playing, with album artwork, while the route the vehicle is currently taking appears on the navigation pad.

As an option compatible smartphones can now be recharged via an inductive tray, negating the need for charging cables. This tray also establishes a wireless connection between the smartphone and the car’s external aerial for improved telephone reception – particularly in areas with a weak signal. This option also includes a Wi-Fi hotspot – which provides highspeed in-car internet access for up to 10 mobile devices – plus two USB ports in the centre console. Additionally the Apple CarPlay smartphone interface is available as an option, allowing optimum integration of an Apple iPhone in the 4 Series.

As well as tweaking the interior and exterior of the 4 Series BMW hasn’t forgotten about the car’s underpinnings and says that its engineers have enhanced the cars’ dynamic handling capabilities by revising the 4 Series’ suspension, but without compromising on the cars’ impressive ride comfort. The new 4 Series Coupé and Gran Coupé both now come with stiffer suspension, featuring more advanced damping technology and an upgraded steering set-up. BMW says these measures have resulted in a tangible improvement in both lateral and longitudinal handling properties, regardless of the load on board. The upshot is reduced roll, more neutral responses when driving at the limit, even greater straight-line stability and the wonderfully precise steering for which BMW is renowned. This applies to the standard suspension, as well as the M Sport suspension and Adaptive suspension.

As is generally the case with a face-lifted model some new hues have been added to the colour palette and for the 4 Series this sees the introduction of Snapper Rocks Blue – a new shade of turquoise – and Sunset Orange. Inside there are three new leather colours to choose from – Night Blue Dakota, Cognac Dakota and Ivory White Dakota – and these come with contrast stitching and piping. New choices for the interior trim, meanwhile, include Aluminium Carbon with Pearl Chrome highlight and Black High- Gloss with Pearl Chrome highlight.

At the same time BMW has tweaked the model line-up for the UK market and the Luxury trim line has now been dropped with UK models comprising SE, Sport and M Sport. For the Coupé and Convertible the 20i and 20d models will come as standard as Sport models and these machines can also be spec’d as M Sports, too. For the 30i, 30d, 35d and 40i models (both rear-wheel drive and xDrive) these will only be offered in M Sport trim. For the Gran Coupé the 20d starts as an SE, the 20i will be a Sport model as standard while the largerengined models will once again come as standard in M Sport trim. Lastly for the 4 Series changes are a set of new alloy wheels with four new designs to choose from in 18- and 19-inch fitments.

So far we’ve not breathed a word about the M4, but the range-topping 4 Series has also come in for a couple of discreet changes. As with the rest of the 4 Series range BMW is obviously keen not to upset existing owners so once again exterior upgrades have been limited to the front and rear LED lights, and incidentally the M3 Saloon will also receive the headlight upgrade from March this year, too.

Inside both the M4 Coupé and Convertible feature new-look, illuminated M4 emblems on the front seats, while chrome and electroplated detailing, along with double stitching on the instrument panel have also been adopted as have the Professional navigation, enhanced Bluetooth and Wi-Fi hotspot features as per the rest of the 4 Series range. Those speccing the Competition Package will now be able to order 20-inch forged Star-spoke 666 M style alloys in black, too.

For the first time BMW M Performance Accessories are now optionally available for the M4 Coupé and Convertible, as well as the M3 Saloon, and customers can choose from four individual packages. The Exterior Carbon package, priced at £3000 for the M3 Saloon and M4 Coupé, comprises carbon styling components such as front and lower trims, rear diffuser and spoiler, all formed with unique carbon fibre for a true motorsports appearance. The Exterior Carbon package is also available for the M4 Convertible (£2500) with the front and lower trims, as well as the rear diffuser.

Customers can also specify the Carbon Mirror package (£400) or the Black Exterior Package (£500, standard models only) which adds black kidney grilles, side bars and exhaust tips. The interior can also be upgraded with a Carbon Interior pack (£850), featuring an Alcantara steering wheel with carbon fibre inlays, plus a gear surround and selector that feature the same carbon fibre finish.

The new 4 Series range can be ordered now with prices starting at £32,525 for a 420i Coupé and rising to £64,110 for an M4 Convertible with Competition Package.