Porsche joins the tech race with the second-generation version of its supersaloon. By Stuart Gallagher.

If you’re a long-time Porsche advocate, you’ll know the brand hasn’t always been the quickest when it comes to embracing new technologies, in particular those that have less to do with the thrill of driving and more to do with convenience. however, in the new Panamera, Porsche has not only combined its latest dynamic technology (hot-v turbocharged engines, rear-wheel steering, Dynamic chassis control sport, an eight-speed PDK gearbox with shift times as quick as those of a 991 GT3), but it has also built a car that will almost drive itself.

Additionally, the aluminium body panels are hemmed to the car’s steel structure – a first in the automotive sector, Porsche believes. the car’s modular MSB platform will also provide the basic architecture within the VW Group for future Bentleys (Conti GT and flying spur) and Audis (A8), and will allow spin-offs such as a long-wheelbase Panamera saloon, the sport turismo estate, a coupe (the long-anticipated 928 replacement) and an SUV-coupe.

However, it’s inside the Panamera where Porsche has taken its biggest leap, effectively developing its first autonomous car. While legislation catches up with technology, though, it’s still one you’ll have to drive yourself. 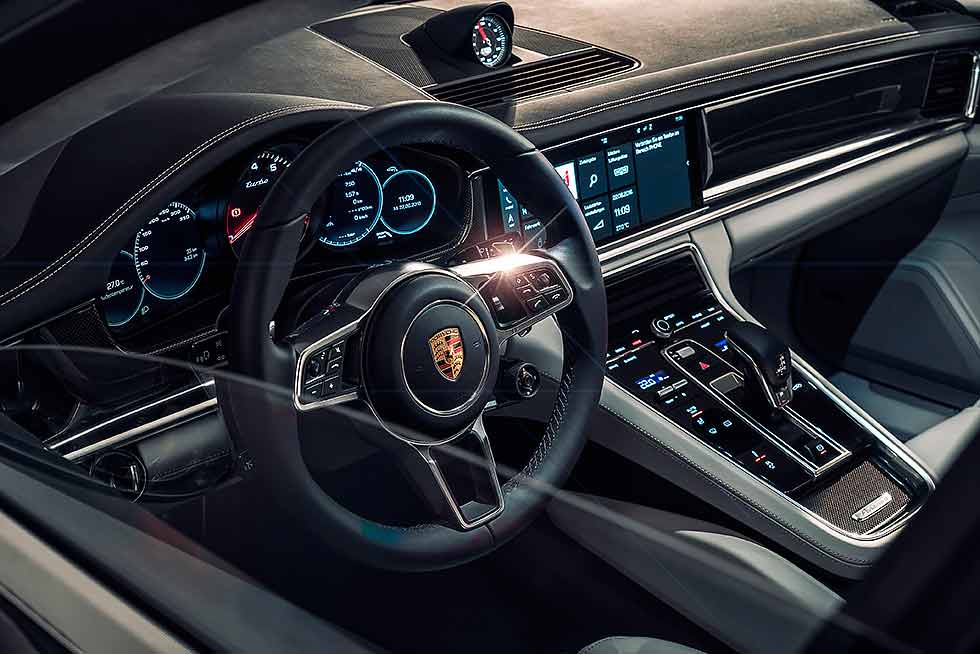 It’s called Porsche Advanced Cockpit, and while some elements are recognisable from, and inspired by the 918 Spyder, it is undeniably the big gest transformation a Porsche interior has undergone since the 997-series 911 arrived in 2004.

There are the usual enhancements you’d expect with any all-new model, such a s a lower, more focused driving position and newer, lighter seats, but it is the technolog y and the information it conveys that makes the new Panamera such a technologic al step up for Porsche. It may not be revolutionar y compared to what is already in use by certain rivals, but what it will allow Porsche to offer in the future is the thing that excites.

It’s the traditional Porsche five-dial layout, but not as we know it. The central tacho remains and is an analogue dial, but it’s flanked on either side by two digital screens. These displays show infotainment data and the speedometer, but all have multiple submenus for tech, such as the advanced cruisecontrol, G-meters and lap times. When it filters through to the next generation of Porsche sports cars, expect the driver to be able to dive into every conceivable piece of the car’s data, from tyre and brake temperatures to lateral loads.

Where have all the buttons that once lined the Panamera’s centre console gone? Right in here, on the 12.3-inch touch- and swipe-screen. It works like your smartphone and is now home to satnav, radio, phone, infotainment and climate-control functions – anything that has a setting can be configured in here, even the central air vent. While rivals have worked on a central rotary control for their screens, Porsche has gone straight for the smartphone approach, but we need to try it on the move to see how intuitive the system is to use.

Where once there were buttons on the centre console, there’s now a glass screen with minimalist touch-sensitive controls. Porsche was keen that all the controls for each of the car’s dynamic settings (PASM, PSM, PDCC, sports exhaust) retained tangible keys that did one job, with no switching between menus. The console ‘buttons’ require a bit of weight when you push them, and they vibrate to confirm when the setting has changed. The heater controllers are knurled aluminium items that wouldn’t look out of place in a Bentley.

A STEP TOWARDS AUTONOMY

Porsche InnoDrive is where the Panamera goes a bit autonomous. Using the camera that forms par t of the radar cruise- control, InnoDrive scans the route ahead (up to 1.9 miles at a time) that the satnav ha s plotted. From the data available, it sets the speed within the cruise control and selects the correct gear. It’s very similar to the system used by Rolls-Royce to select the right gear within the gearbox for the approaching corner.

By setting the speed and gear, and knowing the course that it is on, the Panamera could, in theory, drive itself, but until legislation allows such autonomous driving , you still need to steer. We look for ward to trying it on the Nürburgring…

Two all-new petrol engines have been developed for this Panamera – a 2.9 -litre twin-turbo V6 and a 4-litre twin-turbo V8. Both feature new hot-V turbo tech (where the turbos are positioned within the V of the cylinder heads, reducing heat losses to maximise exhaust gas velocity and therefore the effectiveness of the turbos) and are more powerful and efficient than before. The V8 also benefits from cylinder- on- demand technology, enabling it to drop a bank of cylinders under light loads.

Along side the petrol units, a 4-litre twin-turbo V8 diesel is borrowed from VW Group (Porsche’s new V8 petrol will also find its way to Crewe and Ingolstadt) and is the first time such an engine ha s been available in the Panamera.

All models are to be fitted with a new eight-speed, double- clutch PDK gearbox. Designed and developed in conjunction with ZF, it features twice a s many input shafts (four) a s before, features shift-by- wire, and frictional losses are down 28 per cent.

When the new Panamera launches in November, only four-wheel- drive power trains will be available at first.

84 Number of LEDs inside the matrix headlights

10 Number of pistons in the optional PCCB calipers

335kg Weight of the Panamera’s body-in-white