The current California T that was introduced in 2014 ushered in the modern forced induction era at Ferrari, gaining turbocharged power before even the sportscars did. Although the subdued soundtrack that results from the otherwise excellent turbocharger installation is disappointing, it’s an excellent car, vastly improved over the original 2008 California.

But when it comes to cars, even supercars, one man’s masterpiece is another man’s blank canvas. And increasingly, Maranello is happy to indulge customers’ requests for more power, more luxury and more exclusivity if it means extra money in its own coffers that might otherwise have ended up with the likes of aftermarket lily gilders Mansory.

The California Handling Speciale is the latest of these side projects. The California’s remit was always to bring new customers to the brand, and it has worked spectacularly. Ferrari’s entry-level coupe-cabrio is its best-selling single model ever and half of buyers have never owned a Ferrari before. The HS offers the next step for those customers who have dipped their toes into Ferrari waters, and now want something with a little more bite but maybe aren’t ready (or rich enough) to step up to a 488.

Despite the presence of ‘Speciale’ in the name, don’t make the mistake of trying to draw too many parallels with the incredible 458 Speciale of a few years back. In that instance the special stuff was everywhere and the resulting car featured more power, less weight, improved dynamics and revised aero work. The Handling Speciale pack on the California T is different. For a start it’s an £5568 option rather than a standalone model. And, as the name suggests, its scope is largely restricted to improving the way the California copes with curves.

Readers with long memories might recall the Handling Speciale package that was available on the previous naturally aspirated California. That featured stiffer springs and a faster steering rack, both working together to generate a real improvement in the dynamics. It was certainly more exciting to throw down a twisty road but the engineers were so keen to convince everyone it was a proper driver’s car, they ruined the ride and composure along the way, forgetting the whole GT ethos of the base car. Ferrari people admitted as much ahead of our drive in the new model. This one, they said, was a more rounded effort. The aim was still to push the handling angle, but without the compromises. 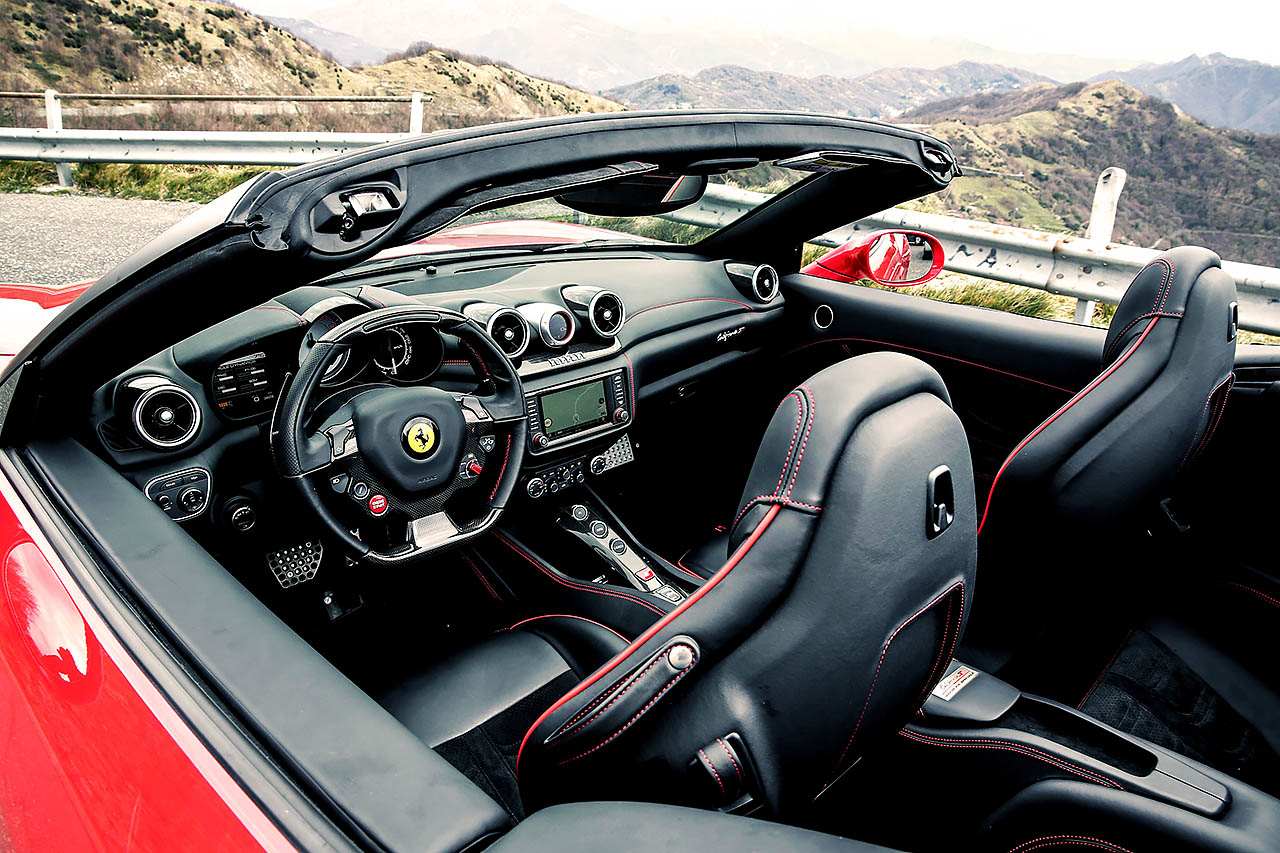 So what exactly do you get for your money, and is it worth it? Stripped back to its barest essentials, the HS pack is a set of new coil springs and a new exhaust silencer. Now if that sounds like abysmal value at £5.6k, the kind of money that buys an entire car, and a very nice one at that, from our classifieds, you need to get yourself into the mindset of the supercar buyer. Compared to the £1440 you can pay for a carbon fibre-trimmed cup holder, the £6000 golf bag and the £800 floor mats on the same option list, it doesn’t seem too bad. And besides, we’re being slightly disingenuous: although the hardware changes may be minimal, the man hours involved in honing the package and the changes they bring to the car’s character are pretty substantial.

Those springs are 16 per cent stiffer at the front and 19 per cent stiffer at the back, and mated to a recalibrated version of Ferrari’s magnetorheological damper at each corner. And it’s worth pointing out here that a hypothetical but probably non-existent option-free California actually comes with passive dampers. Merely adding the non-HS adaptive dampers, as most buyers will do, bumps the price up by £3168 anyway, meaning the cost of the HS kit is less than it first appears.

The first thing you notice about the HS though, isn’t the suspension at all. Push the big red starter button and the engine fires with a far more promising growl than the standard car can muster. Ferrari claims no performance benefits for the new exhaust box but says sound levels are up 3dB across the rev range under full load.

Winding our way up through the narrow streets of Camogli we can certainly hear the difference. Following Ferrari tradition which means sportscars are always launched at the Maranello factory and allow access to track time at Fiorano, but GT cars like the California are launched elsewhere to underline the philosophical difference, we’ve come to Italy’s stunning north western coastline to try the HS. The first part of the route, hugging the coast, is spectacular but slow. With the roof stowed and the sun shining it’s a pleasant reminder that you don’t have to be rocketing along at Mach 1 to enjoy a car – even a Ferrari. I’m streaming music from Spotify on my phone and controlling it through the Apple CarPlay interface on the navigation screen, and the 3.9-litre V8’s plentiful low-down pull means there’s rarely more than a couple of thousand revs on the dial. There’s some exhaust boom to deal with but the ride comfort is only slightly worse than the standard car’s. For a good many Californias, this is as demanding as life is going to get.

But while the journey thus far highlights how little compromise the HS pack requires, the road is asking nothing of the car that the standard California couldn’t answer and giving us little reason to recommend upgrading. Forty minutes in however, things get more interesting. The route changes tack, drawing us inland and away from the traffic for a long, twisty uphill climb. This is the sort of road that helps you rationalise the HS pack.

Because all Ferraris have pretty savagely quick steering these days, there was no need for the engineering team to fiddle with the rack this time. The 245-section front tyres are unchanged too, but the combination of those stiffer springs and tighter damping certainly sharpens the turn in and dials up the steering precision. It also helps contain the energy of a substantial, and unchanged, 1730kg kerb weight. At least that mass is spread evenly front to rear. The engine is mounted behind the front axle line and the transmission in front of the rear wheels, a tradition that goes back to Ferrari’s 275 GTB of 1964, although here a torque tube connects them for extra rigidity.

What that means is the California has a lovely neutral balance. Twist the wheel into a corner and you can feel the weight shift front to rear, not sliding exactly, but moving enough that you need to unwind a little lock as you hit the apex. On dry roads there’s no understeer to speak of and no danger of losing the rear end either. The manettino driving mode toggle features only Comfort, Sport and ESP off settings, compared to the five positions the 488 offers, and although Ferrari says it’s worked hard to put distance between the ESP thresholds of Comfort and Sport, neither will let you get into any real trouble. Even with the ESP off you have to be trying hard to make a mess of things.

And that’s because the traction is so good, and not because the engine is short on grunt. With 552bhp and 557lb ft on tap, no one could accuse it of that, but predictably the straight-line shove feels less bombastic than it does in the 661bhp 488 GTB. That’s not necessarily a bad thing. The mid-engined car is so fast you can actually struggle to find the space to wring the thing out, but that’s never a problem in the California, which at 3.6sec to 62mph isn’t exactly slow. That’s the same time Ferrari quotes for the standard car (and 0.6sec slower than the 488, for reference), but the HS benefits from quicker shift speeds, which gives a heightened impression of speed, even if the clock doesn’t concur.

The almost total lack of turbo lag remains deeply impressive, but there’s still something missing from this engine. That new exhaust system might have upped the quantity of noise, but it still hasn’t solved the quality issue. There’s no getting away from the fact that the bass-heavy soundtracks of Ferrari’s modern turbocharged engines simply don’t set your spine tingling the way the old naturally aspirated motors did. But that’s more a criticism of the California as a whole rather than a problem specific to the HS. Other disappointments include the lack of keyless entry – if you can have it on a £20k Fiat, surely it should be fitted to a £150k Ferrari – and styling that, although much preferable to the 2008 California’s, won’t ever trouble a list of most beautiful Ferraris.

But the California T remains an impressive machine in its own right, playing the roles of coupe and cabrio convincingly in turn, and offering a huge boot (when the roof’s up, at least) for those weekends away you’d want to engineer if you had regular access to a car like this. Even with the HS pack fitted it’s nowhere near as exciting as a 488 Spider, but it has more of the flavour of that car, a harder-edged demeanour, and still costs almost £50k less.

One in five of the old Californias was fitted with the previous HS kit, and we’d be surprised if this far more polished update didn’t make an even bigger impression on the sales charts. That’s not to say that every California buyer should automatically choose the HS package. There’s the unwelcome exhaust boom to contend with and although ride comfort is far less compromised than it was with the old HS pack, it still feels slightly less compliant than the standard car. If you’re fortunate enough to be buying one of these you need to be honest with yourself about how often you’ll really get to exploit the newfound dynamism.

With optimistic dreams of empty roads and never ending British summer days we’d be tempted to go for it. But for many buyers stepping into a Ferrari for the first time, the standard California is arguably still the better bet. 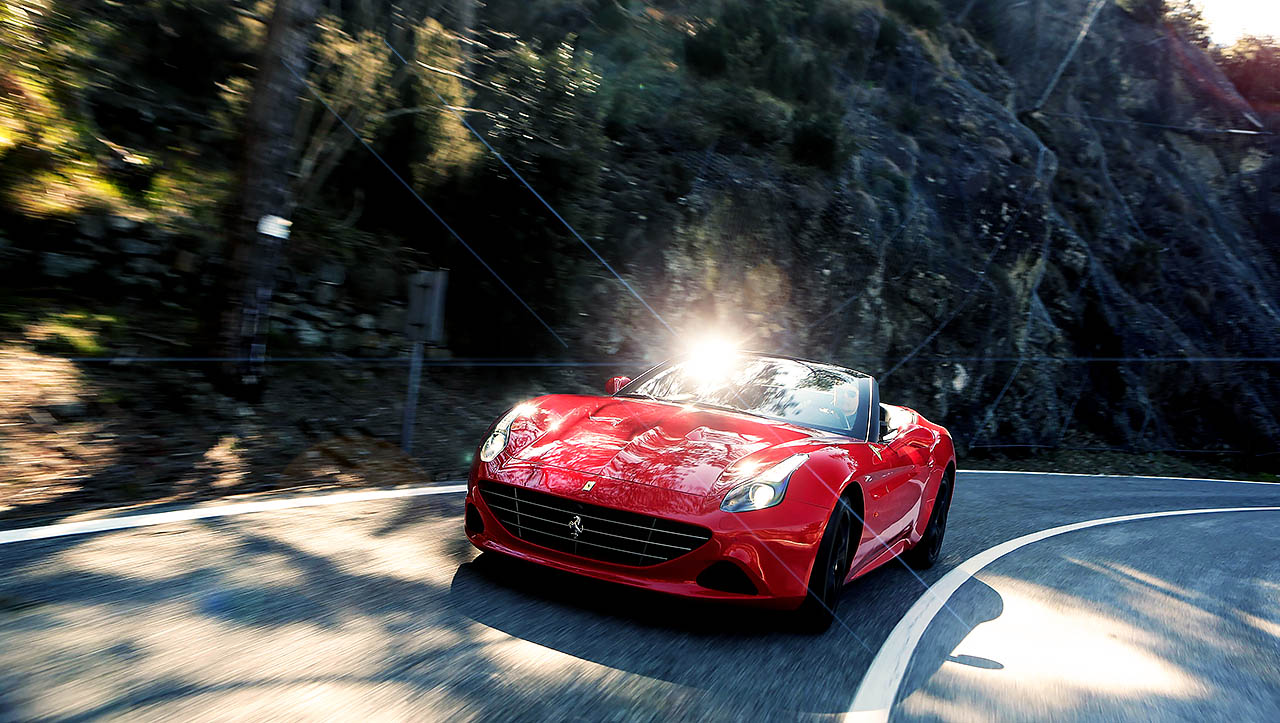 BELOW: Potential California owners now have the option of a more involving driving experience. ABOVE: The handling package includes recalibrated dampers and uprated springs.