We head Stateside to see how the new M6 race car fared in its debut race – the Rolex 24 at Daytona. Sixth SenseM6 at Daytona. It’s a numbers game for BMW as the 2016 race season kicks off: its 100th anniversary, new M6 GTLM and M6 GT3 race cars, and 24 hours of racing at Daytona to prove their worth Words: Simon Cooke. Photography: BMW.

2016 is the year when BMW Motorsport, combined with Rahal Letterman Lanigan Racing (RLL) – now in their eighth season of partnership – hope to go one better than 2015 when they claimed the runner-up slot in the GTLM class of the IMSA WeatherTech Sports Car Championship. They have a new car, the all-new M6 GTLM which replaces the Z4 GTLM. This new chapter in North American GT Racing includes events at 12 of the most iconic tracks across the USA and BMW customer team, Turner Motorsport, will also be fielding a pair of M6 GT3s in the GTD class. It won the driver and team titles in 2014 with a Z4, so is hoping for a repeat performance. 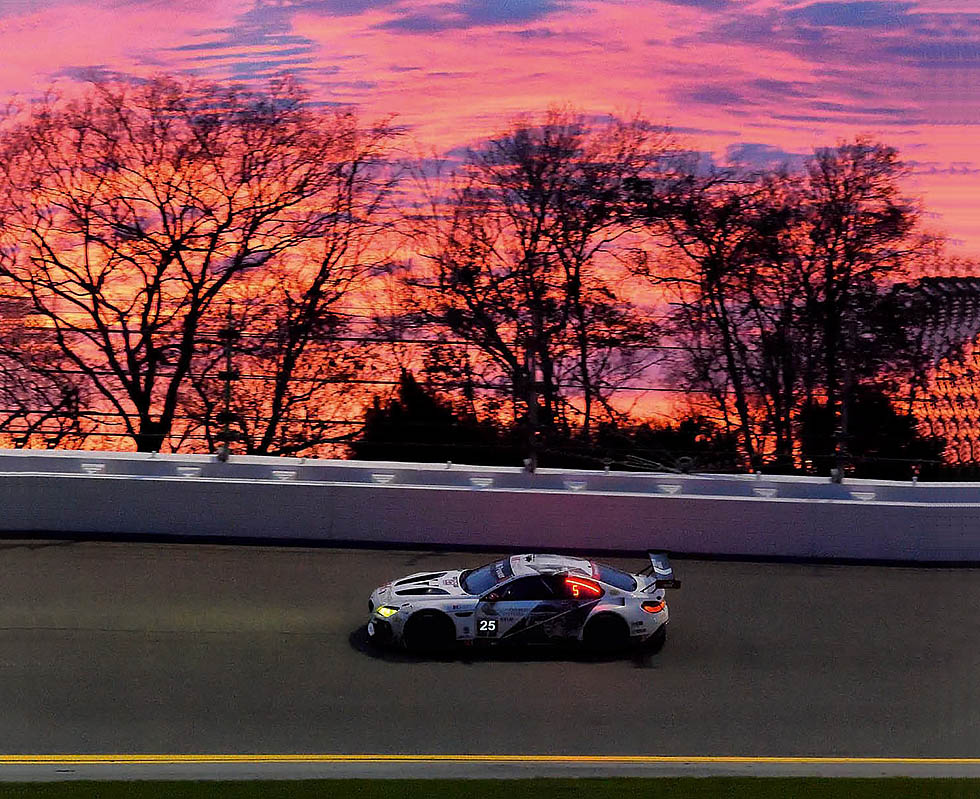 The M6 Coupé provided the basis for both new race cars, although there are some differences between the GTLM and the GTD cars to match the class regulations. For example, unlike the GT3, the GTLM is not permitted ABS. At 1250kg when empty, the BMW M6 GTLM is also about 50kg lighter and has a slightly longer wheelbase. The dimensions of the wheels and tyres are also different to those on the BMW M6 GT3, as is the fuel tank capacity. The M6 GTLM achieves far faster lap times than the GT3 version primarily because of the Michelin tyres specified in the regulations for the GTLM class.

The heart of the M6 GTLM and the GT3, its P63 4.4-litre V8 twin turbo engine, generates up to 585hp and has been transferred from the production car with only minor modifications. The cars are also fitted with a Motorsport six-speed sequential gearbox, while the aerodynamics of the Coupé have been fine-tuned in the BMW wind tunnel with a layer of reflective 3D vinyl on top to really catch the crowd’s attention during the night sessions.

The cars have completed more than 20,000 kilometres of testing. That included performance tests and endurance runs and they are already proving significantly more competitive than the Z4 GTLM and Z4 GT3 they are replacing. Naturally, driver safety is as important as performance and the cars contain full FIA-approved welded-in roll-cages and carbon fibre crash zones at the front and rear, with the driver’s seat located as low down and centred as possible, which also lowers the centre of gravity.

The two RLL cars were only revealed to the world a few days before the event and driver of car 100 (to celebrate BMW’s 100th birthday), John Edwards, was very upbeat, saying: “We’re finally switching from testing and development into race mode. It’s been great to see the improvements made during the development process with our new M6 GTLM and I’m confident that we’ll have good pace in 2016. We found a great car balance during the pre-Daytona test and I think we all feel ready to race. There are a lot of unanswered questions in the GTLM class this year, with the addition of Ford and a new aero kit for the Corvettes, but I know that if we can just survive the first 22 hours of the race, BMW will be fighting for the win on Sunday afternoon.”

The other car sports the number 25 in honor of the 3.0 CSL’s first season racing in the US in 1975. Team owner Bobby Rahal (yes, the same Rahal that has been multiple Champ Car World Series Champion in the past with race wins at the Indy 500 and 24-Hours of Daytona) was equally positive at the launch: “Even though it’s a new car, we go into this race feeling pretty confident. I think the M6 GTLM is a more sophisticated car than we’ve had in the past and there are challenges that come along with that but we have a lot of confidence in BMW, our drivers and our team and I think that our expectations of having a very good race are reasonable.”

But whatever you do in testing, it all comes down to the team’s performance on race day or even theday before, for qualifying. In fact, an M6 set the fastest GTLM time during the earlier three-day test at Daytona. Practice on the race weekend went very well for the team, with car number 25 setting the fastest time in the class battle during the final session, just ahead of its sister car.

It was wet for the official qualifying session and with various accidents on track it really came down to a two-lap sprint in the wet to establish the race grid. The M6 driven by Edwards/Lucas Luhr/Graham Rahal/Kuno Wittmer (number 100) ended up third, just one-second behind the pole-grabbing Porsche 911. The other M6 (number 25) – driven by Dirk Wener/Bill Auberlen/Augusto Farfus/Bruno Spengler – ended up in sixth position. The Turner Motorsport GT3 M6s qualified in 13th and 16th. Both team principal Rahal and top BMW qualifier Edwards were impressed how competitive the M6 was on the wet track conditions, reporting that it was much better than the Z4.

Then it was race time. After four hours M6 number 100 was running in fifth place, having picked up a drive-through penalty, while sister car 25 picked up a puncture on lap 66. Auberlen had to nurse the car back to the pits, dropping to eighth overall, one lap down on the leading cars.

Fast forward to halfway through the race and both GTLMs had enjoyed stints leading the pack with Farfus claiming the honour of being the first M6 GTLM driver to lead, on lap 271, before the car dropped to seventh with car number 100 taking its turn at the front of the field. By now all drivers had either had two or three stints behind the wheel.

At 3am – on lap 360 – the dream debut for the new M6 GTLM ended for number 100 (with Lucas Luhr behind the wheel), when it suffered a heavy crash in turn one, impacting the front and rear of the car. Luhr was unhurt but the damage from the suspected mechanical failure forced the team to retire the car from the race. “Something failed,” he later explained. “I don’t know what exactly. There was some kind of explosion at the front right that made the bonnet go up, so I couldn’t see where I was going. I had two or three good hits. My best guess is the right brake disc exploded. It’s a shame because we were running well and we were right there in the hunt. It is just a shame…”

However, as dawn broke over the Florida skyline car number 25 was still going strong in seventh position. It had run as high as third through the earlier part of the morning but had to have a second brake change on its last pit stop.

So when the chequered flag finally came down after 721 laps of the Daytona Circuit, where was car number 25? Well, Chevy’s Corvettes claimed the toptwo class positions while the number 25 BMW M6 recorded a solid fifth on its race debut. And in the GTD class (won by an Audi R8), one of the Turner Motorsport M6s ended the race sixth with its teammate dropping down the running order to cross the line in 17th after some technical problems.

Bobby Rahal summed up the weekend: “You never know how you truly add up until you get to the first race. The number 100 car was having a really good race, so it was a shame that we had a problem that you don’t see very often. Unfortunately it took us out of the race. I think the performance of the M6 was quite good and the guys were doing a great job. The same goes for the number 25. It is a new car and I think just finishing the race was kind of a victory in its own right. It is disappointing, naturally, not to have won, but that was asking a lot of this car on its maiden voyage. The Corvette is a well-proven car, the Porsche is the same thing, and I think we saw that today. Given that the M6 is a brand-new car, the fact that the number 25 car made all 24 hours without a lot of problems says a lot.”

And finally a word from Augusto Farfus, one of the drivers who took the M6 GTLM to its fifth place on its debut, and at one point led the class: “I was very excited coming to this race as I had seen what the new M6 could do. I felt it would be a fantastic race car for Daytona and that proved to be the case. I was also very happy to be the driver to bring the car across the finish line. To finish a 24-hour race in a brand-new car with no major technical problems is a great achievement in itself. Okay, we may lack top speed and this we need to pass other cars, but I know BMW will work on that as this is just the start of the project. I had some very intense stints and the one early in the morning was like a double qualifying when I was trying to hang in there with the Porsches and Corvettes.”

The series now moves on to a 12-hour race in Sebring where the team finished fourth and eighth last year before moving onto a short sprint on the Long Beach street circuit in April which RRL/BMW won in 2015.

The number 100 M6 GTLM sported a rather excellent layer of reflective 3D film to good effect during the night-time hours of the race.

Bobby Rahal is the mastermind of the BMW Team RLL in North America and was a hugely successful racer in his own right.

“Some kind of explosion made the bonnet go up, so I couldn’t see where I was going”