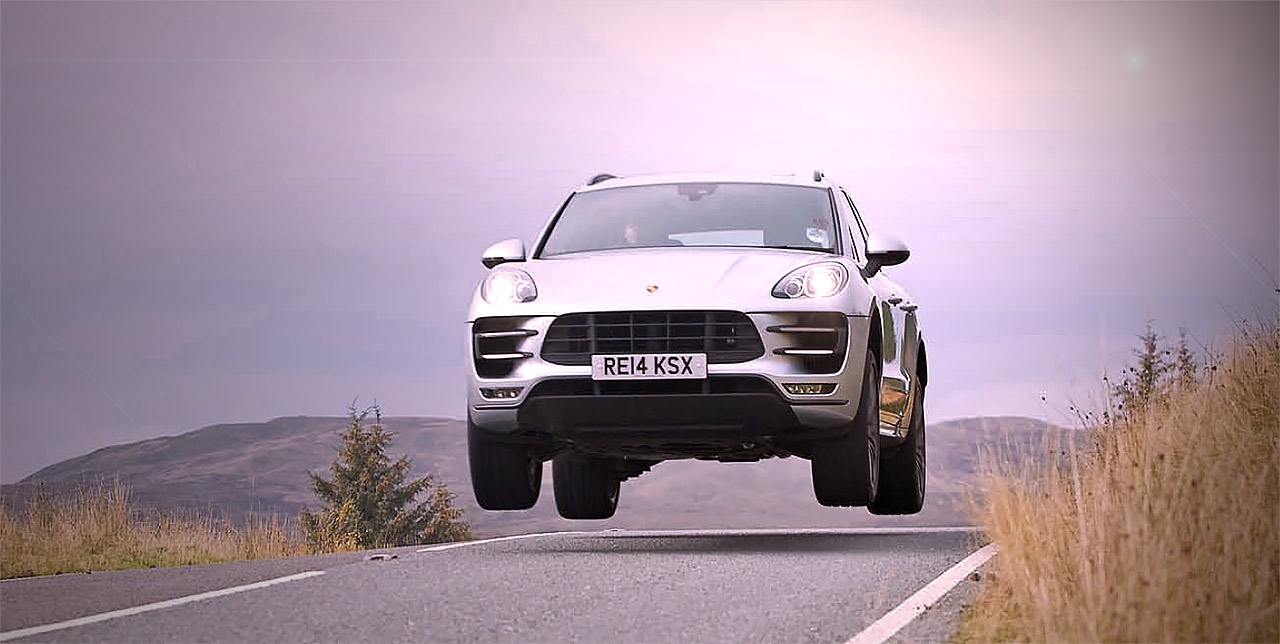 It wasn’t too long ago that I wrote a column in the pages of this magazine that painted the 2015 Porsche Macan as something approximating the devil incarnate. At the time I hadn’t driven it at all and had read all the fawning reviews just as, I’m sure, you had. ‘It’s like a socking great hot hatch’ they cheered, ‘it means the next GT3 RS will be better than ever’ came the rallying call. All of which may well have been true. But it seemed to the die-hard Porsche fan in me that it also marked the tipping point where Porsche was no longer a sports car company that built the Cayenne to make a few quid on the side, but an SUV manufacturer that went racing and built the 911 just to give its two-tonne off-roaders a bit of motorsport credence. Surely there are innovative, less crass ways to make a whole heap of money? Ways that actually chime with Porsche’s heritage rather then just plunder its riches?

Of course pragmatism, not purist, ideals makes the world go around and my Macan prejudices, predictably, haven’t been reflected in the market place. It’s selling like crazy – especially with the diesel engine (don’t get me started). So history will judge it as a success, as will the shareholders and dealers. But GTPorsche is still keen to see how it stacks up as a Porsche for people who love Porsche, on the kind of roads where Porsches shine brighter than anything else. And the good editor has asked me to investigate. So I find myself on the well-trodden test routes of north Wales with a Macan Turbo, a healthy dose of cynicism but a promise to put my prejudices aside as far as possible and discover just what this thing is all about.

Earlier on the long haul up the M6 the Macan was, of course, a pretty good place to while away the time. I have to say though, it might be a ‘baby’ SUV but it’s still a big bus. You sit lower than you do in a Cayenne or its less sporty rivals but it’s certainly not a car-like driving position, unless your frame of reference happens to be a Rolls Royce Phantom. That size and its girth seems to bunt performance, too. The Turbo’s 3.6- litre twin-turbocharged V6 develops 400hp at 6000rpm and 406lb ft from 1350-4500rpm but it’s pushing 1925kg and it shows. Oh, it’s plenty quick enough but compared to the force-of-nature Cayenne Turbo the junior Turbo feels just that.

In every other respect, though, the Macan is something close to extraordinary. It rides with that typical Porsche taut precision, it feels responsive to every steering input, the PDK ‘box is supremely fast and overall it feels so much lighter and more special than it really should. It is, by any measurement, a seriously impressive piece of work. That much is obvious even from the occasional roundabout and sweeping sliproad. But as the M6 gives way to the M54, the A55 and then crumples up on to the minor roads flung across Snowdonia, hopefully we’ll see if the Macan flatters to deceive or if it has a real sports car soul lurking under all that metalwork.

The temptation to discover what lies beneath is to ramp everything up to maximum – stick the dampers and drivetrain in Sport Plus, disable the PSM and just go for it. It works initially because there’s no doubt that as you rifle through the various modes a real sense of tension starts to run through the Macan. However, across the quite spectacular Denbigh moor road it’s almost too extreme. Front-end response is superb and it digs in really hard, hoiking up the inside rear wheel as it does so and requiring a recalibration of just how quickly a car of this shape and size can get across your favourite road. But the ride becomes very stiff and the rear axle seems to thump through each apex. I love the aggression and instantly understand all that ‘hot hatch’ guff – the time honoured three-wheeling stance scaled up is obvious – but there’s little in the way of subtlety or indeed, adjustability. It feels quite a brutal process. 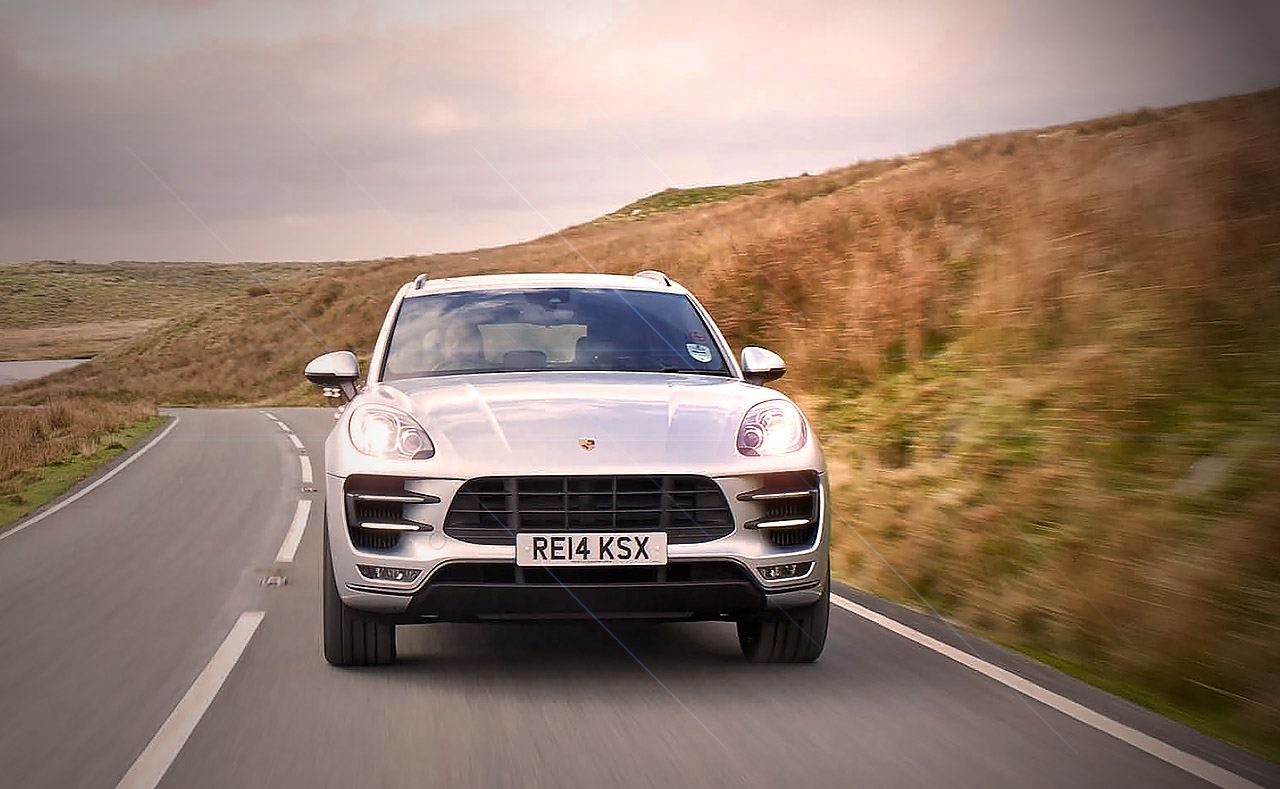 I’m keen not to harbour unrealistic expectations. The Macan is not a sports car, whatever the marketing puff. I’m not expecting a chassis intimately and minutely adjustable to the throttle nor craving some fantasy of an SUV that you can drive on the lockstops (amusing as that sounds), but I want to feel some genuine interaction, some sense that aside from grip and response it can also entertain. I almost hesitate to say it but there is a precedent for an enjoyable smaller performance SUV and it comes from the most unlikely of places: Audi. The more-juniorstill RS Q3 is actually – whisper it – rather good fun. That and the equally unlikely and twice as brilliant Golf R are large in my mind as I get to know the Macan Turbo. Not direct rivals, admittedly, but proof that all those real world concerns like practicality, comfort and versatility can go hand-in-hand with a four-wheel drive system that serves-up real fun.

With the dampers set to the more fluid middle ‘Sport’ setting the Audi is pretty quickly blown away. A fluency, slightly lacking before, emerges and very little of the precision or responsiveness goes missing. In fact the Macan pours across the moorland road with real poise. I’m not going to pretend it ever feels truly ‘light’ but it’s beautifully in control of its masses. There are plenty of SUVs that resist body roll with an iron will, but none that match the Macan’s ability to deal with whole sequences of corners and a knarly surface at the same time. Such composure means you can start to drive it with a degree of commitment that you’d barely believe possible. The front-end is superb, the steering is light on feel but well matched to the chassis’ rate of response and overall the Turbo breeds confidence and is genuinely entertaining.

If Porsche can make an Audi Q5 platform this good, just imagine what that near mythical sub-Boxster sports car could be like

At full flight and when extending the engine you start to appreciate the full 400hp, too. The engine is a long way from inspirational… but it makes a decent noise and despite the super-flat torque curve it’s rewarding to rev out. The PDK ‘box is great, too. In fact its speed seems all the more impressive in a car like this. Sometimes PDK in a Cayman or 911 (other than the GT3) can feel a bit like a good auto rather than a scalpel-sharp dual-clutcher, but here it’s intense and instantaneous. In fact, the way it slices between gears and keeps the turbos fully-lit is a large part of what makes the Macan feel genuinely ‘sporty’. Horrible word, but you get the picture.

Push deep into the Macan’s reserves of grip and, perhaps unsurprisingly, the illusion of keen agility starts to slowly fade away. In the dry the Macan’s doggedly neutral stance doesn’t slip gracefully into a phase of adjustability. You might find a little understeer, you might even stumble upon a suggestion of oversteer but it’ll be more by accident than design. Start to really bully it around and instead it tends to feel a mite clumsy as the stability control fights to keep you under control. Ultimately the on-limit balance is one of mild understeer, which given what sort of car it is makes complete sense. Strangely, in the wet you get to delve a bit deeper into the Macan’s box of tricks and its absolute composure actually gives way to quite a lot of oversteer. The difference between its balance in the dry and in the wet is very marked indeed. I’d go so far as to call it quite snappy, which isn’t what I’d expected at all.

It’s streaming wet by the time the photographs are in the bag, the stability control is left resolutely on and freed from any thought of really ‘testing’ the Macan Turbo, I can relax the pace and enjoy its easy performance and almost graceful poise. Driven quickly but well within the sky-high limits of its massive 21-inch Continentals, the Macan’s ‘Porscheness’, for want of a better word, feels pretty authentic. The key is the fluidity that I mentioned – the perfectly judged relationship between the steering, brakes, drivetrain and chassis response, the accuracy of the damping and the way it strides across the ground. How do they do that?

The answer of course, is that they do it by the same means that they make a Cayman so sweet, a GT3 so thrilling or a 911 Turbo so damn fast – by honing every last detail with more rigour and more skill than nearly everyone else. By obsessing about every facet of the Macan Turbo’s dynamic make-up. The result is deeply impressive, shockingly quick from point-to-point and a little depressing. If Porsche can make an Audi Q5 platform this good, just imagine what that near mythical sub-Boxster sports car could be like, or the Ferrari 458 rival we’ve been reading about forever, or a revived 928, or a… you get the picture. The Macan is big and it is clever, it’s a new benchmark in its class by a country mile. But a real Porsche when judged by a Porsche enthusiast? I’m still saying a respectful ‘no’.