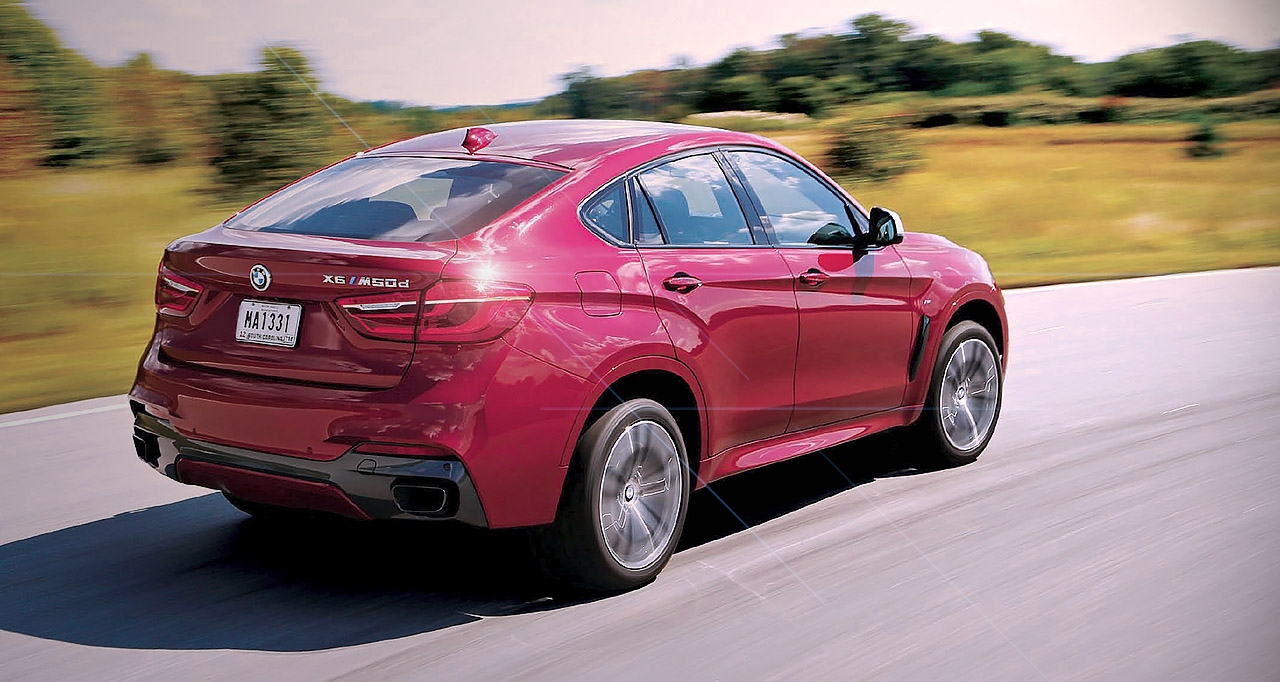 Love-Hate Relationship BMW F16 X6 M50d. On- and off-road in the new M50d version of the X6. We know we shouldn’t, but we like it.  Those that have driven it love the way the X6 performs but it seems that most folk in the UK hate the way it looks. Does this still ring true for the new F16 version? Words: Kyle Fortune. Photography: Drive-MY.

You lot, I’m told, don’t like the X6. BMW’s conceptually conflicted Sports Activity Coupé is not among the most coveted cars on these pages. I’ll not say you’re wrong, but BMW’s managed to shift over 260,000 of them (BMW X6 E71), so it’s toe-in-the-water nicheexploring experiment could be deemed successful. So much so the X6 has now sired a smaller relation in X4 guise, which might have many of you in a state of abject despair, but evidently it’s good for the bottom line. Which can only be a good thing for BMW.

In case the original X6 passed you by, or you’ve just been wilfully ignoring it in the hope it might go away it’s a four-door coupé based on the X5. I say four-doors, and coupé, it’s technically neither, but then when you’re comprehensively bursting market segments who cares about semantics. So it’s not a coupé, and it’s a five-door by virtue of having a hatchback. More money, less practicality and, ahem, more look-at-me looks, the X6 shouldn’t work. I count myself among those who have previously dismissed the X6 as a curious, pointless anomaly that might be quietly dropped, but those sales figures clearly tell a different story.

There are people who want, even like, the X6, then. People for whom the argument that an X5 does everything it does only with more space and practicality, and notably less brash looks, don’t care. For every five X5s on the road, there’s an X6 buyer out there, and for them BMW has introduced this new second-generation model. Deal with it. Like the 2008 original it’s as flawed in its concept as it possibly could be. An SUV (Sports Utility Vehicle) or SAV (Sport Activity Vehicle) in BMW parlance, that further confused by becoming a SAC (Sports Activity Coupé). Whatever BMW chooses to describe it, and many of you will have your own, perhaps derogatory names, there’s nothing else out there like it – except that X4 – though that’s all set to change with rivals set to challenge it soon.

BMW was here first though, and the X6 has unquestionably made an impact. The new one is certain to continue that, even if proportionally it’s a touch more resolved than its squat, arse-heavy predecessor. It counters with detailing that is even more fussy than ever. Those lines are discussed at the Spartanburg plant by X6 designer Tommy Forsgren. Given the nature of what he’s created, Forsgren is surprisingly meek when describing his creation. He started sketching this car back in 2010, saying its ‘pioneering’ nature created a serious design challenge. That’s not difficult to imagine, the brief is an unquestionably difficult one.

Around the front, Forsgren describes the larger more prominent kidney grille as “like a shark nose” – the overall aim to create a wider, more assertive stance on the road. Down the flanks his goal was greater surfacing and texture, something that’s unquestionably been achieved, though how successfully depends on your point of view. It’s busy, very, the rear-wheel arch treatment jarring a bit, though with the X6 that’s perhaps the point. The rear isn’t so high as its predecessor, the comical proportions of the original being altered for the better; the tapering of the roofline helping lengthen and, in designer-speak: “provide a greater speed”.

Visually that might be Forsgren’s job but physically it’s the engineer’s concern. It’s been achieved here by adding the M Performance tweaked tripleturbocharged 3.0-litre in-line diesel engine. Carsten Pries, leader in product management at BMW M, outlines the numbers: 381hp between 4000- 4400rpm and 545lb ft between 2000-3000rpm. That’s enough to get the X6 M50d to 62mph in 5.2 seconds, all while improving the consumption to 42.8mpg on the official combined consumption cycle. That figure is as real as fairies and unicorns, though, expect around mid-20s if you’re silly, very early 30s if you’re a saint. The M Performance changes don’t stop at the powerplant, the chassis features specific M tuning to the dampers and springs – air on the back – and revisions to the steering system. There are several different suspension choices on the standard X6, encompassing Dynamic Adaptive suspension, Comfort Adaptive suspension, Adaptive M suspension and Professional Adaptive suspension.

The M50d comes with that Adaptive M package, it’s also standard on M Sport models, the Dynamic Drive active roll stabilisation giving the X6 agility that defies its sizeable bulk. Indeed, the best place to be is behind the X6’s wheel. Not least as inside the cabin is less divisive in its style than the outside, the usual high standard of fit and finish, impeccable material quality and ease of operation as obvious here as they are elsewhere in BMW’s range. It’s inevitably more snug inside thanks to that roofline, getting in requiring the odd combination of a climb and a duck to ensure heads don’t meet roof. It’s tight in the back too, the now three-seat (marginal in the middle) compromised thanks to both the roofline, the inward position of the outer seats and limited foot room under the front seats. The boot is smaller too, but then it would be, and no the typical X6 buyer couldn’t care one bit.

The X6’s compromises are incidental, a by-product of its sub-set gene-pool, an evolutionary branch that shouldn’t work, but does. Its focus is different, and here, in M50d guise at least it’s on the driver. Tip the X6 M50d into a bend and the way it copes is nothing short of extraordinary. That roll mitigation system keeps everything flat, the X6’s nose turning with alarming enthusiasm for something so weighty, it doggedly resisting understeer on dry roads.

A wet circle test on track describes the nose pushing wide if you’re silly with entry speed. Keeping the accelerator pinned and allowing the xDrive system, allied here with torque vectoring, sees the power diverted to the wheels that can use it most and tightens the X6’s line. Hilariously it’ll drift if you’re brutal with it, which might not be relevant when cruising the Kings Road or other notable post codes, but demonstrates despite the X6’s oft-questioned purpose, that it’s backed with some serious engineering and a staggeringly well-sorted chassis. America’s roads might not be renowned for being particularly challenging, but it really is a myth. The route out of Spartanburg takes the X6 into mountainous national parkland, and the sort of topography-hugging, switchback hairpinned, undulating Tarmac that’s a serious test of any car.

Over-zealous corner speed limits are ignored, the X6 carrying multiples of the posted limits without the merest hint of difficulty. The steering, pinsharp in its response might be lacking in any real feel, but there’s supreme accuracy. The ride, too, is impressive, regardless of what setting you have picked, the chassis people having managed to allow the X6 to control all that mass and roll yet deliver a ride comfort that is also supple and composed.

That’s even true on the firmer, Sport and Sport+ settings, the two choices at the more extreme end of the Driving Experience Control spectrum. Pressing these ups the reaction of the powertrain also, and in the case of Sport+, releases the electronic stability safety net, Sport being configurable to allow the tauter damping but with the more Comfort-orientated response from the engine.

And what an engine. There’s the slightest delay in translation from foot to motion, but once the 3.0-litre tri-turbo is going its force is on the other-worldly scale. It’s aided by the eight-speed automatic transmission’s ability to always have the correct ratio, the spread allowing the X6 its always-accelerative ability. There’s little need then to shift gears yourself via the paddles, though doing so allows you to rev it out, the six-cylinder unit producing a pleasingly off-beat soundtrack when you do so. Combine that always-ready powertrain with the X6 M50d’s remarkable dynamic ability and the X6 carries speed with an ease that’s in the realms of unbelievable.

That incredible, effortless pace and dynamism doesn’t come at the expense of its lower speed comfort and smoothness though. Take it easier on motorways and the X6 is a supremely hushed machine, the 3.0-litre unit near-silent in its operation. Thank the torque for that, which sits easily at 80mph without reaching its point where its peak torque is delivered. Indeed, on the motorway, the only sound is the slight rush of wind and occasional tyre slap on particularly nasty expansion joints. Whether those wide tyres will be able to provide the same hushed refinement on less smooth British Tarmac remains to be seen, but regardless, the X6 is a car that’ll while away hours easily, before engaging when the route gets more interesting.

It’s a hard car to love, but it’s impossible not to admire it having driven it hard both on road, track, and even off-road – where it’ll wade, clamber and crawl like a 4×4 should. Not that it ever will, but it’s nice to know it can. The X6, whatever you think about it, is a hugely capable, technically impressive and hugely entertaining car to drive, so that should be enough to justify its existence. You can hate it all you like, but the X6 has proved to be a success, and one that BMW can be justifiably proud of.

Far left: Interior is excellent, although head room lacking in the back. Above: Engine is a masterpiece. Below: X6 has plenty of off-road ability.