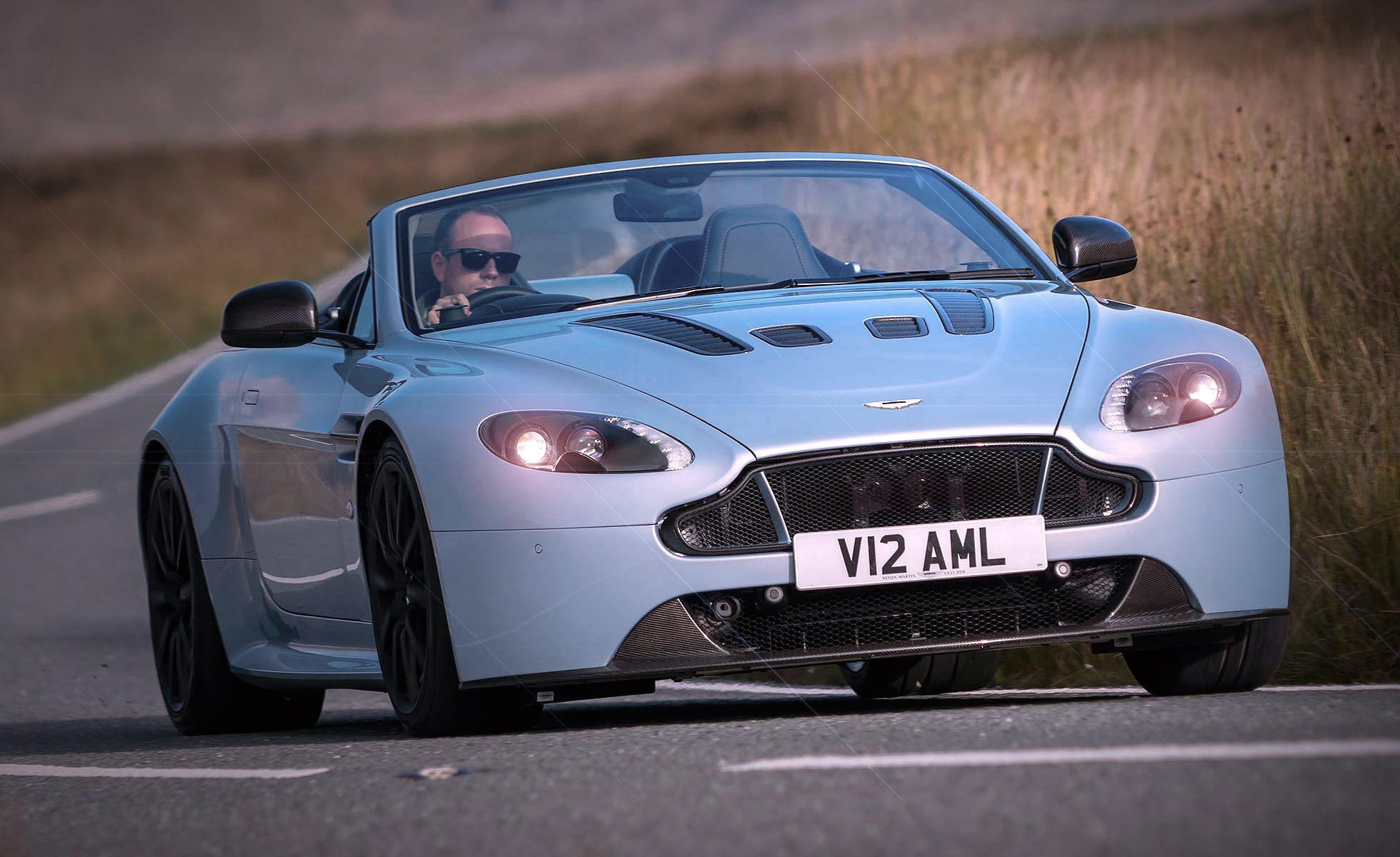 Drive Vantage roadster – blow away. Words Richard Meaden. Photography Aston Parrott. Winter – 2014 Vantage. The V12 Vantage s roadster isn’t just the fastest convertible Aston ever. Its one of the greatest Astons of all.

When it comes to great automotive rituals, sliding an Aston Martin’s smooth lozenge-shaped key’ into the dashboard and holding until the 5.9-litre V12 bursts into life is about as good as it gets. Never more so than when you’re sitting in the driver’s seat of the new Aston Martin V12 Vantage S Roadster. 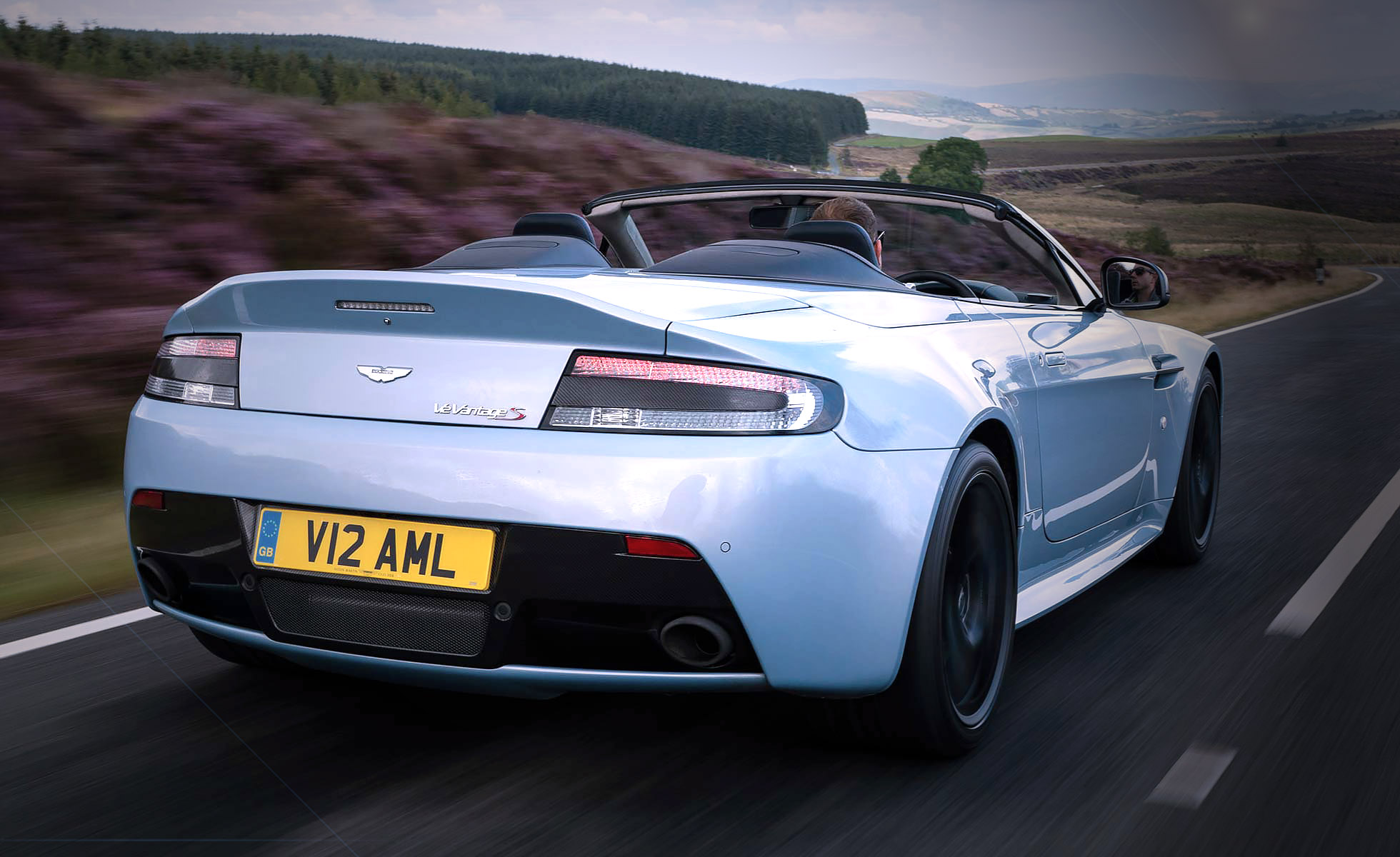 As its name suggests, this is the soft-topped spin-off from the decidedly hardcore V12 Vantage S coupe. Powered by the same 565bhp 5.9-litre V12, it’s a genuine 200mph machine (Aston Martin’s official claim is 201), which makes it one of the fastest open-top cars money can buy and the fastest al fresco Aston ever. As with the coupe, it features the seven-speed Sportshift III transmission and the same multi- mode damping, driver aids and huge carbon- ceramic brake discs, while the carbonfibre splitter and hungry carbon-and-mesh radiator intake send a menacing message to the rear view mirrors of those in front. 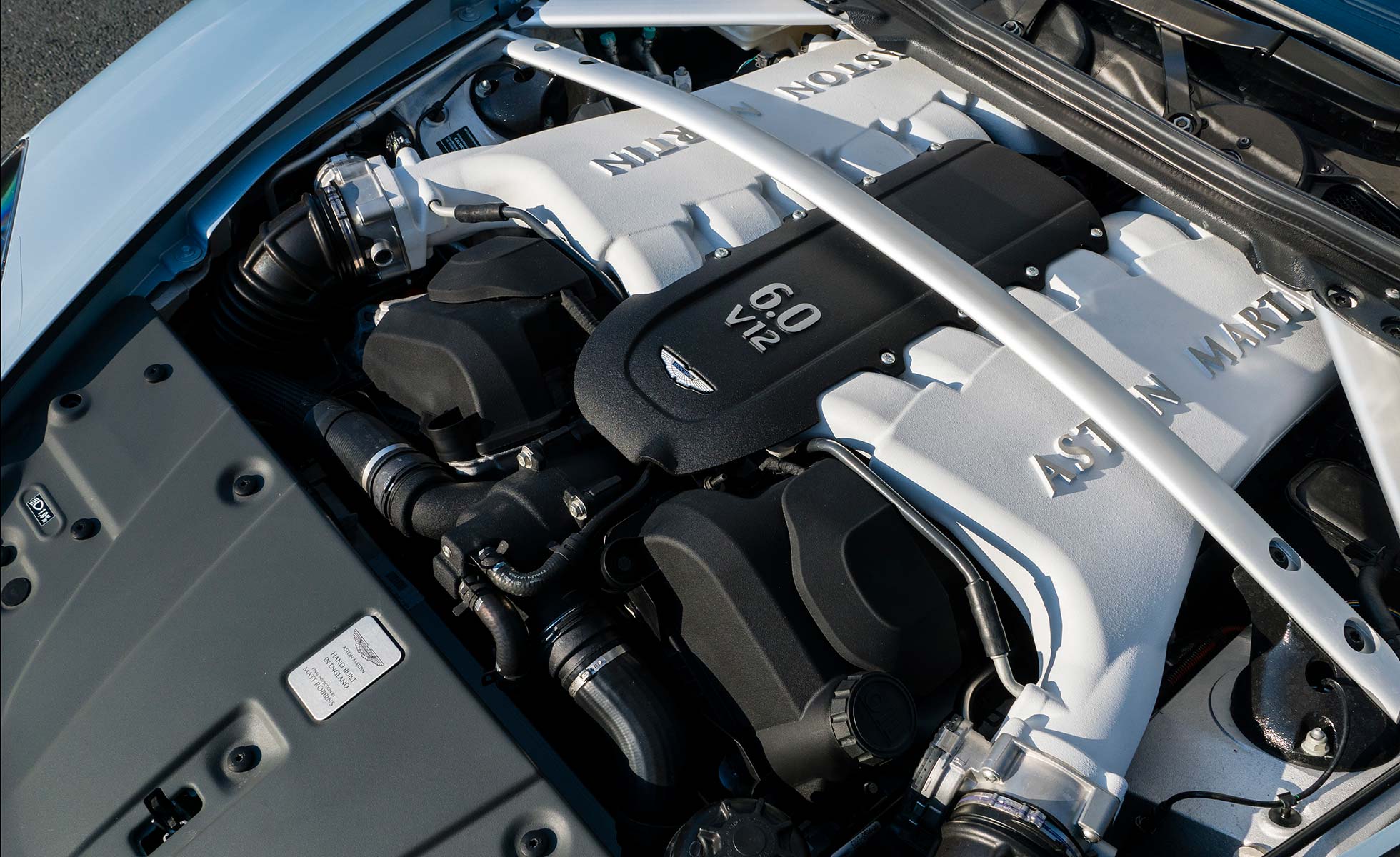 Overall, the V12VSR looks fabulous, despite its age and familiarity. Indeed, when fitted with the optional thin-spoke lightweight alloys, the Vantage Roadster has never looked better. The story is much the same inside, where firm bucket seats set an unmistakably sporting tone. The infotainment system is really beginning to show its age, but the B&O hi-fi sounds great. If you’re expecting Audi-style ergonomics, up-to-the- minute satnav and intuitive controls, you’ll be sorely disappointed. It’s the downside to the Vantage’s advancing years. But if you can cut it some slack it more than compensates in other, arguably more important areas (at least for a sports car), as I discover on a memorable day-trip to North Wales.

‘Few cars bring such a complete sense of pleasure or stimulate such a powerful desire to just get in, drop the roof and drive’

To provide a little context, the reason for heading to Snowdonia was an assignment for Vantage’s sister magazine, evo, in which I was given the onerous task of comparing a Ferrari Enzo with its successor, the extraordinary LaFerrari hybrid hypercar. That’s a good 500-mile round-trip from Meaden Towers, encompassing pretty much every kind of road, from confined country lanes to motorways and epic rollercoasters set against a majestic mountain backdrop. After a day like that, you might think the drive home in the Aston was something of an anti-climax, yet hand on heart nothing could be further from the truth.

What’s particularly special about this V12 S Roadster, and what has always been central to the V12 Vantage concept from the beginning, is the combination of small-car agility and barrel chested power. The magic of that potent cocktail is never more welcome than when you’ve spent a day threading two road-filling, ferociously valuable carbonfibre hypercars along roads lined with jagged stone walls. By contrast the V12VSR is a doddle to drive; narrow enough for there to be plenty of room to scribe smooth, languid lines through tricky tangles of tarmac, yet foursquare and sure-footed enough to impart a reassuring sense of poise and exploitability. To have so much performance on tap, and know you can readily deploy it where sense and visibility allow, is liberating and exhilarating in equal measure. 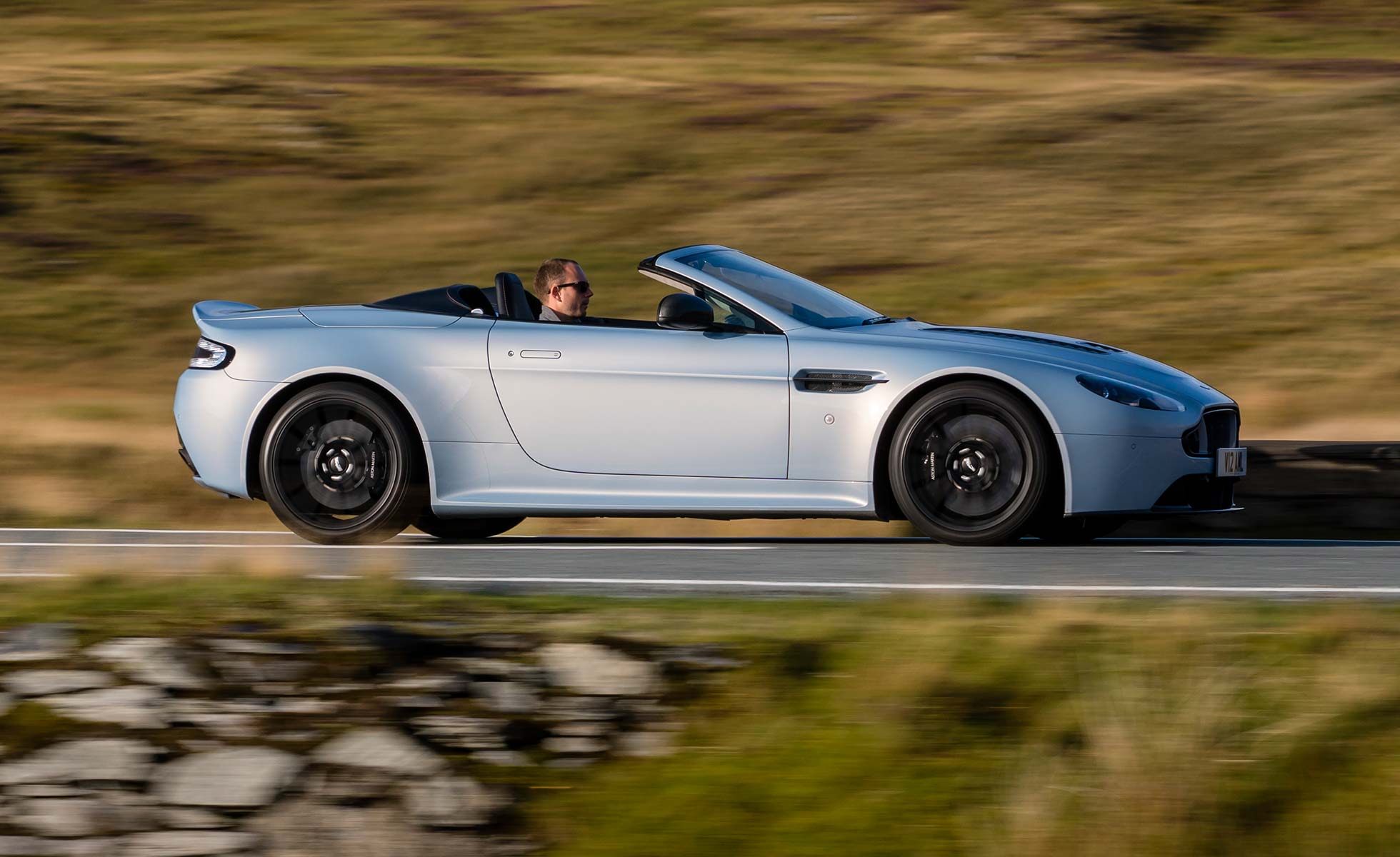 The engine is an absolute firebrand. Much sharper and more urgent than the earlier-spec unit in the original V12 Vantage and Vantage Roadster, it really does have formidable bite and a ferocious bark to match! The V12 S Roadster is some 80kg heavier than the coupe, but when driven in isolation you’d be hard-pressed to notice the difference. The closely stacked ratios of the seven-speed transmission always have you in the meat of the power and torque bands, so while there’s much to relish in whipping the tacho needle round to the limiter, such is the low-down and mid-range performance (376lb ft from just 1000rpm!) that wringing it out much beyond 5500rpm is an indulgence rather than a requirement. At whatever revs and seemingly in whatever gear, this car feels seriously quick.

Unfortunately the Sportshift transmission isn’t the best partner. Admittedly its shortcomings are more noticeable at lower speeds, when it stammers and feels generally slow-witted. At speed, with Sport mode engaged and your foot hard down, it comes to life, feeling acceptably sharp, if not exceptionally so. It’s not a deal-breaker, but it’s a shame that Aston seems to have a blind-spot when it comes to gearboxes, for the speed and manner in which a sports car changes gear are cornerstones of the driving experience. 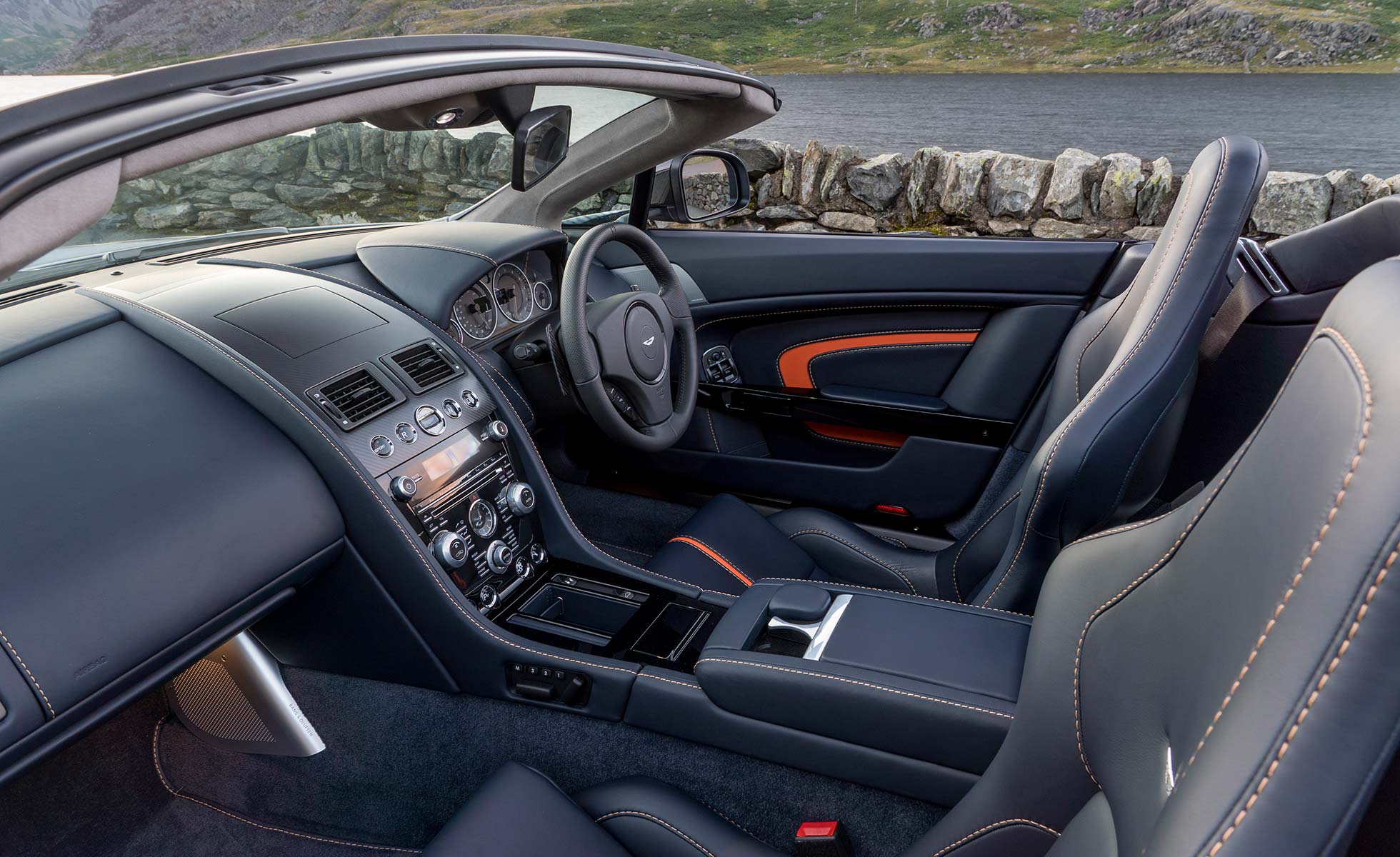 The chassis is much more convincing, thanks to the three-stage switchable dampers, which offer Normal, Sport and Track settings. The V12VSR is an inherently firm-riding machine. Around town, Normal is the most pliant at low speeds, but once free from the 30mph speed limits you’re most likely to select Sport, for it contains the V12VSR’s mass more tightly without hurting the ride too much. True to its word, Track mode is too combative for all but the smoothest sections of tarmac. The stability control system car be completely disabled, but in truth you’re unlikely to want – or need – to go any further than Track mode, which is more than relaxed enough to allow some sideslip and wheelspin. Certainly enough to require you to make corrective steering inputs – which is where the fun is, after all – but with the reassurance that there’s something to catch you should your talent desert you mid-corner.

The brakes are mighty, and mighty feelsome (unusually so for ceramics), the power steering sweetly weighted and beautifully judged for rate of response and sense of connection, the mechanical limited-slip differential consistent in its reactions, and the handling balance nicely neutral with smooth throttle inputs but more than willing to be led by the tail if you have the confidence to play it on the throttle. Modern electronics or not, this is a pure and simple driver’s car and all the better tor it. 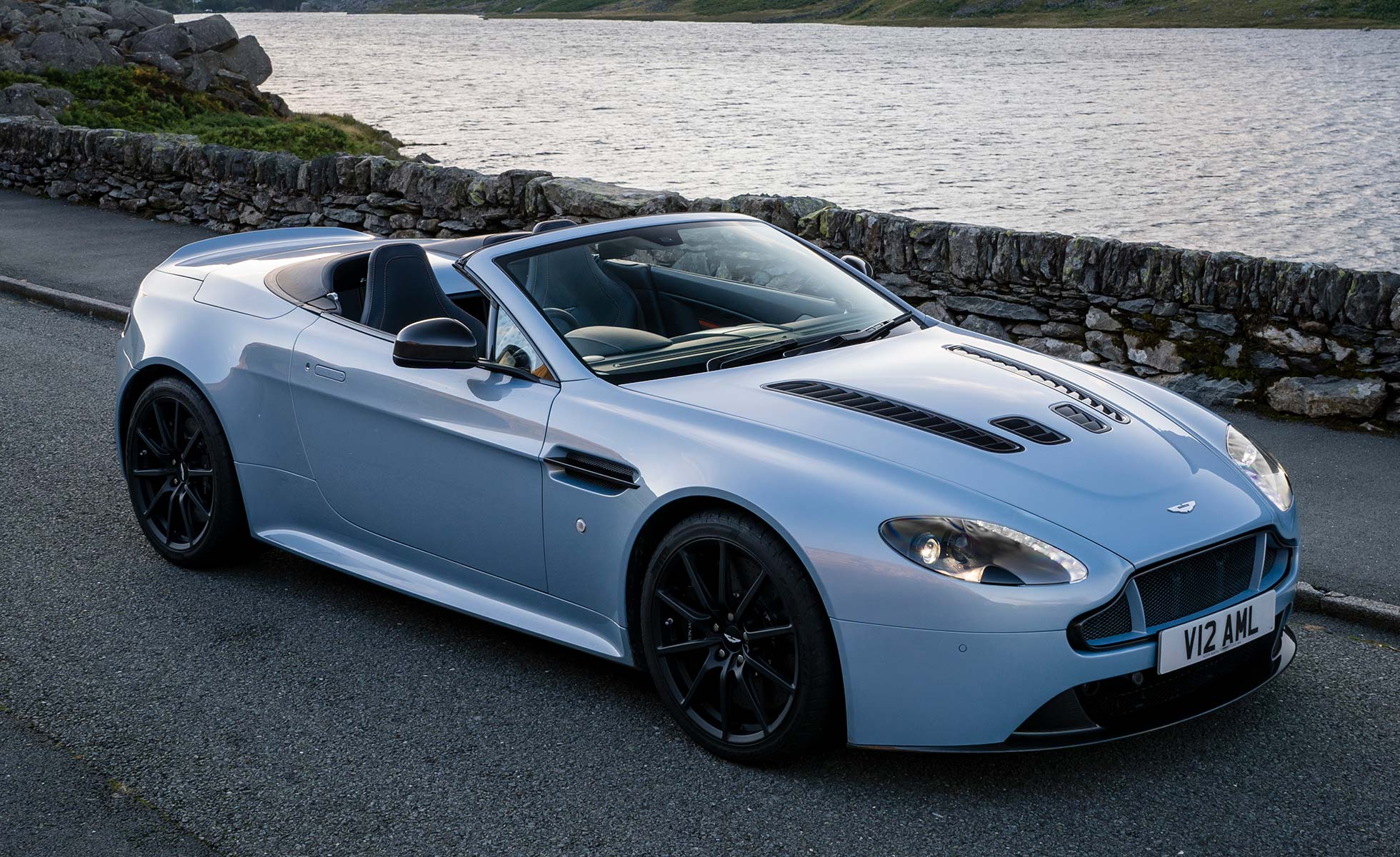 With an asking price of £147,000 the V12 Vantage S Roadster is a small car with a big ticket, but in the way it looks, feels and performs it’s worth every penny, especially when you consider that to go any quicker you’d need to spend half as much again to buy a Ferrari 458 Spider or McLaren 650S Spyder.

It’s not often the sight of a test car departing down my driveway leaves me feeling genuinely bereft, but when the V12 S Roadster was collected I felt sad for days. You don’t need to be a rabid fan of the marque to appreciate that all Astons have something special about them, but this car is The Real Deal. I landsome, charismatic, blisteringly quick and hugely capable, it excels at delivering the consummate sports car experience. The fact the soft-top adds so much, yet with such minuscule dynamic compromise over the coupe, is the icing on the cake.

Yes, you can pick holes in the infotainment system and gearshift. Both should be better. The uncompromisingly firm suspension set-up isn’t for everyone, but few new cars and certainly no other current Aston bring such a complete sense of pleasure or stimulate such a powerful desire to just get in, drop the roof and drive. Right now it’s the best car Aston Martin builds. To have one of these in your garage would be utter bliss.