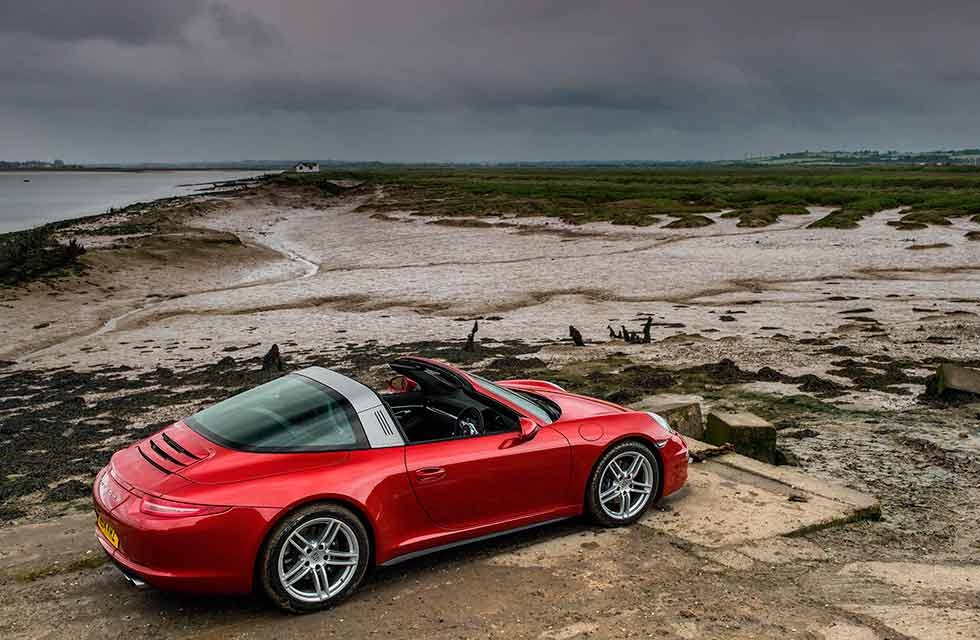 Special One Can the new 911 Targa really be the pick of the 991 line-up? A week and 1500 miles should answer that question for us. Story: Stuart Gallagher. Photography: Dean Smith.

991 Targa 4 Could the 2014 911 Targa really be as good as we first thought? A 1500-mile European jaunt should hopefully give us the answer to the question.

Fortunate as we are to smoke around in all manner of new and old Porsche metal, no matter the location of its engine or the chosen cooling method of said powerplant, the questions from friends, family members and passers-by are always along the same lines: How fast is it? How much power has it got? How much does it cost? Is it yours?

Depending on whether it has a rear wing the size of an aircraft hanger attached to its engine cover or an interior dripping in luxury trinkets determines which question gets asked first and most frequently. A GT3 RS will make people knock on your front door to ask if they can push their noses up against the window, whereas a Panamera Turbo S is great at making members of the public play the game of trying to look at your car without you catching them doing so. Stop anywhere in a 991 Targa and there’s only one thing on everyone’s mind: that roof. From a car park on an industrial estate in the South East of England to outside a bar in mid-west France, during one week and 1500 miles, the Targa’s new roof was as intriguing to the population of western Europe as Porsche type numbers are to you and I.

We’ve always had a soft-spot for Porsche’s water-cooled 911 Targas within this magazine. It was the first new model we reviewed in issue one back in 2001 and since then we’ve found plenty of opportunities to borrow one when a road trip beckons as there really is no 911 better at hauling photographers’ gear across Europe than Porsche’s 911 hatchback. But as a 911, both the 996 and 997 Targas (the former only available with rear-wheel drive, the latter only as a four-wheel drive model) were not the pinnacle of 911 dynamic excellence. More weight higher up in the car with a bodyshell closer to a Cabriolet’s in torsional stiffness than that of a Coupés, at seven or eighttenths the first two 911 Targas were less about dangling over the edge of the dynamic envelope but more about driving up to said edge and admiring the view with that great big glass roof panel opening up to a panoramic vista.

In hindsight, the 996/7 Targas were just 911 Coupés with big old sliding sunroofs (you can add the 993 Targa to that, too). The opening rear window was convenient but really the last three-generations of 911 Targas have been a bit ‘so what?’ when it comes to that intangible measurement called ‘specialness’. The design that made the first Targas (from the original 1965 car through to, and including, the last of the 964s in 1993) stand out from the crowd and bring some uniqueness to the road had been wiped out with a designer’s eraser and a desire to bring a uniformity to the 911 range.

Whoever it was who stood up in the product planning meeting and suggested that the 991 Targa should have an exposed stainless steel finished roll bar and a curvaceous and vast rear window deserves a hearty pack on the back.

In Coupé or Cabriolet form the 991 is hardly a piece of inspirational design, the demand for more interior space has eroded the idiosyncrasies of the model’s traditionally pinched-waist design. And while in the Targa the dimensions are identical to that of the Carrera 4 on which it is based, above the waistline the 991 now has visually alluring design details to give it a fighting chance of justifying its £86,281 asking price and restoring some of the appeal a few argue has been lost with the 991.

From the B-pillar forward it’s a 991 as we have known since 2012 but aft of that it’s unique. That roll bar is a work of genius, dissecting the car and making the 991 look smaller than it actually is. The large, frighteningly expensive-looking rear window replaces the square metres of rear bodywork that make the Coupé look a little on the large side. And the black retractable roof panel? You hardly notice it when it’s in its closed position, not enough to think it jars with the car’s design at least. The roof, though, is rarely in place. At every opportunity you’ll want the roof open, which can be as easily operated from the car’s key as the switch on the centre console. And it’s a process you’ll get used to doing for a couple of reasons. First, because everyone will ask how it works and it’s a process that’s far easier to demonstrate than to describe. Second, unless the rain is falling at such a rate that it’s threatening to fill the footwells, you’ll find yourself driving this car everywhere with the roof open. We completed a 1000-mile, early morning run to Le Mans and a through-the-night run back with the roof panel stored neatly behind the rear seats. A feat only possible because, unlike a Coupé with a sunroof or a full-on Cabriolet, Porsche has worked a minor miracle when it comes to roof-open wind noise and buffeting. It is all due to a piece of plastic that probably cost less than the coffee bill of the engineers who were working out how to fit the roof under the rear window.

Positioned on the leading edge of the windscreen is a plastic wind deflector that runs the full width of the header rail. At low speed, below 50mph, you need it in its default highest position but as your pace increases you’ll want to reach up and squeeze it until it locks in its down position for the best results. To be honest, there’s not a great deal of difference to the noise and wind flow at high speeds, however if you leave the deflector in its lowest setting at low speeds the reverberating winds noise is on a par with when you open a rear window in a saloon car on the motorway. As a 911 the Targa is a very appealing package. Our test car was fitted with the 350hp 3.4-litre motor connected to the optional seven-speed PDK, making it one of the least performance-orientated 991s Porsche produces. Snick the PDK lever into manual mode though, select Sport for a crisper throttle map (or in this example the optional Sport Plus mode for an even sharper throttle response and quicker gearshifts) and if you are prepared to work for your mph the Targa 4 will get a move on. The extra 110kg this 991 carries over a Carrera 4 Coupé does makes itself known across the performance spectrum. The acceleration never pushes you back in your seat, the mid-range can feel flat when you’re looking for a little more surge to make progress past slower traffic and at motorway cruising speeds it doesn’t take much of an incline to cause the PDK ‘box to drop a ratio, sometimes two, to maintain momentum. After a couple of hundred miles it becomes somewhat irksome and you begin to yearn for the bigger lung capacity of the 3.8- litre motor from the S model; however a Targa 4 with a third pedal and seven gears to select manually should be avoided, PDK suits it best despite the compromises.

Dynamically the Targa 4 is sure-footed, responsive and engages like a 911 should. A Coupé is a sharper steer and a quicker-reacting 911 and it engages you more when you dive into its performance, but the Targa is closer to its Coupé cousin than it is its Cabriolet sister when it comes to how you feel from behind the wheel.

In a Cabriolet you feel you are driving around a dynamic short coming, that is a chassis that carries extra bulk to mask the wobbliness that comes with chopping the roof off. And because of it you never really get to experience the full 911 sensations; the Cabriolet lets you enjoy more of the flat-six orchestra but the 911 has always been more than just its engine and once you’ve heard the boxer motor at full chat half a dozen times you soon yearn for a dynamically superior and more engaging 911. And this despite the 991 Cabriolet, the best 911 soft-top Porsche has produced.

With the Targa you get a mix of the Coupé and Cabriolet. Roof stowed away, sun fighting with the factor 20 on your face and a gentle breeze lapping at what follicles you are fortunate to have left up top you’ll want for little more. But what of the 991 Coupé? Is it bettered by the 911’s latest arrival? A 911 Coupé is still an incredibly special car. The 991 may require more effort from its driver to get the same rewards that its predecessor provided at a much lower threshold but it is still fundamentally one of the finest sports car to drive on this planet. In the Targa, although you sacrifice ultimate involvement you gain by knowing you are in a 911 that’s special; a Porsche that highlights the individuality that only a 911 can ever offer. It may read like the Targa is the perfect machine for posing rather than performance but to think that would be missing the point. What the Targa actually is, is a great 911 for losing yourself in on those journeys that only a 911 can make special. Of course a Coupé can do the same journey, at a quicker pace and make you feel more of a direct part of the process but in the new Targa that journey will feel a little more unique, more of an occasions, more special. Aside from a Carrera 50th Anniversary Edition, the new Targa should be a 911 you consider above any other Carrera model.

New Targa is a great long-distance cruising companion. The Coupé is a sharper drive but Targa is remarkably involving.