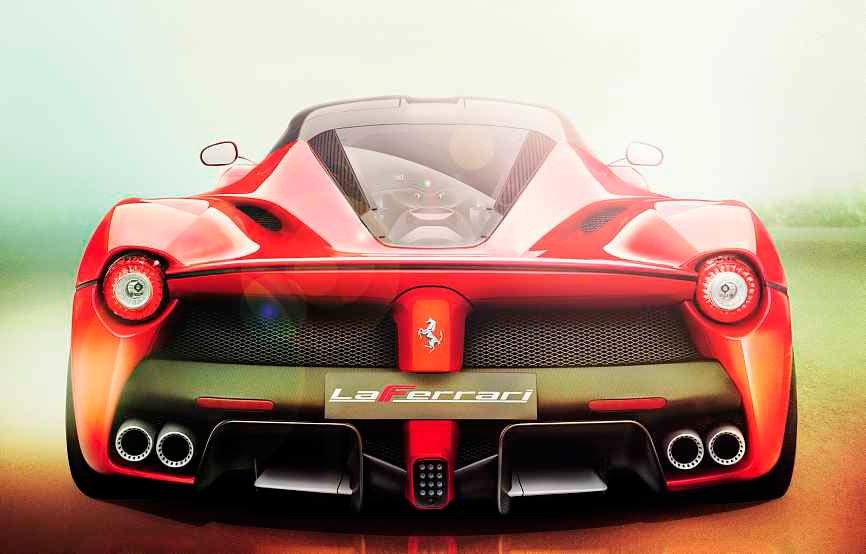 So it’S back to you, Ron Ferrari LaFerrari Maranello’s hypercar is deadly serious (apart from the name) Ferrari’s LaFerrari, latest in a long line of Maranello ultimates, was pipped to the launchpad by McLaren’s P1. And stats like these mean Ron Dennis’s Woking team has no option but to react… Words Glen Waddington.

If only they hadn’t called it LaFerrari. Ferrari’s president Luca Cordero di Montezemolo says the company did so because the car is ‘the maximum expression of what defines our company’. Fair point, but is it really going to ring down the ages with the impact and resonance of GTO or F40?

Because it should. This car follows in some of the most illustrious tyretracks ever. We won’t label the 250GTO as a real forebear because that car was racebred rather than race-derived, but remember the speculation that this car was going to be christened ‘F70’: five years too soon to celebrate the company’s 70th anniversary, but it’s a celebration nonetheless. An ultimate. Just as were the F40, the F50 and the Enzo that preceded it over the last quarter-century.

There’s one Ferrari we haven’t mentioned but, then, it didn’t really exist. Remember the Mille Chili concept that showed up at Ferrari’s Fiorano test track in 2007? It took the Enzo to the next step, highlighting how small and light yet powerful and fast the Enzo could have become if it employed all the technologies Ferrari was working on at the time. They were advances that had roots in Formula 1 racing, technologies such as a Kinetic Energy Recovery System (KERS) to power an electric motor, boosting total power using energy that otherwise would have gone to waste. There were active aerodynamics too, a twin-clutch transmission with a theoretical shift time of just 30 milliseconds, plus a fixed-seat driving position and Formula 1-style carbonfibre crash structure to save weight.

Fast-forward to today. Suddenly those features have been made real, as the LaFerrari (though I’m sure Ferrari would prefer we omit the pronoun) makes its debut at the Geneva motor show. Fernando Alonso and Felipe Massa were consulted during the design process, particularly in respect of the driving position, which is inspired by that of an F1 car and features a fixed seat with adjustable pedal-box and steering wheel. There’s a seven-speed dual-clutch transmission but it shifts five times as quickly as the Enzo’s (the F40 and F50 still had chrome open gates and manual wands).

Aerodynamics were honed in the Formula 1 team’s wind tunnel, and the surfaces feature front diffusers and a guide vane on the underbody, plus more diffusers and a spoiler at the rear, all active and deployed automatically. The structure employs four different types of carbonfibre and is hand-laid and auctoclave-cured in the Scuderia racing department. So it’s built like a Formula 1 car, too.

But while next season’s F1 cars switch to baby turbo V6s, Ferrari’s roadgoing hypercar features a 6262cc V12 – the same capacity as the F12 supercar’s – with a maximum power output of 800CV (or 789bhp). That’s 69bhp more than the F12 manages, for a specific output of 126bhp per litre. This is a normally aspirated engine, remember; equally impressive is its 13.5:1 compression ratio. And it features a record-breaking (for its displacement) rev limit of 9250rpm. Imagine the histrionics as Apple Macs around the world struggle under the strain of road testers trying to describe what that sounds like. I bet they mention the words ‘Formula’ and ‘One’.

Thing is, this time it’s not only petrol providing the power. And 789bhp isn’t the full corral. Total power is 950bhp, thanks to the added punch provided by Ferrari’s Formula 1-derived HY-KERS system. The engine is coupled to a 161bhp electric motor and, as electric motors produce their peak torque potential at rest, so Ferrari could capitalise on that and optimise the V12 to produce peak power at the top end.

The electric motor is powered by a battery whose cells are assembled by the same Scuderia Ferrari department that makes the F138 Formula 1 car’s KERS system. It weighs just 60kg (a Nissan Leaf’s battery pack weighs five times that), and is charged under braking by a regenerative process that uses rotors behind the wheels, and when more torque is produced by the V12 than the wheels need – like a regenerative traction control device. The electric motor is placed well within the wheelbase along with the gearbox to the benefit of weight distribution.

Talking of weight, it’s believed that the LaFerrari undercuts the 1395kg of the new McLaren P1 (surely its closest rival) on the scales by 140kg, and it’s also reckoned to be faster to 186mph (300km/h) by two seconds. And talking of performance, this is Ferrari’s fastest ever road car: a top speed greater than 350km/h (that’s 220mph, give or take), 0-100km/h (62mph) in less then three seconds, and it’ll be hitting twice that speed only four seconds later. Cue further histrionics at the Apple Macs.

Ferrari plans to build 499, at a cost of around £1m each. All that technology, power, speed, even the hint of a green conscience in the attempt (via KERS) to decrease carbon dioxide emissions: surely they could have come up with a name to linger on our lips into eternity? For the right reasons.

‘it’s a celebration. An ultimate. Just as were the F40, the F50 and the Enzo that preceded it’

1987 Ferrari F40 Ferrari’s 40th birthday present to itself, the first roadgoing Ferrari to top 200mph, and the last car personally signed off by Enzo himself. 478bhp, 1315 made.