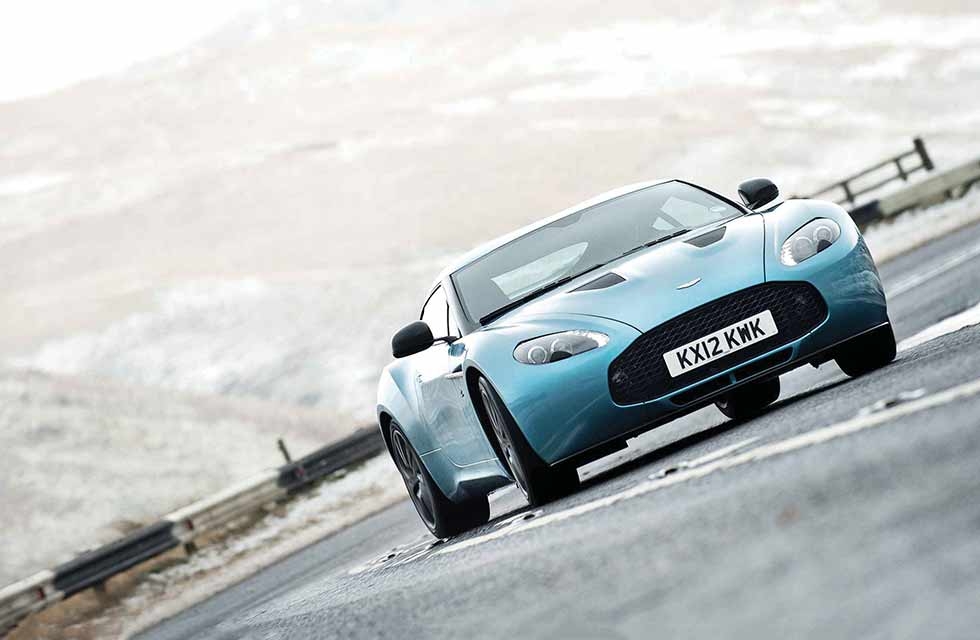 And you thought the only exclusive Aston in this issue was the green thing on the cover. But when they’ve all been built, there will be just 101 Aston Martin V12 Zagatos in the world – a mere 24 more than there are One-77s cruising around. Admittedly, the Zagato isn’t quite the ground-up creation that the One-77 is; instead it’s merely an existing model in some sharp new bespoke tailoring (although you can hardly call the Zagato’s V12 Vantage roots humble). Nevertheless, the Zagato will be worth almost as many points in your ‘I-Spy’ book of supercars as the One-77. Words Henry Catchpole. Pictures: Dean Smith.

V12 VANTAGE GETS A ZAGATO MAKEOVER

Just to recap, Aston Martin and Zagato have a long history together and this car been created to celebrate the very birth of the Anglo-Italian relationship 50 years ago. Back then, it was the DB4 GT’s bodywork that was subtly resculpted by the Milanese coachbuilder and just 20 Zagato versions were produced (although an initial run of 25 had been planned). My father recalls reading stories that mechanics hardly dared breathe near the cars for fear of denting the beautiful but paper-thin aluminium bodywork.

This modern Zagato actually has very little to do with Italy as it was designed in the slightly less flamboyant surroundings of Gaydon by Aston’s Sheffield-bred director of design, Marek Reichman. But whatever the method, I think the end result, wrought in aluminium and carbonfibre over 2000 man-hours, is stunning. There are clear nods to the original DB4, with details like the gently undulating ‘double bubble’ roof and the rounded snout. Equally there are some very modern lines, particularly the sharply slanting angles of the side windows, which have a hint of GT-R about them. The overall effect is that the Zagato appears wonderfully compact, although it actually has identical dimensions to the V12 Vantage it’s based on.

Press the illuminated end of the flush-fitting door handle and the swan door swings out and up to reveal a beautifully trimmed interior. Most of it is standard Vantage fare, but the reworked door panels, seats and, most of all, the headlining above you make it feel like a very special place to be. The leather is thick, the stitching bold, and the wavy design curiously mesmerising. There are just three ‘Z’ motifs that I can spot to brand it as a Zagato. Of course, because it’s based on a Vantage, a few of that car’s curiosities remain, like the decidedly unintuitive satnav joystick in front of the gearstick and the slightly lofty transmission tunnel which forces your elbow awkwardly high when you go to change gear.

For reasons that will become clear in a future issue of Drive-My, I got to conduct this test on one of my all-time favourite roads, the A701 from Moffat to Edinburgh. It’s a perfect stretch of tarmac for the Zagato, being wide and well-sighted enough to let the V12 properly off the leash. Through the tighter early corners where the road climbs steeply, the Zagato instantly displays a lack of traction as it tries to deploy 510bhp and 420lb ft onto the cold tarmac (despite wearing Pirelli Sotto Zero winter tyres), and it’s obvious why the claimed 0-62mph time isn’t better than 4.2sec – I imagine it simply struggles to get smoothly and smartly off the line. Thankfully the traction and stability controls are extremely good, intervening so beautifully gently that you wouldn’t know power was being stifled if you covered the flashing orange light in the dash.

The controls feel very natural with a pleasing weight to them, particularly the pedals. Press the Sport button in front of the gearlever and the throttle response sharpens and the bellow from the V12 increases. And what a voice it has: from inside there’s a deep, almost baleful sound, while from outside or through a tunnel with the windows dropped it sounds like a pure-bred race car. It is the sort of glorious, emotionally resonant noise that would make even the most shy and retiring person want to change down and blip the throttle gratuitously over and over again.

Such is the flexibility of the 5.9-litre engine that you can leave it in sixth and flow down the road tackling everything from slow corners to long straights, riding the effortless reserves of torque. Use the full range of gears, though, and the Zagato is as stonkingly fast as you’d hope a small car with a big motor would be. Thankfully the large carbon-ceramic brakes (398mm at the front) have plenty of power and feedback, although they can be momentarily disconcerting if they’ve cooled down (like on a long motorway stretch).

You’re aware of the size of the engine in the nose, though, as it takes a moment to settle the weight onto the outside front tyre as you turn in and you find yourself using the throttle to drive through the corner more. But the steering is communicative and the Zagato retains a fundamentally enjoyable front-engine rear-drive balance, making it an incredibly rewarding car to drive quickly. Slacken the DSC either to its well-judged halfway Sport setting or switch it off completely and the Zagato is happy to oversteer once you’ve got the front turned in and hooked up. As you’d expect, it can be quite a hooligan, but I think it feels most rewarding at quite understated slip angles.

At £396,000, or approximately three times the price of a standard V12 Vantage, it might seem hard to make a case for the Zagato in purely financial terms. Yet when you clap eyes on it, all possibilities of rational thoughts seem to melt away from your brain. The fact that it is based on the best drivers’ car Aston Martin makes, and that it is almost as rare as a One-77 just adds even more to its aura. It is a deeply, deeply desirable car.

–  We didn’t get one for Christmas