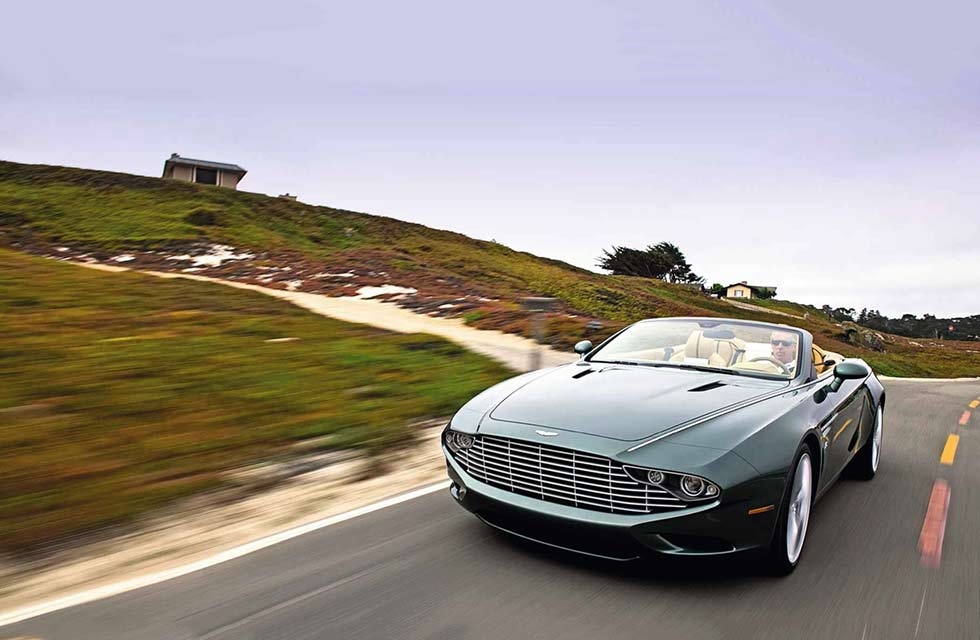 You don’t need to know a lot about design to be struck by its line. If you’re a Catholic, it’s one of the five proofs of the existence of God – man’s ability to recognise beauty when he knows nothing of what he’s looking at. Like when we look at women… And horses…’

There’s a twinkle in the eye of Peter Read, the California-based car collector with a passion for Aston Martins, as he tries to explain his affection for the brand, and in particular for the progeny that result from the union of Aston Martin and Zagato. It’s a relationship that he has had a major part in rekindling, having been the driving force behind the DB7 Zagato of the early 2000s, and now this one-off DB9 Spyder. You won’t be surprised to learn that he has a DB4 GT Zagato in his garage, too.

‘It was the DB7 that brought me into contact with Andrea Zagato,’ says Peter. ‘The company was looking for a financial backer, and together we created a one-off car called Georgia. We took it to the Paris motor show and sold 100 of them, before we’d built a single further example.

‘I brought Georgia to the United States – with some difficulty, because it’s right-hand drive and hadn’t been Federalised – and put it in a box with a letter to my grandson, to be opened on my 100th birthday in 2042. Andrea and I also created a book called In the State of Awe, which was so titled because, when you see a car like this, it’s kind of a heavenly experience.’

The DB9 Spyder Zagato Centennial – to give it its official title, Zagato having chosen the ‘y’ option in the vexed question of whether it’s a Spider or a Spyder – is, says Peter, a direct continuation of the DB7 theme. The style is deliberately retro, most evidently in the way the headlights are old-school circular items flanking the front grille, rather like the original William Towns-designed DBS of the late ’60s.

The official Zagato press release contains the usual blurb about ‘merging Aston Martin’s and Zagato’s DNA by combining the elegance of design, typical of Zagato, with the soul, power and prestige of Aston Martin’ but Andrea Zagato, speaking to Vantage on the phone from his office in Milan, cuts to the chase about why the car looks the way it does.

‘We wanted to recall the big Astons of the 1980s,’ he says. ‘If you put the headlights in the front grille, rather than fair them into the bonnet, it makes the front of the car appear longer and gives it extra presence.’

And he’s right – the more you look at the Spyder, the more it reminds you of the John Heffeman/Ken Greenley-designed Virage of the late 1980s. There’s that same muscular stance, the same elevated haunches, a similar rising line running straight from nose to tail. The new car has considerable presence but it avoids the heaviness that characterises the Virage, a car that now seems as much of its time as red braces and brick-sized mobile telephones.

Design houses today have much less freedom than they did in, say, the 1950s and ’60s, with key features such as the position of lights and the windscreen rake having to remain exactly the same as on the factory-bodied original. That’s a real challenge for companies such as Zagato, who use expensive computer modelling equipment to push the envelope while keeping the legislators happy. Like many design houses, Zagato has an impressive digital gallery where clients can see computer-generated images of a proposed design, which are viewable from any angle and set against photo-realistic backdrops that reflect convincingly in the ‘virtual’ paint.

While it must sometimes feel terribly confining for the design house stylists, who are obliged to make their creations overlay a blueprint drawn up by someone else, sticking to the letter of the law is vital because it means there’ll be no subsequent problem in registering the rebodied vehicle for use on the road. Following his experience with the DB7 Zagato prototype Georgia, Peter Read was taking no chances when it came to commissioning his DB9 Spyder from Zagato.

‘What I like about the car is that we built it to be used,’ he states. ‘It has all the original safety features and it’s allowed into California because we bought the DB9 here and then shipped it to Europe to have an Italian suit fitted. That was always the idea – Italian style and fineness of line married to British engineering, its power and strength.’

Working with Peter’s DB9 Volante donor car, it took Zagato about a year to create the Spyder, from initial sketches to finished vehicle. Its weight is quoted as being the same as the Volante’s – it has to be, to satisfy the lawmakers – and the running gear and bodily underpinnings are completely standard. So, to all intents and purposes, it drives exactly like a regular Volante.

The car’s interior has also been left largely unchanged, apart from being retrimmed in buckskin hide with a subtle green stripe down the facing of each seat. Andrea’s wife, Marella, had a hand in this; the daughter of another great Italian name in cars, Piero Rivolta, she is an accomplished interior designer who often contributes to Zagato products.

Zagato chose to unveil the Spyder – and its DBS Coupe counterpart, about which there’s more in the panel, right – at Aston Martin’s Centenary celebrations last July in Kensington Gardens, London. It was a particularly apposite occasion, says Andrea, ‘because, when you give someone a birthday present, timing is important. These cars were our present to Aston Martin, and we felt the Centenary celebrations were the correct time and place to reveal them.’

Warming to his birthday-present theme, Andrea explains how the two Zagatos came as something of a surprise to Ulrich Bez, Aston Martin’s CEO. ‘Ulrich had seen some early design sketches, of course, but the first time he saw the finished cars was when they were rolling off the transporter, the night before the Centenary event in London.

‘If you give someone a present, you should be paying tribute to them and not yourself,’ he elaborates. ‘Therefore, we did not set out to create an Aston Martin with a typically “hot” Zagato body, a racing car’s body. The idea was to offer a top-of-the-range Aston Martin that is far removed from, say, a baby Lamborghini, but instead would appeal to the person who might also be considering a Bentley.’

While the Spyder and Coupe make an impressive and complementary pair, they are only two-thirds of the story. Vantage can now reveal that it was always Zagato’s intention to build three cars, with three different body configurations, and that the third of the trio will be a shooting brake.

‘I cannot reveal the identity of the collector who has commissioned this car, or say for sure yet when it will be unveiled, but you won’t have to wait very long,’ teases Andrea.

As this magazine went to press, the Geneva motor show was less than a month away – but, if we were betting men, we’d put our money on the shooting brake making its debut at the Villa d’Este Concours in May. Held in an exquisite setting beside Lake Como, this exclusive classic car gathering allows in a handful of new concept and show cars every year, and it would be the perfect showcase for a new Zagato. It also has the benefit of being just up the road from Milan, which is handy when exhibiting cars on which the paint may have barely dried.

But that’s just our best guess. As they say – watch this space.

Above and above right: Andrea Zagato’s wife, Marella, dressed the Spyder’s interior; the V12 engine is stock DB9 and provides scintillating performance on Californian roads.

At the same time Zagato was building Peter Read’s DB9 Spyder, it was also constructing a DBS-based coupe for a Japanese collector. The DBS Coupe Zagato Centennial (below) features the trademark double-bubble roof and a distinctive bright-metal razor-slash that kicks up around the rear side windows and across the top of the rear screen.

While Zagato’s Stephane Schwarz (former head of Nissan Design Europe) was in charge of the Spyder, the Coupe was the pet project of Nori Harada, the Japanese-born stylist who has headed up Zagato’s design department for many years. This explains why – aside from the roof – there are detail differences between the two. As Andrea Zagato points out: ‘These little elements of difference are all part of the appeal of owning a one-off car.’

Zagato wouldn’t disclose the identity of the buyer but we believe he is Kazunari Shirai, aged only 41 yet one of Japan’s richest men. Shirai is an entrepreneur and venture capitalist, with interests in a wide range of businesses, including fashion. It was during one of his regular visits to Milan that he met Andrea to discuss commissioning a unique car.

‘This gentleman likes Zagatos, and had recently bought an Alfa Romeo TZ3,’ says Andrea. ‘His dream was to have a one-off based on his favourite brand – Aston Martin.’