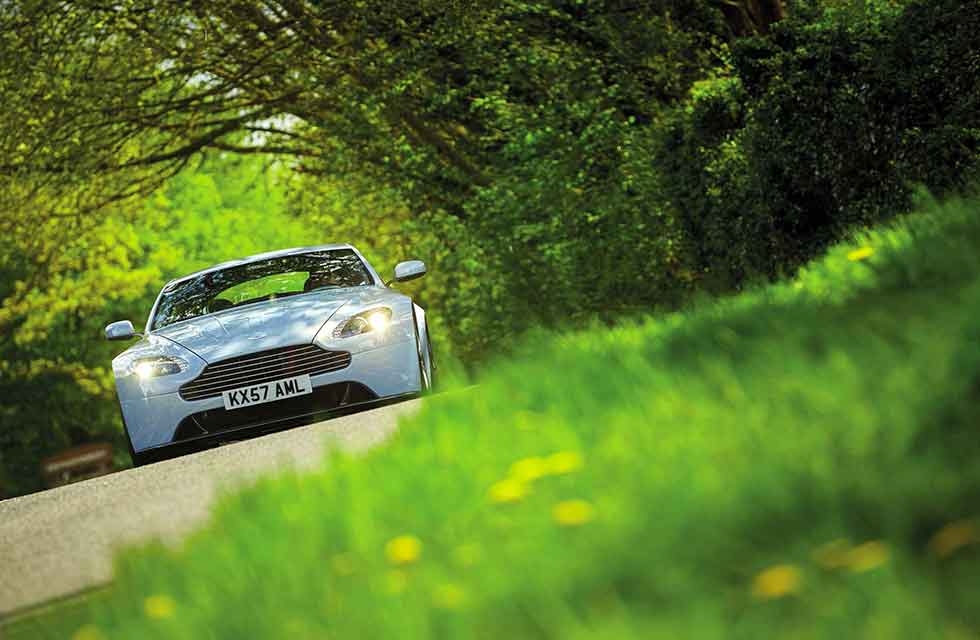 Vantage RS Concept. It proved a V12 Vantage was possible. It also makes a savagely quick road car. The idea of squeezing Aston’s mighty V12 engine into the compact Vantage bodyshell sounded like a flight of fancy. The RS Concept proved that it worked, and the rest is history. But how does a one-off concept shape up as a road car? Here’s where we find out. Words Richard Meaden. Photography Matthew Howell.

It seems hard to believe, but there was a time when the V12 Vantage was a pipe dream. One that a small team of Aston Martin engineers believed to be possible, but one that was by no means certain to make production.

‘The ultimate ship-in-a-bottle engine installation was not only possible but a living, breathing reality’

In attempting to fit its most compact sports coupe with its largest engine, Aston fired all our imaginations. But it wasn’t until we clapped eyes on the one-off Vantage RS Concept that the dream seemed real. No vacuous show pony, this fully functioning proof-of-concept engineering exercise established that the ultimate ship-in-a- bottle engine installation was not only possible but a living, breathing reality.

The first official glimpse of the RS Concept was in December 2007, at the grand opening of Aston Martin’s brand new Design Studio. This was peak Bez-era Aston. Full of optimism, dynamism, and riding a wave of investment, state-of-the-art facilities and burgeoning pre-recession sales volumes. The audacity of the RS Concept captured that mood brilliantly.

Looking is one thing, driving quite another, but again Aston raised the bar. First by showing the RS Concept at the 2008 Geneva show press day, then whisking it away to the Paul Ricard race track, where just a few days later a select group of media would be allowed to drive it, unaccompanied and as fast as they liked.

I was among that privileged group. Having fallen in love with the RS Concept from the moment I first saw it at that Design Studio opening, to drive it was off-the-scale exciting. Especially as we were gatecrashing Aston Martin Racing’s pre-season test and sharing the track with DBR9s and the then-new Lola-Aston LMP1 car (as featured in this very issue).

Remarkably, the RS Concept was one of the fastest cars through Ricard’s speed traps, spearing down the legendary Mistral straight at velocities that left the Le Mans class-winning DBR9s floundering in its wake. The race cars had their revenge through the corners, but it mattered little; the feral and ferociously powerful RS Concept had done its job. All who drove it were utterly seduced. The message from the media was crystal clear: Aston Martin had to put this car into production.

The rest, as they say, is history. The V12 Vantage was a production reality a little over a year later, and, while it had been toned-down compared with the race-raw RS Concept, it remained an extraordinary car. With that colossal 5.9-litre V12 shoehorned beneath its louvred bonnet, it went and sounded like no

Vantage before it, while the way in which Aston had taken us along for the ride throughout its development bestowed the production cars with almost instant mythical status.

As with almost all prototypes, after its early starring role during 2007/ 2008, the RS Concept was decommissioned and, in this case, put on display at the British Motor Heritage Museum from 2009 to 2010. It then disappeared from view until 2013, when it was acquired by a prolific Aston Martin collector, who not only wanted the SVO team at Wellesbourne to recommission the RS Concept to full running order but put it through the IVA process and register it for the road. Further maintenance and update work was carried out in 2017 and the car has now been placed in the hands of renowned Aston Martin specialist Nicholas Mee & Co, where it is currently for sale. Or at least was at the time of writing.

‘It was the opportunity of a lifetime, to drive my all-time favourite modern-era Aston on the road’

And that’s where I imagined the story would end, until a chance meeting with the owner led to a conversation about a drive in the RS Concept. With the ever-helpful Mee & Co more than happy to assist, I found myself with an opportunity of a lifetime. Namely to square the circle and drive my all-time favourite modern- era Aston on the road.

To understand why driving this car on the road is such a big deal (for me, at least) you have to look beyond the RS Concept’s bone stock appearance. We’ve become used to cars of this ilk being festooned with aerodynamic addenda, but this was always the beauty of the RS Concept; it might have been carrying a very big stick but its styling spoke quietly, hinting that there was something different about it but never explicitly.

There’s some irony here, for although the RS Concept heralded what would be very much a road car in production form, not only was this prototype only ever driven on track, but its engine came straight from the DBRS9, Aston Martin Racing’s GT3 derivative of the DBR9 GT1 car.

Free from the air restrictors employed in GT racing to balance performance between disparate cars, the RS Concept’s V12 was unfettered, delivering 580bhp and 500lb ft of torque on AMR’s engine dyno, according to the car’s records. With a six-speed manual gearbox and a very trim kerb-weight of 1500kg thanks to use of carbonfibre for the tailgate and aggressively ‘gilled’ bonnet, plus carbon brakes and a pared-back interior stripped of air- conditioning and hi-fi, it was a truly aggressive and uncompromising machine.

Its raw power and ballistic pace at Paul Ricard have stayed vivid in my mind for more than a decade, so it’s with some trepidation that photographer Matt Howell and I prepare to head out onto the roads around Mee & Co’s fabulous new Hertfordshire base.

The RS Concept’s interior is plush, thanks to extensive use of Alcantara, but the centre console and the supplementary display that sits in front of the regular instrument binnacle betray the car’s racing DNA and engineering prototype roots. From cold you have to build oil pressure before starting the engine, which entails turning the motor on the starter with the fuel pumps switched off. Once the oil pressure reading breaches 2 bar you can then engage the fuel pumps and fire the V12 into life.

It starts hungrily, with a sharp, inertia-free bark, before settling into a fast, impatient idle, while an exploratory squeeze of the throttle suggests its response is sharp enough to shave with. And, of course, there’s the added joy of a manual gearbox to connect you even more closely with the machine.

We head off through leafy lanes, the bark of that racing V12 followed by a high-decibel Morse code of pops and bangs that spit from the pair of gently silenced exhausts. With no air- con, the heat-soak from engine and transmission soon radiates into the cockpit, at which point you have no choice but to drop the windows. Unfortunately, this draws some heady fumes into the cockpit (I suspect a breather might be pinched or need re-routing), but it certainly accentuates the wild soundtrack reverberating off walls, fences and even the leafy trees. Aurally speaking, it’s an animal.

It’s pretty hardcore in all other respects, too. The fully adjustable suspension betrays its original track-only role, but there’s enough pliancy for it to negotiate lumpen lanes without being deflected from your chosen line. There’s plenty of grip and the steering is brilliantly direct with plenty of feel and reassuring weight, so you have a sense of something to lean on as you make your initial steering inputs.

Needless to say, what makes the greatest impression is the explosive performance. Pretty much whatever gear you’re in, the RS Concept yelps forwards. If that gear happens to be second, third or fourth, it really is savagely accelerative. Not in the manner of a heavily turbocharged car, such as a Porsche 911 GT2, but as only a big-capacity, race-tuned, naturally aspirated V12 can. It’s utterly breathtaking and totally addictive. In truth it’s a bit too much for the public highway, just as it felt wildly, relentlessly accelerative at Paul Ricard all those years ago. That’s why I fell in love with it then, and why, despite the heat and the fumes and the rabidly responsive performance, I love it all the more now I’ve experienced it on the road.

One last surprise is the asking price, which is circa £350,000. Yes, it’s a ton of money by any normal standards, but, as you’ve gathered, this is no normal car. As significant as any of the great Aston Martin rarities, its place in the marque’s 21st century history is as assured as its story is unique.

Pricing of one-off prototypes is always very difficult because there is no precedent by which to set a valuation. Likewise, buyers are thin on the ground and the cars are not straightforward to own. Nevertheless, it does seem crazy that the car to which we owe the very existence of the V12 Vantage and its descendants should be priced at £350,000 when the last-of-the-line Vantage V600 ‘Dreadnought’ (as tested in the last issue) was almost three times as much.

It isn’t anywhere near as useable as the V600, but it speaks volumes for the RS Concept that even the hardcore ‘Q by Aston Martin’ commission is a little tame by comparison with its ultimate progenitor. It’s absolutely not for everyone, but if I had the money the RS Concept would be mine in a heartbeat.

With thanks to the owner and nicholasmee.co.uk

Below: Just the thing for the occasional track-day, Owners Club meet or early-morning blast? If your pockets are deep enough, the RS Concept makes a pretty compelling case as a collectors’ Aston. Right: RS Concept is wonderfully subtle in appearance for such a thrillingly potent machine. When Aston unveiled it in 2008, it was as a track car only, but subsequent private owner put it through Individual Vehicle Approval and had it road-registered.

Above and right: The last time Meaden drove the car was in company with Aston’s DBR9 Le Mans racers at the Paul Ricard circuit a few days after its unveiling in 2008. It was staggeringly quick then, so no surprise that it feels breathtakingly rapid on the road today. The V12 under the functionally slatted carbonfibre bonnet was basically a race engine from the DBRS9. Clockwise from above: Handsome 19in alloys, track-biased Pirelli P Zero Corsas, and giant carbon- ceramic brake discs; race-style adjustable suspension; supplementary display a clue to car’s prototype roots; dry-sump oil tank and data-logger share boot-space; competition-style fuel filler cap, and delightfully tactile gearstick for six-speed manual ’box.