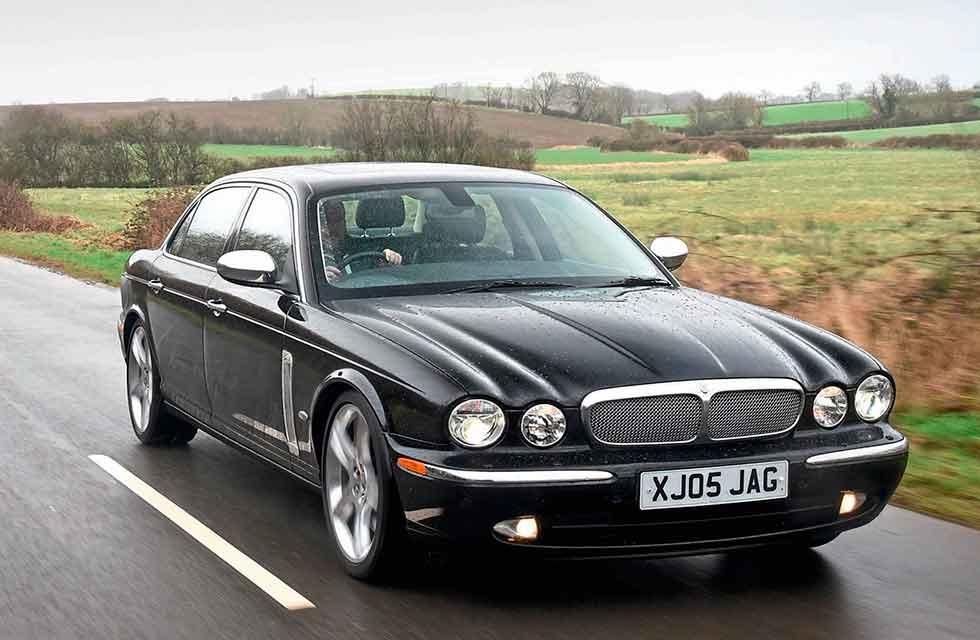 The very last Jaguar off the line at Browns Lane was the only Portfolio to be built there, making it a very special car, indeed. We take it for a spin and look more closely at the XJ Portfolio model. Words Craig Cheetham. Photography Paul Walton.

The final car to leave the Browns Lane assembly line in 2005 was also the X350’s most luxurious and expensive model, the Super V8 Portfolio. We drive it.

style=”light” size=”5″]Friday, 1 July 2005 remains a poignant day for Jaguar and its enthusiasts, because it marks the moment the last car rolled down the Browns Lane assembly line. The factory had been the home of all Jaguar production from 1951 until 1998 and was where the flagship XJ saloon had been manufactured throughout its life, from 1968 until the tracks fell silent.

It is fitting, then, that the last car off the line was an XJ, and a very special one at that. Today, XJ05 JAG is part of the Jaguar Heritage Trust fleet where, among its more modern exhibits, the car is one of the most significant. But, more than that, it’s the ultimate X350 XJ – a long-wheelbase supercharged Super V8 Portfolio in pearlescent Black Cherry, a colour specific to the nameplate that would go on to grace only the most superlative of Jaguar models.

The Portfolio models were to be introduced for the 2006 model year, but were previewed with the last XJ built at Browns Lane. They would be the epitome of both performance and luxury, powered by a 400bhp 4.2-litre V8 and equipped with every conceivable extra. Their two core markets were the USA, which favoured the LWB Super V8, and the UK, where the Portfolio was offered as a derivative of the SWB XJR, though a Super V8 could be ordered on request. In the USA only, the Portfolio was also offered in a colour known as Winter Gold, a pale and pearlescent hue that was said to represent the shade and texture of a glass of fine champagne.

Both were based on the 2004 Concept Eight, shown at the 2004 New York Auto Show and featured styling cues that would later be seen on the facelift XJ models the next year, including the distinctive silver side fins that were normally only found on X358 models. For the US market, the Super V8 Portfolio had a price tag of US$129,995 (around £80,000 at the time), while in the UK the list price of the XJR variant was £74,995.

The specification was incredible. As well as the unique Black Cherry paintwork, the car received an exclusive polished mesh grille and 20in alloys, along with Chestnut-coloured premium leather and matching lambswool overmats. The dashboard had a different treatment, too. Instead of the burr walnut or black ash fascia found in the standard XJR, the Portfolio came with a matt finish ‘Conker’ wood trim, used only on the model, and finished by hand. The wood pattern was natural and different in every car, giving it a look that was a carefully developed medium between the opulence of luxury-specification XJs and the sporty appearance of ‘R’ models.

The Portfolio was as much about its passengers as it was about its driver, so it was offered with four-zone climate control, one for each corner of the cabin, while the standard specification was a pure four-seater, with the middle of the rear seat given over to an armrest with chiller cabinet and power sockets. A standard bench seat was a no-cost option. Flat screens were integrated into the back of the car’s front head restraints, with a DVD player built into the armrest.

While these features were offered as options on all XJ models, the Portfolio brought them together in one package. Even in entry-level 3.0-litre XJ6 form, the X350 generation of XJ was a sumptuous car, but the Portfolio was the absolute epitome of luxury. It was as posh and as fast as a Jaguar saloon car could be, and while production numbers were extremely limited, it was a tantalising flagship and a car that was every inch developed by enthusiasts for enthusiasts. Just 300 were made – 150 for the USA, 100 for the UK and 50 for the rest of the world. It was the ultimate Jaguar saloon, and, in many ways, still is.

Our reasoning for this is that despite its modern extruded aluminium construction and clever use of lightweight technology, the X350 is probably the last Jaguar that was a truly glorious anachronism – a politically incorrect car that harked back to the days where a big and expensive Jaguar was both a statement of wealth and of a passion for motoring. Those are facets that still stand true to the brand today, but in less of an unapologetic muscle car mutation. The times have changed and Jaguar has changed with it, in many respects for the better, but, for many of us, it’s the big old saloons that go like the clappers that are the true definition of the brand.

And that’s exactly what this car does well. XJ05 JAG is a truly wonderful car for many reasons, not least its provenance and the fact that it’s a top-spec X350 with less than 5,000 miles on the clock. But, even if it wasn’t the car it is, and was a ‘mere’ standard Portfolio, it would still feel like something special, because that’s what the Portfolio always was.

It drives like a standard Super V8, but that’s no bad thing at all. For starters, there’s the soundtrack – a muffled V8 with a rortiness that’s kept at bay by acres of soundproofing, but which still makes its presence felt when you bury the accelerator pedal – whereupon the back end hunkers down, the supercharger emits a shriek of delight and it powers towards the horizon with an alacrity that belies its bulky dimensions.

But being fast isn’t its only party trick, for the Sport chassis fitted to the XJR and Super V8 models is a beautifully composed and wonderfully rewarding piece of engineering. It has balance and smoothness, coupled to steering that’s perfectly weighted. It feels quite manageable at low speeds, as it ought to, but as I pick up the pace it weights up nicely to give a sports car-like feel and a direct turn-in. It’s quite clear that Jaguar’s chassis engineers remained true to the XJ’s always supreme handling when developing the Portfolio’s underpinnings, and it manages to combine terrific poise and handling with a fabulous ride quality – something that even to this day is unique to Jaguar saloon cars and has yet to be bettered.

But, alongside those traditional traits, expressed by every Jaguar saloon ever made, the Portfolio has a sense of occasion that no other X350 can muster. The cabin is unique, its colour scheme brilliantly thought out to create an aura of luxury and sportiness that manages to combine the opulence and sense of occasion afforded by Sovereign models with the subdued and more driver-focused cabin of sportier models.

In the rear, it is both elegant and spacious – at least in LWB Super V8 form – while the separate climate control buttons for rear-seat passengers remind you that this car is as much about those in the rear as it is those in the front.

We know where we want to be, though, and that’s sitting in the captain’s chair steering one of the most significant Jaguars ever made. And it’s significant on many levels: the emotional, because of this car’s historical importance (Browns Lane, incidentally, is now partly an industrial estate, Lyons Business Park, named after Jaguar’s founder, and partly ‘executive’ housing called Swallows Nest); the emotive, because of the way it stirs your senses; and the passionate, because this is as good as a Jaguar saloon car could have got in July 2005, three months before a Portfolio was technically available. Indeed, in many ways it’s as good as a Jaguar saloon car can get full stop, for while the X351 XJ is a great car on its own merit, it forgoes some of Jaguar’s traditionalism for a formula that makes it more competitive against less-historied rivals, but less characterful as a result.

If you’re a Jaguar saloon car traditionalist and you have the budget, then an XJR Portfolio will not disappoint. Indeed, far from it. It will delight in every manner conceivable and is a car so true to Jaguar’s customary idiosyncrasies that it’s impossible not to love it.

A ‘standard’ one is a wonderful thing if you can find one, but they’re not cheap.

Yes, they are only a proportion of what they were new, but you’ll still need £20k to find a good one, and with decent X350s available from less than £3,000 that’s a difficult equation to justify – but this was always going to be a collectors’ car from the day the order books opened (and, indeed, closed) before production began.

The launch-spec Portfolio was an instant sell-out, and that tells you all you need to know about both its significance and about how well executed that vision was.

But, no XJR or Super V8 Portfolio can match the importance of this one — the only Portfolio to be built at Browns Lane and a fitting swansong for a location that played such a huge part in the overall Jaguar story.

On that fateful day in July 2005, XJ05 JAG was handed over by the company’s CEO, Joe Greenwell, to the Jaguar Daimler Heritage Trust to a life of being a museum exhibit, albeit one that has been kept (and used) in roadworthy condition by the company’s band of willing staff and volunteers, who all live and breathe the Jaguar brand.

As it came down the line in the Coventry suburb of Allesley, there were cheers and applause from the workforce, a handful of whom had been there in 1968 as apprentices when the very first XJ6 came off the tracks. It was a bittersweet moment for the workforce, as around a third of them were laid off following Jaguar’s admission that maintaining three factories was ‘unsustainable’ and that Browns Lane – which was both outdated and on land that was easily marketable – was the natural choice for closure.

“We have a great history here and we are proud of what we achieved,” said Joe Greenwell at the handover. “But the reality is we need to move forward, streamline, modernise and diversify. This site will always be a monumental part of Jaguar’s history.

Today, that monument is a brass plaque on the way into the new development, while Ford, which took the decision to close Browns Lane, has long since handed over the reins to a new owner that has seen Jaguar modernise and diversify in ways many of us would never have imagined. But, XJ05 JAG remains a testimony to what Browns Lane meant, delivered and achieved. It’s a hugely important Jaguar and one that is very easy to fall in love with.