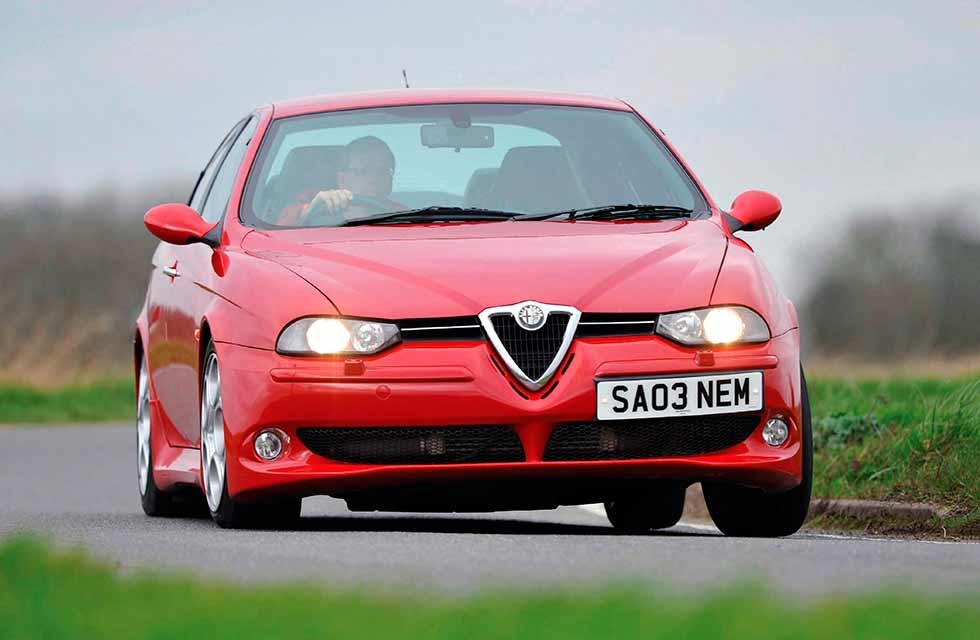 Supercharged 156 GTA can it handle 320bhp? As if the power and torque of Alfa’s 3.2-litre Busso weren’t already generous, this 156 GTA adds a stonking supercharger into the mix. And after a test drive, we’re feeling pretty charged up ourselves… Story by Chris Rees. Photography by Michael Ward.

How does the GTA go with 320hp of grunt?

Yes, it’s no shame to admit it: I love the Alfa Romeo 156 GTA. Glorious Busso V6 soundtrack, 250hp of delicious power, one of the most handsome shapes of any saloon, and relatively rare – it’s got a lot going on. But I’m certainly not blind to the GTA’s foibles. When it was launched, it was widely criticised – and I include myself here – for its suspension, which was clearly set up for smooth racetracks, not potholed British B-roads. Early cars’ brakes really weren’t up to much. And the GTA loved to torque-steer with the sort of manic zeal that few cars, before or since, ever have. So the notion of shoehorning a supercharger into a 156 GTA may seem like utter overkill. After all, the GTA already enjoys plenty of power (250hp out of the box), and it already struggles to put that much down through the front wheels. Adding even more power by ’charging the engine – we’re talking around 320hp here – looks pretty bonkers. But let’s face it: being bonkers is almost a prerequisite for GTA ownership, so why not? It fits.

“Torque delivery is lusciously linear. The higher up the rev band you go, the more you get. Lovely!”

Jamie Porter at the Alfa Workshop has just handed me the keys to this supercharged 156 GTA so I can find out myself how it goes. It’s really not long before I’ll discover that… well, it’s bonkers. Good, I think we’ve established that!

But first, let’s get a bit of background on what the 156 GTA is, and why it’s so special, even without a supercharger. In many ways, the choice of ‘GTA’ badging for Alfa’s hottest ever 156 was an odd one. When it was launched in 2001, this was the first time in 26 years that Alfa’s iconic three-letter moniker had been used, but the ‘A’ in the badge didn’t stand for its original meaning of ‘Alleggerita’ (or ‘lightened’). No, the 156 GTA was 55kg heavier than the existing 156 2.5-litre V6 model. No, I’d say the ‘A’ more fittingly stood for ‘Aggressiva’ because Alfa’s sensational 3.2-litre Busso V6 delivered fully 250hp. That was about as much as any front-wheel drive car of the time ever had.

The 156 GTA was always a rare beast. Of a total of 4651 examples built (see panel for the full breakdown of versions), it’s thought that a mere 350 were imported to the UK. The owner of this GTA saloon – who’s had it from new, incidentally – also has a supercharged Ford Focus RS, so he’s clearly a ‘fully ’charged’ sort of chap. Good man!

The people behind the supercharger conversion on this 156 GTA are the legendary Alfa specialist, Autodelta. No, not Alfa’s long-dead racing division, but the London-based tuner run by Jano Djelalian, the acknowledged expert on supercharging Alfas. Not only does it have a slinky supercharger (neatly tucked away in the bumper area) but larger fuel injectors and an ECU remap, too. As an aside, Alfa Workshop informs me that ECUs for 3.2-litre Alfas are no longer obtainable, but it’s got a workaround for it. Phew!

This car has been on the dyno and, as a result, we can confirm that its power output fully matches Autodelta’s original claim for the engine: 320hp. To drive, it certainly feels like it’s got every one of those 320 horses. However, it’s not really the outright power that impresses – it’s the torque. The supercharger simply adds torque everywhere. Unlike a turbocharger, whose effects come in only after a delay and only above a certain rev threshold, the supercharger is at work all the time, at all rev ranges, and suffers from no ‘lag’ whatsoever. Its torque delivery is lusciously linear: always there, and the higher up the rev band you go, the more you get. Lovely!

All you hear is a whistle – yes a whistle (rather like a turbo in fact), and quite unlike the whine you get from, say, a Mini Cooper S. There’s even a bit of chatter on the overrun, a bit like a turbo wastegate. The supercharger’s persistent, ever-present noise is not unpleasant, but I can see that it might become a little tiring on longer journeys. This is a great ‘Q’ car because it looks just like a standard GTA. Well, almost. There’s a non-standard bee-sting aerial on the roof and an aftermarket array of reversing sensors on the back bumper (both of which look a bit odd, I reckon). Far more likeable is the non-standard quad-pipe exhaust by Ragazzon, which sounds lovely without being excessively noisy; fruity but civilised.

With 75,000 miles on the clock, this car feels tight – not too surprising since it’s been mechanically very well cared for (it has an extensive history with the Alfa Workshop from 2010 to date) and has recently had a new cambelt fitted (vital for any Busso engine owner’s peace of mind).

This is a six-speed manual GTA, and the gearbox works very well indeed. New you could order Selespeed semi-automatic, but very few people did in the UK. I’m not sure how well Selespeed and a supercharger might work, either…

Thankfully, this car has the larger 330mm front brake conversion, something that the Alfa Workshop did. This is an improvement that Alfa itself actually rolled out on the GTA after a while; the GTV-type 305mm discs fitted to early cars were definitely below par, so the 330mm disc retro-fit is a must-have if you’re a GTA owner: they just work much better.

You know I said earlier that the supercharger adds torque everywhere? Well, that includes the steering. If you’ve got any lock on the steering wheel at all when you press the accelerator, you’ll know all about it, because the front end leaps wildly in that direction. Modern high-power front-drive hatchbacks have uniformly dialled out this effect, through the extensive use of electronic diffs, ingenious suspension knuckle joints and all sorts of electronic aids. Not so the GTA, which predated all such interventions. It’s just you, your hands and your right foot.

OK, not quite just you; this car has an Alfa Q2 limited slip differential fitted. The Q2 is pretty much the first port of call for any GTA owner, because the original Alfa diff not only suffers torque steer and feels somewhat ‘numb’, but it also has a worrying propensity to explode. The Q2 diff lets you put the power down more easily and more reliably, increasing grip levels on corner exits, and also improving turn-in. Not that torque steer is by any means eliminated, you understand.

The suspension on this car is completely standard. It’s better than some GTAs I’ve driven but it’s not as incisive as a car fitted with coilover suspension, which a lot of GTA owners do opt for. It’s not hard to see why: the standard GTA’s set-up can feel compromised on UK roads. The considerable weight over the front end means Alfa chose damper and spring settings that seem at odds with a car of this performance level. The main issues are crashiness over bumpy surfaces and a sense of ‘float’ over undulating roads – added to which the GTA bottoms out even more willingly than regular 156s. On standard-size (225/45 R17) Goodyear Eagles, there’s plenty of grip but the handling sometimes has an edge to it. As we’ve seen in several articles in Auto Italia over the years, there are ways of sorting out the GTA’s handling, and I’d definitely want to have a crack with this car.

To sum up this beast of a car, adding a supercharger feels like an absolutely natural move for the GTA’s 3.2-litre Busso V6. It pulls like a mad dentist on steroids, making driving quickly on A-roads utterly effortless. As for B-roads, well, you need quite a bit more concentration!

GTA looks pretty much standard but its power output of 320hp puts it in a different league. Straight-line speed is astonishing, accompanied by an ever-present whistling sound.

This supercharged 156 GTA is currently up for sale at the Alfa Workshop, priced at £12,950 ono. For more information, contact the company at Unit 15 Orchard Road Industrial Estate, Royston, SG8 5HD. Tel: 01763 244441. www.alfaworkshop.co.uk