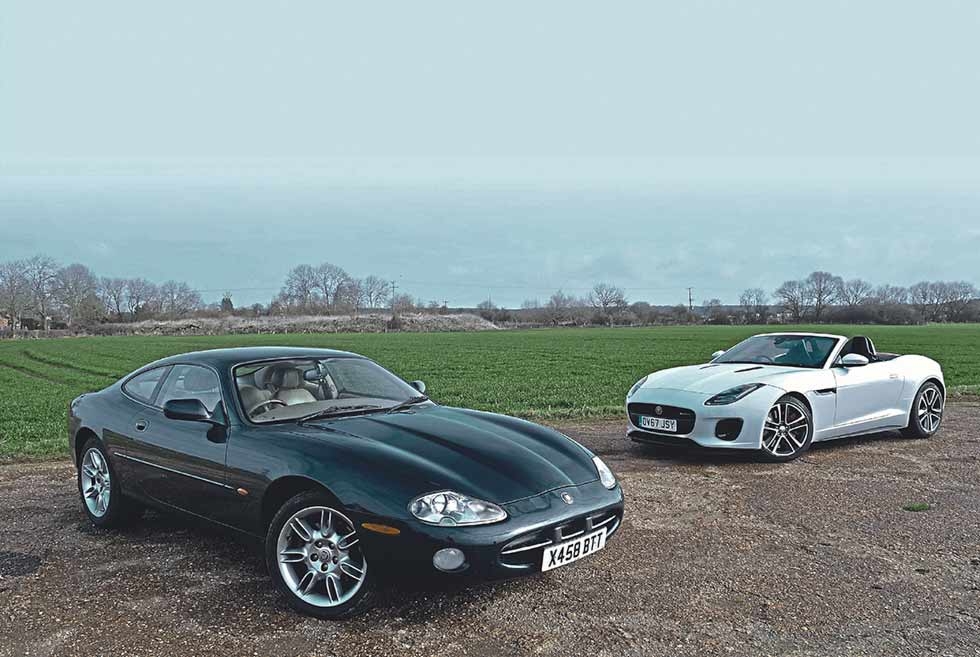 The F-TYPE 2.0 offers similar amounts of power to the original XK8 despite its engine being half the size. We drive an example of both back-to-back to discover the best method of getting to the same place. Words & Photography by Paul Walton.

Remember 1996? What heady days they were. If we weren’t singing the Spice Girl’s Wannabe then it was Skinner and Baddiel’s Three Lions. Everyone was still excited about receiving emails and we ate sun-dried tomatoes with everything. Plus, 300bhp was a huge amount of power back then. With your average family hatchback boasting a mere 60bhp, it made Jaguar’s 290bhp 4.0 V8 in its new XK8 sports car seem like a monster. Fast-forward 22 years and although some are still chanting Three Lions, 300bhp no longer seems like a lot.

We have seen improvements to turbo charging and greater efficiency in smaller engines that have led to Jaguar’s 2.0 petrol Ingenium being able to offer 296bhp (300PS); available across the range, it turns any car – including the F-TYPE – into a fine performer.

But can a smaller, turbo-charged engine offer as much excitement as a larger, normally aspirated V8? I’m driving an XK8 4.0 alongside a new F-TYPE 2.0 to find out.

Jaguar’s all-new 3,996cc V8 wasn’t just powerful when it made its 1996 debut with the XK8, it was modern too. Designed by Jaguar’s engineers (but built at Ford’s Welsh Bridgend factory), it featured twin camshafts per bank (chain driven from the nose of the crankshaft), four valves per cylinder and light alloy castings for the block and heads. Being smaller, lighter and more economical than both the outgoing AJ16 straight-six and venerable 6.0-litre V12, it helped Jaguar to become more relevant for the upcoming millennium – to be seen as a manufacturer of mainstream cars rather than of niche vehicles powered by dated engines. Yet, despite its modernity, the V8 was still a performance motor. With 290bhp, it gave the XK8 a healthy 0-60mph dash time of 6.5 seconds and a 155mph top speed, both fine figures for the late Nineties. Since then, and with growing concerns about the internal combustion engine’s impact on the environment, there has been a trend for smaller, cleaner, more polar bear-friendly motors. Jaguar still produces a V8, but with 5.0 litres and its power stretched to 567bhp when supercharged. It is only for the top-of-the-range models, unlike the normally aspirated 4.0 that had also been for mainstream. The latter job is now filled by the turbo 2.0 petrol, which comes in a variety of power sizes, from 197bhp to the 296bhp version that is available in, among others, the F-TYPE. With 179g/km of CO2 compared to the 4.0 V8’s 281g, it’s small and powerful, but still clean.

It’s also just as advanced as the V8 had been in its day, featuring a state-of-the-art electrohydraulic valvetrain with patented control algorithms that enable fully variable control of intake valve lift for optimum power, torque and efficiency throughout the engine’s operating range. The exhaust manifold is now integrated into the cylinder head casting. It’s matched with a twin-scroll turbocharger, the design of which ensures that the turbine wheel responds far more quickly so that boost is delivered near-instantaneously, making turbo lag almost non-existent.

All good stuff, but, when it comes to engines, I’m with Elvis. “Ambition is a dream with a V8 engine,” he once said. So, the XK8 you see here is my own 2000 4.0 coupe. I realise that these days cars with large, dirty engines are as socially acceptable as harpooning whales, but I still get a thrill when I turn the key and feel that big engine vibrate as it ignites ready for action.

I gently squeeze the throttle but, despite the engine’s size, the car doesn’t take off like a startled hare; its performance is steady, controllable and unsurprising. It’s not quite as lazy as Jaguar’s old 5.3-litre V12, but neither is it the high-revving buzz-box the F-TYPE’s turbocharged 2.0 can be. But it does mean the 4.0 offers incredible levels of refinement; unlike today’s raucous V8s, I can barely hear it.

It’s only when I push the small button on the gear surround to engage Sport mode that the acceleration suddenly becomes harder, the engine more responsive. Its midrange, 50mph-80mph acceleration, is when the car is at its best, though, when a stab of the throttle results in a sudden, strong burst of power. It needs to be worked hard to maintain any sort of speed but, unlike a turbo engine, this is old-fashioned, blue-blooded power and its 290lb ft of torque is always there, easily accessible. Sadly, the slow and stupid five-speed ZF gearbox lets the performance down. I could read the Sunday Times – plus supplement – in the time it takes to change up or down. Using the J-gate to manually change gears improves this, although it still doesn’t happen as quickly as with the F-TYPE’s steering wheel-mounted paddles.

Steel-bodied, weighing in at 1,653kg and with a slightly lazy engine, the XK8 was never a sports car in the true sense. The steering is too numb and lacks feel for that, plus the car suffers from plenty of body roll so corners are to be negotiated through, rather than blasted out of. On the plus side, with fabulously supple suspension, the ride is excellent and far more comfortable than the F-TYPE’s firm suspension settings. Where the car excels is as a grand tourer, for those long, comfortable, high-speed drives across the continent knowing that along with the silky smoothness and quietness of the engine there’s more power available when you need it.

By comparison, the F-TYPE definitely is a sports car and the four-cylinder is arguably the engine it’s been waiting for. Constructed from aluminium, at 1,525kg this convertible is 128kg lighter than my XK8 coupe, and its accurate electric steering and perfect 50/50 weight distribution allows the car to dance nimbly through corners, no matter how hard I push. At the front, is has stiffened dampers (the rears remain the same as the V6 models), so a series of fast left-right-left corners can’t unsettle this car like they can the XK8, so that even with my foot hard down it remains remarkably composed as I scurry through bends.

The road straightening out gives me the opportunity to squeeze the throttle pedal a little harder. Unlike the XK8’s dim-witted gearbox, the F-TYPE’s eight-speeder responds instantly, kicking down to unleash more of the 295lb ft of torque, which arrives much quicker than the XK8’s 290lb ft. Without turbo lag, the F-TYPE’s acceleration is harder than the older car’s, too, allowing it to reach 60mph in less than six seconds, one second faster than the XK8. Plus, while it might only be a 2.0-litre, there’s still a surprisingly beefy growl under heavy acceleration that gets louder when I press the Sport button to activate the active exhaust.

The real moment of joy, though, is at 4,500rpm when the engine already sounds like it’s reached the limit of its abilities and could explode at any moment and shower the countryside in tiny pieces of engine yet the car continues to accelerate. It’s only at 6,500rpm, when the engine is screaming like my cat when she’s hungry, that the needle finally reaches the red line, and I change up using the steering wheel-mounted paddles.

All of this arguably makes for a more exhilarating drive; if I were connected to a heart monitor I’m sure my pulse would have quickened significantly more piloting the F-TYPE compared to driving the XK8.

And yet, of the two, I’d still take the 4.0 coupe home (and not just because my name is already on the V5 document). The 296bhp Ingenium is a fine motor; powerful, clean, efficient, it’s everything a modern engine needs to be. Yet its diminutive size means it lacks standing. It’s a blue-collar worker engine, the sort you’d find in any mass-produced hatchback rather than an elegant and low-volume GT. Plus, at a little under £57k for this convertible (the coupe is £5,000 less), it’s the same as the XK8’s 1996 list price, which makes it far too expensive for a car with four cylinders. The market obviously thinks so, too, because very early coupes from 2017 have already dropped by almost £10k.

The 4.0-litre’s breeding is still obvious, even if it is more than two decades old. Its smooth, yet bountiful, power sets it apart from the F-TYPE’s buzzy little 2.0 turbo in the same way the warmth and maturity of a fine, full-bodied red does alongside a supermarket-branded lambrusco. Little wonder the value of these cars is marching upwards. It wasn’t that long ago you could buy an example like mine for £5k, but they’re now twice that and rising.

It’s 22 years since Three Lions was first released and it hasn’t lost its resonance with English football fans – and neither has Jaguar’s 4.0 V8 for those wanting a powerful, refined sports car.