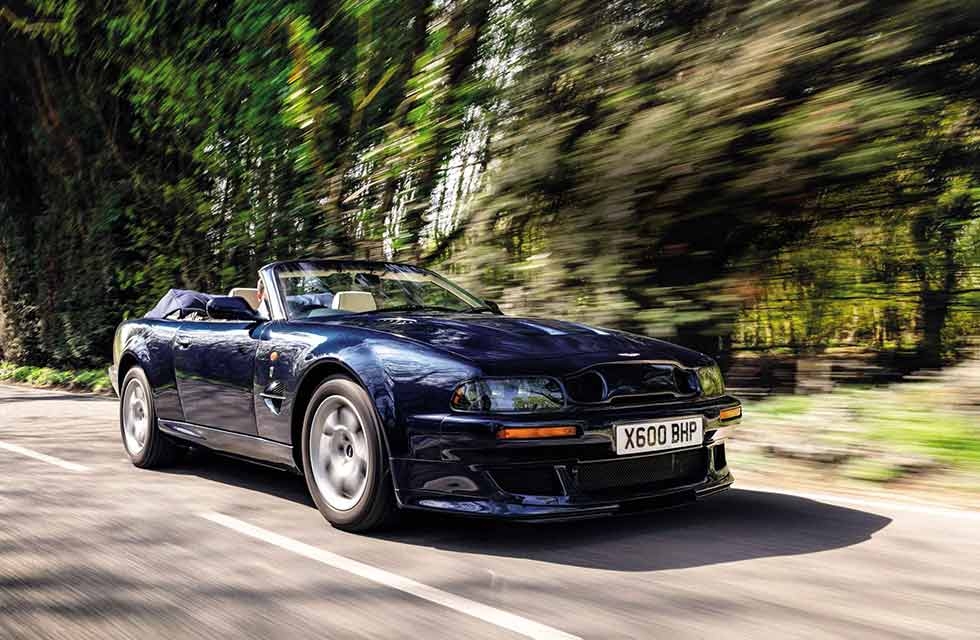 The Vantage Le Mans was created to mark the 40th anniversary of the DBR1’s famous win. Only 40 coupes were built – and a single solitary Volante. We drive it. Words Richard Meaden. Photography Max Earey.

There was only one Vantage Volante built to Le Mans spec. We drive it.

There’s an awful lot to love about the big old twin-supercharged Vantages. For many, they represent the last ‘true’ Aston Martins, their steel platform chassis, aluminium bodies, V8 engines and sumptuous interiors all laboriously and lovingly crafted by hand in Newport Pagnell’s by-then somewhat Dickensian facilities.

It all seems a very long time ago now, but I’m old enough to remember these cars when they were new. Indeed, I drove a number of them for magazine features, enjoying the ritual of arriving at Newport Pagnell and being ushered to the Board Room across the road at Sunnyside, where I’d wait to be handed the keys while HRH The Prince of Wales peered down at me from a portrait on the wall.

‘It feels brimming with energy, and when you gun it there’s no doubting that this remains a breathtakingly quick car’

I have extremely fond memories of those times and the magnificent brutes that defined them. I’ve done lots of miles in V550, V600 and V600 Le Mans, but I’m somewhat ashamed to say that until now I was blissfully unaware of this – the one and only V600 Volante Le Mans.

There’s good reason for that oversight, because supercharged Vantage Volantes were built only to special order for a few loyal customers. Lost in the noise surrounding the Bloxham-built V12-engined DB7 Vantage, not to mention breathless news of the fabulous, thoroughly modern Vanquish, this tiny run of old-school Astons became the very last of the line – they are among the rarest in the company’s history. Just eight were built, with this car being the very last example delivered thanks to the customer’s wishes to have it built to full Le Mans specification, including all the LM coupe’s bodywork alterations and with a few additional mechanical modifications for good measure.

“With its mohair roof stowed, I have to say it looks as inviting as any car I’ve ever seen”

To be honest, I’m surprised none of the other seven customers took this route, because it looks absolutely magnificent. With its mohair roof stowed and that glorious walnut veneer, Wilton carpet and Connolly hide interior displayed in all its pomp, I have to say it looks as inviting as any car I’ve ever seen. What makes the story of this exceptional car even more satisfying is that it is still in the hands of that first owner – Paul Whight – with whom I’m standing, casting admiring glances towards this imposing machine. It’s clearly the apple of his eye, even after all these years.

‘My first car was a MkI Jaguar, which I think is where my thing for wood and leather stems from, but I’ve always been drawn to Astons,’ says Whight as he reflects on his ownership journey. ‘It was 1990 when I could finally afford to buy one – an ‘1988 Virage Volante with a 6.3-litre engine – and I’ve had a succession of road and competition Astons since, including a DB4 GT, which I should never have sold, and the AMR1 Group C car I bought from Peter Livanos and still race to this day.

‘Immediately prior to the Volante LM, I had a Vantage 550 coupe – the first Aston I bought new, actually – so I was familiar with the regular car. I dealt directly with Works on the Volante, visiting Newport Pagnell to go through all the colours and trim options [he settled on a Rolls-Royce blue with Parchment hide interior] and then discuss the various upgrades. I looked at the original invoice this morning; a grand total of £275,708.63, which is a hundred grand more than I recall. Then again, maybe I’ve confused it with the amount I told my wife I’d spent on it!

‘It took a long time to complete the car because it had to have all the bodywork changes, plus the engine upgrade to 600bhp. I also had two- stage traction control fitted and, I think most significantly, I requested the gearbox as a short-shift five-speed with a different final drive so the gearing wasn’t so tall. The cost of the transmission work alone was £38,700. Worth every penny, though, as it makes such a difference to the way the car goes.

‘I’ve never used it as a daily driver, but have taken it on some great journeys into Europe (Whight has long been a keen and active racer in modern GTs and Histories). It must have done at least three trips to the south of France, plus Spa many times and Monza over the years. I always tended to take it to race meetings at home, too. I’d regularly drive it to the Silverstone Classic, for example. I suppose you could call it a high days and holidays car, but it always got used properly.

‘Going to the South of France in it was always magic. It was really in its element on a long drive. There’s a big property conference held down there and the hotel I stayed at always loved to have the car parked out front. It’s one of those cars that attracts the right sort of attention.’

I have to confess that as a general rule I’m instinctively drawn towards coupes rather than convertibles, but there’s something about this car that’s so appealing that even I’m under it’s spell. It helps that the sun is shining, but as soon as you swing open the door and settle behind the big steering wheel, life feels very good indeed.

All that wood veneer, supple leather and back-on-white dials are very much of their time, but make a tremendous statement. The kind that new cars are somehow less adept at doing. The same goes for the powerhouse of a V8. With its pair of massive Eaton superchargers and associated pipework filling the engine bay, it looks more like a WW2 aero engine than something you’d expect to find in the nose of an aristocratic convertible.

From the moment it fires into life, the V600 literally pulses with potency, the car twisting ever so slightly on its springs when you blip the throttle. That’s what 600bhp and 600lb ft feel like when they’re straining at the leash. It’s what Aston was always so good at, and something it has made a welcome return to with the new DBS.

I won’t pretend this is anything but a brief drive, but the impression the Volante Le Mans makes is so intoxicating and unambiguous you need very little imagination to picture yourself following in Whight’s tyretracks and heading for the South of France.

The clutch is weighty, but this matches the heft of the gearshift, though it must be said that this lever slots through the gate with a deftness that belies the forces the ‘box is handling. There’s a slight delay to the throttle response, which can catch you out at lower speeds, but you soon learn to compensate to smooth your progress, and in an age when automatics and paddle-shifts are so prevalent it’s refreshing to have this tactile touchpoint with a car of the V600’s stature and performance.

I can still recall the intergalactic reach of the regular six-speed gearbox, so it’s a real surprise to feel the urgency that Whight’s five-speeder adds to the delivery. Not to the point where you lose the loping stride a car like this deserves, but enough that it feels supremely responsive and brimming with energy. It’s a car you work up and down the gearbox just for the hell of it. And when you gun it there’s no doubting that this remains a breathtakingly quick car.

The supercharged engine has always had a complex soundtrack, the slightly industrial whine of the blowers laid over the wonderfully muscular woofle of that Marek-designed 5.3-litre V8. With a vocal range that stretches from mellow to malevolent according to throttle opening, such a pure, uncontrived exhaust note underlines the sense that this car is one of the last great analogue and entirely authentic GTs.

Handling-wise, the V600 never lets you forget it’s a bulky car, but I have to say it rides better than I was expecting and displays little of the structural shimmy you might expect from an open-top car with such aged origins. The steering is light, the wheel wriggling slightly in your hands, but once you get your head around the fact that the steering doesn’t share the same hefty control weights as the clutch and gearbox you find there’s a decent sense of connection.

You need to allow for the mass and be careful in managing your throttle inputs (though you do have the reassurance of traction control), but once you get a feel for its grip levels and rate of response you can place the Volante Le Mans with confidence and drive it with verve. I can certainly see why Whight is so fond of it, as it’s a very long way from the wobbly 600bhp sun-bed my tin-top-loving prejudice led me to expect.

There’s no doubt that the V600 Volante Le Mans is something very special. There’s never been anything else quite like the twin-supercharged Vantage models, and taking the roof off only seems to have enhanced the experience, but beyond the way it drives, it’s the historical significance that ensures this car truly stands alone.

Think about it: this was the very last fully hand-built Aston to leave the Newport Pagnell factory. It’s also the very last car to be powered by Tadek Marek’s legendary V8. And, thanks to Whight’s foresight when placing his order, the only Volante with V600 engine and Le Mans bodywork. It’s a true one-off and doubtless worth an absolute fortune, though something tells me Whight’s in no hurry to sell. Can’t say I blame him.

Above and left: The way Aston interiors were 20 years ago. This car is one of only eight supercharged Vantage Volantes built by Works, and the only one with ‘Le Mans’ bodywork.