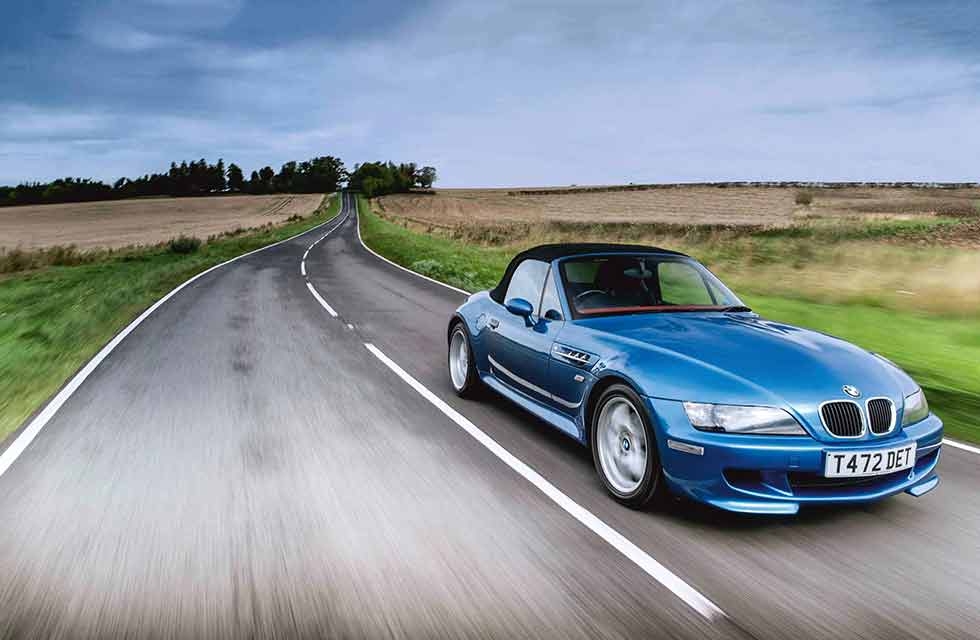 BMW Z3 M – Roadster – hero or zero. Half the price of the Coupe yet just as fast: the BMW Z3 M Roadster is an anomaly that simply can’t last. Words John Joe Vollans. Photography Adam Shorrock.

Think of BMW’s model history and you’ll no doubt be picturing one of the Munich firm’s many excellent executive saloons. With good reason, too: those four-doors have been among the most engaging and enjoyable premium driving machines ever produced.

Cast your glance a bit wider, though. In 90 years, BMW has made micro-cars and supercars and just about everything else in between. The M3s and M5s might have forged the firm’s sporting image in the modern era, but BMW never forgot its open-top roots. Right from the early days, it made convertibles and sports-cars, a fact we were reminded of with the arrival of the BMW Z1 prototype in 1985.

‘DELAY EACH CHANGE AND LET THE ENGINE DO ITS THING’

The Z3 followed in 1995, and the BMW Z8 E52 in 2000. The Z3 was such a success that it ensured a follow up in the form of the Z4 in 2002. These two models proved how important the sports car market was to BMW, especially in the USA, where they were built.

Chuck in some M-Power magic and these cars get very interesting. The Z3 M arrived as both Coupe and Roadster in 1998. Choose a roof and you’ll currently pay around £50,000: go topless and you could save yourself £20,000. That’s a lot of trips to the Nürburgring… Is the Roadster a brash pretender or a quiet prince? Let’s find out…

The retro-inspired design craze of the 1990s was ushered in by the MX-5. Suddenly, cheeky little sports cars that looked like discarded design sketches from four decades earlier were being greenlit for production. After the hedonism and bombast of the previous decade, the 1990s felt like the hangover. Inspiration for a new cultural identity came from the past, in this instance, the 1950s and 1960s.

Styled by Japanese-born designer Joji Nagashima (who also penned the E39 5 Series), the Z3 was a brilliant blend of fresh and familiar. Sporting a long one-piece bulging bonnet that tapered towards the trademark kidney grille, there was a traditional 1960s roadster vibe to it, further reinforced by the 507-aping ‘gills’ that adorned the back ends of the bonnet.

‘THANKFULLY, THE Z3’S LONG SNOUT MEANT THERE WAS PLENTY OF ROOM FOR A FEW MORE CYLINDERS’

It was certainly a striking and bold design that won many admirers. What wasn’t so well received was the lack of performance. Conceived as a direct rival to the MX-5, the Z3 sold best in frugal but underwhelming four-cylinder format. Thankfully, that long snout meant there was plenty of room for a few more cylinders.

After the Z3’s first appearance in the James Bond film Goldeneye the previous year, attendees of the 1996 Geneva Motor Show were treated to the unveilling of a very special Z3.

BMW’s M Power division had been tasked with tweaking the Z3 into the M Roadster. Visual aggression was upped with a new boot lid, deeper front and rear splitters, and revised bonnet gills and door mirrors. The M Roadster was given staggered 17-inch Style 40 alloy wheels and with that, the Z3’s image was transformed. You were unlikely to see this roadster at your local hairdressers.

The production version of the car arrived in 1998 largely unchanged. Running gear was assembled at M Power HQ in Garching, with the new Spartanburg factory in South Carolina carrying out final assembly.

Power initially came courtesy of the E36 M3 Evo’s S50 engine, a 3.2-litre making 321bhp at 7500rpm. From the end of 2000 onwards the E46 M3’s S54 was used. This more modern 24-valve, 3246cc six-cylinder engine made slightly more power at 325bhp but it delivered that peak power at a much more attainable 4900rpm. This meant you didn’t need to wring out every last rev like you did with the S50. Less entertaining? Maybe, but factoring in its rarity explains the model’s desirability today. S54 cars carry a significant price premium. The suspension designed for the M Coupe found its way into the M Roadster. These stiffer springs, Together with revised damping, improved handling over the stock Z3 roadster. With the introduction of the S54 engine came traction control as standard. All Z3 production ended in 2002 when the Z4 took over.

Values for good Z3 M Roadsters are currently fluctuating wildly. We found a high mileage (97k) but otherwise perfectly useable example on sale for just under £12k. At the opposite end of the price spectrum, you can pay over £30k for a late S54-engined example. Good Coupes are nearer £50k. The prices might be miles apart, but what about the driving experience? Let’s get the obvious stuff out of the way first. The M Roadster chassis isn’t as stiff as the Coupe – shocker.

However, the M Coupe chassis was BMW’s stiffest design to date, so it’s hardly a fair comparison. As with almost any convertible, when you lose the roof you get some scuttle shake. It actually seems more pronounced in this M model, probably because the ride is harsher than the standard Z3’s. That’s the bad news, and to be honest, if ultimate torsional rigidity is your bag, then it’s best to look elsewhere. However, if you’re after a weekend car that’s got huge reserves of performance and one of the best soundtracks out there, read on…

The softer chassis actually means very little in the real world. You can sense some flex over the worst road surfaces, but when you’re pressing on along a good B-road, or better still on an open A-road, this Roadster is mightly impressive. Grip levels are right in the Goldilocks zone. Push hard and there’s very little understeer, with oversteer only coming into play when you provoke it. There’s a compliant nature that’s surprising considering the parts-bin nature of this car’s underpinnings, but then it’s quite a parts bin being pillaged. The M Power engineers extracted the very best from the setup available.

Braking performance is progressive and strong, allowing for heavy leaning on the stoppers. The steering is exceptional. There’s a wonderfully analogue feel to this old-school hydraulic rack and pinion setup. It was great in the M3, a perfect example of ‘if it ain’t broke, don’t fix it.’ Turn in and the M Roadster responds with an immediacy that’s rarely equalled in any soft-top this side of a Lotus Elise. The weighting is perfect too.

Gear-changes are a bit on the hefty side but the throw is nice and short. Clutch operation is also a bit heavy. Not that you need to worry, as the real joy from this car comes by delaying each change and letting that party-piece engine do its thing.

The BMW S50 engine in this early car feeds on revs, making its peak 321bhp at 7500rpm, a zone most will be very happy to explore. Once it’s up to temperature, and with a suitable section of traffic-free B-road ahead, give the right pedal a heavy press and hang on. Pulling out of a well-sighted junction at near full revs in first causes the rear to break traction. Short-shifting to second pacifies it, the rear tyres chirping in protest as the M Roadster stops slithering and straightens up.

Extending second gear to the redline brings up the national speed limit. There’s just time to catch your breath. When those huge rear tyres find some grip, the M Roadster hurtles toward the horizon like a rocket sled, accompanied by the full audible majesty of one of Garching’s greatest six-cylinder engines. It’s so visceral it seems as if you can hear every valve opening and closing with each rotation of the camshafts. You don’t get that in the Coupe.

After an all-too brief time behind the wheel, we’re sold. Those bulging arches and quad exhausts promised that this Z3 would have a mean streak, and it’s a pleasure to say that it’s every bit the animal we’d hoped for.

I know convertibles have a slightly wimpy image. I’m as guilty as the next man of often overlooking them. They’re not the heroic choice for the true driving enthusiast.

However, this M-Roadster is the exception to the rule. Its thuggish looks are backed up by a soundtrack that’ll scare the neighbours on a Sunday morning. Put simply, the M Roadster is a muscle car that happens to lack a roof. If you can’t square the soft-top image in your head, you can always buy a removable hard-top. You’ll certainly be able to afford one if you choose an M Roadster over a Coupe.

As M Power machines lose cylinders with each New generation, there will come a time in the not-too-distant future when the vast appeal of an old-school, naturally aspirated BMW six-cylinder engine will become much clearer to a wider audience. With the price hikes that will inevitably follow, you’ll wish you’d bought a good M Roadster when you had the chance. That time is now.

To Centurian Automotive for the loan of its Z3M Roadster. It’s for sale at Centurianauto.co.uk

I BOUGHT ONE STACEY JEFFERIES

‘I owned a 2.2 Z3 for nearly 11 Years but after driving my partner’s M Coupe I was determined to buy a Dakar Yellow hard-top. Sadly this was out of My price range. Then I saw a Roadster in the Same colour at the right price and at the right time, so I bought it. The best thing about my Z3 M Roadster, apart from its power and handling, is that bright yellow shade. The engine is simply a masterpiece. There is a downside though, the £800 inspection II is due every four years.’

Window regulators often pack up, stopping the windows from operating, but it’s an easy if fiddly fix. Seatbelts can cause a few issues. The first and less serious is that the retaining clip on the seat breaks. The second is that the retractor won’t release the belt.

Rust is pretty common now, especially around the jacking points.

Window and roof seals Tighten over time and no longer work as they should. Listen for excessive wind noise on a road test and make sure you check the carpets for moisture.

Water pumps can fail due To worn or broken impeller blades that can crumble and partially block the cooling system, leading to overheating. Check the history for evidence of a new water-pump at the last cambelt service.

The HVAC (heater/aircon) blower resistor often fails. The give away is a blower that only works on the full (4) setting.