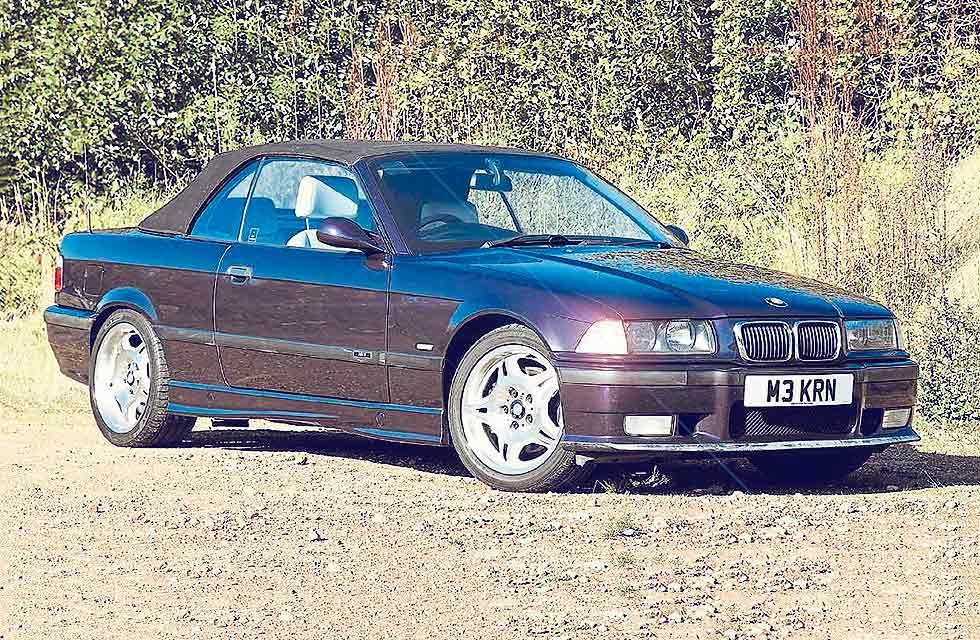 Bigger than its predecessor, the E36 3-Series was launched in 1990, featuring a number of technical improvements plus new corporate styling. First to market was the four-door saloon, soon followed by a coupé, convertible, estate (Touring) and even hatchback (Compact). Up front, there were still four and six-cylinder engines and initially the most powerful model was the 2.5-litre 325i, though from 1994 capacity and power were increased with the arrival of the 2.8-litre 328i. Front suspension was by well-located MacPherson struts and at the rear BMW added a new multi-link independent system. The revised rear suspension layout answered a dynamic flaw in the previous 3-Series, which had often been criticised for its tail-happy handling. The more powerful models were fitted with vented disc brakes all round and anti-lock braking was introduced as an update during production. The new 3 Series was an immediate sales success.

For drivers in the Eighties wanting the ultimate performance from a car that was also practical for daily use, BMW’s M-Sport division had developed an M3 version of the E30. Naturally there had to be an M3 version of the new E36, though it wasn’t launched until 1992. The M-Sport makeover included a bigger engine of 3.0-litre capacity, later developed to 3.2 litres. VANOS variable timing for inlet and exhaust valves gave a big power hike at the upper end of the rev range. This resulted in over 300bhp and a 0-60mph time below six seconds. The M3 was seriously quick and to cope with a 50 per cent more power than the 328i version, suspension was stiffened, brakes enlarged and 17-inch alloy wheels with low profile tyres gave plenty of grip. Externally a bigger front spoiler and additional badging showed the car wasn’t just an ordinary 3-Series, while inside the occupants had leather sports seats, with M-Sport badges adorning the steering wheel and gear knob. The whole package was refined but delivered a serious performance punch.

As the E36 hit classic car status, predictably the M3 was the first model to see prices heading skywards, with excellent coupés currently commanding figures above £15,000, while convertibles and saloons are a little lower.

Now I’m at Northampton classic car specialist Auto Classics to evaluate a very late E36 M3 Evolution Cabriolet, for sale at £12,995, right in the expected price bracket. Finished in Techno Violet Metallic with a Lotus White leather interior, the first impression is of a very well presented example. Registered in December 1999, this is one of the last E36 M3s and so benefits from the 3.2-litre engine, coupled to a six speed manual gearbox. Fitted with BMW’s special Evo-style five spoke 17-inch alloy wheels, it’s a desirable specification. Closer examination of the exterior shows excellent panel gaps and paint condition, with only a couple of stone chips to be seen at the front. The windscreen still bears its original airbag warning sticker in the top corner. Rust can be a problem for many E36 cars nowadays but not this one; wheel arches and underside are completely clean and free from signs of corrosion. Opening the bonnet reveals a clean engine bay complete with original factory stickers, free from fluid leaks and with oil and coolant up to their respective marks. Inside, the off white leather shows the slightest signs of wear on the driver’s seat, commensurate with the odometer reading of just over 81,000 miles. The rest of the interior is factory fresh, free from marks or signs of wear. A look at the car’s history file reveals a fully stamped up service booklet, with an ‘Inspection 2’ major service carried out 6000 miles ago. There are also many invoices and past MoT certificates included in the file.

Start the engine and it settles immediately into a smooth idle. There’s no sign of the ‘VANOS rattle’, a known problem with BMW’s variable valve timing mechanism from this era. Selecting first gear and pulling away, the highly tuned M3 engine feels as smooth and civilised as it should. Once out on the open road, the car pulls strongly through the gears, with absolutely blistering acceleration available above 3500rpm. The brakes pull the car up straight and true, giving welcome confidence with such performance on tap.

The ride is on the hard side, typical of an M3 but unlike some, this example is free from the creaks and rattles suffered by many such firmly-sprung cars. It drives exactly as a well-maintained M3 should. Overall, this M3 is fresh, it has a good history and drives perfectly. It deserves to find a new owner who appreciates such quality and originality.

Original, unmolested E36 M3s are becoming scarce now. This relatively low mileage car comes with plenty of service history and all the signs point to previous owners having cared for the car well. It’s very clean inside and out and will be serviced and MoT tested before sale giving the new owner peace of mind. Priced fairly at just under £13,000, any classic enthusiast looking for a top example of BMW’s M3 is advised to arrange a viewing.