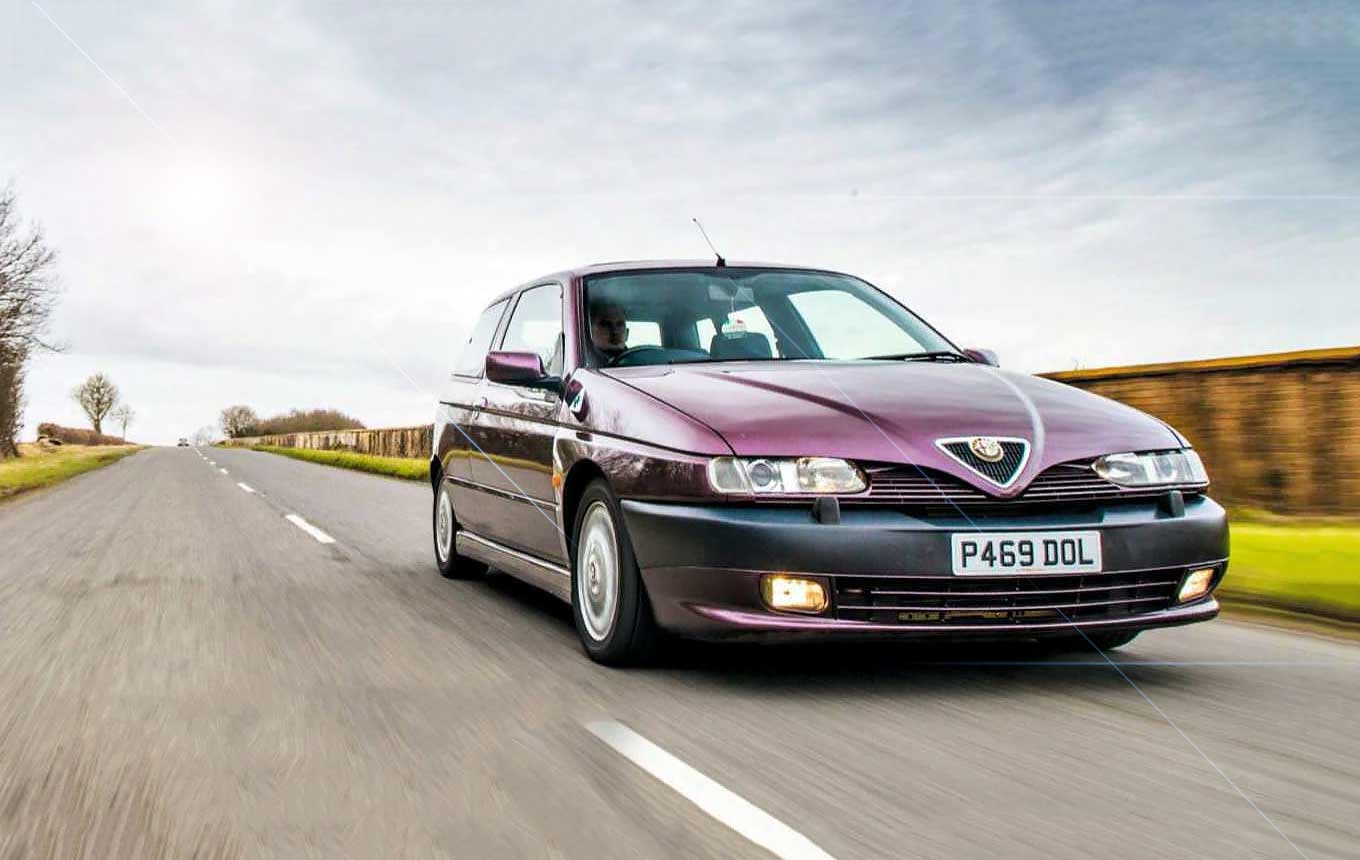 Endangered species only 94 left Purple Reign Strange yet beautiful: why the Alfa 145 Cloverleaf needs saving. It took awhile for Alfa Romeo to get the peculiarly-shaped 145 right. Eventually, they managed it – so it’s a shame that so few remain. Here’s why we should save them. Words Nathan Chadwick. Photography Adam Shorrock.

Alfa Romeo 145 Cloverleaf  As fun to drive as it is odd to look at, the 145 Cloverleaf is an Endangered Species that needs saving. Nathan tells us why you should adopt one.

Think back to the early 1990s, when the arena of family transport was a dark and dismal place. The Ford Escort MkV was about as appealing as a bout of MRSA, Rover’s 200 was only great if you listened to BBC Radio 3, and the Volkswagen Golf MkIII waszzzz… ah sorry, drifted off there. Where were we? Ah yes, 1994. Alfa Romeo had finally replaced its 33 with the 145. And what a statement it was – angular, tall, challenging, downright ugly to many, absolutely intriguing to others. To look at, at any rate. The unseen stuff had a murkier provenance. The 145 was built on the relatively fresh Fiat Tipo platform, but its first engines were hoicked from the 33, which of course got its engines from the ancient Sud.

That Boxer engine was great in the 1970s, but by the early 1990s it was about as on the ball as a drunk prostate surgeon. Three years later, the 145 got the 155’s Twin Spark engines. They gave it the zest the styling and the badge demanded. Better still was to come in 1998, with the new 2.0-litre Twin Spark from the recently-launched 156. We’ve got one of those 145s to play with today.

Sadly, the effects of time, neglect, crashes and scrap-page have cut 145 Cloverleaf numbers down to just 94. Just 162 examples of the entire 145 breed remain taxed in the UK. Sad for any car, but we say that the 145 is especially deserving of preservation.

Why, you may ask. After all, even though it was released towards the end of Alfa’s awkward styling phase, it still gets more than its fair share of name-calling for being ugly. It wasn’t even really an Alfa to begin with. Though Walter de Silva and Andreas Zapatinas often get the ‘credit’ for the 145, it was largely designed by Chris Bangle – he who penned such icons of otherness as the Fiat Coupe and the controversial versions of the BMW 7 and 5 Series. It was meant to be a four-door Lancia Delta replacement, until a senior management sort wandered past the design studio. Asked what the sketch was, Bangle’s boss said it was the designer’s latest creation heading for the wind tunnel. ‘Looks like an Alfa,’ said the management type, to which Bangle’s boss replied ‘Er… yes it is!’. And lo, the Alfa Romeo 145 was born.

De Silva and Bangle adapted the design into something that’s more striking than pretty. But, much like the similarly challenging Alfa Romeo 75, it’s brimming with curious details. You sit high. Though that’s a trait Shared with the Fiat Tipo, with which The Alfa shares its chassis and wrap around windscreen, you feel it more here thanks to the slice-down window apertures. It’s roomy, though – there’s plenty of space for arms, legs and big feet. The pedals are well-spaced, the seats comfy and the driving position excellent – novel for an Alfa back then.

The dashboard is initially less pleasing. When the Twin Spark engines arrived, Euro customers got a refreshed, prettier dash, but Brits had to soldier on with the old one. It’s from the 1980s CAD school of right angles, Tonka Toy interfaces and slab sides. Today, it has a pleasing retro charm. The engine has more than that.

Some prefer the Boxer flat-four in the 145, but the Twin Spark is a better bet. A 21bhp bump over the old 1.7 16v Boxer may not sound like much, but you’ll kiss 60mph goodbye in around eight seconds, shaving more than a second off the old Boxer’s time. It feels quicker than that, too: at 4000rpmit turns from shopping car appliance to direct-injection adrenaline device. There’s surprisingly good low-down torque, but you’d best be ready with the gearshift in the lower ratios, so suddenly does it munch through revs. You need to be prepared in other ways too. The body roll is fairly epic, there’s a big helping of torque steer in first and second, and the brakes are grabbier than an Italian teenager among a coachload of female British exchange students.

Much like the ebullient Fiat Tipo Sedicivalvole which we featured last year, the 145 Cloverleaf is an antidote to sanitised modern motoring. There’s a blissful mechanical engagement about it. There’s little lateral support from the seats, but it all feels as if you’re part of the action. If you love wrestling with a machine to get the best out of it, you’ll absolutely love it. That’s not to say it’s a mess in the corners. Far from it: turn-in is sharp. But it’s also true that there’s a little uncertainty around the centre. It’s an often-heard criticism of most Italian cars – usually by car hacks with Stuttgart or Munich tattooed on their foreheads. But if you burst through this ‘soft’ phase, and go harder, faster – basically, drive like an Italian – then the 145 will reward you by loading your hands and backside with exquisite road surface detail, encouraging you to push on further.

There’s decent grip on the limit, Though with an open diff you’re always going to run out of road if you do come over a bit silly. The rear can be a little lively; that’s mainly down to the fact that the 145 didn’t get the multi-link rear suspension the similar GTV had. Instead, it has trailing arms. Even so, it’s still plenty pliable enough for mid-corner adjustments.

Standing way above all of these handling considerations, however, is the sound it makes. That minimalist interior does nothing to drown out the soaring, sonorous roar of the Twin Spark. It sounds angry, aggressive, fighty. The engine dominates the car, and – given the way it torque-steers – the chassis in particular. For many, that might be seen as a negative, especially if you prefer your cars to be more neutral. If that’s the case, buy a Golf. Do remember to pack the Red Bull, though; you’ll need it.

The 145 is the opposite – it’s fizzing with excitement and energy. You have to be awake, you have to understand it, you have to engage with the job of driving to get the best out of it. Above all, you have to, er, drive it – and drive it hard. And isn’t that what the most enjoyable hot hatches are all about?

So, you’ve got this far. The Alfa sounds deliriously appealing, no? There is a problem, though. Mention late 1990s hot hatchbacks and there’s just one car that seems to pique the interest of petrolheads – the Peugeot 306 GTI-6. It’s easy to understand why –it’s faster, its Pininfarina-styled lines are prettier, it’s much more polished and it has an extra gear ratio. The Pug really did move the game forwards. So why should you care about the Alfa?

Because the Alfa Romeo 145 Cloverleaf provides a totally analogue experience. There are few aids to help you, other than power steering and ABS. There’s not much to shield you From a crash, either. Indeed, if you get energetic in the corners you’ll find the plastic interior door panels have an oddly cushion-like functionality.

But you’ll look past that. The 145 provides heart-in-your-mouth excitement and that raw, serrated feeling that just makes you want to drive it harder and harder. Just like a proper Italian hatchback, then. But there’s so much more to love – the sharp steering, the way this thing girds its budgie smugglers and enthusiastically hurtles you towards the next corner. Sadly, this wasn’t enough to save the vast majority of 145 Cloverleafs; scrap page schemes and neglect have killed many, limiting the choice to £500 bangers.

But times are changing. People are waking up to the 145’s charms, and to their rarity. A good one starts at £2500, but the best could cost you twice that – and with so few cars left, those money numbers will only grow. Some might see that as mad, but this car has a manic quality that’s utterly addictive. Now’s the time to seek out that fix.

THANKS TO Antonio Damiano from Autosportivo for the loan of the car.

‘STYLING IS STRAIGHT FROM THE 1980S SCHOOL OF RIGHT ANGLES, TONKA TOYS, AND SLAB SIDES’

I BOUGHT ONE CHRIS THOMAS

Chris Thomas is on his third 145, and his second Cloverleaf. ‘I had one as my first car in the early 2000s, a 1.6-litre Junior that has Cloverleaf looks but not the go. Eventually I got a company car and it had to go, but I always promised myself another.

My first Cloverleaf was a bit of a dud – Twin Sparks need oil and the previous owner hadn’t bothered, so it never ran right. I bought my keeper – a late-model car with body-coloured bumpers – in 2015. I love the peculiar looks and the way it seems to like being driven hard. Like a lot of Alfas of this era, they benefit from a bit of tinkering, so I’ve fitted Koni suspension, a K&N filter and black five-spoke Speedline alloys, which look great against the red paintwork. It’s cheap to run and there are plenty of specialists to help.’