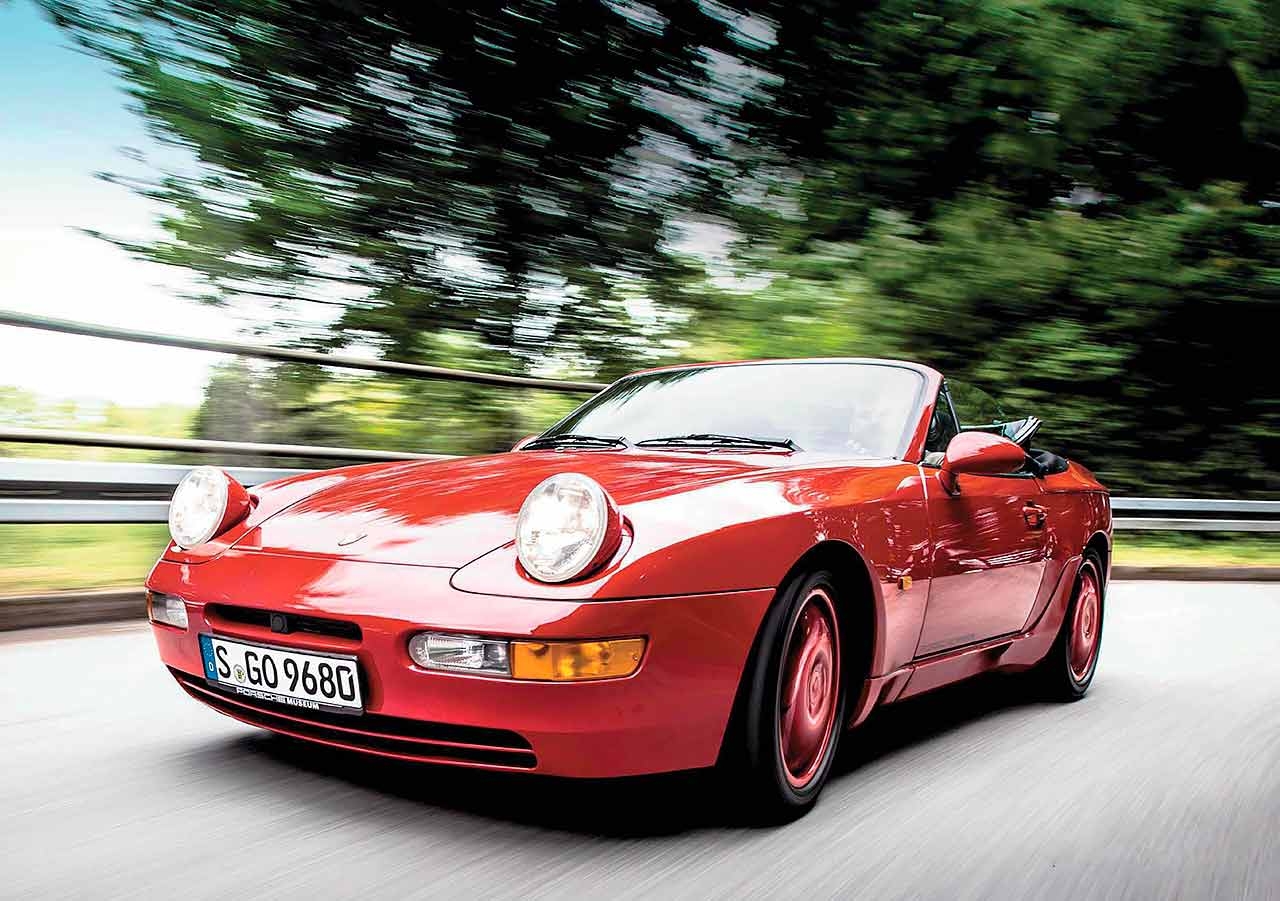 The Porsche that never was. The Club Sport Roadster was an ailing Porsche’s response to the burgeoning Nineties roadster market. We drive this missing link between 968 and Boxster, and meet its creator. Words Sam Dawson. Photography Porsche.

DRIVING THE 968 CLUB SPORT CABRIO PORSCHE SHOULD HAVE BUILT

The Porsche that never was Before it was saved by the Boxster, one route Porsche explored was a drop-top for driving purists – the stillborn Porsche 968 Club Sport Roadster. We go for a rare drive in one of the museum’s prototypes.

I’ve barely travelled a mile, yet everything about this car screams ‘niche’, a nuttermobile for Nineties track-day enthusiasts in the TVR mould. Porsche’s big four-cylinder is usually a bit underwhelming in normally-aspirated form, emitting a wet fizz and settling down to a whisper at motorway cruising speed. This one’s different – there’s a bark to it when it pulls away from the lights and it booms on downchanges. It’s obviously still a four-cylinder, but it’s exciting in a modern hyper-hatch sort of way, a combination of induction scream and thumping bassline beyond 3000rpm that sounds like the street outside a nightclub at 1am.

In a world where Porsche is the world’s most profitable car company and mass-produces family five-doors alongside its sports cars, it’s hard to believe there was ever a time when it stared death in the face. But it did. And the car in which I’m blasting out of Stuttgart is part of Porsche’s transition from doldrums to buoyancy. It may look like a dubiously-modified 968 Cabriolet owned by someone with a penchant for bright red, but in fact it was a test mule. As revealed by an equally vivid, more original-looking blue creation hidden until recently in the Porsche museum’s storage facility, it was all part of a plan to make the marque popular – and profitable – again.

Cast your mind back to the early Nineties. The preceding decade had been Porsche’s to own, with astonishing racetrack dominance, starring roles in Hollywood movies – to the point where Tom Cruise quoted its advertising slogans in Risky Business – and a reputation as the default status-symbol for those who had made a few quid. But therein lay its problem.

An almighty bust had followed the Eighties economic boom, leading to rampant unemployment, and suddenly promenading around in a white whale-tailed 911 Cabriolet seemed deeply distasteful. There was another problem too, in the modest form of the Mazda MX-5. While the thrusting Eighties had been characterised by ever-escalating power outputs and aggressive styling, the Japanese manufacturer had put simple, unpretentious fun back on the menu. If the ethos of the Nineties was going to be cheap, its salvation was that it would be cheerful too. Despite already hobbling, Porsche’s response was to shoot itself in its remaining good foot. Because ironically, despite the 911 and 928 being the default Eighties success purchases, they had made very little money for Porsche. The 911 was a handbuilt car, labourintensive and unprofitable, and its evolution into the modern 964 had cost the company a fortune. And the 928 had never sold in the numbers Porsche envisioned and represented an expensive burden kept alive by serial buyers.

Porsche’s only source of profit in the Eighties had been the 944, but by the early Nineties its styling was two decades old. In 1991 Porsche evolved it into the 968 with 928-derived styling cues. However, the price ended up at DM100,000 (approx £34,500) – over a third more expensive than the 944 and a psychological barrier beyond which German buyers wanted at least six cylinders.

Offering a stripped-out Club Sport version for DM77,800 (£26,900) helped arrest plummeting sales and focused buyers’ minds on the transaxle chassis’ brilliant handling. This gave chief designer Harm Lagaay an idea – what if the Club Sport concept could be evolved further as a roadster, stripped down even more along the lines of the 356 Speedster of the Fifties? A plan was hatched to develop a car for the 1993 Detroit Auto Show.

The reason that the car I’m driving now looks all-but indistinguishable from an ordinary 968 Cabriolet is because the design process for the Detroit car took just two weeks. While stylist Matthias Kulla created the bodywork, Porsche’s engineers separately took a 968 Cabriolet and created this lowered, stiffened mechanical basis, using Club Sport parts, to wrap it around.

It looks and feels lairier than any 968 coupé. All that high-contrast red and black on the 10mm-lowered silhouette makes it feel more like an early-Nineties Marcos than a Porsche. It’s difficult to get in and out of too, but once you’re in you feel clamped in place before you’ve even done up your seatbelt. Bumping over Stuttgart’s countersunk tramlines, it feels hard under the backside but supportive, and the driving position is perfect – legs straight out, arms slightly bent and great visibility with the roof down. Although it was a carry-over from the 944 – surprising for a luxury-priced cabriolet – it feels as though the Club Sport ethos was extended to the roof. You have to use an Allen key to unscrew the windscreen header rail clamps. It’s a world away from the electric soft-top found on nearly every convertible since the 2000s and you can’t put it up or down in a hurry.

Into a quaint, typically Rhineland village, I hit a pothole and a harshness makes itself felt. Obviously conscious of the challenge of avoiding scuttle-shake and chassis flex in a soft-top structure, Porsche’s engineers stiffened the 968 Cabriolet structure to the point of obsession. The result is a persistent jiggle from the rear whenever the road surface is anything less than totally smooth. Couple this to the fact that the 2.2-turn lock-to-lock, barely-assisted steering is beyond talkative, and the car becomes quite irritating in stop-start suburban traffic, every jar and ripple amplified and zapped up your arms and back like electric shocks.

Throw the vicious clutch into the equation and you find yourself leaving a substantial gap between the Lamborghini Miura-style tilt-forward headlights and the car in front. It’s as stiff and violent in its action, leading to a few scrappy getaways. That could be down to how little the car has been exercised over the past two decades, but it’s a sharp reminder that you’re in a serious sports car with racetrack ambitions.

But get it onto a fast piece of rural tarmac and it all makes sense. The heavily-sprung pedals help meter your enthusiasm as the elastic power of the VarioCam engine hurls the car towards the vanishing point. With the road ironed out, the transaxle-assisted 50/50 weight distribution of the chassis makes the car feel as neatly balanced as a Lotus Elan mid-corner, and the quick steering means you flex it in and out of bends with your biceps, the design of the wheel perfectly judged for keeping your hands at quarter-to-three. Then, just as I build up the revs, excessive scuttleshake shudders up unexpectedly at around 60mph.

It’s not helped by stiff spring and damper rates that exacerbate matters, sending a violent jarring motion through the steering wheel and seat base. You realise how much you’re being shaken when you go for a gearchange – usually so slick in a 968 – and it buzzes like a fork jabbed in a live toaster. However, it’s important to remember this car’s test mule status. It was economic rather than engineering factors that led to the Club Sport Roadster’s premature demise, but its market appeal would have been limited compared to the Boxster that saved Porsche’s bacon in 1996. I emerge from this engineering exercise looking for bruises and mildly concerned about internal haemorrhaging. It’s an incredibly physical car you have to wrestle with but, unlike cars such as TVRs and Big Healeys, it fights back all the time, draining you before you can enjoy it. It won’t even cruise comfortably at 70mph because the VarioCam valve-timing constantly urges you to press on in search of a speed where the dashboard will stop rattling and the gear whine will subside.

That said, in some ways it’s unfortunate that Porsche never built the Club Sport Roadster, because despite all its foibles it would have had a market – albeit a small one – in the Nineties. The 986 Boxster that emerged in its place is a beautifully balanced thing, and user-friendly to a fault. And while this brought the sales that Porsche badly needed, it also invited detractors who typically owned TVRs or highly-tuned Japanese drift-monsters.

It’s easy to find fault with the Club Sport Roadster but it’s difficult to sneer at it too. Its hyperactive-puppy attitude and torture-chamber harshness would have gone down well with self-proclaimed headcases who bragged about powersliding their way down Snake Pass or cracking 150mph at Bruntingthorpe in the Nineties. Porsche wouldn’t have sold many, but the Roadster might have changed its reputation – and in the aftermath of the Eighties isn’t that precisely what the marque wanted?

‘The 968 Roadster was one of my first renderings as a professional designer,’ said Matthias Kulla as he recalls the rush to design a concept car that ultimately the public never saw.

‘Harm Lagaay wanted the Roadster’s styling to be about making the 968 more emotionally appealing. We cut the existing 968 Cabriolet up, hot rod style, giving it a lowered roofline with a low-line hardtop and reprofiled soft-top. The 944-derived wheelarch extensions had to go – they were too square for the rest of the car, so we cut them away, and the front end was modified with fixed headlights to give it a more traditional Porsche identity.

‘The interior was designed for light weight, hence the bare metal, and we did away with the spare wheel in the name of weight reduction too. ‘It ended up being a very “quick and dirty” process. In the space of two weeks my sketches were turned into a full-sized model by Peter Muller, then sent to ASC (American Sunroof Company) in Detroit, where they had the people, capacity and expertise to turn it into a concept car in time for the show.

‘In the end it wasn’t even shown to the public. Porsche had second thoughts. It wasn’t known for creating annual show cars so this, coupled with the economic crisis, made us realise that if we did a concept car it had to be a completely new and spectacular concept, not an evolution of the 968. It was at that moment that the design process for the Boxster began.

‘It’s funny though – I haven’t seen this car in 20 years and nowadays my favourite Porsche design is the 944. I like it for its difference, the only Porsche to be hard-edged and angular rather than soft. I now have a Jensen Interceptor, and its side and rear profiles are near-identical to the 924 – uncanny.’