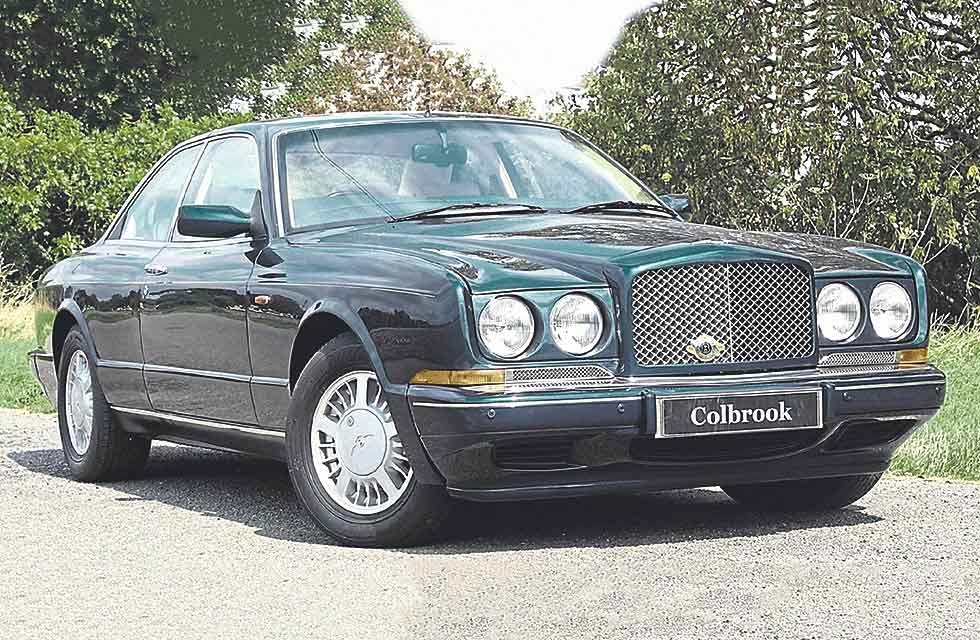 The decade-long revival of the Bentley marque, begun when Vickers took over Rolls-Royce in 1980, arguably reached its conclusion at the 1991 Geneva Motor Show with the unveiling of the Continental R. This brought back a once-famous Bentley name from the 1950s and 1960s and, after three decades of badge-engineering, was the first Bentley model in the long time to be unique to the Flying-B.

Its name and appearance suggested that it was ‘merely’ a coupe version of the Turbo R saloon, and indeed the platform and virtually all the mechanical parts were the same. But the Continental had bespoke bodywork and a different interior, all assembled, finished, trimmed and painted by Crewe’s in-house coachbuilder, Mulliner Park Ward. Not a single body panel was shared with the Turbo R. The roof line was an inch lower and the windscreen was more raked. The familiar 6.75-litre V8 (with turbocharger) churned out well over 300bhp (Crewe still declined to release proper power ratings), enough to take the big two-door to 145mph and to deliver supercar-rivalling acceleration.

Just as the classic Continentals had different gearboxes and final drives to the standard models, so the new became the first Crewe car with an automatic transmission to have its gear selector on the centre console rather than the steering column, and the gearbox boasted a Sports mode for the first time. The Continental R was the world’s most expensive car, costing £175,000 when it was new (three times the average house price in 1991).

By that metric the 1993 model currently on sale at Colbrooks is an absolute bargain. In every sense you are getting a huge amount of car for the money. The previous owner had the car since 2010 and long ownership spells are a good sign with any car, especially complex and sometimes demanding ones like these. An even better sign is 14 service stamps in the book – one for every 3500 miles – of which half are from Colbrooks.

Unsurprisingly this Continental is in excellent condition, be it the Royal Blue paintwork or the Magnolia hide interior. The car sits on its original 16-inch wheels, which are free of knicks or corrosion. There are the tiniest areas of electrolytic corrosion around the door locks but none around the handles or badges, and no sign of any rust behind the front bumper, the sills or the wheel arches – all classic trouble spots for a 25-year old Continental R. A few pixels have died in the little electronic display sitting incongruously between the analogue speedometer and tachometer but all of the multitude of gadgets – climate control, electric seats, seat heaters, seat memory, windows, and cruise control – work properly. So does the electric mechanism to unlock and recline the front seats to allow access to the back, which is an expensive fix if it has broken.

A test drive of a few miles on country lanes is hardly the best proving ground for a car designed to cross continents at average speeds approaching triple figures. The big whisper-quiet V8 was so undertaxed that the oil temperature gauge barely moved off its bottom stop. All the other gauges showed the correct readings. The combination of an automatic gearbox so suave that its changes are almost imperceptible, and about 500lb ft. of torque, means that you barely have to stretch the V8 above a brisk idle when pottering about, let alone explore anywhere near its 4500rpm redline (a trait which hints at how long ago it was since the mechanical bits left the drawing board). But it did show the Continental’s ride to be as it should be – a little tight, maybe even choppy, at low speeds but never brash or jarring, which shows the springs and the hydraulic self-levelling system to be in good shape. Neither was there any noise from worn bushes or creaking dampers. Above 40mph or so the ride resolved into the unruffled, all-conquering quality you’d expect.

The sloping coupe pillars do make reversing and parking tricky but this car has aftermarket rear parking sensors which work very well to take care of that problem. Otherwise the good body control and well-judged and powerful controls (especially the mighty and responsive brakes) make it no harder to drive than an ordinary saloon.

There was one stretch of road where it was possible to briefly give the Continental R some free rein. Under full throttle the gearbox down-shifted quickly and the engine pulled from 1000 to 3500rpm in a manner that seemed truly effortless and which also proved there were no problems with the turbo or fuel injection system. The 2.5-ton heft and opulent refinement of the Bentley means that its fearsome accelerative abilities don’t really make it through to your senses in the cabin. The only indication is how quickly the slim needle of the speedometer is sweeping around its face. But even a Continental, the most sporting of the Bentleys, is more about having huge power in reserve in case there’s a mountain range or other inconvenient geographical feature between you and some sun-kissed foreign coast 1000 miles away rather than thrilling driving experiences.

Any Bentley feels special and a Continental R is special even by Bentley standards. It makes a case for itself on the grounds of style, presence, luxury, performance or provenance or a combination of all of those. Early examples like this, especially when in such good condition and with such a reassuring history, offer fantastic value money and prices are almost certainly not going to get any lower. While it is always a shame to look on a classic car purely as an investment, that’s exactly what this Continental is. But it would also be a brilliant car just to own and drive as it was supposed to be.