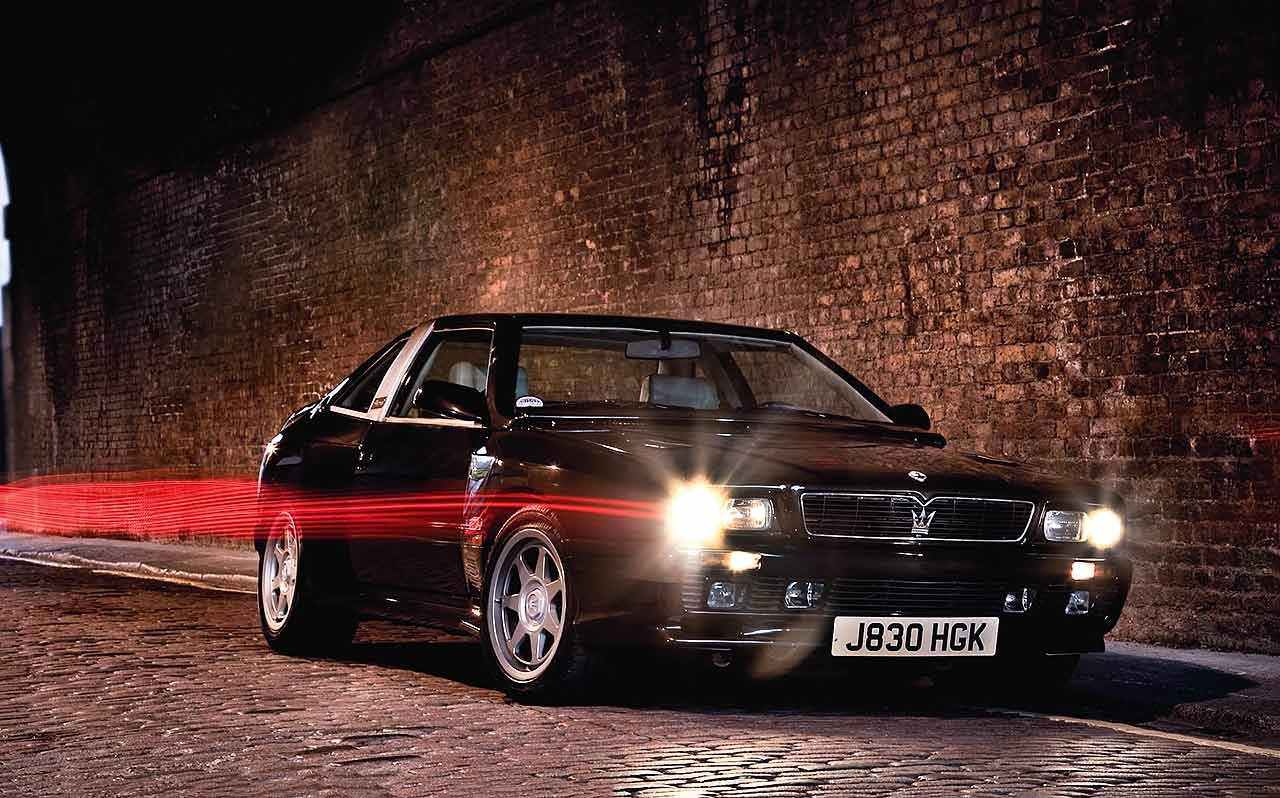 Traffic is pretty thin just now, and I linger at the roundabout, giving the cars ahead ample opportunity to get across the hill on the other side and well away and gone. I’ve driven several Maserati Biturbo derivatives and loved them all. Even though I’m fairly green with this V8 version, I’m quite adequately pre-qualified to have a serious go, and I want plenty of boogie room for it. Still, I launch slowly, triple-checking in every direction, and once lined up straight and clear with the exit, short-shift to second, roll firmly on the throttle and wait for that lovely, familiar Biturbo surge as the boost comes in.

Except this time the boost comes in like a sex-crazed T Rex through a phone-box door and never lets up from there: slammed back into the seat cushions till the needle hits the redline, shift and do it again, whoosh and growl and whistle and chirp and shift, and at the hilltop the edges of the tarmac are already squeezing me into a breath-suckingly narrow tunnel of onrushing landscape.

Then, with the power cranked to max insanity and my brain starting to melt like an overloaded circuitbreaker, the highway swoops unexpectedly to the right. Suddenly the big, fat, beefy rear tyres, still clawing ravenously for forward thrust, feel about the width of tricycle rubber and, while the car tip-toe dances into the corner on that needlepoint where I don’t dare push any harder or any softer, the car seems to sneer: ‘Yeah, you want to play? Come on, let’s play…’

Make no mistake about it, this is not just another Biturbo clone. The Shamal takes its cousin Biturbo as the jumping-off point, but the leap from there is a 50-storey cliff-face. Granted, every one of the many V6 variations on the Biturbo theme is a true thrill ride, with urgent, pulse- quickening, sometimes downright eye-watering acceleration, combined with the stately creature comforts of Kubla Khan’s fabled decree.

The V8 Shamal, though, stands at the top of the genetic heap; it’s a luxury-wrapped Hammer of the Gods, Thor in a designer tuxedo, and that this one comes to us in the signature colours of Darth Vader is surely no coincidence. It’s one of the last great Italian masterpieces of the era before computer tech made hero drivers of us all. It just might also be one of the collector market’s great un-noticed sleepers.

Not that the man who originated the project had a future collector market in mind. Industrialist Alejandro de Tomaso, Italian-descended and domiciled former racing driver of Argentine birth, was actually inclined to convert faded grandee Maserati into a mass-market manufacturer of medium-priced sports saloons. When he bought the company in 1975 with a token pittance and some Italian Government leverage from its lopsided ‘merger’ with Citroën, itself wobbling on the ropes at that point, Maserati was more of an idea than a genuine automaker. Maserati had produced some fascinating cars under French control, most notably the wonderful Khamsin coupe, but not many and not for any profit.

De Tomaso believed the answer could be something similar to the hugely successful BMW 3-series, but with a dash of Italian style, and a considerably smaller one of German spartan, and at a price point and production level that would generate economies of scale. Some say, too, a little nudge from his political partners may have influenced the reasoning: tiny workshops hand-crafting a trickle of exotics don’t impress voters nearly as well as bustling car plants crammed with well-paid assembly line jobs.

Whatever the ultimate reasons, the design that appeared in December 1981 was a rather conventional front-engined, rear-drive, two-door, three-box configuration, drawn by de Tomaso staffer Pierangelo Andreani (who also styled for de Tomaso’s Benelli and Moto Guzzi subsidiaries) along very obvious but elegant 320i lines. It retailed in the upwardly mobile young professional BMW price range.

Maserati’s offering, however, had a few things that set it apart from the German competition. Its leather, wood and suede interior made a Rolls-Royce look like a dentist’s office; it had an overhead-cam V6 in place of a straining four- banger; most proudly, it was the very first dual- turbocharged engine to grace a series-built road car. Consequently, naming it the ‘Biturbo’ must have seemed a no-brainer. Sales were initially quite strong, too, especially of the home-market 2.0-litre edition, produced in view of Italy’s swingeing displacement-based purchase taxes, and the always crucial American market took to the 2.5 export model rather encouragingly.

Unfortunately, the rose was soon considerably less glowing. Reliability problems were rampant, thanks in part to the early use of a Weber carb with the turbocharging (lovely noise, lousy engineering), and, of course, Italian build quality was at a nadir that haunts its reputation to this day. The Biturbo that I personally very nearly bought, for example, had I not overcome my wanton lust long enough to peek at the underside first, came very thoughtfully supplied straight from the factory with rust in the wheelwells.

Nonetheless, the Biturbo concept was sound, and things did improve, and although it never became the Bimmer-beater de Tomaso had hoped for, it kept the company afloat. The basic platform furthermore morphed into a vast assortment of model specs and designations, over 50 of them: there were four-doors and convertibles, export and domestic, long, short, and very short wheelbases; the engine grew to a 2.8, acquired fuel injection and intercoolers, and the name changed more often than a bad cheque artist on the lam from the FBI. Good luck remembering your Karif from your 430 from your 2.24v without a scorecard.

The name you definitely will remember, however, once you’ve been anywhere near the issue, is Shamal. Etymologically speaking, it’s only another instance of the Maser tradition of ‘mighty wind’ car titles, like Mistral or Bora or, yes, Karif. From every other standpoint, however, the Shamal is a Maserati of its own unique personality and flavour.

Unveiled in 1989, it was aimed infinitely beyond the 3-series customer, and marked a return to the engine architecture that had defined so many of Maserati’s post-war stand-outs, from the racing 450S through the Ghibli and the Khamsin: a quad-cam 90-degree all-alloy V8. But unlike the Biturbo V6, which had roots in the Citroën SM unit, the Shamal V8 shared nothing with any predecessor beyond a few minor details and ancillaries. With a 3.2-litre displacement, four valves per cylinder, Weber-Marelli electronic injection and ignition, air-to-air intercoolers and twin water-cooled IHI turbos, it made 326bhp and, equally important, 320lb ft of torque, and at only 2800rpm.

It was the first Maser equipped with a Getrag gearbox, a six-speed in place of the Biturbo’s ZF five-speed. The Shamal retained the Biturbo’s torque-sensing limited-slip diff, power rack-and- pinion steering and strut-type suspension essentials, but with Koni-developed electronic active damping and four firmness pre-sets, as well as the full luxo cabin with auto climate control and more. That year’s 3.3-litre Porsche 911 Turbo, in comparison, made roughly 40 notches less in horses and torque, had only just sprouted a fifth gear, and, as I recall, the closest it came to luxury was a cigarette lighter.

And man-oh-man did the Shamal look bad. To the bone. The restyling was handled by the undisputed world champion of bad, Marcello Gandini, he of the Countach and Bugatti EB110 and Stratos, and the first thing he did was strike the word ‘understated’ from Maserati’s dictionary. He bulged out the wings all around, slapped on spats and spoilers, including one along the windscreen base, in theory to aid wiper performance but mostly, one suspects, simply because he could. Then he draped a targa/ rollover bar across the roof, a trendy matt anthracite one, regardless of body colour, nipped and tucked the corners, sexed-up the rump, and reshaped the rear wheelarches with his trademark slash. This might also, by the way, be the only car ever made with more brand badges and logos than the Veyron, but you probably can’t blame that on Gandini.

The effect is of a grown-up Delta Integrale Evo with a good tailor and gym membership. Unlike the Integrale, however, or the Porsche, or most other turbo-screamers of the period, the Shamal doesn’t need much in the way of revolutions to provide entertainment. Two small turbochargers really do spin up faster than a single large one, and more progressively to boot, and a 3.2-litre V8 in a 3000lb car wouldn’t be too shabby with no boost at all. You can feel things starting to happen as low as 2000rpm; by 3000 you’d better have your undivided attention focused in front, and at 4000 it’s in full-on rampage mode.

Rampage mode is an eye-opener, too; 300-odd horsepower without traction or stability controls makes 500 horses with them seem almost simple, and far more so since Maserati chose to put this 300-odd on that shortest of their short wheelbases. The active suspension seems to have improved on the Biturbo’s often lurid tail-wagging, as well as sharpening the steering turn-in appreciably, and the superb control positioning and firm, responsive non-ABS brakes beg for hard motoring. Still, if the old adage is true about Ferraris being for footballers and film stars and Maseratis being for gentlemen, then the Shamal is a Maserati for gentlemen who know what the hell they’re doing.

But that’s a major part of the car’s attraction: it’s modern in its comforts and conveniences and space-warp speed, but not so modern as to drive itself. Add in the fact that only 369 were made during the seven-year run, the magic names of Maserati and Gandini are both attached, it’s the last of the great line of Maser V8s to be created before Fiat arrived, and it definitely doesn’t look as though it’s a Maserati by way of Ferrari, then you can understand why collectors are finally beginning to notice that the Shamal, long unjustly painted with the same tarry brush as the early Biturbos, is genuinely something special.

Confidentially, I wouldn’t take that wager if I were you. I’ve never known the man to be wrong yet.

Above and below Basic Biturbo shape was looking a bit dated by 1989, so supercar stylist Marcello Gandini moved it on for the Shamal; interior is sumptuous, engine a twin-turbo V8 with 326bhp. Above Slashed rear wheelarches are a Gandini trademark; ‘targa bar’ over roof suggests a removable panel, but the Shamal is a regular hardtop.