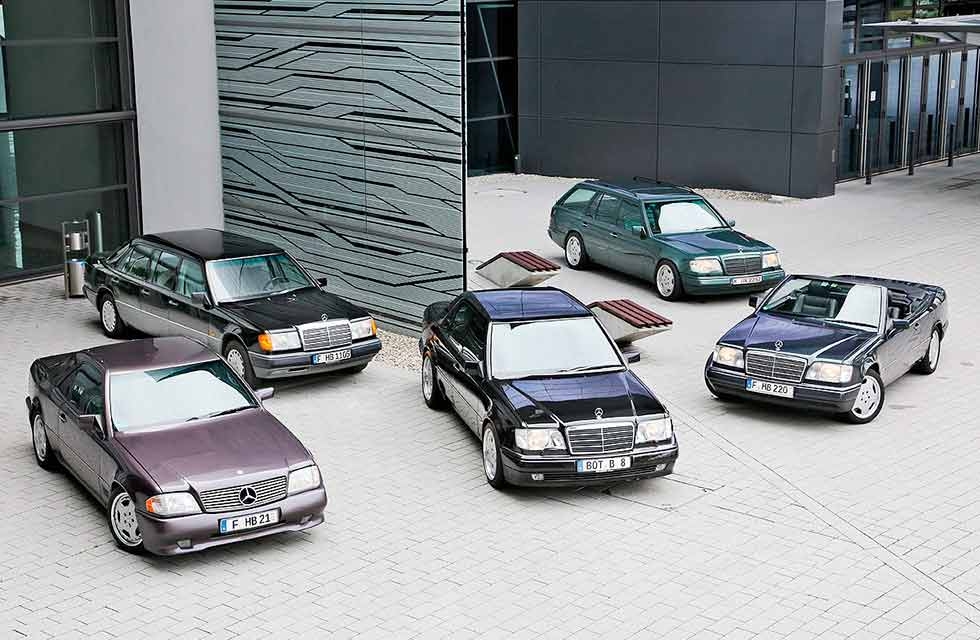 The W124s you need to know about. Reimagining an everyday hero. Five fruity flavours of a firm favourite. This quintet of unusual W124s may have roots in familiar territory, but each car offers something different to the norm. Words Dan Furr. Photography Angelika Emmerling.

With close to twenty different engine variants, four different gearboxes, every body shape you care to think of and a choice between rear-wheel drive and four-wheel drive configurations, the W124 holds status as one of the most diverse cars ever offered by Mercedes. Being all things to all people, however, can be a double-edged sword. After all, the runaway success of the W123’s successor resulted in such high-volume production that spotting a W124 in the wild today isn’t exactly anything to shout about.

In this regard, the W124 is the victim of its own success. Needless to say, in order to catch the eye, an example of the model needs to be something special, which is why we popped back to Mercedes’ motherland to take a look at a selection of astonishing cars catering for those who want their treasured four-wheelers to stand out in a crowded parking lot. From mild to wild, here are the W124s you need to know about.

If you were a buyer looking for a Mercedes on behalf of the Anthill Mob, then the W124 limousine (V124, if you’re being picky) would have featured high on your hit list. The bulky six-door measures more than five and a half metres in length and offers comfort coupled with no-nonsense executive functionality.

Practical details include power steering, air-conditioning, electric everything and self-levelling suspension. Performance was hardly paramount in the minds of prospective purchasers, which is why Mercedes saw fit to install its smallest six-cylinder engines (initially a 2.6-litre M103 unit before increasing displacement with a switch to the 2.8-litre M104) or the option of a 2.5-litre diesel, affording the stretched stunner enough torque to pull its many passengers and their briefcases without ever feeling sluggish.

2,342 W124 limos were produced between 1990 and 1994. The vast majority of those sold were the 260E variant built during the first two years of production. The example featured here has covered 140k miles thanks to a busy life providing service to dignitaries working at Germany’s Federal Foreign Office. It’s a brilliantly built machine offering passengers in the third row the feeling they’re a VIP heading to an event where they’ll be welcomed as guest of honour. How easy it is to park the large barge outside the destination venue is another story.

Despite a mind-boggling number of W124s to choose from, a big-power wagon was missing from the factory line-up. You’d need to jump forward to the W210 before being able to get your hands on an eight-cylinder cargo carrier from your local main dealer, but what if your heart was set on a W124 estate and you exhibited a strong distaste for rear tyres? AMG (then yet to be assimilated into manufacturer operations) had you covered with the option of its E36 load lugger conversion.

All you needed to do was hand over an E320 tourer donor vehicle and a vast sum of cash. In exchange for your hard-earned dosh, you received a fire-breathing station wagon pumping out 272bhp from a naturally aspirated 3.6-litre lump. Your new car wore seventeen-inch alloys wrapped in 235-profile rubber and displayed plenty of exterior AMGery (front apron, side skirts, flared wheel arches, spoilers, colour-coded grille trim and door panels), although the original owner of the green giant seen here opted to omit some of the more pronounced bodywork decoration, even if the optioned Malachite Green paintwork was as eye-catching as the performance delivered by the angry inline-six.

Of the 172 E36 AMG Sports Tourers built, you’re looking at what’s considered the most expensive conversion of them all. The garish twin-tone leather, the trim-matched Nokia carphone, the electrically operated sunroof, the additional speakers buried in the headlining. These special orders didn’t come cheap, but the buyer was rewarded with opulence on wheels and a modified Mercedes only 10km/h slower than the V8-equipped E500. With more room in the back and arguably more smiles to the mile, the E36 AMG wonder wagon is one of the rarest and most desirable of all W124s.

As the 1980s were drawing to a close, Hartmut Boschert, an engineer from Emmendingen, fancied making a Gullwing-styled sports car using a modern Mercedes as his platform to play with. The then-new 300 CE seemed like the perfect base model. SL body parts were fitted and the car’s C-pillar was moved forward by almost thirty centimetres, an alteration which not only drastically changed the coupe’s appearance, but one which was intended to promote better road handling thanks to a shortened rear end with less overhang. Of course, this change means the roof is much shorter than when it rolled off the production line, as are the rear side windows. The resulting Boschert B300 was revealed at the Frankfurt Motor Show in 1989. A non- Gullwing B300-24 Sport (like the car pictured here) was introduced a short while later. The asking price was super-high due to the amount of fabrication and custom parts required for each build. For example, the bonnet and bumpers are bespoke fibreglass parts, while the R129 grille is shortened in width. The front wings and rear quarters look standard, but they’re Boschert parts shaped with custom folds and contours. Only the doors, boot lid, wheelbase, cabin furniture and engine remain as Mercedes intended, although you could put paid to standard power by asking for your B300-24 Sport to come loaded with twin turbochargers. Suits you, sir!

As you might expect, the B300-24 Sport doesn’t exactly behave like the R129 its front end apes. After all, the car’s chassis is that of a largely unchanged W124. There’s no denying the 24-valve inline-six – in this instance, an engine fired up by remote control – enjoys travelling at high speed, but there’s little difference between the performance of Boschert’s creation and that of a standard 300 CE.

In a world where R129s and W124s do very different jobs and can be acquired with zero effort, it’s difficult to see who the B300-24 Sport appeals to. Needless to say, Boschert’s ambitious production volume target of three hundred units was never realised, making his unusual pet project a rare sight today.

What’s your ultimate W124? We’ll bet there are many of you thinking about the 400E , 500E and E60 models right now. These V8-powered behemoths propelled an everyday car into an entirely new automotive sphere thanks to outrageous power figures and engines ranging between 4.2-litres and six-litres of displacement. Rarely had there been such a magnificent mix of luxury and sporting prowess in a Mercedes production car.

Readers of the Drive-My will have enjoyed our article detailing the history of the world’s biggest tuning firm, Brabus. Company head honcho, Bodo Buschmann, was convinced there could be more to gain from tuning the W124. He ably proved the point by launching the Brabus E65 in 1993. Taking a standard E500 as a base – yet refraining from adding extra bodywork adornments – the boys from Bottrup fitted staggered eighteen-inch five-spokes with wide-profile tyres, Brabusbranded Alcon brakes and understated model-specific interior trim. Not much to differentiate the E65 from a stock E500, then? Oh, wait. We forgot the hulking great 6.4-litre 32-valve quad-cam V8 chucking out a huge amount of torque, close to 450bhp, an exhilarating top speed of 177mph and the ability to complete the 0-62mph sprint in no more than a rapid 5.2 seconds. Not bad for a big ol’ brute weighing 1710kg!

V8-bolstered W124s are highly sought-after today, but much like the W124 range as a whole, they’re not considered to be difficult to get hold of thanks to production in excess of 10k units (all of them left-hand drive). The Brabus E65, on the other hand, is a prized collector’s item fetching big bucks. 1990s super saloons don’t get much more impressive than this.

By 1995, Mercedes was ready to call time on W124 production in readiness for the launch of the W210. More than 2.5-million (yes, you read that correctly) examples of the earlier model found homes after the manufacturer’s product reveal took place in Spain during the winter of 1984. With more than a decade of sales success to celebrate thereafter, a ‘last hurrah’ seemed entirely fitting. W124 cabriolets may be much larger than most droptops, but that didn’t stop close to 34,000 of you placing an order for a C124 at your local dealership in period! 1,390 Final Edition W124s were completed between October 1996 and July 1997. Given option code 907, these commemorative cabriolets featured black leather, burl wood, air-conditioning, lowered suspension and seventeen-inch AMG alloys. Engine options were limited to two-litre and 2.2-litre inline-fours with a lone inline-six in the form of the 3.2-litre M104.

Surprisingly, more than half of buyers excited by the Final Edition opted for the larger four-cylinder engine, as fitted to the beautiful blue example pictured on these pages. Muted colours, dignified styling and respectable performance made the limited-run four-seater an attractive purchase and an instant future classic. W124, we salute you!