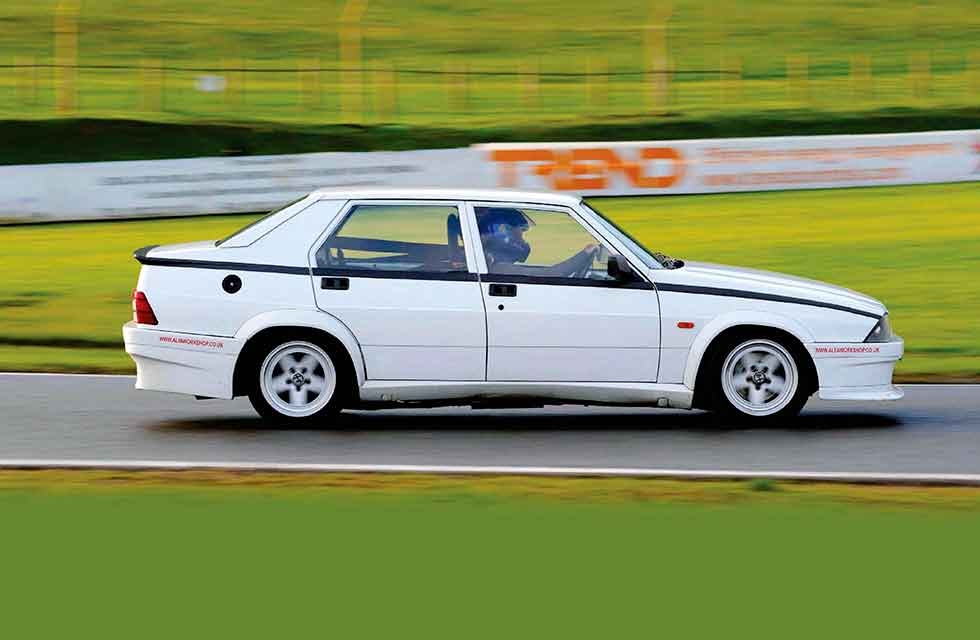 From the passenger seat, Jamie Porter is yelling: “You’ve got no ABS, no power steering, no traction control and no stability control!” In steady drizzle with track temperatures scarcely above zero, we can add ‘no grip’ to that list. We’re on a slow-speed sighting lap of Brands Hatch, yet Jamie’s 280hp, GTA-engined Alfa 75 already seems hell-bent on going sideways. It has all the composure of a flamingo on a frozen pond. Yet it’s hilarious fun.

Jamie Porter’s Alfa Workshop, based in Royston, Hertfordshire, is among the UK’s leading independent Alfa Romeo specialists, with a healthy side-line in tuned 4Cs. “I started the business in 1985,” explains Jamie. “A friend let me drive his Alfasud, which led to me buying a Sud Sprint and working on Alfas in my spare time. I’d been bitten by the bug.” Today, his Alfa collection contains no less than three 75s: one for spares, another on winter tyres for when it snows (yes, really) and the heavily modified track car you see here.

“This is a track car par excellence, and one that anyone can build on a small budget”

Ironically, it was a piece of trim that condemned this 75 to life as a track toy. “The headlining was sagging so much it touched my head,” recalls Jamie, “and since you can’t buy a replacement from Alfa, I decided to go without. Soon I was stripping other parts from the cabin – carpets, rear seats and half the dashboard – on a mission to save weight.” Unwittingly, Alfa Workshop’s part-time project had started to take shape, and it would be a year of evenings and weekends before it was finished.

The distinction between a track car and race car is important. Jamie never wanted to go racing (“a good way to lose a lot of money,” he quips) and the Alfa, accordingly, remains road-legal. It was also built to a budget. “A bit like the 75 itself, it’s a mish-mash of existing parts we had lying around,” he jokes. Whatever items couldn’t be salvaged, Alfa Workshop simply made itself. The end result is slightly rough around the edges, but that’s part of its appeal.

For its first forays on-track, the 75 still had its original 2.0-litre twin-cam engine. However, it wasn’t long before Jamie swapped that for a palpably more potent 3.2-litre Busso V6 – a relatively easy fit since the 75 used both 2.0 and 2.5 V6s during its lifetime. Quoted output in the donor 147 GTA was 25ohp, but a custom air intake, tweaked ECU and removing the catalytic convertor have liberated an extra 3ohp. Performance? Well, the front-wheel-drive 147 could reach 62mph in 6.3 seconds. In a rear-drive 75 that weighs less than a tonne, that drops to more like 4.5 seconds.

At present, the Alfa has standard brakes with uprated pads, but Jamie’s ‘winter job’ will be fitting 330mm front discs and four-pot callipers from that same GTA. He also plans to convert the rear discs from inboard to outboard, so that braking effort isn’t routed through the driveshaft. “It should improve reliability,” he explains, “which is important when it comes to keeping costs down.”

The suspension also comes courtesy of the Alfa Romeo parts bin. After an RZ met a wall at Hampton Court Palace – causing £60,000 of damage and writing it off – the wishbones and rear De Dion tube (identical to those in the SZ, incidentally) were donated to the 75. The only non-Alfa parts are Koni coilover shock absorbers, which replace the front torsion bars and are easily stiffened up by turning a screw on the top. After parking up in a Brands Hatch pit garage, that’s about the extent of Jamie’s pre-track preparation.

Being able to drive to and from circuits was important, so the 75 maintains a modicum of civility. There’s still a heater, for starters (something I’m inordinately grateful for today), the Sparco seats are generously padded and there’s no roll cage to clamber through. On the flip side, there’s no radio or any trim to speak of, the plastic windows don’t open and the door cards are sheets of plain aluminium. Jamie has relocated the speedo in the left of the instrument binnacle, plumbing in an aftermarket rev counter (“£35 from eBay”) straight ahead of the driver. A deep-dish Momo Corse steering wheel completes the no-nonsense look.

I pull the door shut with a clang, turn the tiny key and the V6 barks ebulliently into life. This is no highly-strung race engine – it’s almost standard – but with no sound insulation, its urgency seems amplified. Then I remember that, when the 75 was new, a 28ohp output would almost outgun a Ferrari 348 TB. How times have changed. The single-plate sintered clutch has an abrupt biting point, so I pull into the pit lane in a series ofjerks, lining up behind a convoy of 4CS – all modified by Alfa Workshop. I can see my breath and the track-biased Toyo R888 R tyres are stone cold. Then I’m off.

Not literally, you understand. Despite snatching several armfuls of opposite lock, I manage to keep the 75 out of the gravel traps. But this morning’s session is more about getting used to the car than probing its limits. That, I hope, will come later, if the surface dries out. For now, I simply lean on the lusty torque of the Busso engine, short-shifting with the long, spindly lever and enjoying the lively unassisted steering – and even livelier rear axle. I note how many other cars on-track give the tail-happy Alfa a cautiously wide berth…

Back in the pits, I don’t feel like I’ve learned much. But I’ll wager I’ve smiled more than all my fellow track- dayers in hot hatchbacks. Even at modest speeds, a rear-drive car feels more rewarding when you get it right – a challenge that’s key to this Alfa’s appeal. With 75s becoming ever scarcer, Jamie suggests the 145 and 156 as good candidates for budget track cars, but I suspect the experience would be very different. That said, in weather like this, they’d certainly be easier to control.

I stop for a sandwich, washed down with a cup of rocket-fuel coffee, while renowned Alfa Romeo racing driver Ted Pearson takes the 75 out for a few laps. He doesn’t hold back, hounding a new Porsche 911 GT3 RS (a car with nigh-on twice the power) until it reluctantly moves over. The guttural howl of the Busso V6 at full chat along the pit straight gives me goosebumps. It’s hugely more evocative than the turbocharged whooshes of modern machines.

Finally, the track is drying, so I strap in and head out for another session. Diving downwards through off- camber Paddock Hill Bend, I feel the Toyos beginning to bite. Turn-in feels superbly sharp, and the rose-jointed, RZ-derived suspension keeps the car commendably flat. Then you simply use the long-travel throttle to feed the power in gradually, balancing on the boundary between grip and slip.

The contrast between the dry racing line and treacherous damp Tarmac either side means oversteer, whether planned or not, is still very much on the menu. Nonetheless, put your trust in the 75’s planted, predictable chassis and it’s soon clear it won’t bite back. If you spin, you almost certainly have yourself to blame. Just be sure to heel-and-toe when downshifting; the extra weight of the V6 up front causes the transaxle rear to lift under hard braking, potentially locking a wheel.

I’m working the engine much harder now, racing to the 7000rpm redline over and again. Its ravenous roar pulsates through my fingertips and ricochets around the sparse metal cabin. In such a light car, it’s brutally quick: almost supercar quick. And while the Alfa’s grip limits are relatively low, its abundance of feedback – of sheer driving joy – is up there with far more exotic machines. Not bad for a 28-year-old saloon with cut- down coat hangers for door handles.

On the road, I suspect the Alfa would be hard work: tiresome in traffic and a handful when it rains. But it’s a track car par excellence, exactly as Jamie intended. The good news is that “anyone can build a car like this. All you need is a small budget, a little mechanical knowledge and enough time.” And, as our panel on the following page reveals, taking part in track days needn’t be expensive, either. With ever more traffic and speed cameras clogging our roads, building a project track toy could be the ideal way to enjoy your Italian car.

TRACK DAYS: HOW TO GET INVOLVED

Our track day at Brands Hatch was organised with help from OpenTrack. We spoke to boss, Dave Woodall, about how to take part.

Q: How did OpenTrack start?

A: I used to be a motoring journalist, working for some of the modified car magazines. I’m also an Alfa Romeo fan, having owned a 33 Sportwagon and two 156s. I set up OpenTrack in 2008 and we’ve offered track days across the UK ever since.

Q: What do people need to take part?

A: Just a car and a valid driving licence. You also need a crash helmet, but you can hire those from us at £20 per day. Your car needs to be in good condition, with decent tyres and fluids topped up.

Q: How does the ‘open pit lane’ concept work?

A: Apart from a break for lunch, the track and pit lane are open all day. We don’t have timed sessions and you can do as many laps as you like. Just attend a safety briefing in the morning and you’re good to go.

Q: Where do the track days take place?

A: We stage events at most UK circuits, including Anglesey, Castle Combe, Oulton Park, Goodwood and Silverstone. We also visited Spa for the first time in 2018.

Q: How much does it cost?

A: You’ll typically pay between Egg and Ei4g, depending on the circuit. The cost includes free tuition from expert drivers, snacks and drinks, plus photos of your car in action. We also run track evenings from April to September at Donington Park and Brands Hatch, priced at Egg.

Q: Any tips for the novice track driver?

A: For most people, spending money on additional driver training will be far more beneficial than adding power or fitting bigger brakes. Our coaches include ex-Fi and Le Mans drivers, so they know their stuff.