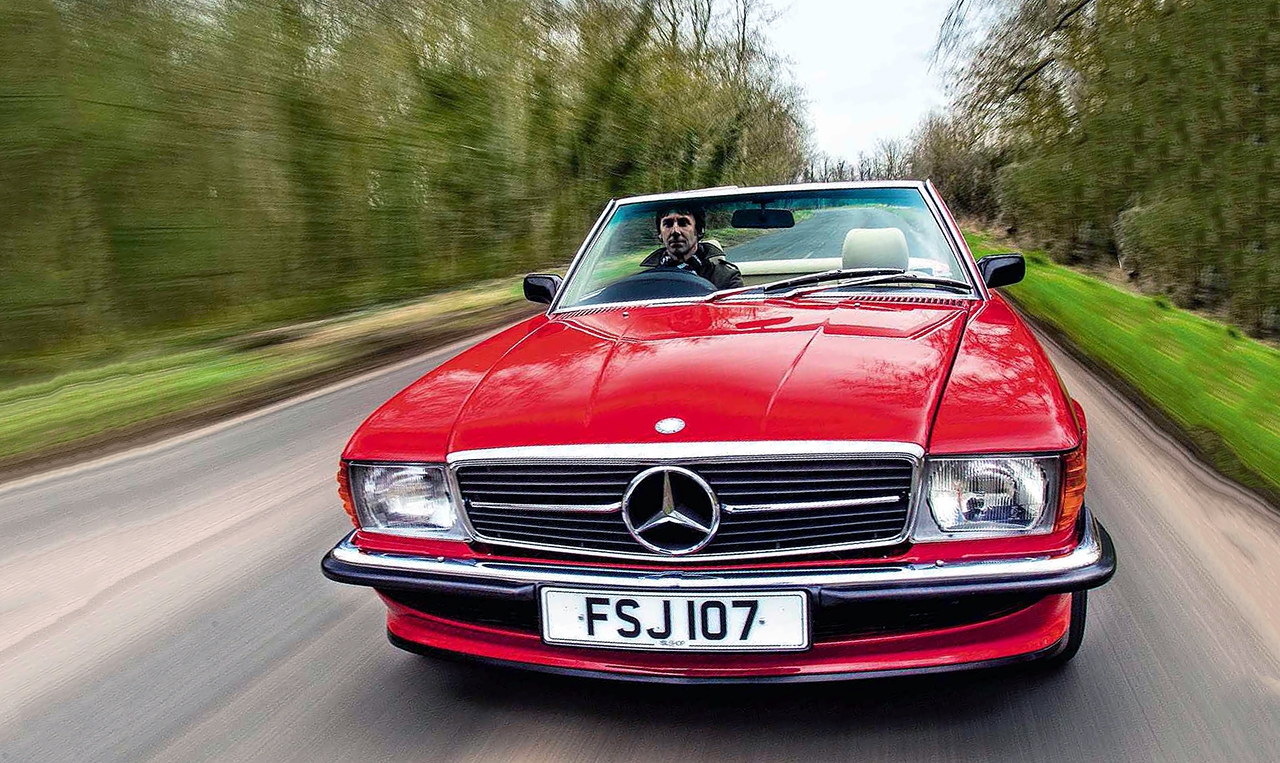 Red in tooth and claw SportLine Mercedes R107. Bobby Ewing’s favourite gets a sporting update. It’s a 300SL – but not as we’ve known it. Mark Dixon tests the £140,000 SportLine. Photography Mark Dixon.

You probably think that an R107 Mercedes-Benz SL is a pretty nice car just the way it left Stuttgart. Clearly many do, for prices have lately been rising as people realise they’ve missed the boat on the iconic Pagoda-roofed SL of the 1960s. A top-condition R107 is now nudging a heady £70,000, maybe more. But can you imagine spending twice that amount on one?

Well, the people at The SL Shop, who restore, service and sell these fine convertibles at their premises in Worcestershire, hope you might. Their cleverly named SportLine (SL was German shorthand for Sport Leicht, or Sports Lightweight), fully restored and with all the company’s unique modifications, is priced at roughly £140,000.

But the SportLine is rather special, particularly in the engine department. This six-cylinder 300SL develops 255bhp – that’s more than a V8 500SL – and has handling that’s been sharpened to match. We still had our doubts but The SL Shop suggested we borrow the car for a couple of days with the instruction to ‘make sure you drive it hard; that’s when it comes alive’. Encouraging. 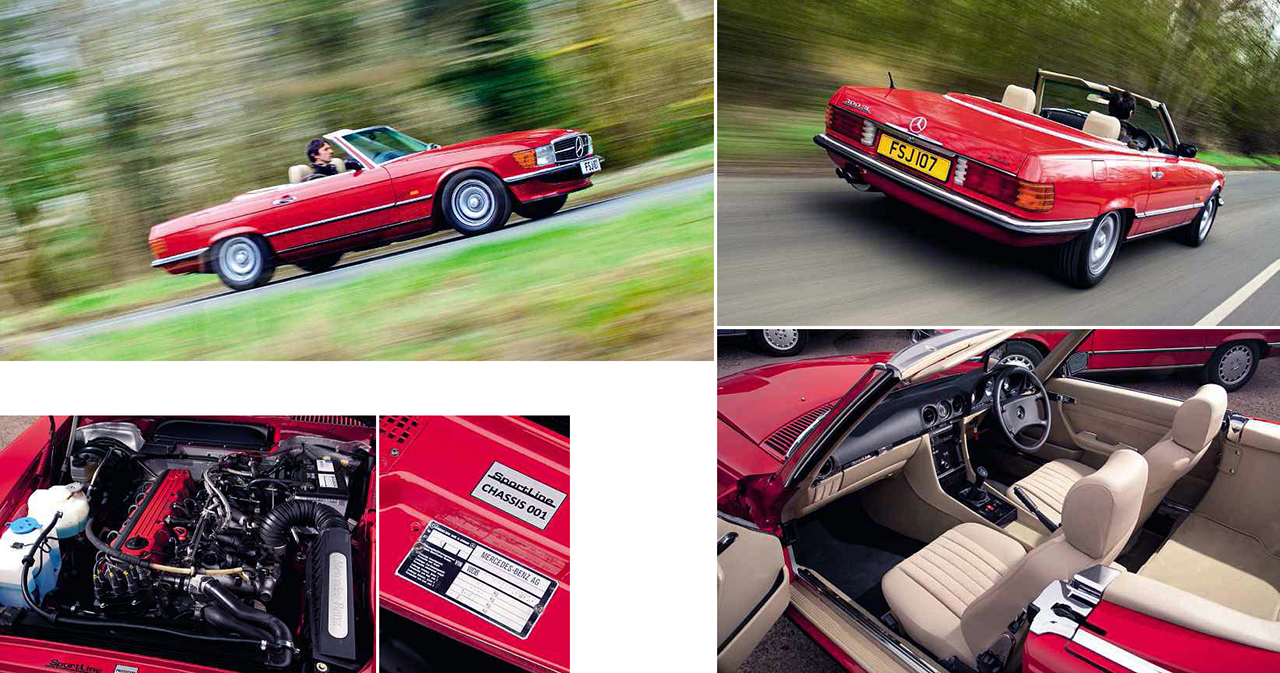 The SL Shop realises it’s taking a considerable gamble on inviting commissions for a premium-priced R107, but points out that to fully restore one of these cars to concours condition costs a lot of money and they couldn’t do a proper job for less. It’s a fair point, and you’d pay much more for, say, a top-quality DB Aston restoration – but will punters feel the same way?

It appears so, because five SportLines have already been commissioned. Two of those will be V8s – although The SL Shop feels that six-cylinder cars are more suitable for the SportLine treatment. ‘The six is more of a driver’s car,’ explains company director and general manager Bruce Greetham. ‘It’s a bit lighter on the front end; the V8 tends to drive you rather than the other way around.’

Bruce (a lifelong Mercedes enthusiast and a previous multiple concours winner in M-B Club events) also explains that if you push the envelope too far with the 107, trying to extract maximum horsepower from the biggest engine, you’re turning the car into something it was never meant to be. Better, he argues, to respect the Grand Tourer ideal and rein in your ambitions, although customers who want a V8 can still benefit from the SportLine’s suspension upgrades. You don’t have to tick all the boxes, but what The SL Shop won’t do is sell the SportLine parts as accessories; only complete cars will be available, restored, claims Bruce, ‘to perfection’.

Certainly, their prototype SportLine, finished in a very ’80s Signal Red with cream leather, looks hard to fault. The interior, at first glance outwardly stock, features a few subtle (and not so subtle) changes such as seats retrimmed in Nappa leather with Alcantara inserts and red stitching. The steering wheel is an inch smaller than standard and the gearlever is a giveaway that the five-speed manual ’box underneath is from a 1990s C-class. Talking of class, we’re not convinced by the white instrument faces, illuminated red at night. They look rather cheap and we’d much prefer the standard dials, which would help preserve the Sportline’s Q Car look.

The engine bay (pictured over the page) is much more impressive, and studying it you begin to see where the money has been spent. Not just on the mechanical bits, either: R107 bulkheads are notorious for rusting inside the heater chamber, which is a difficult area to repair – unless you’re performing a ground-up restoration. But the 2962cc straight-six is obviously the focal point. It’s not massively re-engineered; rather, tweaked and tuned. The major changes are a lightened and balanced flywheel and crankshaft, Omex fuel injection system (with larger M-B injectors), modern coil pack in place of the old distributor, mapped ignition, ported and polished head, reprofiled cam for better torque… There’s more, but you get the drift.

Last (in the chain) but not least in terms of driver satisfaction is the bespoke exhaust system. Let’s find out what that sounds like. Turn the key and, after a little churning, the engine fires and runs at what’s initially a lumpy idle before finding its equilibrium and settling down. The gearchange has that slightly rubbery feel typical of a ’90s car but it’s correspondingly light; the footwell is slightly cramped but the pedals are perfectly placed for heel-and-toeing.

Biggest gripe is that for a tall driver the smaller steering wheel completely obscures the upper segments of the speedometer and revcounter, just where you need to see them most. And the steering column is not adjustable. The SL Shop is considering making one; for me that would be an absolute deal-breaker.

Put concerns about speed cameras behind you (so to speak) and you’ll find the SportLine is hugely enjoyable to drive. Without doubt, the engine is the heart of the car and it does indeed respond to being exercised hard. Its exhaust note is not obtrusive – in fact, you need to be driving top-down to get the full benefit – and it’s pleasantly gruff at lower speeds, before firming up dramatically into a hard-edged mechanical howl at 3500-4000rpm in a manner that’s addictive. It’s almost impossible to resist blipping the throttle in theatrical fashion on downshifts in a most un-SL-like way, which gets you grinning like a loon at the improbable performance car noises emanating from this boulevardier.

Except that this SL is a boulevardier no longer: it really handles. The suspension feels relatively soft (helped by those pillowy seats) and yet the damping is well controlled; the car corners very flatly indeed and it has a noticeably sharp turn-in. The power-assisted steering could have more feel – a reminder of the R107’s origins, and another reason not to build a monstrously fast V8 – but it’s accurate, responding to that disciplined precision and lightness of touch that German cars of this era always seem to encourage.

The handling improvements are courtesy of a ride height lowered by 80mm, custom-made progressive springs and bespoke dampers, 5mmthicker anti-roll bars, 7in-wide reproduction ‘Mexican hat’ alloys rather than the factory sixinchers, and some careful attention to geometry set-up. It really is very impressive – our drive came within days of testing the new Rolls-Royce Dawn, and the SportLine shaded it for ride quality. Not bad for a car designed the best part of 50 years ago.

Which leaves the £140,000 question: is it worth it? Depends on how much 140 grand means to you, of course, but this is a quality classic that goes like a modern and which you could use every day without too much sacrifice. Hood down, side windows up and the ugly wind deflector slotted behind the seats, it’s fairly buffet-free at, er, 80mph (blame that hidden segment of speedo). There’s loads of space behind the seats and in the boot, so it would make a great holiday car. We ended up liking it much more than we’d expected. One final but not unimportant point. If you’re male and need to sell the classic dream to your other half, then remember this: all women love the SL. Just sayin’.