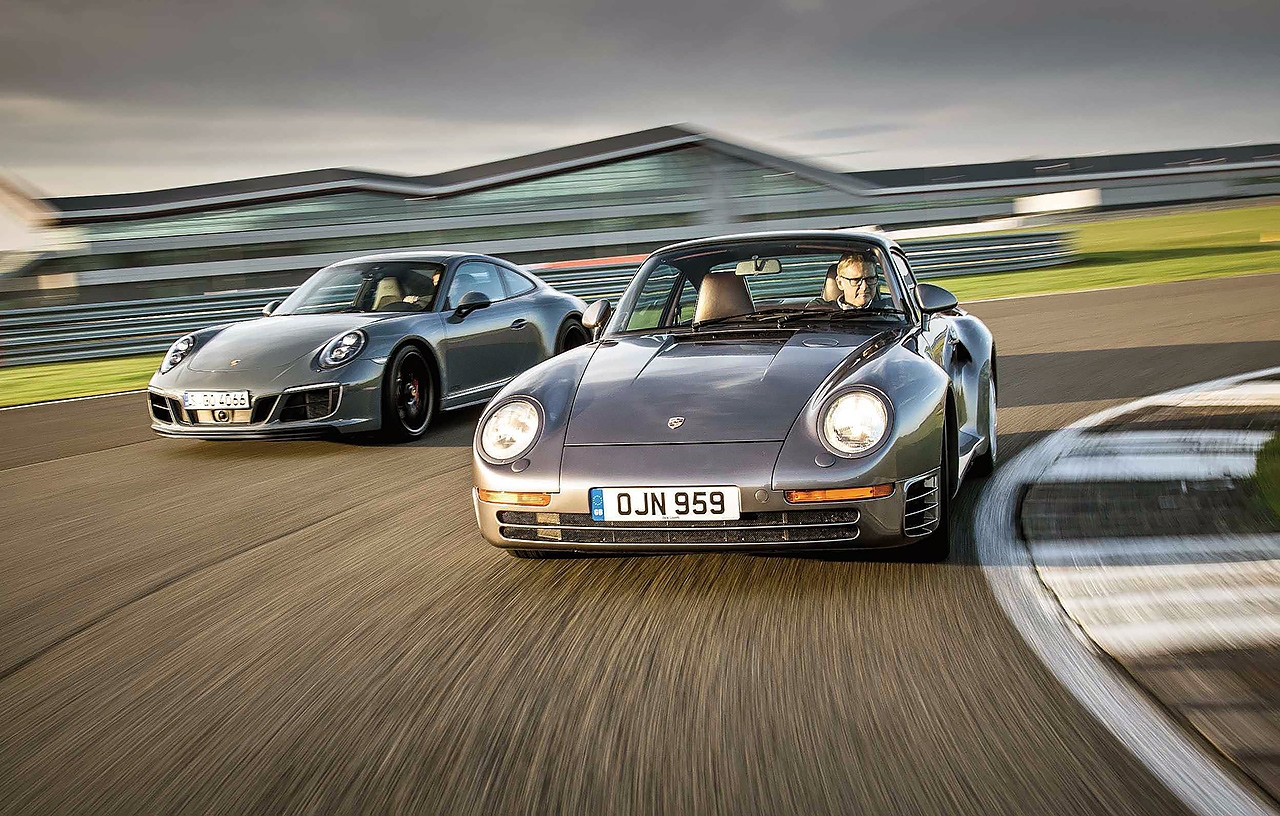 Plus Ça Change. Three decades ago, the Porsche 959 redefined the hypercar. Now all that tech and power is available in the new 911 GTS. Glen Waddington compares. Photography Paul Harmer.

Even these days, 450bhp is a lot of power in a car. Three decades ago, it was the preserve of the fastest cars money could buy. The Porsche 959, for one, as you’ll know if you’ve just read the feature preceding this one. But now, access to hugely fast sports cars is a little more democratic. And if that output of 450bhp is no longer the preserve of the very fastest, it can still make you go quite fast enough. As it always did.

It’s not only the power that’s filtered down from the top echelons. So has the tech. In fact, that started to drip through the rest of Porsche’s range not long after the 959 was launched. It’s surely no coincidence that the July 1988 issue of Car magazine carried not only the cover story of 959 vs F40 (‘The fastest sports car in the world versus the best’) but also news of the 911’s switch to four-wheel drive, with the advent of the 964-generation Carrera 4. ‘It will feature hardware found on the 959,’ they said. Air-cooled 911s are long-gone. But four-wheel- drive 911s have been part of the landscape ever since. And 450bhp? Well, metrically speaking, that’s all yours too, in the latest Porsche 911 Carrera 4 GTS 991.2.

Above. 959 was developed with Group B racing in mind, but its 2.85-litre twin-turbo flat-six was a portent of the downsizing trend in today’s engines. Above, below and left Separated by 30 years but a match for power, performance and technology, the new 911 GTS takes on the legendary 959.

Think of it as a Carrera S honed and optioned with a nod to the track-bred GT3: more driverfocused but not so hardcore; uprated and lowered with (in this case) the security of fourwheel drive and the kind of user-friendly comfort and equipment that make it perfectly usable every day, in all weathers. It’s yours for around £100,000 (the 959 was £145,000 three decades ago, and the sub-10,000-miler you see here is insured for £1.25 million now). Want more power in your new 911? More like £150,000 gets you more like 580bhp with the Turbo S, also with four-wheel drive and – tellingly – no rear-drive option.

Hence the appearance here, together, of the 959 and the latest 911. If it hadn’t been for the 959 stretching the technology envelope, cars such as the GTS might not be with us. And yes, we know that purists will mock all-paw 911s and forced induction. Well, you can go for drivetrain purity with the GTS, but – now the stratospherically high-revving GT3 and 911R are no longer available – it’s turbos only now for every 911, even the base Carrera. Two of them, indeed. So that’s something all 911s now share with the 959.

‘Power, acceleration and top speed of the GTS are almost a perfect match for the 959’s’

‘The 959’s cleverness doesn’t get in the way of the experience. And the same is true of the 911 GTS’

The 959 also lent some of its aerodynamic properties to subsequent 911s, though it was the Porsche 911 993 (last of the air-cooled cars) that capitalised on the aesthetics. Walk around the 959 and it’s difficult to reconcile the fact that it was based on the impact-bumper generation. But while the central tub is standard steel, and the door shapes and interior are familiar to anyone who knows the 1963 originals, what you touch is all very much late 20th Century.

The roof, wings and tail are a mix of Kevlar and Aramid composites (no carbon; this was the 1980s) and, because the roof was a brandnew skin, Porsche took the opportunity to go without rain gutters, reducing drag and modernising the look instantly. Who needs rain gutters on a competition car?

Meanwhile, the doors, like the front bootlid, are skinned in aluminium – look for the tell-tale rippling caused by the stresses transferred to those lightweight surfaces by the door mirrors. And while they clunk shut with the same precision as those of any air-cooled 911, they lack that heavyweight slam and often need two attempts to close, thanks to their lack of weight.

Inside, the dash is that same old shape, complete with the five-clock pod. The centre console has been modernised and there are proper air-con controls on the dash, yet, bar the metallic burgundy-and-silver leather seats (yes, metallic. And burgundy and silver), it’s all as was. But look closely and you’ll spot changes in the dials (a water-temp gauge for the cylinder heads!) and new warning lights. Plus there’s a third column stalk for switching between fourwheel drive modes for dry or wet, or snow and ‘traction’. Happily, we’re in the dry setting.

That centre console contains a ride-height control – that and the leather confirm that this is a Komfort version, rather than a Sport – and a dial for the adaptable damping. And there’s a six-speed gearbox, though, where you’d expect to find first is a (relatively) low ratio for off-road conditions, marked ‘G’ for gelande, while first itself is down to the left on a dog-leg.

Fire up and it’s instantly recognisable as a 911; that same chatter over a bass rumble, though also a hint of piston slap, a tinkling sound within the air-cooled cylinders that fools me initially into thinking I can hear the coolant sloshing around the cylinder-heads’ water jackets. There’s power steering (like the 4WD, something no 911 before had been fitted with), though you’d scarcely know it as there’s real heft at manoeuvring pace and proper consistency in response as speed increases.

Ease into gear – a familiar sensation too, as is the over-centre feel of the floor-hinged clutch pedal – then pull away and there’s nothing other-worldly about the experience. Not yet. Shift through the gears and you’ll discover a pleasingly mechanical resistance through the lever, though braking is somewhat alien. It’s a fully powered system, Citroën-style, and the pedal is rock-solid yet retardation is instant and unrelenting. The pedal also sends a signal to the transmission, uncoupling the front axle for a keener turn-in, negating potential understeer or steering corruption. Clever. But what you really want to know about is the performance.

It’s very strong, burgeoning above 3000rpm or so, after which point the engine note starts to lose its pure 911 nature and reveals the racebred Group C beast within. Gone is the howl of a 911, in its place a guttural roar, hard-edged and insistent though never deafening, mainly because it tends to fall away behind you as it builds.

And then you hit 5000rpm, the second of those sequential turbos comes on strong and the acceleration pummels your kidneys. Instantly it’s rocketship territory, the kind of force that has you clinging on in bewilderment as you adjust mentally. The fastest car in the world? Yes, that claim suddenly resonates. It still feels like a 911 – more so than does the new GTS, because you’re always aware of that weight in the tail, and its nose rises as you accelerate. Yet even though there’s a pendulum threatening to swing behind you, the 959 pulls you out of trouble.

One of the reasons Car rated it above the F40 (yes, the Ferrari was the fastest…) back in 1988 was because of its great traction and nimbleness; this is a car you enjoy rather than fear when the going gets twisty. It is throttle-adjustable yet it doesn’t bite back if you don’t quite get it right. It even rides well, with a pliancy I don’t remember of any impact-bumper 911. The 959 is a fast and satisfying Porsche first, a technological statement second. The cleverness doesn’t get in the way of the experience.

And the same is true of the 911 GTS. It’s lower and fatter than the 959 and its centrelock 20s make the 959’s 17s look like castors, hollow spokes or not. Inside, the iPad slick of the centre screen and the track-inspired Alcantara trim make the 959 look gauche. Yet the sense of occasion is diminished. It gives you an appetite for driving, no mistake, but there’s no edge of trepidation here.

Fire up the flat-six and it blats encouragingly, musically, but it’s less raw, less omnipresent. The electric rack feels over-light as you move away, and the seven-speed dual-clutch transmission makes things easy, less intimidating. But it all comes together with speed, and you won’t have any trouble achieving more of that.

Good grief, this thing is quick, and effortlessly so, too. Sure, its power figures and those for acceleration and top speed are almost a perfect match for the 959’s, but that car made you work harder for them. You had to find your way around the gearbox and cling on when the second turbo blustered in. With the GTS, it’s a case of planting your right foot and whooping with glee at the way you gather speed from the off. It’s addictive stuff, and all the more satisfying in Sport mode (quicker throttle response, more bite to the shift) and using the paddles.

The GTS is a touch heavier than the 959 yet feels lighter on its feet, and its ability to change direction is dizzying. It’s enormously adjustable, and will ease things back into neatness when you get it wrong, always feeling more subtle and less mechanical than the older car. Even the electric steering comes alive, its precision and speed of reaction making up for the lack of sizzle at the rim. And if that water-cooled twin-turbo flat-six lacks the 959’s aural presence, it more than matches it for responsiveness.

What’s remarkable is not that it’s taken 30 years for a relatively mainstream car to reach the envelope of late-1980s achievement, but that its functions have been refined and integrated to such an extent that 450bhp and a near-200mph top speed feel normal. The 959 also heralded the era of downsizing, its 2.85-litre engine relatively tiny for the era, letting the turbos do the work (a product of race regs – the 935 raced in the 4.0-litre class). How long before the basemodel 911 has this much power?

It’s a brilliant car, the GTS, certainly the most satisfying 911 currently on sale. Yet it is a product of its era, rather than a seismic shift in a way the 959 was. There is one landmark Porsche here. In fact, the 959 was the landmark car of its time. Full stop.

THANKS TO Silverstone Circuit (www.silverstone.co.uk), Mike Robins and John Manning.