The BMW 6-series E24 is approaching its 12th birthday. As revealed earlier in this issue, in 1989 it will be replaced by the E31 8-Series coupe. But far from being a dinosaur from an earlier decade, the latest version of the 635CSi is still an immensely satisfying car. 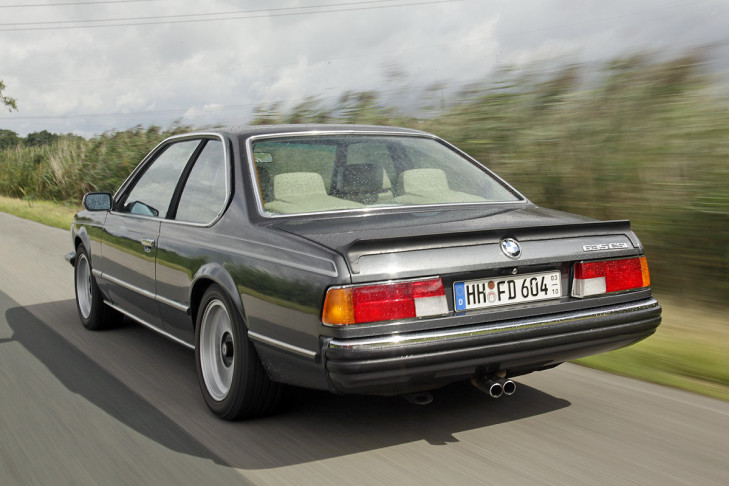 The four-speed ZF 4HP automatic is now equipped with electronic control and a choice of sport, economy or manual driving programmes. Combined with a final drive ratio of 3.64:1 and the low-profile Michelin TRX tyres also fitted to the 735i, this gives the 635 appreciably lower gearing than before.

Maximum speed is now achieved in fourth gear, the 635 managing a 134 mph mean with the engine spinning over well below its power peak at 4900 rpm. BMW claims 110 mph for the automatic model, and with a few more miles on the clock this might well be feasible.

From a standing start the 635CSi performed as BMW predicted. The quickest launches were achieved simply by flooring the throttle in ‘D’, the car reaching 60mph in exactly the claimed 8.4 secs. That’s almost a second slower than the last 635CSi we tested, while the latest 3.6-litre automatic version of Jaguar’s XJ-S coupe recorded exactly the same maximum and was half a second quicker to 60.

Selecting ‘Sport’ with the rotary switch to the right of the gearchange docs two things it locks out top gear, limiting the 635 to a top speed of 121 mph, and moves the part throttle and kickdown points up the speed range. On full throttle the change points are the same in D or S, just nudging 6000 rpm.

Using the 3-2-1 setting on the knob actually locks the gearbox into the gear selected, even from a standing start — useful on slippery surfaces or on very hilly ground. The rev counter has a two-stage red line beginning at 6100 and going solid at 6300 — this is supplemented by a cut-out at an indicated 6250rpm (6100 rpm true).

The box actually changes gear very smoothly indeed, only a kickdown of two ratios causing any form of lurch. The selector handle itself seems to be the same as the 735i E32, stiff and awkward to use — BMW would do well to examine the ‘J’ handle on old Jaguar’s XJ6. The programme selector switch isn’t illuminated at night and there is no light on the facia to indicate when you are in sport mode.

Leave the car in sport and it goes very well indeed, with no hint of vibration or harshness even with the engine right on the redline. With such smooth power delivery you wonder why there’s any need tor a 12-cylinder engine — the big BMW six is an object lesson to other manufacturers.

This effortless performance is not at the expense of economy. We managed an overall figure of 17.2mpg, giving the E24 635CSi a range of 260 miles from its 14.4-gallon tank. With 11 ins disc brakes all round, ventilated at the front, the BMW has the stopping power to match its performance. Although the pedal action was rather spongy, our tests showed them to suffer only slightly from fade, and a 40lb pedal load was able to generate 1.1 g before the standard Bosch ABS came into action.

As well as a new nose incorporating the ellipsoidal headlamps from the 735i E32, the CSi inherits its wide alloy wheels and ultra-low profile 240/45VR415 Michelin TRX tyres. They provide impressive traction in the wet or dry, and for a big automatic the 635CSi can be flicked around with some verve. Strut front suspension and semi-trailing arms at the rear are almost a BMW trademark, and there is no sign of the tail-happiness sometimes attributed to this marque.

Steer the car into a corner at speed with the optional 15ins ‘M Technic’ wheel and it responds better than you might expect from a power-assisted ball and nut system. This is not the Servotronic speed steering system fitted to the 7 but nevertheless provides just the right balance between weight and feel — and at 3.2 turns lock to lock is higher geared than other BMW models.

Up the speed and the car responds with gently increasing understeer. With some lock wound on, the car can be unsettled by lifting off the throttle, but only then does flooring it again cause the. car to drift into oversteer. Careful suspension development matched to good tyres makes handling surprisingly controllable — even on a damp road it would take a determined effort to spin the 635CSi.

This well-balanced handling is not achieved at the expense of ride comfort. While not quite up to Jaguar levels, the 635CSi E24 is impressively supple at speed, with only a slight amount of bump thump at lower velocities. Despite the low-profile Michelins, tyre noise is generally well controlled, and in fact the 635 rides better and quieter than our long-term 735i E23.

Stability is excellent, even at maximum speed, displaying none of the nervousness around the straight ahead position from which the 735i E32 suffers. At cruising speeds there is only slight wind noise from the frameless front windows, a murmur from the tyres and no sign at all of the engine noise.

Full leather means just that. Apparently BMW uses 27 square metres of hide for the interior of a 635 compared with the previous model’s 11 square metres. Where vinyl is used, it is so well matched to the leather it’s extremely hard to spot the difference. The stitching and fit of the panels is immaculate, and the whole interior has an air of class.

BMW has a few chinks in it’s ‘ultimate driving machine’ armour when it comes to the driving position of the 635. Although the instruments and minor controls are excellent, the seats feel out of place in a car like this. Electric motors control fore and aft movement, backrest tilt, front and rear cushion height and even the headrest height, but to get any form of thigh support the front of the seat needs to be fully raised and the rear fully lowered. That in turn means the backrest has to be fully forward to provide any back support — and the top of the scat curves away from the spine above the base of the shoulder blades. There is very little side support which causes problems when cornering hard, neither is there enough support for the base of the spine.

A six foot plus driver will need the seat adjusted fully back for sufficient legroom, but even with the scat on its lowest setting the sunroof restricts headroom. The steering column is adjustable for reach but not rake.

The E24 63SCSi Automatic has a capacious boot, the spacesaver spare wheel being mounted in a well under the floor. Because of the coupe design rear passengers are short of head and leg room, but less so than in an Jaguar XJ-S. Apart from the glove box and a pocket in each door, the CSi is also woefully short of oddment stowage space.

As a mile-cater the 635CSi is a superb car. It handles well, cruises quietly and comfortably all day at autobahn speeds, and detail development over the years has kept it competitive. We would advise buyers to take up the no-cost option sports seats rather than the standard electric items, but otherwise the interior is hard to fault. £36,860 looks a lot of money compared with the £24,240 Jaguar demands for an automatic XJ-S, but the BMW is better built, belter equipped and has the best engine in the business.

Balanced handling, excellent stability and ride comfort make the CSi an ideal cruiser. Equipment level Is high, and leather upholstery adds style. The engine is taken straight from the BMW 735i E32.