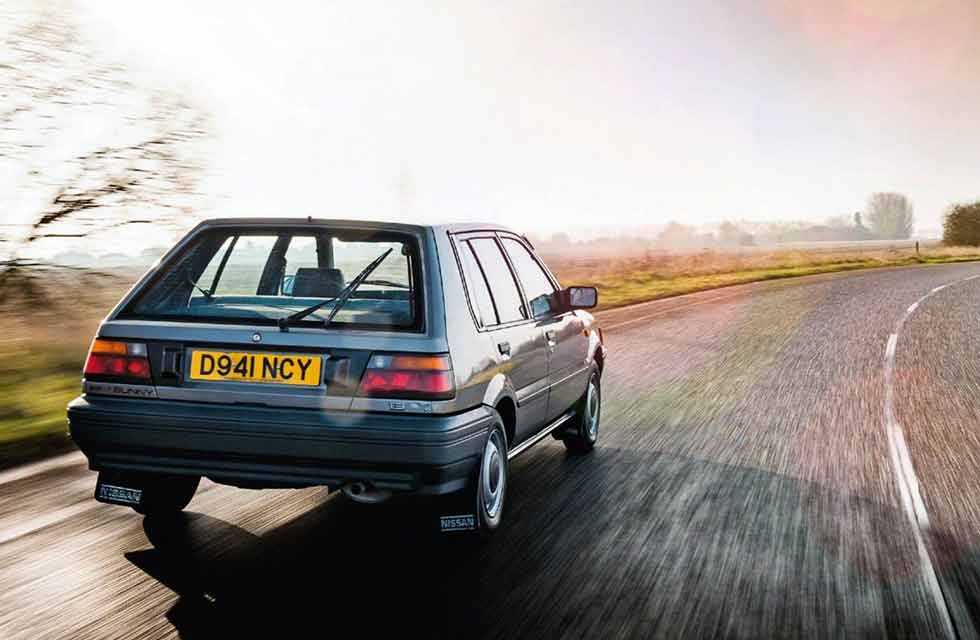 Nissan Sunny It got a generation mobile But is now as good as gone. We put the record straight on the Sunny, which set a shining example as reliable transport for a generation. Words John-Joe Vollans. Photography Jordan Butters.

Cheap transport for the masses, but with only 53 left here’s why we should cherish the survivors

Sometimes you just want a car that works first time, every time. Providing reliable, honest and competent daily transport is all the motoring masses crave and this was a role that the Sunny performed with aplomb. To enthusiasts it was just another soulless Japanese import offering as much passion and excitement as an Alan Partridge striptease. However, as we all know, we’re in the minority.

The least exciting cars can sometimes be the most endearing. Maybe a neighbour used to give you a lift home in a Sunny, or your favourite teacher drove one. We all had posters of Ferraris and Porsches on our walls, but the reality of motoring in 1980s Britain was usually very different.

The move away from protectionist economic policy escalated once we entered the Common Market in 1973. For the first time, cars built outside the UK became affordable to the average motorist, and very soon we realised that many overseas machines had distinct advantages. If it was Japanese for example, it worked…

The N13 generation Sunny wasn’t in the vanguard of Japanese models first on sale in Britain – that honour belonged to the Datsun 120Y a decade earlier – but along with the Micra it was largely responsible for Nissan’s surge in popularity in Britain during the 1980s. The firm sold so many cars here that it decided to build a brand-new factory in Sunderland – the first Japanese factory in Europe.

Production began in July 1986 with the Bluebird, but the plant would go on to turn out the Primera, Micra and eventually the UK-designed and built Qashqai.

What did the Sunny offer that made it so desirable? It was very simple – it worked and worked well. This unpretentious car wasn’t available in a million confusing models like contemporary Fords or Vauxhalls, and wasn’t plagued by the build quality issues of British Leyland products.

Although most UK owners weren’t concerned about the accurately executed engineering beneath the bodywork, they did appreciate the fact that it would start in the depths of winter. Unless you were lucky enough to buy a Metro on that day in the month when there wasn’t a strike, everyday British offerings just weren’t as good as the Japanese competition.

The N13 Sunny landed in Britain at a crucial time for Nissan. The Sunderland plant had just opened that summer and the firm had only been selling cars under its own name since 1984 (it used Datsun in the UK before this). So it had to succeed. Criticism of the previous-generation Cherry (as it was known) meant that a host of improvements were added to the N13.

Suspension is conventional MacPherson struts up front with a more elaborate set-up at the rear. Two wide parallel links work in conjunction with a forward-facing anti-roll bar that also doubles as a radius arm. All this means that the Sunny handles in a safe, understeer-favouring way. Not exciting, but then again that’s the theme here. Pile the Sunny into a bend too quickly and you can lift off without fear of the rear trying to overtake you.

This rare Sunny survivor was kept in the same family for most of its life and has covered fewer than 45,000 miles. I can’t recall the last time I saw a Sunny, other than the fantastic Group N GTI-R. There was a time, admittedly way back in the mid-1990s, when the Sunny was everywhere. Even by the end of the 1990s a trip to your local supermarket would still turn up at least one Sunny, usually badly parked with its sills and arches showing terminal corrosion. There’s not a hint of rust on this car, however.

Opening the driver’s door floods my senses with a tidal wave of nostalgia. My dad had a Sunny back in the early 1990s which he drove to and from the train station on the first leg of his commute to London. His was in a lighter (but equally exciting) shade of grey. Despite being the second-from-base model, this Sunny is still incredibly basic. It comes from the era when rear seatbelts were a novelty, although there’s still more kit in here than you’d expect from some of the Sunny’s German contemporaries.

You get an internal boot and fuel filler flap release operated by a floor-mounted pull/push lever, door mirror remote control (not electric), a five-speed gearbox, tinted glass and a radio cassette player. That’s as good as it gets, though. Meagre by modern standards, no doubt, but remember this car harks from the era of four-star petrol – if you wanted to use fancy new unleaded fuel, then you needed to take your Sunny back to the dealer for a change to its ignition timing.

Settling into the surprisingly comfy seat, the Sunny fires instantly to life, its electronic points-less ignition proving as reliable on a cold morning in 2019 as it did for its first owner more than three decades ago. The ergonomics are great with clear, concise, simple-to-read instrumentation. There’s plenty of room for the taller driver and although this model lacks the adjustable steering wheel of SLX and SGX models, it’s perfectly placed. The same tailor-made feel extends to the gearstick and pedal positions.

With just 60bhp the 1.3-litre Sunny is never going to excite – its GTI, RZ-1 coupe and GTI-R siblings took care of that. But it gets up to speed pretty well, reaching a top speed of 92mph. The steering is light and precise, and with such skinny tyres it doesn’t take a lot of effort. Even with 3.8 turns lock-to-lock, at parking speed you don’t feel the need for power assistance.

The flip side to having tiny 155 cross section rubber is plenty of understeer, especially in the wet. Push as hard as the little 1.3-litre engine lets you, and you’re likely to head into the ditch as you try to add more lock. But if you’re driving a Sunny like that, you’ve missed the point. Save your heel-and-toe changes for the R31 Skyline. At anything other than flat out the Sunny is an capable companion that should provide many thousands of miles of trouble-free motoring.

The Sunny gave the cost-conscious motorist a peerlessly reliable and fairly well-equipped car at a time when turning the key of your average motor on a winter morning was something of a gamble. The competition in the mid-to late-1980s was fierce – charismatic cars like the Peugeot 309, Ford Escort, Vauxhall Astra and VW’s MkII Golf sold more than the Sunny when new, so have survived in greater numbers.

The Nissan Sunny isn’t going to radically appreciate or make the hairs on the back of your neck stand on end with its engine note – but it will quietly impress you. It’s pretty economical, especially for a carburetor-equipped car. It handles well unless pushed to its extremes (and even then, will only safely understeer), and it’s an extremely rare sight on the road these days. The simple dash and control layouts make it quick and easy for drivers to feel at home. Like most Nissans up to the present day, the Sunny just goes about providing no-frills motoring – and there’s something honest and admirable about that.

It’s the Sunny’s time to bask in a nostalgic glow. JJ recreates his dad’s old commute. This was high spec for a near base model.

Rear belts: a novelty in the mid-1980s. Five speeds – and a well placed knob.

Sit back and relax in comfort here. The only wind-up on the whole car.

One of the few hot bits of this hatch. Nothing to irritate a driver here. As reliable as Earth’s path round the sun.

The story of Datsun’s success in the UK started with one man – Octav Botnar. At 57, Ukrainian-born Botnar won sole Datsun UK distribution rights, setting up his Sussex HQ In 1970. Datsun sales climbed from 6000 cars to more than 30,000 in less than two years.

At a time in life when most would be looking forward to retirement, Botnar grew his fledgling franchise to a peak of over 200 dealerships. He became one of the UK’s richest businessmen and was fundamental in Nissan becoming the UK’s most successful foreign manufacturer.

He was also largely responsible for convincing Nissan to build its European plant in Sunderland. All this brought him to the attention of the inland revenue, who alleged in 1991 that he had evaded more than £200million in taxes. He died a tax exile in Switzerland in 1998.