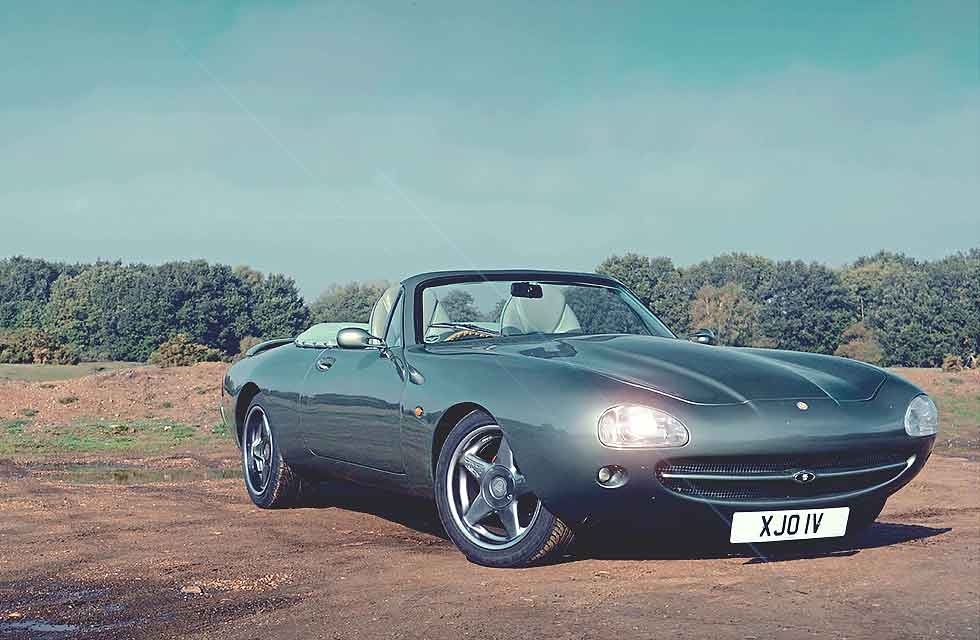 Classic Test. In the early Nineties, Autostyle’s Paul Banham offered a voluptuous glass-fibre body for the XJ-S that predicted Jaguar’s own XK8. It wasn’t only the design he changed, but the car’s character. We track down a rare example to find out how. Words & Photography Paul Walton.

With softer, rounder lines, Paul Banham’s modernised XJ-SS is an early Nineties take on the XJ-S, by then getting long-in-the-tooth. We drive this rare survivor and talk to the man himself about his curious conversion. Autostyle XJ-SS How this rare rebodied XJ-S from the Nineties changes the original car’s character.

I am not sure what to expect when I see one of the few remaining Autostyle XJ-SSs for the first time. It’s a car I’ve read much about and, as a rebodied XJ-S, it has the potential to be terrible. Many are. The design of this car looks awkward by today’s standards and its quality questionable, but it’s great fun to drive and remarkably different from its grand tourer roots. And, strangely, it bears more than a little resemblance to the X100 XK8, despite arriving three years earlier.

The company behind the conversion was Autostyle, a familiar name for anyone interested in modified Jaguars. Paul Banham started the company in the late Eighties offering modifications for Jaguars, including a convertible version of the XJ-S, XJ6 Series 3 and XJ40, plus a handsome buttress-free conversion and wide-body kit for the XJ-S coupe.

People were looking for something different: a sportier car

Always a Jaguar enthusiast, he has owned several XJ-Ss himself. “It’s a much maligned car,” he says about the model. “Everybody went on about how awful the XJ-S was when it came out because it wasn’t an E-type and no one liked the flying buttresses, yet it wasn’t a bad car. I had lots, and I enjoyed all of them. After previously owning a series of MGs and Triumphs, I’d get in an XJ-S and think, ‘Wow, this is a spaceship!’” In the early Nineties, and with the XJ-S more than 15 years old, Paul decided to offer a new design for the car. “By then, people were looking for something different: a sportier car,” he explains. The resultant shape of his cars was distinctive from the donor car – rounder and more curvaceous – more like Jaguars used to be, and he admits to being inspired by the company’s back catalogue. “I’ve never thought of myself as a fantastic innovator, but I’m a great copier of shapes and at putting the best bits of several cars together. That’s what the XJ-SS amounted to.”

Interestingly, those curves, along with the Vauxhall Corsa’s front lights and a wide, broad grille, create an appearance that is unnervingly similar to the X100 XK8 that had yet to be revealed. Paul believes that’s just because many designers were creating softer, rounder designs then. You only need to see the TVR Chimaera, MGF, Mazda RX-7, and even Jaguar’s own X300, to understand what he means.

Paul added his own touches to the interior, although the dashboard is pure XJ-S – including the original barrel dials in the binnacle

The XJ-SS was available as a convertible only – Paul cut the roof off coupes and stuffed the sills with huge steel pipes. The majority of the original steel body was cut away and the new glass-fibre body fitted in its place, although in the case of the doors and bonnet the basic shell was retained to provide rigidity. It took Paul around three months to convert a coupe into an open XJ-SS, and he could modify any age or model of XJ-S in his Rochester, Kent, workshop. The car featured here is a 1987 3.6 manual (Jim Patten also tested one based on a 1990 V12 Le Mans, in the May).

The basic price to convert an XJ-S coupe in 1995 was £25,000 (a convertible was eight grand less) and that figure didn’t include the donor car. Expensive when you consider a brand-new BMW 320i convertible in the mid-Nineties was the same price. Little wonder Paul believes just 15 examples of the XJ-SS were produced, either fully finished in his factory or in kit form. On later conversions he added a four-headlight treatment, which does little to improve the already awkward looks. The project ended a couple of years after that when the recession of the mid-Nineties started to bite. “It was when the world had run out of money,” he admits ruefully. “The car was always destined to go nowhere.” Paul tried the same process again in the 2000s with an XK 180 copy based on a cut-down XJ-S chassis, but this, too, went nowhere.

After producing an Audi TT lookalike on the Metro chassis, he sold Autostyle in 2004, although remained in the automotive industry. He now concentrates on manufacturing replacement interior trim for Jaguars and many other marques, something he has done since the Eighties – in fact, he was one of the first to offer a round-instrument conversion for the pre-facelift XJ-S. Today, he’s philosophical about the XJ-SS. “I look at it now and think it’s a bit bulky, but I suppose it was quite good for the time.”

I had been looking for an XJ-SS for as long as I can remember, but with so few produced I had never managed to find one. And then, out of the blue, Andre Ling from Diss-based auctioneers TWGaze contacted me about a green example that was soon to be auctioned and did I want to see the car before it was sold? I didn’t need to be asked twice.

I’m not disappointed when I arrive at TW Gaze’s premises and set eyes on the XJ-SS for the first time. Although Paul never changed the XJ-S’ wheelbase, the car seems shorter because there are no bumpers, making it more compact than the donor vehicle. It’s obviously much curvier and I can spot influences of E-type and other Jaguars in its design, especially the bonnet bulge and rounded wheelarches. And I can’t get away from how much those Corsa-sourced headlights and that broad front grille make it look like an XK8. It even has similarly ovalshaped door handles. (Did Paul invent a time machine in his Rochester workshop?) To be honest, it’s not the prettiest of XJ-S conversions; there is too much bonnet for my tastes, while the Ford Mondeo-sourced rear lights dominate the back end and the tail is too long. It’s worth noting that this example has a TWR rear spoiler, which detracts from the car’s clean and simple lines, but, overall, its softer shape works better than the more-angular Railton Claremont that we featured in the September 2018 issue of JW. Unusually for a low-volume special, the canvas roof doesn’t sit too high when folded, either, and is certainly no worse than the XJ-S convertible. Held into place with pressstuds, the roof is simple and quick to erect and doesn’t ruin the car’s lines. Under the boot lid, the deep and fully carpeted storage compartment makes the car remarkably practical for something made mainly from plastic.

Paul added his own touches to the interior, although the dashboard is pure XJ-S – including the original barrel dials in the binnacle. Opening the doors reveals XJ-SS-branded treadplates, plus a large XJ-SS emblem pressed into the leather covering the rear bulkhead behind the seats. The seats themselves are Banham’s own and are huge. Although they are comfortable, offering plenty of support, the rounded headrests stand too proud of the car’s waistline spoiling its smooth profile. The 3.6 engine bursts into life the moment I twist the key in the ignition, sounding gruffer than normal due to the straight-through pipes. After clicking the five-speed into first, it is immediately obvious that the XJ-SS has a different feel to a standard car. As I squeeze the throttle, the engine is more responsive and the acceleration harder to 60mph.

It’s easier to throw around the narrow Norfolk roads, too, and not just because of the extra grip from the larger rims. Feeling more lithe, it takes corners with a greater aggression than in standard guise. The reason for that is simple – the lack of weight. Although it’s unknown what the XJ-SS weighs, losing its roof and most of the steel bodywork greatly affects the car’s character. Paul agrees when I tell him my thoughts on the car.

“Every time you remove something off the original XJ-S, whether it’s the doors, the boot or the bonnet, you’re removing hundreds of pounds off and it’s suddenly a heck of a lot lighter.”

Despite the extra strengthening that Paul added to the sills, the XJ-SS is far from perfect, and a considerable amount of shake is made more prominent by driving on Norfolk’s roughly surfaced roads. This makes it feel older than even this example’s date of registration suggests. As if it’s something from the Fifties, a C-type maybe. I know how crazy that sounds, but the car’s character has been altered so dramatically that I’ll stand by that statement. And to drive an XJ-S that feels more like a Fifties racing car was the very last thing I was expecting.