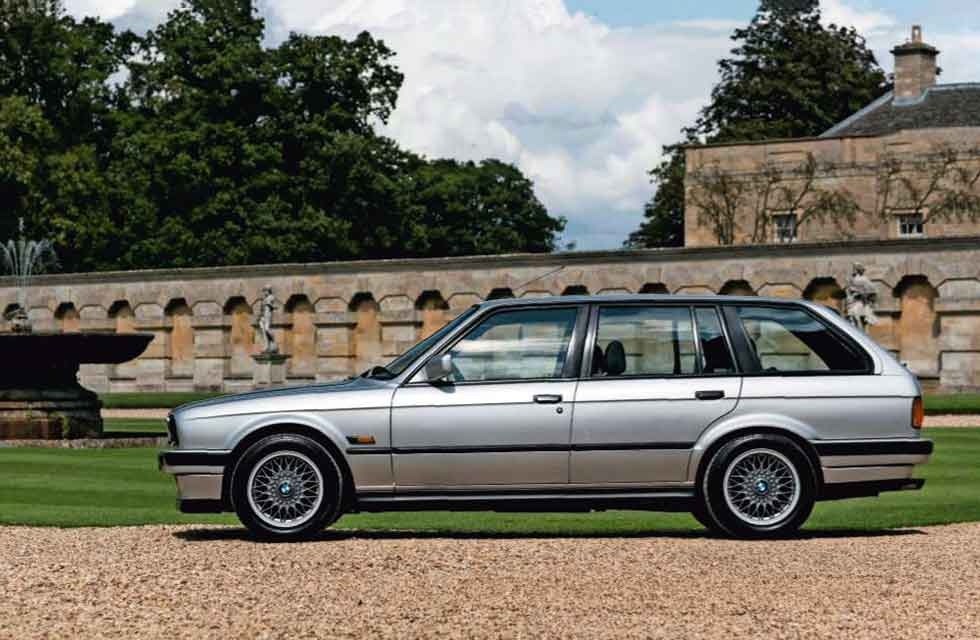 The driver’s choice. You’d never guess that such a slick design was born in a shed.

These days a BMW 3 Series estate is about as special or as alternative as professing a fondness for Coldplay while you sup a Starbucks latte. Back in the 1980s, however, possession of a BMW keyfob marked you out as a thrusting go-getter. Well, that was the legend anyway, even if there wasn’t much thrust in a 316 automatic. You needed a six-pot Beemer for that – and a willingness to compromise. If you needed an estate car, the E30 Three was not the most capacious choice, but then it really didn’t need to be. The 3 Series Touring was – and still is – a lifestyle choice. There’s room for a couple of spaniels or a pushchair, but little else. Only the space-saving design of its semitrailing arm rear suspension saved it from being even more limited.

The Touring was actually born of frustration. BMW employee Max Reisbock was annoyed that he couldn’t fit his wife, two kids and all their stuff into a 3 Series for a holiday, so he decided to build an estate version in his shed. Using a totalled 323i, he moved the C-pillar back, added the windows from a two-door E30 and fabricated the missing panels. With a budget of around seven grand (in today’s money), he had a working prototype in six months. The BMW board loved it, giving it the green light with only minor changes.

‘IF YOU’RE A DYED-IN-THE-WOOL BMW HATER, THE 325I MIGHT JUST TURN YOUR HEAD’

Oozing style inside and out, the production car belies its Heath Robinsonish origins. The beautiful leather chairs, the driver-focussed dash, the red-lit instruments – it all has that subtle coolness nailed by BMWs of this era. The exterior is just as pleasing. Some estates struggle to convince in the transition from saloon but the 3 Series Touring arguably looks more resolved than the 4-door, almost as if the E30 started off as a wagon. Top marks to Herr Reisbock.

Our car is the top of the range 325i, powered by the M20 engine (here in M20B25 form). This lusty, grunty engine has passed into legend as one of BMW’s true greats, howling and then screeching as you soar to 7000rpm, but with more than enough mid-range muscle to slingshot past dawdlers. It’s not a race car – it’s too well damped for that – but it is exciting. If you’re a dyed-in-the-wool BMW hater (we know you’re out there), and can’t quite understand how BMW gained such a reputation for ‘balance’, the 325i might just turn your head. The rear suspension may not be the most sophisticated, but the way the rear digs in as you power out of a corner can’t help but bring a smile. The steering is well weighted, and though it’s fairly slow in operation, it manages to feel cohesive, planted and solid while still maintaining a sense of excitement and vibrancy.

My short spell in this E30 is bitter sweet. It’s highly unlikely that new non-M BMWs will ever feel this connected in the future, and that is such a shame for a firm that was once proud to produce the Ultimate Driving Machine. The 325i is a glowing reminder of a time when BMW not only made cars that combined mainstream practicality with petrolhead appeal, but when they also employed people whose shed miracles could become realities.

Not the roomiest, but one of the smartest.  Reisbocks’s design was all about function. E30 Tourings rot hard in the boot area. M20 six: one of Munich’s greatest engines. Has there ever been a better dash, really?

I BOUGHT ONE PAUL/JON SKEWS

The excellent BMW 325i E30 you see here was brought along by Paul Skews (pictured), but it belongs to his son Jon. ‘I love everything, the sound, the way they drive,’ says Jon. ‘With the E30s you feel a lot more connected with the road. I bought it three years ago and back then everything was available. Now certain parts are no longer available. If there’s a demand BMW will make them, so nothing’s completely gone. A computer tells BMW it needs make more. I’m thinking of stroking it to 2.8-litre and turbocharging it. It’ll look original but have a lot more oomph.’