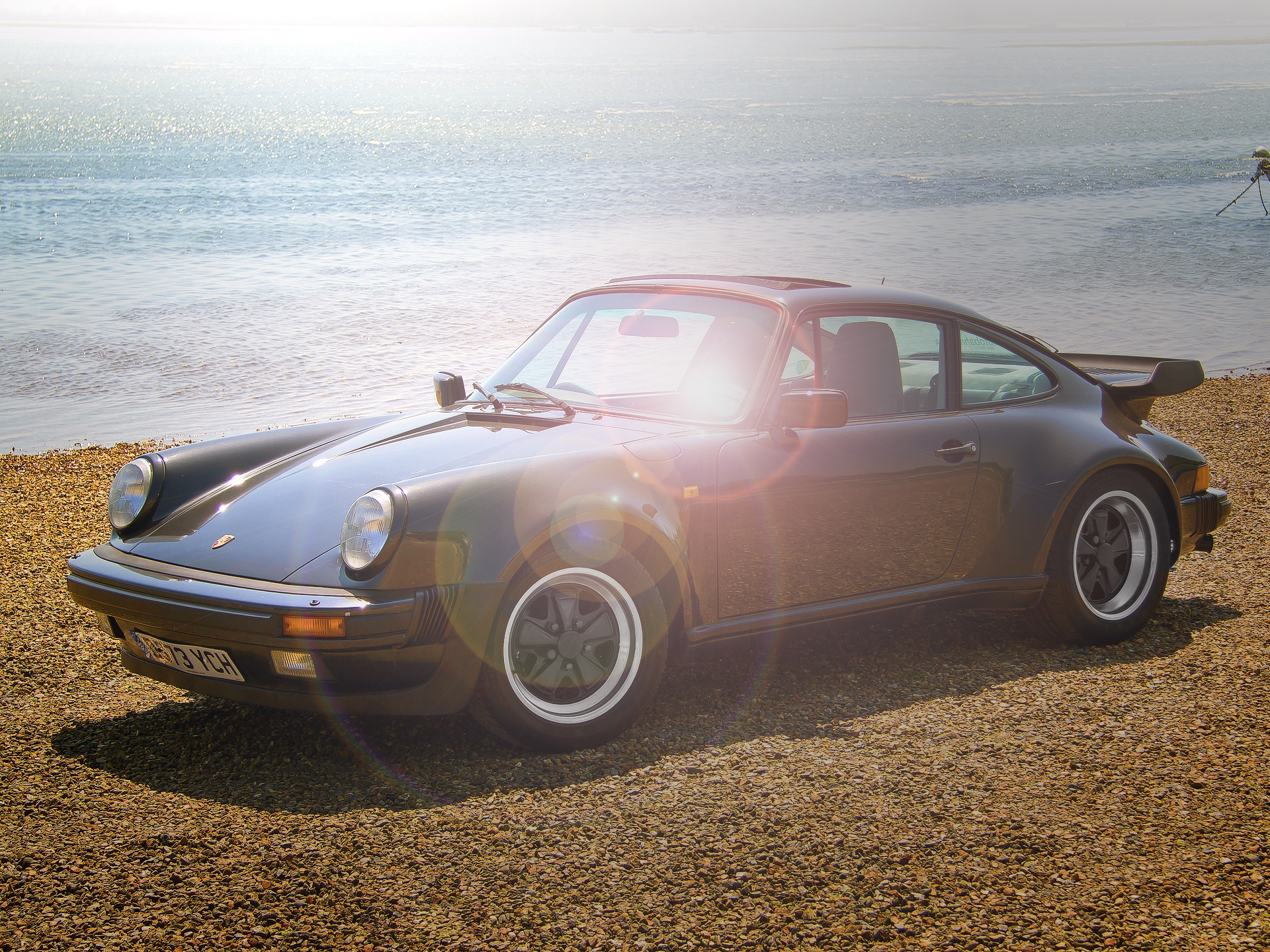 New era Carrera. Porsche now offers a turbo-bodied Porsche 911 Carrera 930. We tried the SE version of 911 930. Porsche 911 production is now in its 22nd year (at 1986 – Drive-My remark), a feat few current models can boast. The shape has remained virtually unchanged over the years and is almost timeless in appearance, elegant in basic 911 guise, and undeniably aggressive in ultimate 911 Turbo specification. Slotting in between these are the new 911 Carrera Coupe (930 re-new at 1986), Targa, and Cabriolet models with Sport Equipment – SE.

To the casual observer, the 911 Carrera Coupe SE could easily be mistaken for the 911 Turbo, save for the Carrera badging, as both cars appear outwardly identical. For the first time, Porsche is offering the normally-aspirated 3.2-litre Carrera engine with the body, front and rear spoilers and running gear of the Turbo, the wide-winged shell also being available in Targa or Cabriolet forms. 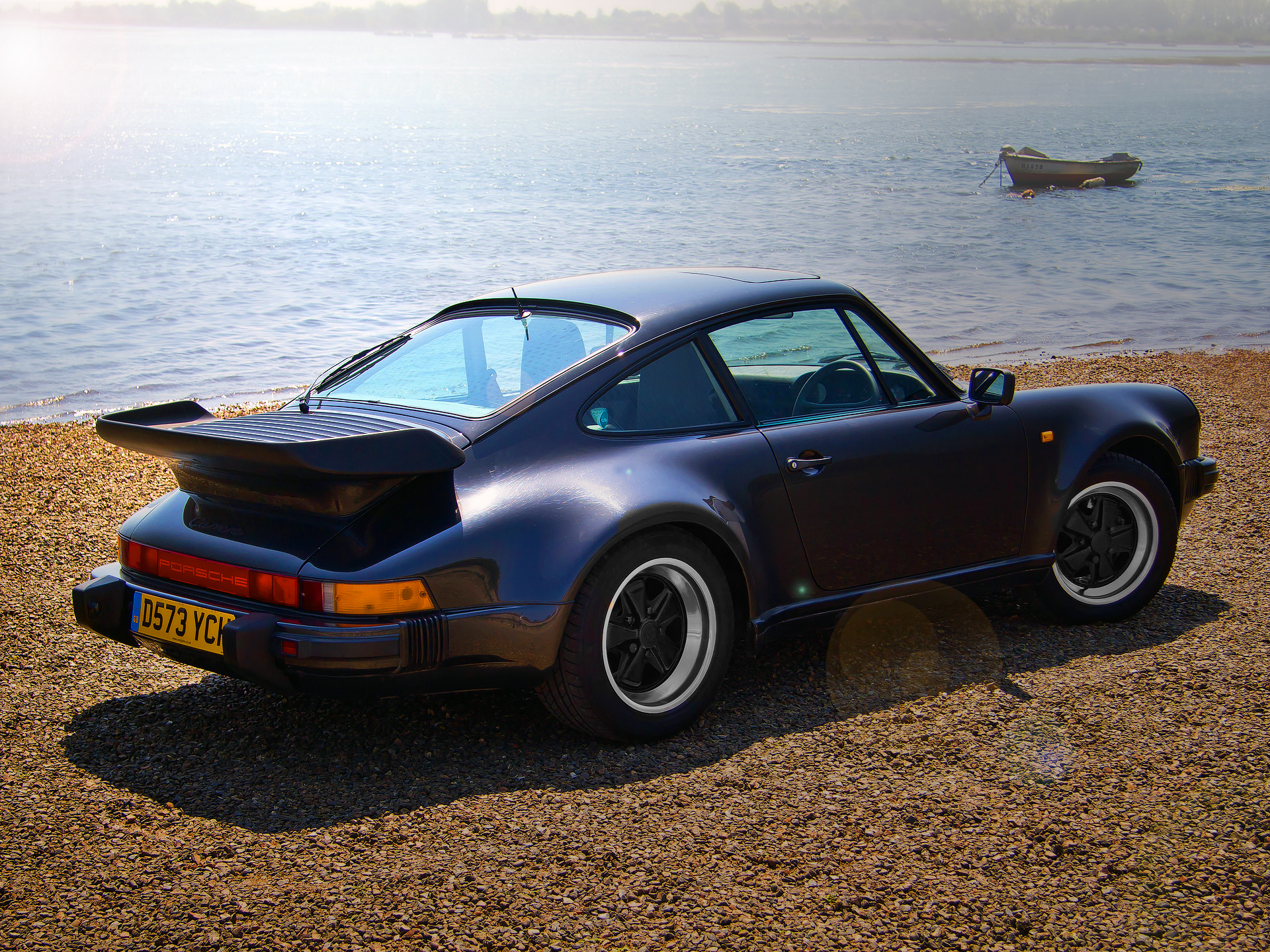 Coinciding with the ‘re-shelling’ operation are detail changes throughout the entire 911 range. These include larger vents for the revised heating and ventilation system and more precise temperature control achieved by fitting the heat sensor on top of the dashboard rather than above the windscreen. Front seats are now 20mm lower, to give tall drivers more head and legroom around the steering wheel; there is also slightly more aft adjustment and electronic height control. New sun visors, interior-matched load compartment carpeting, and a more powerful screen wash system are also incorporated.

In many ways, Porsche has created in the Carrera Coupe SE a car that makes more sense than the Turbo; it looks the same, costs some £5000 less, and certainly develops” enough power to keep most drivers happy. It is also a more responsive package, since it suffers none of the drawbacks in drive ability of the turbo car.

As ever, it is the performance and engine flexibility of this Porsche that impresses. By slotting a large capacity engine into a relatively lightweight, compact shell, performance is impressive. Porsche has engineered commendable flexibility into the lightweight, horizontally- opposed flat six which, in its current specification, is of 3164cc displacement, develops 231bhp at 5900rpm and 210lb ft torque at 4800rpm.

In reality most of the available torque can be tapped off as low as 2000rpm. A clue to this is revealed by the acceleration figures from 20mph upwards in fourth gear. Each of the 20mph increments is covered in a similar time of six seconds up to 110mph. When you are behind the wheel on a private test track, this all seems so matter of fact, but in traffic the exceptional pick-up becomes more obvious.

However, it is the standing start acceleration runs which really put the available power into perspective. With the majority of weight over the rear wheels and with massive Dunlop D4 rubber supplying copious amounts of grip, the initial launch is impressive, to say the least.

You can run off a set of acceleration runs, reaching 60mph in 6secs dead, without any real problem, as only one gearchange is required along the way. However, to get anywhere near the 5.4 secs 0-60mph recorded for the previous Carrera, tested in December 1983, involves a more polished launch technique.

In the end we found it best to let the clutch out while increasing engine revs from 5000rpm to 6000rpm, rather than hold engine speed at 5700rpm. This technique realised the best acceleration runs, with a 0- 60mph time of 5.6 secs and 0-100mph in 15.8 secs. Though slightly adrift from the previous figures, they are probably a true representation, bearing in mind the increased kerb weight of 2780lb compared with 2569lb for the previous Carrera. It is also worth noting that the two test weights differ quite markedly: 3278lb compared with 2948lb.

Acceleration figures in the gears are impressive enough, but again, clearly inferior to those recorded by the previous Carrera. As a result, though the more sports-orientated packaging looks the part, performance has suffered slightly due to the increased weight.

The mean maximum speed of 148mph (149mph best) is also less than the previous 150mph figure, partly a reflection of the increased weight, partly the change from Pirelli to Dunlop tyres. The rolling diameter of the latter is slightly less than the earlier P7s with the effect that gearing is now slightly lower.

Slight deficiencies in performance are really quite meaningless once on the road because one never really gets the chance to drive the car to the full — there is simply more than enough power instantly available under one’s right foot to satisfy most driving styles.

It is at autobahn cruising speeds that the Carrera feels particularly at home. The natural cruising rate is around 90mph; at this speed engine revs are 3900rpm in fifth gear and the power unit feels barely stressed. At 70mph, revs drop to 3000rpm, the constant, sometimes irritating, fan whine subsides, and the characteristic deep exhaust beat is more subdued. Floor the throttle, however, and that note changes to a howl which is unmistakably Porsche.

To the enthusiast, it is a joy to the ears, although it is perhaps more of an unnerving experience to the less enthusiastic.

Lengthy motorway trips pose no real problem if one can make good progress and use the available power output; however, the Carrera is – the most refined of cars. It is certainly good by sports car standards, but someone expecting the same interior – refinement as, say, a Renault 25 or new Ford Granada (Ford Scorpio, 1986 – Drive-My remark) would probably find the Porsche disappointing. In this area the distinctive two-plus-two shell is showing its age. It is not wind noise that detracts — this is well controlled right up to 100mph — but road noise through the wide-foot-print tyres, especially on concrete surfaces, and body boom at around 80mph which can become tiring to the ears. There is also considerable bump thump to contend with.

Considering that the car rolls on ultra-low profile 45 series 245VR16 rear tyres and 55 series 205VR16 fronts, the ride is impressive despite the undoubtedly stiff sidewalls — and it gets better at speed. The excellent ride quality has not been achieved at the cost of overall handling either, which remains impressive, if a little quirky, on the limit.

As ever, one has to treat this latest version of the 911 with a certain amount of respect bearing in mind the extreme rearward weight bias. The tail can easily be provoked out of line on a trailing throttle and especially so at speed on a wet or slippery surface. This point was illustrated while exiting a deserted section of minor road round a 90 deg left-hand bend.

With only partial throttle applied and the car in first gear, in a front-wheel drive car you might expect a minor loss of grip which is instantly recognisable as wheelspin as revs rise; in the Porsche, however, the rear end completely lets go, sending the car into a 180 deg spin at only 5 to 10mph. Once aware of the handling limitations — and in the dry they are at a level one is unlikely to find, even when driven at an enthusiastic level — the Carrera is a most satisfying driver’s machine.

The four-wheel disc brakes, cross-drilled for additional cooling and with the word “Porsche” carefully cast into each calliper, are in themselves a work of art; it is, in fact, this meticulous attention to detail that a customer is undoubtedly paying for. The brakes themselves are adequate in bringing the car to a halt quickly and safely, a point indicated by the response tests, where we found a pedal effort of 80lb would produce 0.95g in damp conditions. The fade tests, however, showed less favourable results with pedal pressure rising from 35 to 35lb on the initial 0.5g stop to 35-100lb by stop seven and showing no sign of recovery up to stop 10.

Our punishing test session netted a fuel consumption figure of 16.3mpg, which was easily bettered on the drive home at 20mpg, and later improved on still further with a best of 22.4mpg. Our overall figure of 19.2mpg covers a range of driving styles, from prolonged full throttle acceleration to high-speed motorway cruising and round-town driving.

As one might expect from a car that has been refined mechanically and cosmetically over the years, the driving position is almost faultless. The offset and bottom-pivoting pedals take time to adjust to, but overall the relationship between wheel, seat, gearchange, and pedals is excellent. Heel and toe changes are easy and the lever itself precise, if a little notchy on first acquaintance, though one might expect this considering the long gear linkage.

The only aspect that feels wrong is the gear knob. It is small, plastic and very ordinary looking; one might have expected a more comfortable, and chunky leather-covered gear knob, but if it were bigger it would almost certainly make contact with the driver’s knee when in fifth gear.

The dashboard layout is dated but nevertheless extremely functional, and we wouldn’t change it. A driver gets all the information required from the large circular instruments, with the tachometer occupying the central, most important position. Switchgear includes twin stalks, the left one for indicators — main beam and the right one for wash/wipe. If the latter is pulled towards the driver, the wash/wipe facility is activated and the harder one pulls the faster the wipers travel, a detail touch one soon learns to appreciate when encountering filthy conditions at speed.

The “business like” interior is complemented by the smart, restrained seat trim, featuring dark cloth fabric over the seat base and backrest and leather on the other areas. Rear passenger space for full-size adults is a joke as before; far better to use this as storage space additional to that provided by the limited under bonnet compartment and split rear seat arrangement.

In performance terms, the new Carrera SE is perhaps a little dis-appointing though there is no denying that the car is still devastatingly quick. To the Porsche enthusiast who harks back to the days when Carrera meant pure, raw power, then this Porsche is likely to disappoint; as a more refined, drive able package, however, the new Turbo-bodied car is likely to win favour.

Handle with care: 911’s extreme rearward weight bias can catch out the careless driver unused to the car, particularly in the wet.

Figures taken at 1600 miles by our own staff at the Motor Industry Research Association proving ground at Nuneaton. All Drive-my test results are subject to world copyright and may not be reproduced in whole or part without the Editor’s written permission.