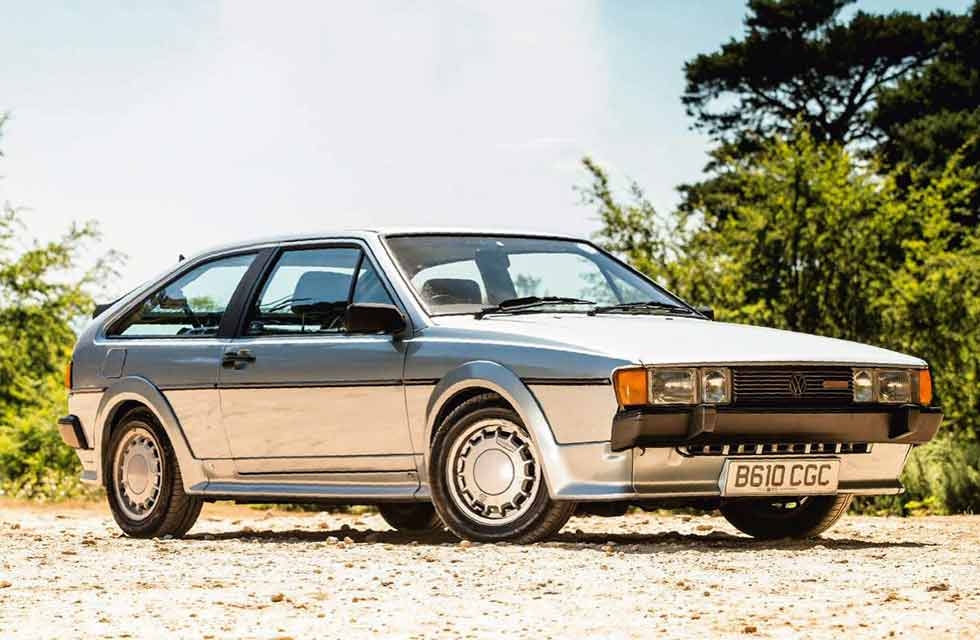 Volkswagen’s perfect Storm. This luxury Dub is still a GTI at heart yet can be yours for half the price. Second-gen Sciroccos offer an affordable way into classic Dub ownership and the rare Storm is cream of the crop. Words Martin Domoney. Photography Adam Shorrock.

GO DOWN A STORM ENDANGERED SPECIES

With just 47 Volkswagen Scirocco Storms left running on the UK’s roads, we take a look at why those that remain deserve to be cherished.

Back in the 1980s, image was everything. The badge on your car combined with the number of exhaust pipes and lip spoilers told the world just how much of a young, go-getting man- or woman about- town you were. The sleek and sporty Volkswagen Scirocco was aimed squarely at this yuppie demographic, except they mostly ignored it… This coachbuilt coupe was expensive and most of the upwardly mobile fell for the more instantly accessible charms of the slower and cheaper Golf GTI instead. The top-dog (apart from the ten left-hand drive 16Vs imported) was the Scirocco Storm, which re-joined the line-up for 1984 only. The Storm badge had previously been seen on a luxury UK version of the MkI Scirocco, and the MkII carried on the tradition. It cost £1200 more than the range-topping GTX at £9795.99.

Numbers were limited to 600 – 300 in Havana Brown, and the other half in Cosmos Blue. Rare in their heyday, and even rarer now, they survive in tiny numbers. Let us show you what you’ve been missing before they’re gone forever.

Approaching the Storm evokes all sorts of thoughts of how the new owner of one of these cars might have felt doing the exact same thing back in 1984. VW designed the MkII Scirocco in-house, yet like its Giugiaro-penned forebear it still manages to look both angular and chiselled while retaining a sleekness that would certainly make passers-by do a double take. The rear window-mounted wing, designed by Zender along with the bespoke Storm bodykit, would definitely have raised an eyebrow back in the day. A big rear wing? On a front-wheel-drive car? And it’s on the glass? Welcome to the 1980s, baby.

Except that the Scirocco is really a product of the previous decade. Underneath those seductively sharp Herbert Schäfer-penned lines lies the beating heart and chassis from a MkI Golf GTI. First revealed in 1982, the MkII Scirocco, or Type 53 as VW designated it, catapulted the coupé into the public consciousness – here was a Capri rival without the connotations of leather-jacketed, B&H-smoking alpha males. In the same way the Golf moved the humble hatchback from mere shopping cart to must-have suburban conveyance, the Scirocco appealed to a very different clientele than your average Capri or Manta buyer. One that demanded a little more quality.

They got it too. For this lovingly looked-after Stormhas that trademark VW door clunk that instantly sets the tone. Inside the Scirocco lies more period styling. A deeppile blue carpet that even extends to the boot, a blue dashboard and yep, blue leather seats (all Storm-specific additions and brown in the 300 Havana-coloured Storms), which suit the car’s personality. Settle into those posh pews and there’s a great view out of the green-tinted glass. Take a look in the mirror and that huge spoiler looms large. Gripping the sporty four-button steering wheel, my eyes are diverted to the busy instrument cluster and its on-board-computer digital display – perfect for seeing what MPG you got on the way to that Gary Numan gig. I close the door while muttering ‘just like a Golf’ and fire up the Scirocco, pointing it into the deep Surrey countryside. I struggle to see why these cars weren’t given as much love as the Golf. Piloting it has that early VW hot-hatch vibe, but it feels a bit more special. The Storm models got a load more luxury and toys than a stock GTX with the same engine. Electric windows and an aerial plus a stereo cross-fader and the aforementioned leather all upped the opulence but also the weight. The bodykit and spoiler do make up for this a little, reducing the drag coefficient to a pretty decent 0.38cd.

The Storm’s 8-valve motor, nicked straight from the Golf GTI, is still a proper goer. Even with the Storm’s extras to carry around it’ll still allow 0-60mph in 9.6 seconds. On paper it isn’t the most powerful engine, but the mid-range surge from burying the throttle in the deep shag has me beaming. Gears are slightly stiff to select, and first and second seemingly hang out over to the passenger side’s door pocket, but once you’re used to the pattern it’s a joy to chop up and down through the keenly spaced ratios.

Pushing on through the leafy tunnels and sweeping bends, the car’s performance bloodline is evident in the handling; it lets you know about bumps and deviations in the road surface, and eggs you on to throw it into corners faster and faster. Its suspension is firm and the 14in bottletop alloys (another Storm-only addition)wear relatively low-profile rubber; interior trims creak and rattle if you clip a crumbly road edge mid-turn, a reminder that Sciroccos were Karmann-built rather than VW. Its nose tucks in willingly at near enough any speed, and the Storm far outperforms my ability to unsettle it. The brakes are numb, and the pedal needs to be provoked hard to get any real stopping power.

‘THE 8-VALVE MOTOR, NICKED FROM THE GOLF GTI, IS A PROPER GOER’

A buzz emanates from the dashboard as the rev needle rushes toward redline, but in truth that’s not where this engine pleases. This eager four-pot loves to pull through its power band before shifting up as torque drops off. Mid-range punch is a big part of the fun. Combined with well-honed suspension and period-correct (if vague) brakes, the Scirocco still makes any spirited driver want to spend more time with it. It’s just a shame that there are so few left and opportunities are scarce.

It’s sad that the Scirocco hasn’t enjoyed the same hype as the Golf from the same generation. The coupe is every bit as worthy, and really encompasses what cars were all about at that time. Its styling is daring without being brash, and the driving experience is fantastic. The Scirocco Storm is such a well-assembled package; it just seems to have a bit of everything that gets people excited about cars from this era. Add this to the knowledge that it was pricey when new, plus you’re highly unlikely to ever meet another Storm coming the other way out on the road, and you’ve got a car with a very exclusive feel. I definitely get why people who are into Sciroccos are into them so much, and it’s a pity that more people dismiss them.

While it’s a shame that hundreds of prospective owners have missed the boat on this car, it’s all the sweeter for the savvy enthusiasts that snapped one up when they were pennies and still enjoy them today. If a good one comes up for sale at reasonable money and you’re after a do-it-all classic that’s only going to get more valuable, buy it. You won’t regret it.

Better driving position than any Golf GTI. Zesty MkI Golf GTI motor. 14in alloys bespoke to the Storm. Chance to save Martin’s Level 42 tapes from the attic. Just 300 built in Cosmos Blue. A golden year: Live Aid, anyone? The chaps who built the Scirocco. Still going like a Swiss watch. Squishy seats are surprisingly supportive. Short-ratio ‘box needs adjusting to. Herbert Schäfer-penned lines are bang on trend.

I BOUGHT ONE STEWART APPS

‘I bought my Storm in 2011, because I wanted to relive my youth! When I got it the dampers were leaking really badly, so I fitted Bilstein replacements with 30mm lowering springs, which I think makes it look just right.

‘I’ve also fitted inertia reel belts in the back so I can take my kids out in it safely. We go for days out to the coast in the Scirocco whenever we can, as well as attending Scirocco Register (sciroccoregister.co.uk) meets and shows. It makes me feel 21 again; I just love driving it!’