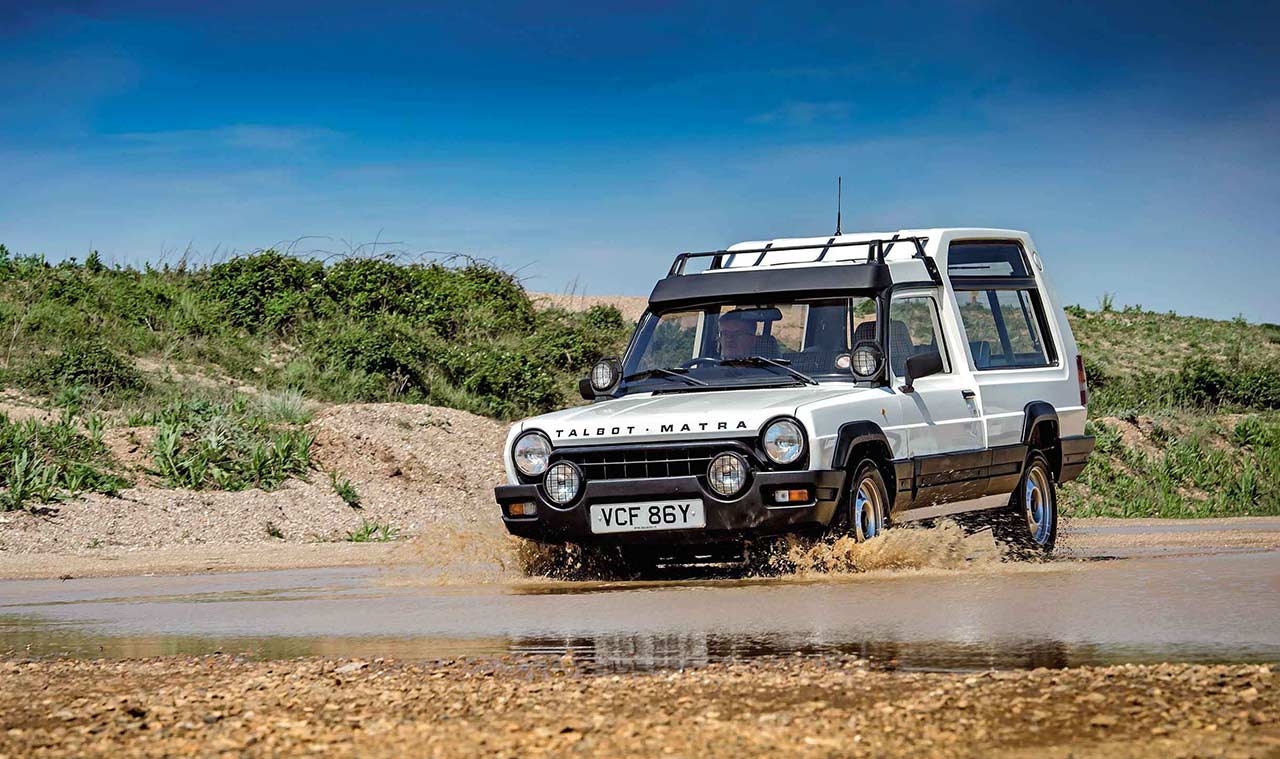 By the time they’re ten, most cars are either dead, or dying. A decade into its life, the 1967 Simca 1100 definitely was. This small, French, front-wheel-drive hatchback – think Volkswagen Golf, seven years before Giugiaro’s spectacular rescue of VW took off – had one year left to run, ending an unexpectedly stellar career as Europe’s onetime best-selling car. But there was one more flourish to come.

It came literally off the back of the commercial version. There was a Simca 1100 van, really an unglazed, three-door version of the 1100 estate, but there was also a pick-up, of modest capacity but useful enough to sell in decent numbers before Suzuki and Toyota demonstrated how to make a proper low-budget, separate-chassis, heavy-duty beast of burden.

This is what provided a platform upon which Matra, French aerospace company and sometime car manufacturer, built one of Europe’s first crossovers. Not that anyone knew what one of those was 40 years ago. Instead, the Matra-Simca Rancho was seen as a strangely appealing fraud. The fraud was that it looked like a rugged four-wheel-drive – what with its big wheels capped with black arches, its chunky bumpers, its American cop-car bulkhead spotlights, its roof rails and safari-glazed, giraffe-spotting cabin – only it wasn’t.

It had a raised ride height, strategic strengthening to its undercarriage, an optional winch and the demeanour of a machine in which to adventure. Yet in a mud-wrestle with authentic four-wheel-drives it was always going to be the tow-ee rather than the tow-er.

But that styling… It was the work of Matra’s Antonis Volanis, who also designed the Matra Bagheera and Murena sports cars, and the first Renault Espace. The Rancho made the Defender, the Jeep Cherokee and the Mercedes G-Wagen look faintly quaint. It had the air of a junior Range Rover – or La Range, as Britain’s fashionable four-wheeler was colloquially known in cosmopolitan Paris – for a fraction of the price.

And it was useful. To the Simca’s flatbed rear had been grafted a modernist cabin extension that provided length, height and a certain bearing. The long, slide-open side windows were complemented with lateral skylights. The Range Rover-style split tailgate provided fabulous access and a platform for le piquenique. And the recess for the rear wiper arm, and the Range Rover-style separate-lettered name badging, added just-so utilitarian class.

Rather surprisingly, the cleverly named Rancho wasn’t completely useless off-road. The standard Simca 1100 hatch sat higher than a modern Focus or Golf equivalent, and came with the supple, long-travel suspension that characterised French cars of the day. The Rancho rode higher still, and, despite the bulk of its enlarged cabin, was less likely to bog than might be expected, because said cabin was fashioned from lightweight glassfibre.

That was the work of the automobile division of Matra, born when it bought René Bonnet’s sports car business in 1964. It made Matra the producer of the fabulous little Djet, a slender, rear-engined, glassfibre-skinned challenger to the Alpine Renault. The Djet’s evolution would eventually lead to the three-abreast Matra- Simca Bagheera and the pretty Talbot Murena, but that’s another story.

What the Rancho and Bagheera had in common was Simca’s energetic four-cylinder pushrod, iron-block, alloy-head 1442cc motor, in this instance producing 77bhp and 88lb ft of torque. That may seem far too bijou to propel a machine of the bulk and frontal area of the Rancho, but the motor had verve and far less weight – 1129kg – to shift than a modern equivalent. It was a bored-out version of the 1100 hatch’s 1118cc motor, itself a stretch of the 944cc unit found in the rear end of the boxy Simca 1000 saloon. All versions shared camshaft followers with balsa-like durability, most Simcas announcing themselves several hundred metres before arrival by sounding like a cutlery drawer in an earthquake. Yet that didn’t seem to affect the engine’s capacity for hard work and long life.

The Rancho’s suspension was less roughedged. A pair of long, longitudinally mounted twist-action torsion bars suspended the frontend’s double wishbones, a similar pair of transverse bars springing the back end’s trailing arms. When the Rancho emerged, the Simca 1100 had already had its one major facelift, most of the money spent on a new dashboard presenting crisply marked instruments, a toploading glovebox, a new steering wheel and gearlever knob – big stuff, back then – and wipers controlled by stalk rather than switch. All of which meant the Rancho’s dash wasn’t entirely out of kilter with its step-ahead exterior.

Matra bravely launched it in 1977 on mud and road in the hills behind St Tropez, where it acquitted itself to better effect than expected. A few years later Matra produced a Grand Raid version with a front-mounted winch and a limited-slip differential, a Découvrable version with opening rear side panels, and an upmarket model with alloy wheels and metallic paint (wow!) called Rancho X. There was also a three-row seven-seater, which the engine must really have struggled with when it was fully loaded.

One-up aboard this well-preserved, lowmileage Rancho, those 1442cc feel quite peppy at low speeds, aided by low gearing. Amazingly, this example’s cam-followers don’t seem to have done much crumbling yet, the motor smooth and relatively quiet. Equally amazing is that the gearbox, with its Porschedesigned synchromesh, still allows you to engage second without a cog-clashing crunch, which is seldom the case. Your reporter knows all this because he’s previously owned five Simca 1100s, two of them faintly sporting.

So this Rancho feels semi-familiar if not completely so, what with that glassfibre shed perched threateningly out back. Yet the Matra doesn’t feel tail-heavy or wanderingly wayward. Nor is its steering especially heavy, despite all assistance to the rim being bicep-sourced. Understeer? It will, although you’ll need to be going at a mildly reckless pace to find out.

More surprising is that it doesn’t heave-to like a dinghy rounding a buoy. Or not when it’s empty, at least. You can get along briskly enough to keep up – just – with modern cars, while enjoying a squidgily comfortable seat and marvelling at stalk controls as skinny as chopsticks. The interior feels narrow in 2017, although it didn’t 30 years ago.

So, is it good to drive? Its comfort, grip and the view out provide a hint of the experience that many of us enjoy in a modern crossover. And, like most old cars, it provides the feeling that you have charge of a live mechanism, if a slightly rubbery one. You’ll get pleasure, too, from musing on the fact that this car foretold the mass-market demand for more space, more versatility and slightly higher-altitude interiors.

This ultra-rare Rancho survivor has spent much of its long life providing transport for a wheelchair-bound owner, the rear end neatly converted to provide a lift and floor-space to house both occupant and mobility device. Despite this, the folding rear seat remains intact, demonstrating just how much space there is in a Rancho. Look rearwards from the driver’s seat and you stare into a boxy cabin spilling with daylight, much of which pours through those skylights. The Matra isn’t short of provision for artificial light either, the headlights supplemented by a pair of gloriously over-sized long-range spots housed within the moulded front bumper, and the rather pointless but point-making swivelling duo mounted just ahead of the A-pillars.

Never mind the front-drive mechanicals – the Rancho looks like a machine for adventuring. If your quest were to take you along rough tracks, or six-inch deep mud, or through terrain to which you could lash a winch cable, then the Rancho could probably get you to the end of the trail.

But what the Rancho is better known for today is that it ventured into largely unexplored market terrain, its half-car, half off-roader composition a precursor to modern crossovers. Not that Matra and Talbot, as Simca became in 1978, was aware of that at the time. Instead, the Rancho was an ingenious means of keeping Matra’s low-volume Romorantin factory busy. It was a good call: the high-riding Rancho sold around 57,000 units over seven years.

Talbot itself, however, was doomed. The relabelled rump of Simca and the Rootes Group/ Chrysler UK business, bought by Peugeot in 1978, was on a fast-track decline. This was despite having two recent Car of the Year winners in the form of the Alpine and the Horizon, the latter replacing the ancient 1100.

Along with the slinky mid-engined three-seat Talbot-Matra Murena, the Rancho was the finest chunk of hardware to emerge from this hastily reborn, once-famous brand. Of the two the Rancho is now by far the rarer. The example here is surely one of the fittest of its kind, its condition good enough to warrant returning its rear-end architecture to original. It’s a classic of considerable usefulness, and one that wears an appealing aura of utility cool.

THANKS TO Anglia Car Auctions, www.angliacarauctions.co.uk.

‘THE COMFORT, GRIP AND THE VIEW OUT PROVIDE A HINT OF THE EXPERIENCE THAT MANY ENJOY IN A MODERN CROSSOVER’

Below and right Brochure shots suggest the Rancho was at home on the range. The reality was a van with raised ride height and glassfibre rear quarters, but the concept was years ahead of its time. Above and left You don’t have to explore every cliff edge in a Rancho, but utility is very much its thing. Think space and light rather than mudplugging supremacy, however. Above Rancho passes a parked Discovery. Wonder where Land Rover found its inspiration…